Excalibur #15: X of Swords Chapter Twenty-One is a Crazy Penultimate Setup for a Massive Battle 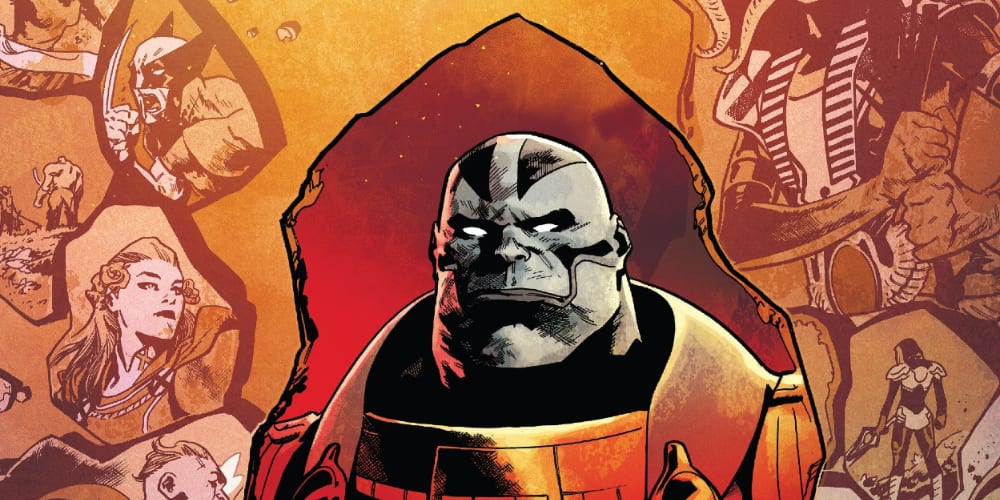 At the end of Chapter Twenty, Apocalypse’s wife, Genesis, put the Annihilation helm back on her head—once again giving her an unquenchable thirst for destruction. As a result, Apocalypse and his fellow Krakoan champions are the only ones holding the line between the Amenthi Horde and the Starlight Citadel. To complicate it even more, there are only six of them, since Captain Britain and Gorgon died and Cable is in bad shape. So, while Cyclops is planning a rescue back in Krakoa, the champions spend Excalibur #15: X of Swords Chapter Twenty-One in a desperate fight to stay alive. But there might be a few miracles along the way.

As of Excalibur #15: X of Swords Chapter Twenty-One, the Tournament is Over 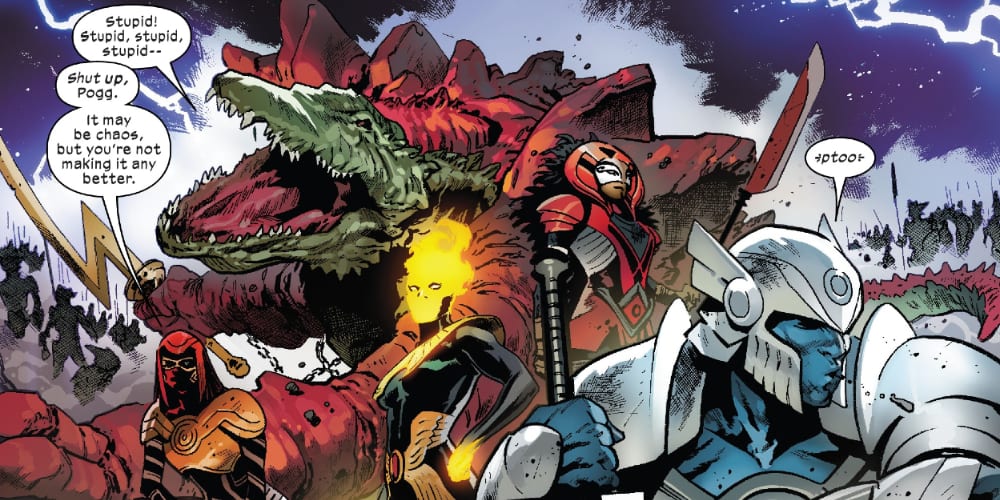 The tournament isn’t just over—Annihilation abandoned it completely. The entire point of the tournament was to prevent the Amenthi horde from invading the Starlight Citadel. However, Saturnyne knew that this was, at best, a stopgap in the Arakkii warriors’ plans. And the fact that the Annihilation violated the rules doesn’t sit well with the Krakoan warriors, especially Captain Avalon—Brian Braddock, the brother of Elizabeth Braddock, AKA Captain Britain. As he sees it, his sister died for nothing. Magik and Cypher also point out that Gorgon and Rockslide also died for nothing.

But there’s not a lot of time to debate tragedy. The X-Men in Otherworld spend most of Excalibur #15: X of Swords Chapter Twenty-One in full retreat. The seven of them need several miracles to make it out of this alive. But, fortunately for them, the miracles start coming.

First, Some Small Miracles That Might Turn the Tide—But Not By Much 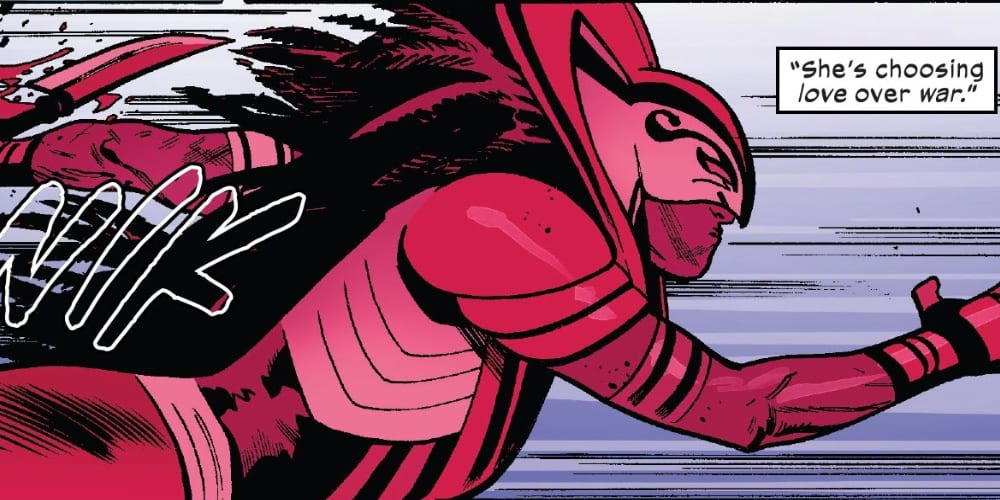 She’s about to Rick Roll the X-Men in the best possible way. (Image: Excalibur #15, Marvel Comics)

While Krakoans are united, even if they have disagreements, the Arakkii are confident, but they are far from united. First, the White Sword of the Citadel takes his 100 warriors and bounces. He’s like, “Nope. Not what I signed up for,” even if his side is winning.

But the best changes to the Arakkii is when Bei the Blood Moon abandons them to go back to Doug! She’s actually in love with him! Of course, when she meets up with the X-Men and reunites with Doug, she blasts his teammates with her doom note and takes off with him over her shoulder. This separation doesn’t last long. Before the end of Excalibur #15: X of Swords Chapter Twenty-One, Doug convinces her to join the X-Men and battle the Amenthi Hordes. It’s the way all classic romances start. 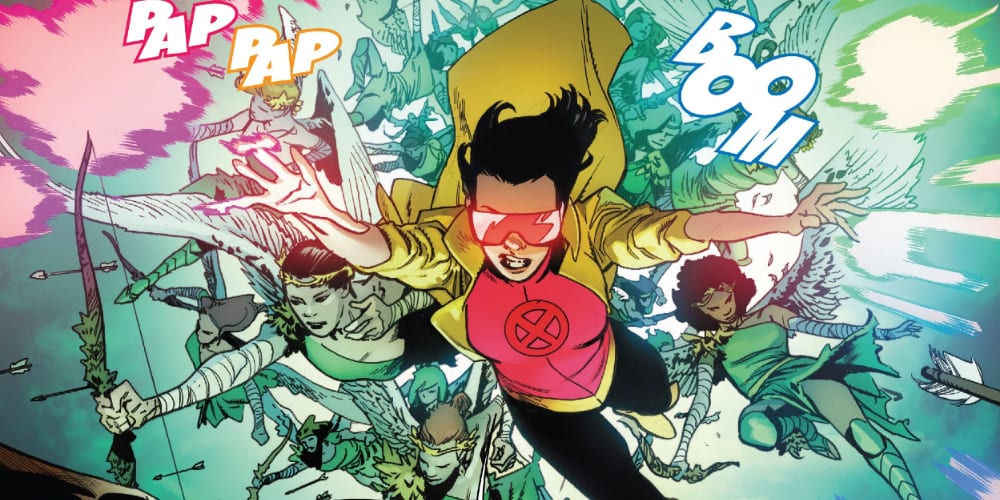 Jubilee has never looked like such a badass angelic being before. (Image: Excalibur #15, Marvel Comics)

The White Sword ditching his fellow champions and Bei defecting to the X-Men might be small miracles, but the big one is thanks to one angry mother. And not “mother” as in “mother—-r,” but as in an actual mother. For a while now, Jubilee has been hanging out with the Priestesses of the Green, a badass group of winged warrior women. They were nursing Shogo back to health, but Saturnyne decided to kidnap him. Of course, Jubilee was waiting for an excuse to charge the Starlight Citadel. Since everything went to hell before Excalibur #15: X of Swords Chapter Twenty even started, she found a good excuse to join the battle.

And it’s a good thing she did. At this time, the Krakoans are down to five (Bei and Doug haven’t returned yet), surrounded by the Amenthi Horde. Storm and Apocalypse call out, in Krakoan, “Hold Fast” and “Never Surrender. Jubilee’s arrival is like when the Witchking is about to kill Gandalf, and the Riders of Rohan show up. And if Excalibur  #15: X of Swords Chapter Twenty-One ended there, with the X-Men regrouping, it would have been epic already. But there’s one more part that makes this chapter absolutely perfect.

(Some of) Saturnyne’s Schemes Finally Come Back to Bite Her 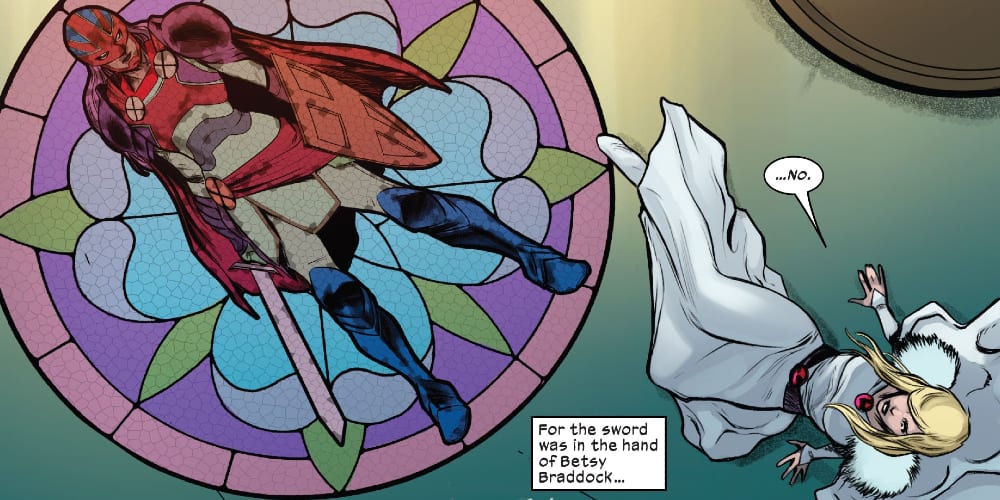 We still don’t know what Saturnyne’s entire plan is, but we’ve known for a while that she wanted Brian Braddock to return to the role of Captain Britain—and she orchestrated Betsy’s death to make it happen. When Betsy was shattered—literally—Saturnyne’s priestesses took the shards to the citadel. Saturnyne joked that she would make a mosaic out of them. Well, she wasn’t joking.

But the mosaic she’s building at the end of Excalibur #15: X of Swords Chapter Twenty-One isn’t about mocking Betsy’s memory. Instead, she’s performing a type of love spell to reveal her “heart’s true protector.” She’s expecting to get Brian’s image—instead, she gets Betsy’s. And man, does that sting her. Not just because this reveals that, despite Saturnyne’s misgivings, Betsy is the true Captain Britain. What this spell reveals is that all the Captain Britains of every universe are all some variation of Betsy Braddock. 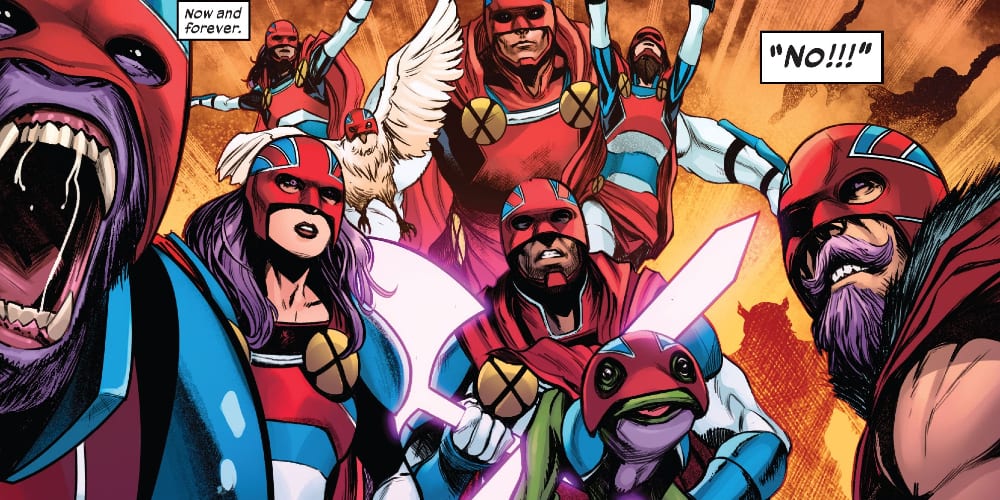 Does this mean Betsy’s coming back? That’s not clear—right now, she’s a mosaic on the floor of the Starlight Citadel, forged in Shogo’s dragon fire. But it is nice to see Saturnyne get what’s coming for her. And now, they just have a massive invasion to stop.