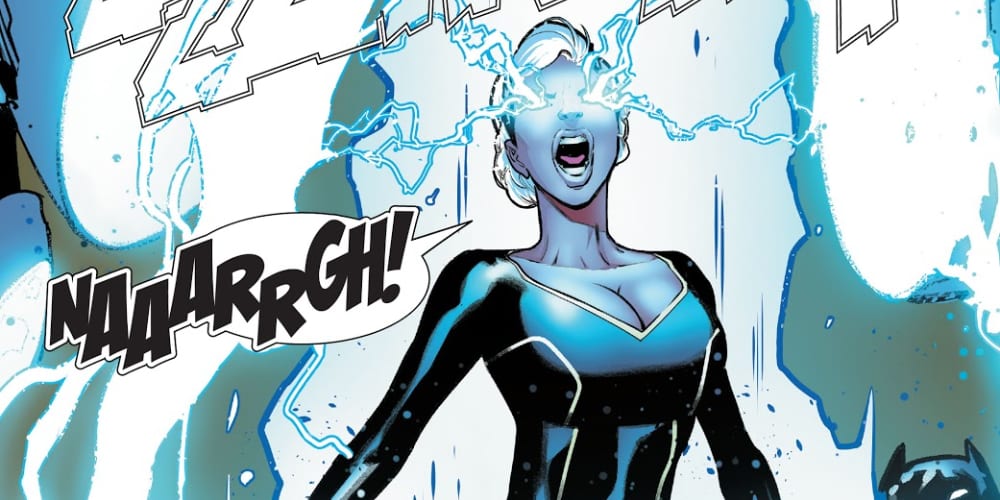 In Wolverine #6 and X-Force #13, we saw how Wolverine acquired the Muramasa Blade. Now it’s Storm’s turn to get her weapon, a Vibranium sword called Skybreaker. Since Storm can actually break the sky, this is very fitting. There’s just a small hitch. Like the Muramasa Blade, Skybreaker is in possession of a powerful force. That force? The Kingdom of Wakanda. Now, though Wakanda hasn’t yet signed the Krakoa treaty yet (they don’t need Krakoa’s medical advances), they’re still friendly with the X-Men. Moreover, King T’Challa and Ororo Monroe, once husband and wife, then bitterly divorced, are friends again. They admire each other. The royal family still considers her family. So, obviously, Marauders #13: X of Swords Chapter Five breaks all of that. 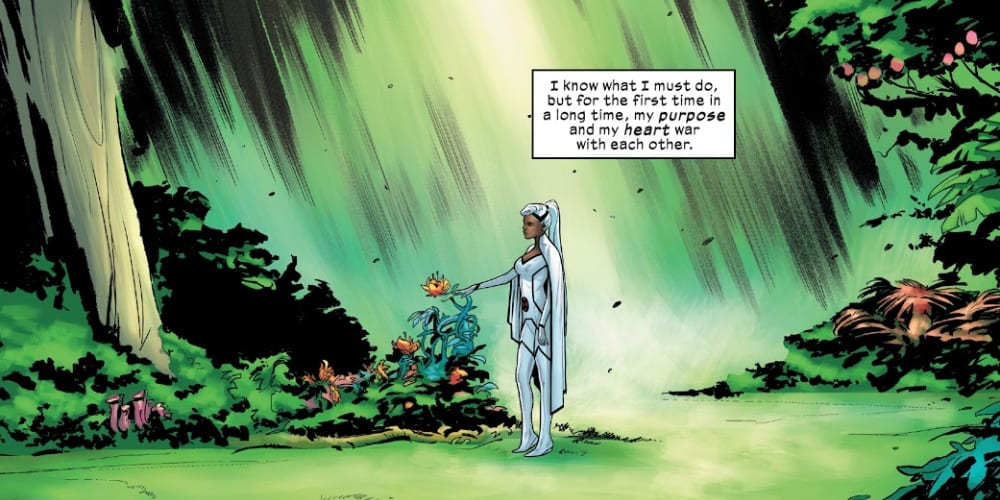 Every time I read something new from Vita Ayala, I’m certain that they’re going to be one of Marvel or DC’s future powerhouse writers. And thankfully, they’re rising up. After this massive epic wraps up, she’s not only writing the new series Children of the Atom, but she’s also taking the reins from one of Jonathan Hickman’s babies: the New Mutants. However, after Marauders #13: X of Swords Chapter Five, I just want them to get a chance of an ongoing (or even maxi) Storm series.

Ayala’s Storm is everything we love about the character. She can be regal but can turn on a dime (or a costume) into a street brawler. She’s elegant but then ruthlessly takes down guards. She’s a goddess—and also a back-alley thief. Storm projects intense confidence and determination, but she’s still vulnerable and unsure of herself. Every movement Storm makes that goes against her Wakandan family breaks her heart, and Ayala’s writing really makes us feel that, sometimes painfully. The characterization is amazing. So, when you see Vita’s name in solicitations, go ahead and add that title to your pull list.

Storm Might Have Started Another War in Marauders #13: X of Swords Chapter Five 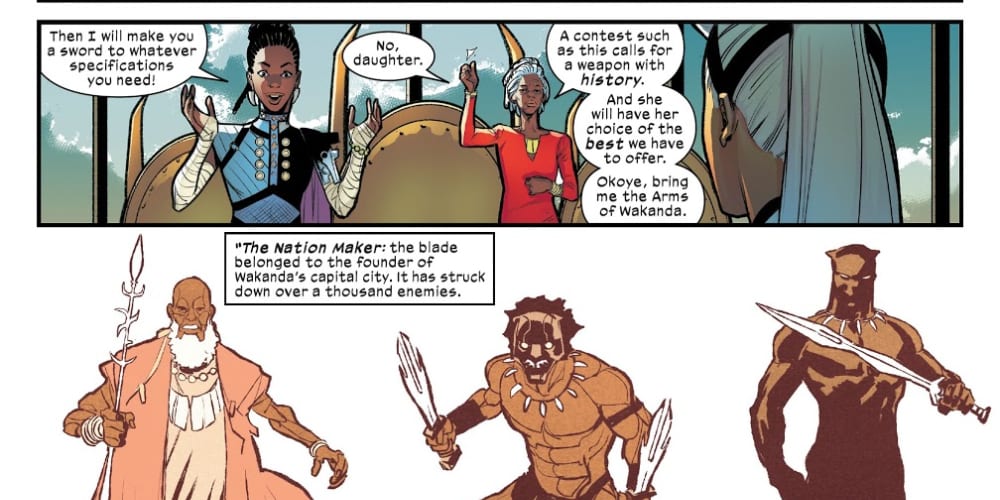 The Skybreaker sword isn’t simply an important Wakandan weapon—it was the first Wakandan weapon. Using Skybreaker, early Wakandan kings forged their nation, quite literally. The sword can summon lightning from a clear sky and direct it wherever the sword-bearer points. In the hands of Storm? That’s even more deadly. But she has to get her hands on it first.

Despite loving Storm, and respecting her to a degree, the royal Wakandan family clearly doesn’t trust Krakoa, even if Storm is their spokesperson. Storm tries to explain the severity of the threat Krakoa faces and how it won’t stop there. She needs Skybreaker to participate in the Tournament of Swords, so that she can help save the world, not just her nation. And she needs the sword now. Shuri and the royal queen. However, tell her to wait for Black Panther to return from an Avengers mission.

While they want her to wait, Storm’s on the clock. So dons her black costume, sneaks into a Wakandan temple, and steals it. Too bad Shuri and T’challa were waiting for her, and it doesn’t end well.

The Future of Wakanda/Krakoa Relations Is Completely Jeopardized 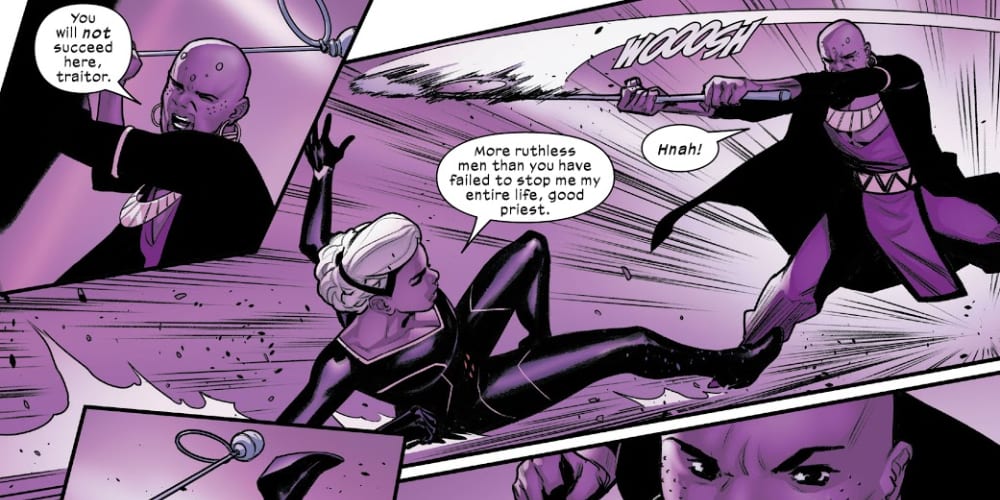 Yet again, Storm is a BAMF. (Image: Marauders #13, Marvel Comics)

Storm makes it clear that she’s not going to leave Wakanda without Skybreaker. And the Black Panther knows what she can do if provoked. There’s no way the situation ends well for T’challa. He can take Skybreaker by force, risking the lives of his people as he does, or he can let her go and look weak. There’s not much of a choice. He lets Storm go, but he clarifies to his soldiers that he isn’t going to forgive this act anytime soon. Whatever good graces the X-Men and Wakanda finally built between each other are gone.

This isn’t good for Krakoa and Wakanda. They are the two most powerful nations on Earth are now at odds with each other. And let’s not forget, Wolverine, on the quest for the Muramasa Blade, had to take it from the Hand, the ninja cult, and Hell itself. So, as of Marauders #13: X of Swords Chapter Five, Krakoa has already made three new enemies. When their war with Amenth and Arakko ends, they’re going to have a lot of repercussions to deal with.