Home » COMICS » Hellions #6: X of Swords Chapter Eighteen Does Not Go Well for the Mutant Misfits

Hellions #6: X of Swords Chapter Eighteen Does Not Go Well for the Mutant Misfits 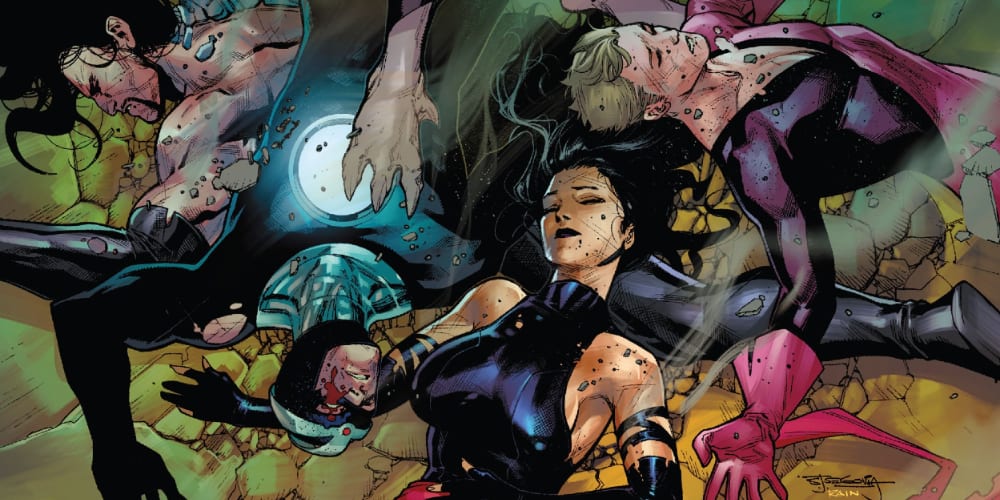 Early in X of Swords, Mister Sinister and his Hellions went on a mission to find the swords of Arakko before they could. If they succeeded, Arakko would have had to forfeit. But since we’ve seen twenty-something battles over the last several chapters, it’s clear that they failed. Well, Hellions #6: X of Swords Chapter Eighteen shows just how badly the team failed. And it’s not just that they didn’t find the swords. Really, everything pretty much goes tits up for the team.

Just How Badly Did the Team Fail in Hellions #6: X of Swords Chapter Eighteen 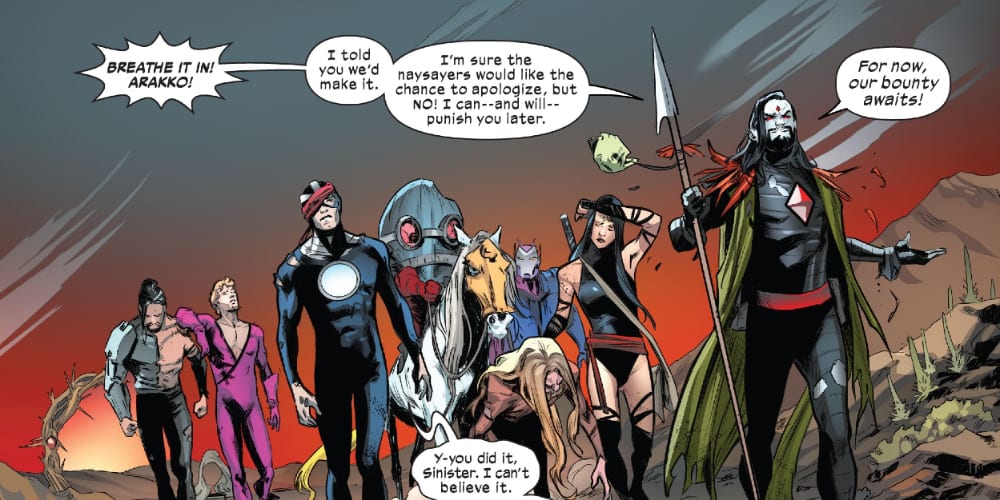 You know the movie “The Right Stuff”? This is the opposite of that. (Image: Hellions #6, Marvel Comics.

It goes very badly. Havok’s missing an eye, Nanny’s egg armor has a giant dent. And all of them look like they’ve been through all nine circles of Dante’s Inferno—and yet, the worst is still to come. However, just as Havok points out, Sinister technically achieved part of their mission. He got the Hellions to Arakko. They’re the first, and so far only, Krakoans to see the accursed lands. But what they don’t know is that their quest doesn’t even matter. Their journey through Otherworld took so long that there are only three challenges left.

Only Zeb Wells could pull off this issue. We’ve basically forgotten about the Hellions during all the madness, and that seems to be by design. When we do see them again, it’s very much an “ohhhhh, right. Damn.” That’s the nature of this team. Sure, the Quiet Council found a use for them and a way to channel their destructive tendencies. X-Force is Krakoa’s CIA, X-Factor is their FBI. The Hellions are SWAT. But as long as they don’t cause too many problems, the Quiet Council pretends they don’t exist. 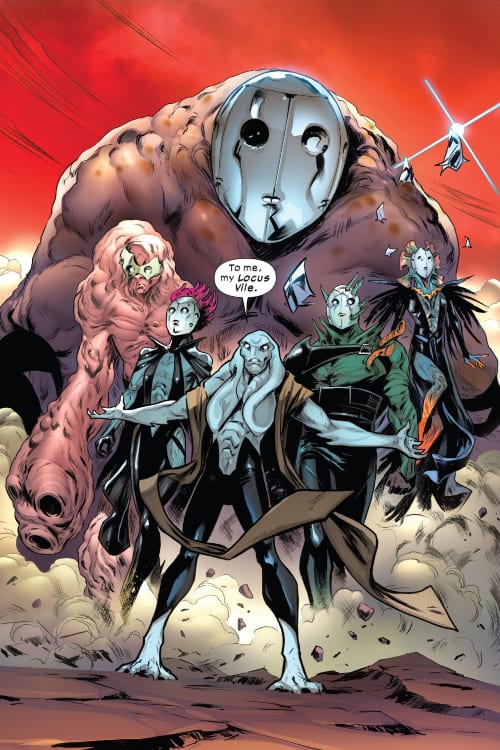 You know the movie “The Right Stuff”? This is the WTF of that. (Image: Hellions #6, Marvel Comics.

The Hellions are the worst mutankind has to offer. Yet compared to the group of mutants they meet in Arakko, they look like eight copies of John Lewis. We now present Tarn and his Locus Vile. And “vile” is an understatement, thanks to Carmen Carnero’s art in Hellions #6: X of Swords Chapter Eighteen. Instead of describing how horrendous each member is, we’ll let Zeb Well’s data page do it for us: 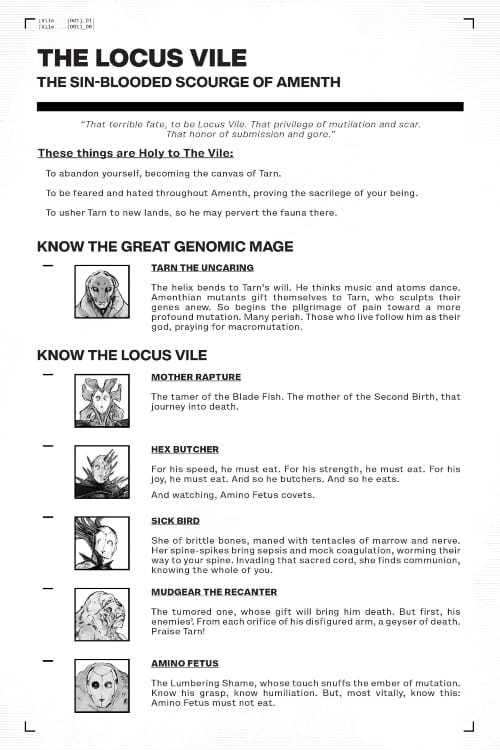 Oh wait, this might be from my family album. Hard to tell the difference. (Image: Hellions #6, Marvel Comics.

The Hellions get their asses handed to them. The Locus Vile rip through them in a matter of seconds, leaving the few survivors scrambling towards the Dryador Gate, where they entered from a moment ago. Nanny, Orphan Maker, and Sinister himself all die horrible deaths. And poor Wild Child—he sacrifices himself so that Psylocke, Havok (now minus an eye and two hands), and a wounded Greycrow escape. Oh, and don’t worry about Empath—he took off the moment the fight started. At least, don’t worry yet. 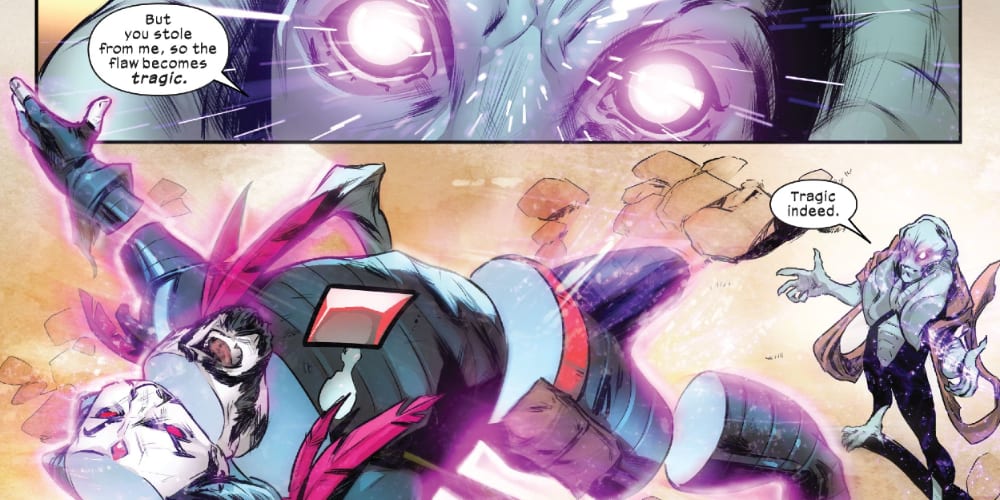 Hard to feel bad for Sinister on this one. (Image: Hellions #6, Marvel Comics.)

When Sinister meets the Locus Vile, he immediately falls in love—with their genetic codes. And though Tarn warns not to attempt harvesting their genetic material, that’s exactly what he dies. Using fly-like devices to gather the Locus Vile’s blood. He manages to get the samples to Psylocke before she escapes. Afterward, Tarn—well, you see the image above.

However, that’s not the end of Sinister’s deceit in Hellions #6: X of Swords Chapter Eighteen. After somehow getting back to Avalon pretty quickly, the remaining Hellions make it through the Krakoan gate, Well, nearly all of them—Greycrow shoots Empath when he meets up with them. After all, Empath did enslave him for the journey. When Greycrow, Havok, and Psylocke make it through, they’re ambushed. Surrounded by a dark smokey fog, Sinister emerges and kills them. And when Empath makes it through the gate, crawling, he lets him die. Of course, he does this: 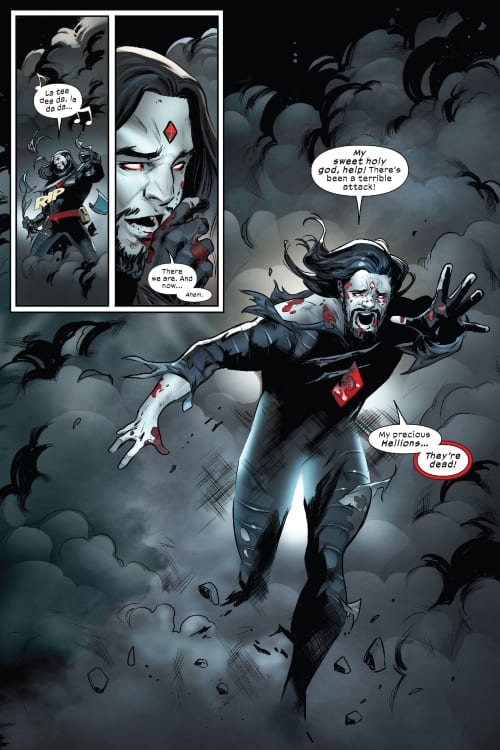 This is why we shouldn’t feel bad for whatever’s coming Sinister’s way. (Image: Hellions #6, Marvel Comics.)

However, there’s just one question: Did Empath see enough, and was he back in Krakoa long enough, for Cerebro to back up his memories and consciousness? Guess we’ll have to find out.

Click on Chapter numbers for our recaps/reviews. Likewise, click the Series/Issue numbers for more info on the comic from League of Comic Geeks.