Marauders #14: X of Swords Chapter Thirteen is an Awkward and Brilliant Parley Dinner (Recap/Review with Spoilers) 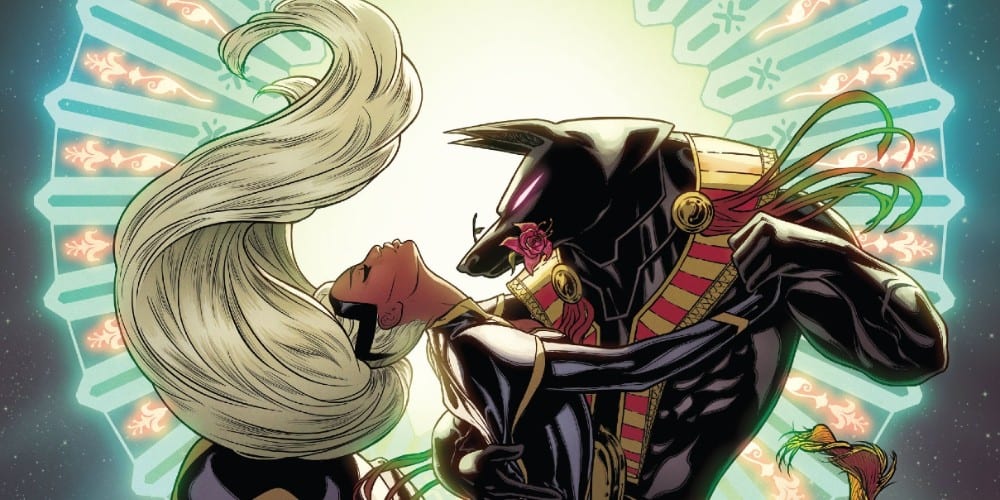 Now that all the Arakkii and Krakoan warriors are in the Starlight Citadel, it’s time to battle…over dinner. Lady Saturnyne really does love chaos. She forces 19 people that she’s about to make fight to the death eat dinner today and…mingle. The funny thing? They do! It’s a really unexpected chapter to the madness of X of Swords. Even more so, Marauders #14: X of Swords Chapter Thirteen has a levity we haven’t seen since Hellions #5. It also gave us some character development for the Arakkii warriors in a humorous way instead of the very dark bits we got in X of Swords: Stasis. 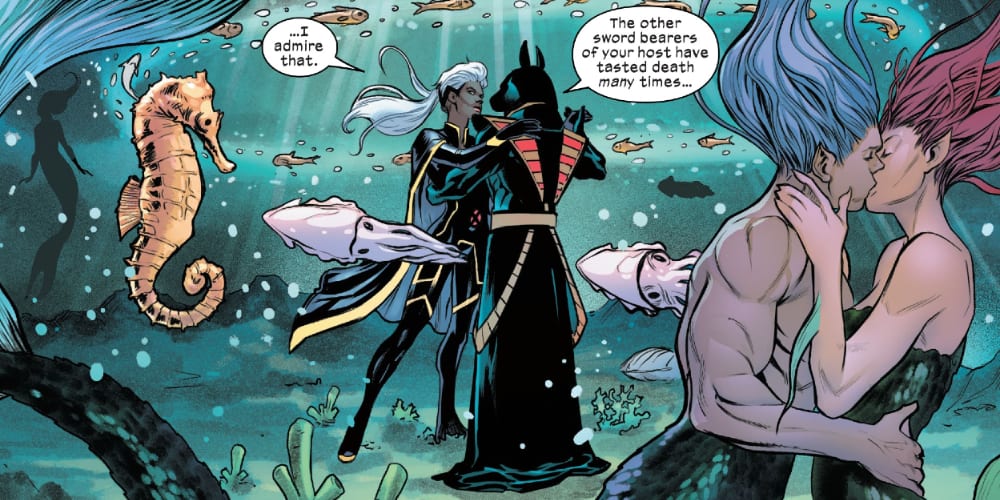 That horsefish is staring at those mermaids making out way too intensely. (Image: Marauders #14, Marvel Comics)

Most covers suggest the theme of an issue. So, when the cover for Marauders #14: X of Swords Chapter Thirteen came out, displaying Storm dancing with the first Horseman of Death, everyone assumed it was a metaphor. After all, “dancing with death” is a classic cliché. But no, Death and Storm share this beautiful dance. She doesn’t fear Death at all, and in return, Death finds her captivating. He’s clearly falling in love with Ororo (seriously though, who wouldn’t?).

But what this dance accomplishes is much more than just making Storm look cool—it makes us like Death. He’s not just Apocalypse’s child now—and he’s not just the child who betrayed his father. This glimpse at Death makes us want to see him survive this tournament, but it also means that an X-Man has to die if he does. That development? Well, it’s going to be an ongoing theme during this parley. 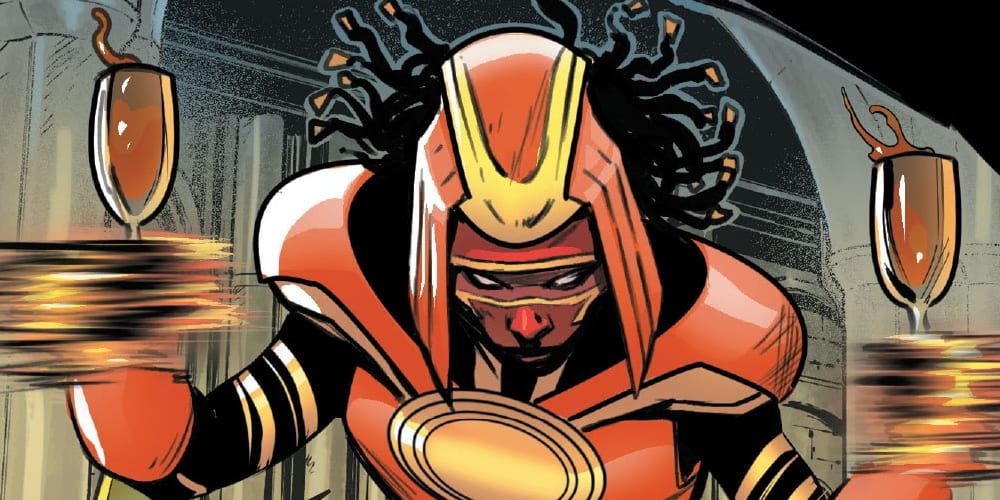 As the mutants wait for dinner to start, Gorgon and Magik go around assessing the Arakkii warriors for weaknesses. They notice that Death favors his left and that War is right-handed. And even that Redroot has “other eyes” hidden in her shrubbery. But when it comes to Isca, they’ve got nothing. So in Marauders #14: X of Swords Chapter Thirteen, they test her. What follows is quite an embarrassing scene for Gorgon and Magik. They drop their glasses to see how Isca responds—with her left or right hand. She uses both. And when she tests Magik, she doesn’t expect her to open a portal to catch the glasses and return them to her and Gorgon. Isca’s response? “This will be fun.” Gorgon’s analysis? “Kill as many as you can as fast as you can. I fear that woman’s sword will break us.”

Marauders #14: X of Swords Chapter Thirteen Has a Lot of Clues…Probably 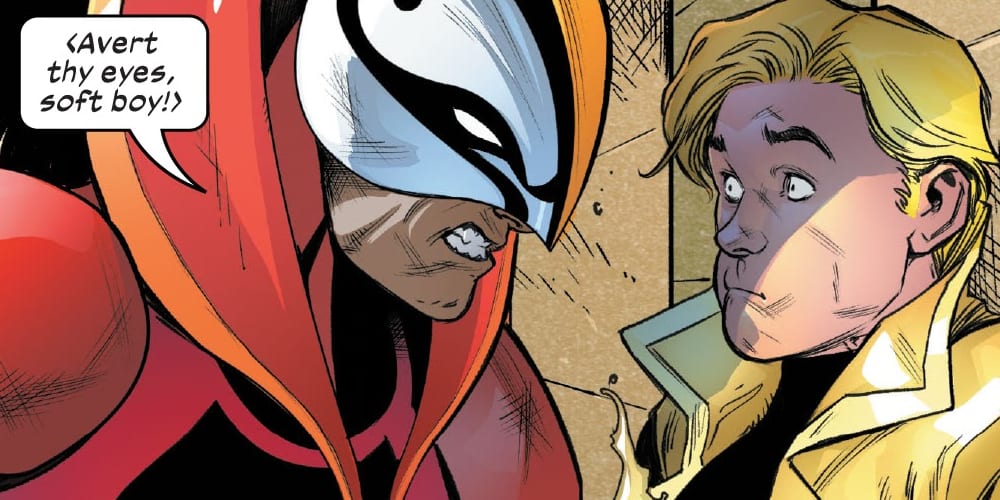 Well, Howard and Hickman did hint at this in the Stasis. (Image: Marauders #14, Marvel Comics)

You know those movies where you go back and see all the breadcrumbs leading to the big reveal only after you watch it? And you go “damn—that red door was there the entire time!” That’s what Marauders #14: X of Swords Chapter Thirteen is going to be. The banter involved all seems natural, but there are certain word choices or comments that feel like they mean more.

For instance, Gorgon’s “that woman’s sword will break us” is poetic, but he specifically mentions her sword and breaking. So, maybe that’s her weakness? Does she need her sword? Or when Wolverine accuses Captain Avalon, Brian Braddock, of not giving into Saturnyne. Braddock reminds Wolverine that he’s married—and Wolverine responds by saying that Cypher, Magik, and Cable, the youngest warriors, haven’t been. Just seems…direct. And there are definitely more, but we won’t know that until the even finishes, and we go back and reread it. 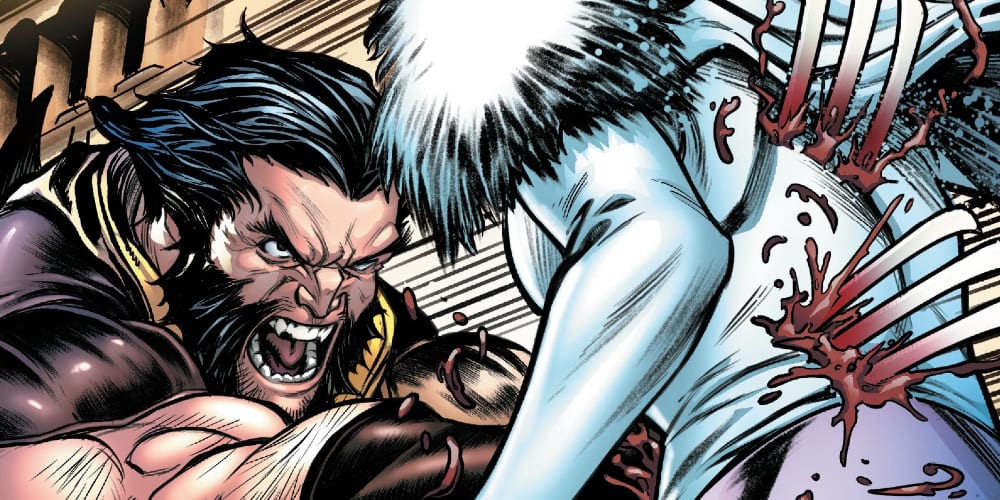 So, most everyone is having a good time at the parley dinner—except for Wolverine. He’s brooding over the situation and drinking way too much. However, he tells Storm he has a plan, and she tells him not to miss. So, obviously, Wolverine is going to kill someone or try to. Maybe Isca or Summoner? Perhaps Solem—he’d definitely want to kill him before having to make good on the favor he owes. But nope—none to them. Instead, Marauders #14: X of Swords Chapter Thirteen ends with Wolverine running all six claws right through Saturnyne.

It’s unexpected, but kind of makes sense. Saturnyne has some other game going on, and, more than likely, it involves both the Krakoan and Arakkii warriors losing. She doesn’t want the Arakkii overrunning her kingdom, but she also hates the Krakoans (read all of Tini Howard’s Excalibur to see why). But is taking out the manipulator the best choice? We’ll have to find out in the next chapter.

If you are enjoying our recap reviews, then click on Chapter numbers for more. Likewise, click the Series/Issue numbers for more info on the comic from League of Comic Geeks.