Cable #6: X of Swords Chapter Nineteen is the Darkest Chapter So Far

Cable #6: X of Swords Chapter Nineteen Is the Darkest Chapter So Far—and Another Mutant Dies (Spoilers) 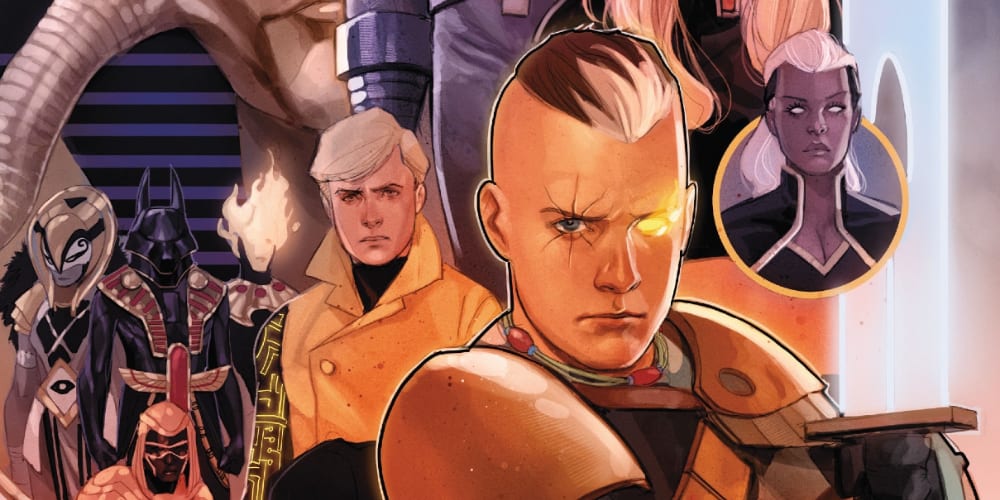 After the whirlwind of challenges in Chapter Eighteen (X-Force #14), Cable #6: X of Swords Chapter Nineteen slows the action down a lot. In doing so, Gerry Duggan and Phil Noto deliver the most painful chapter of the series so far. Things are already grim for the X-Men. They’re down 17 to 6 against Arakko. And we don’t even know how many battles are left. For all they know, it’s mathematically impossible to catch up. And with Saturnyne purposely tipping the scales against them, does it even matter if they can catch up? For the most part, these games, with some exceptions, were nonsense. But the two we get here? Far from it. 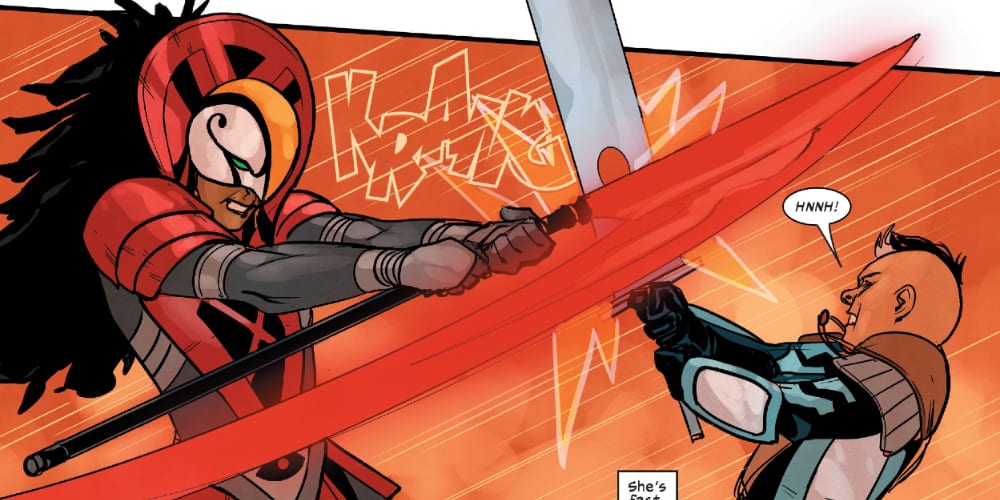 This is a Cable issue, after all. And when we return to the battlefield after a brief exchange from the Quiet Council, he’s about to fight Bei the Blood Moon. We’ve seen her a few times, but her most notable moment so far was her and Doug Ramsey’s wedding. And she actually seems in love with Doug. But now, Bei and Cable must battle to the death, and Cable is winning. He’s young, but he’s skilled. He’s had an entire lifetime of training. And we know Cable—he has no problem killing.

But the Nathan Summers in Cable #6: X of Swords Chapter Eighteen isn’t the older man we’ve known for all these years. It’s a teenage version of that man. A kid who hasn’t had to look someone in the eye and kill them. And when it comes time to, when Bei is pinned down and he’s going for the kill, he can’t do it. He hesitates, and Bei turns the tables on him. But before she can kill Cable, Doug intervenes and pleads to her not to kill his teammate. And Saturnyne agrees. She notes that the death of the spirit is a sort of death and lets Cable live.

Huh? Maybe she hates Cable a little less than the rest of the X-Men? Must explore…

With Cable #6: X of Swords Chapter Nineteen, the Event Turns Back to Seriousness 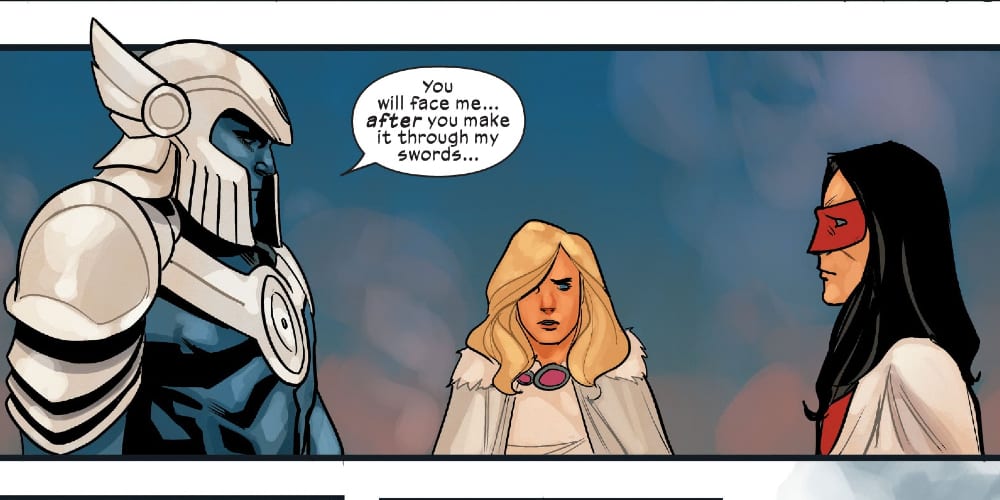 The second battle—another fight to the death—is yet another amazing duel and one of the most emotional in these nineteen chapters. However, the other two epic battles featured characters we hold dear: Wolverine and Storm. But this time, we have Gorgon fighting The White Sword of the Citadel. Gorgon isn’t a major player in the X-Men universe, and we only recently met the White Sword. By the end of this battle, you’ll wish Marvel published a Gorgon ongoing series.

Gorgon doesn’t exactly fight the White Sword. Instead, he fights the White Sword’s 100 soldiers. At this point, the X-Men are down 18 to 6, and the White Sword laughs as his men brutalize Gorgon, going so far as gouging out his eyes. Sadly, Gorgon’s mutant power relies on his eyes. Like the mythical creature, he can turn people into stone with just a look. Well, he could. However, Gorgon is also one of the greatest swordsmen in the Marvel Universe, and he manages to kill thirteen warriors before Saturnyne intervenes—again. Thirteen is an important number. Why? Because this happens: 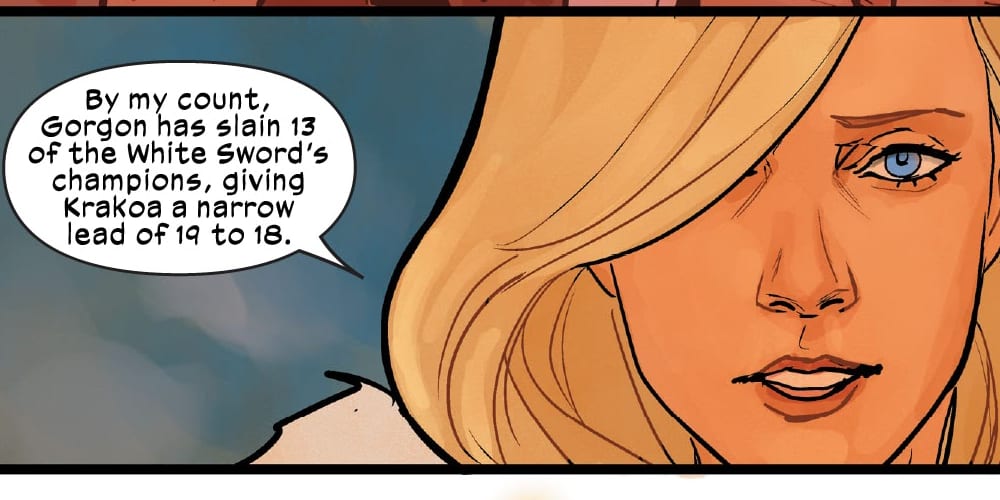 What. The. Balls. For the last several issues, Saturnyne has gone out of her way to make sure the X-Men lose as often as possible. She deliberately changes the rules on Wolverine so that he never wins a challenge (again, he did try to kill her, so that’s on Logan). So now, the score is Krakoa: 19, Arakko: 18. But not for long.

The White Sword kills Gorgon. Permanently. This moment in Cable #6: X of Swords Chapter Nineteen is a stark reminder of what the nine Krakoan champions were willing to sacrifice. And that line from Apocalypse, “That is how a mutant dies, children,” is a punch in the heart.

Where Cable #6: X of Swords Chapter Nineteen Leaves Us 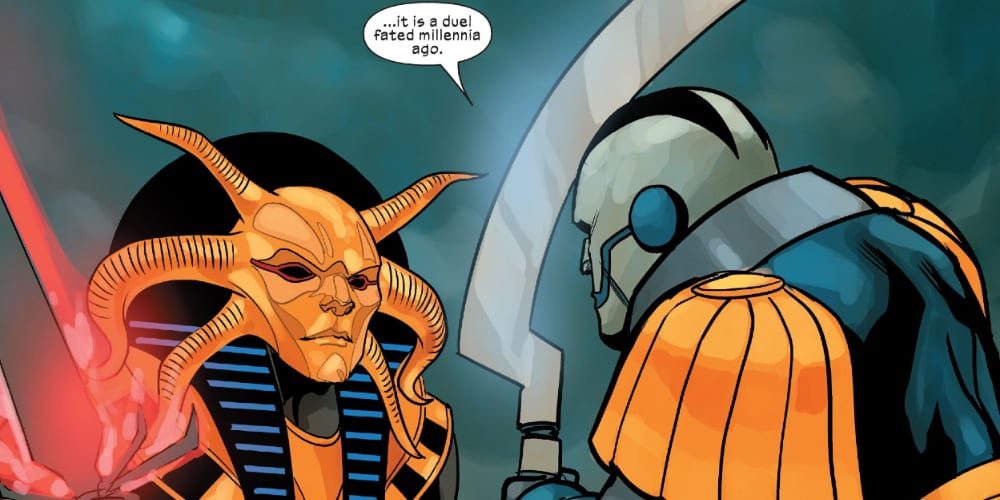 How does she turn her head? (Image: Cable #6, Marvel Comics)

As Doctor Strange famously said, “we’re in the endgame now.” But after Cable #6: X of Swords Chapter Nineteen, we are literally at the end of the game. The score is tied—if that means anything, only Saturnyne knows. And after sitting 24 challenges out, Apocalypse and his wife, Annihilation, are about to face off in a final battle. But there’s one other important development. After Bei beat the crap out of Cable, breaking his arm and soul, he reaches out to Jean and Cyclops, his parents. They haven’t been able to communicate with the Krakoan warriors. And, since this is before Gorgon and the White Sword face-off, all they know is that their people are losing badly.

To quote another Avenger character, Nick Fury, “You have made me very desperate. You might not like that you did.” That’s where Cyclops is right now. His son is hurt, and he’s had to sit out this entire battle despite being the Captain Commander. Even worse, he had to watch his son—his young son—go off to possibly die. Messiah CompleX, Second Coming, Fear Itself, Utopia, Avengers Vs X-Men…all of these events show what happens when Cyclops is pushed into a corner—and it usually doesn’t end well for his adversaries. Whatever he has planned is going to be epic. It always is.

As always, click on Chapter numbers for our recaps/reviews. Similarly, click the Series/Issue numbers for more info on the comic from League of Comic Geeks.

Godzilla Vs Kong Might Skip Theatrical Release, Hit Streaming Service Instead
Chadwick Boseman Double Will Not Appear in Black Panther 2

COMICS
Who Is Brian Bolland? From Judge Dredd To The Killing Joke
COMICS
Who is Bill Finger? The Co-Creator And Mastermind Behind Batman
Marvel
Who Is Wiccan? One Of The Most Powerful Magicians In The Marvel Universe
COMICS
Conan The Barbarian Comics Already Have A Release Date (2023)
COMICS
Who is Neal Adams? A Comic Book Legend
Featured
The Advantages of Using a VPN