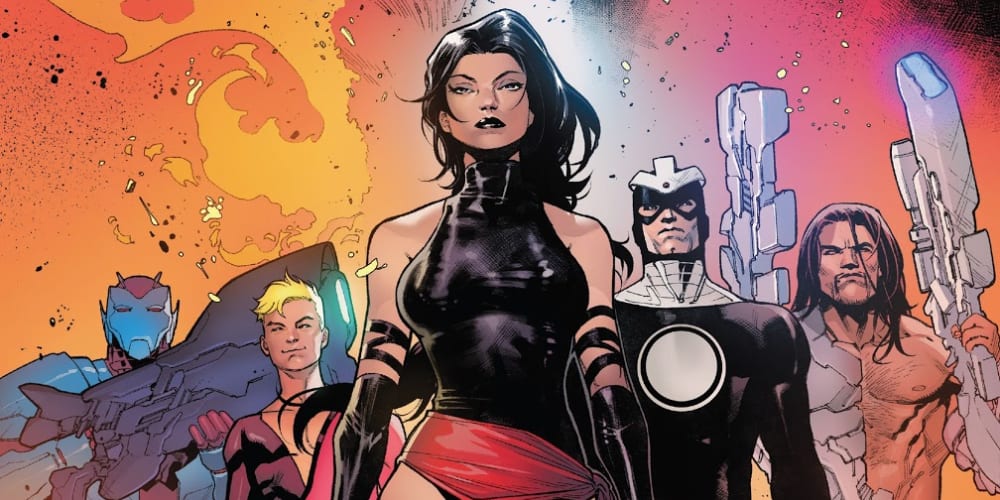 In the newest X-Men event, ten champions of Krakoa must face ten champions of Arakko in what will hopefully be an epic battle. But first, they have to find the swords. While we watch the X-Men find their blades one at a time, we’ve only seen one Arakko champion find their blade. And we only saw that because Wolverine and Solem’s quests intertwined in Chapters Three and Four. The rest of the Arakko champions, we can only assume, are trying to find their swords in their respective lands. Without the swords, they need to forfeit. So, in Hellions #5: X of Swords Chapter Six, Mister Sinister comes up with a fantastically terrible plan: cheat.

Hellions #5: X of Swords Chapter Six Shows How Desperate The X-Men Really Are 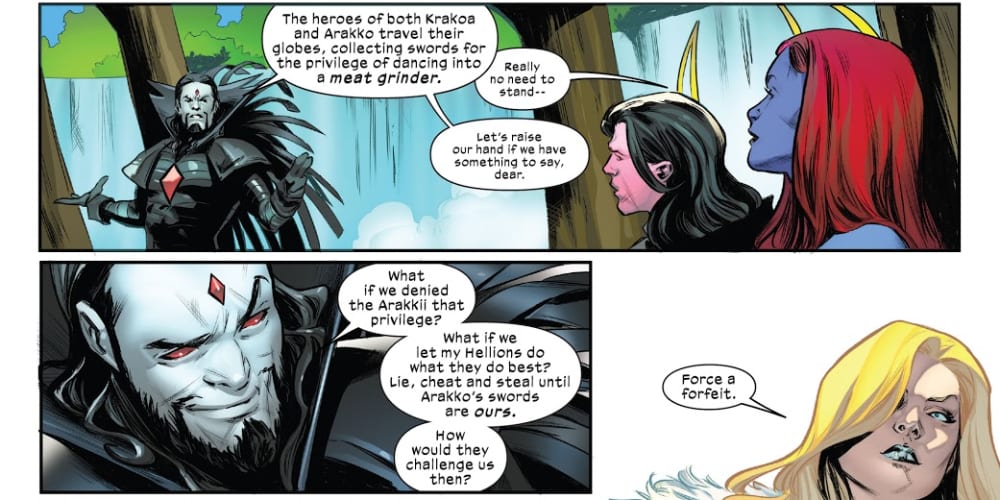 Even his worst ideas he presents with style. (Image: Hellions #5, Marvel Comics)

The Hellions are the X-Men’s version of the Suicide Squad—and the mission the Quiet Council sends them on is very much a suicide mission. Remember, if an X-Man dies in Otherworld, the Resurrection Protocols won’t work on them. Rockslide was the first to die this way, but it’s doubtful that he’ll be the last, and Mister Sinister is a big reason why. He proposes to the Quiet Council that the Hellions enter Otherworld, sneak into Arakko, and prevent their champions from finding their swords, forcing a forfeit. This very much goes against the rule of the tournament. The entire point of Saturnyne’s tournament was to limit the bloodshed.

But already, one of the Krakoa’s sword bearers, Apocalypse, is barely hanging on to life in the healing gardens. They still need to find several swords, and some of their best (and worst) fighters have to take their place at the circle. Already, Magik, Wolverine, and Storm await the other seven champions. Most of the council hate Sinister’s plan, but they also don’t want to risk more mutant lives. But there’s just one thing Sinister didn’t plan for in Hellions #5: X of Swords Chapter Six. The Council also decides that Sinister should accompany his team this time. 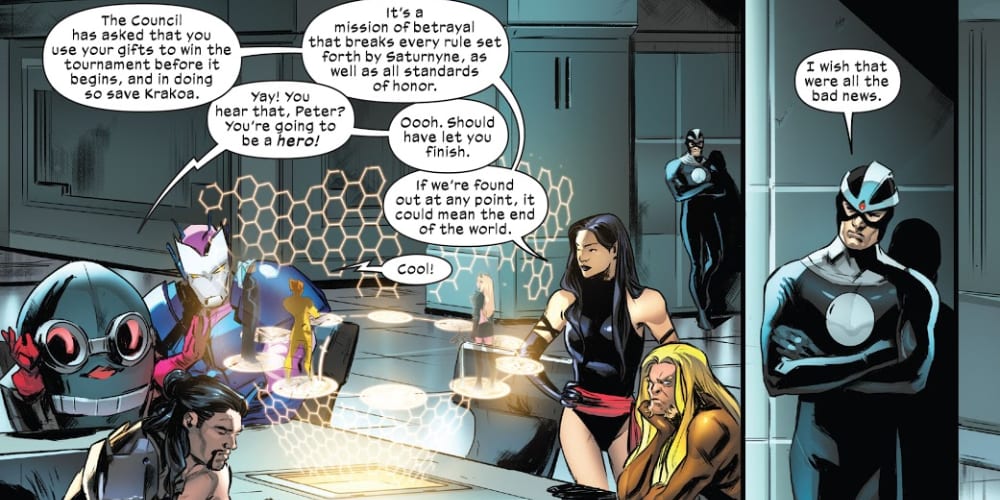 So, the group of nearly uncontrollable superpowered mutants with varying degrees of sociopathy get the risks more than the Quiet Council does? Seems about right. (Image: Hellions #5, Marvel Comics)

The Hellions have to enter Otherworld through Avalon, currently under the rule of the mad king Jamie Braddock, Captain Britain’s reality-warping brother. They’re supposed to enter Otherworld undetected, but as soon as they enter, they start making a bit too much noise. From the panel they walk through the Avalon Gate, it’s clear that this mission will end very badly for the Hellions.

Midway through Hellions #5: X of Swords Chapter Six, the Hellions cause a racket in Avalon, alerting soldiers working for Saturnyne. As it turns out, a horse that Jamie “gifted” to them he had stolen from Saturnyne’s stables. While Empath was able to control the situation and turn the soldiers back with his emotion-manipulating powers, his power does wear off over time, and it’s more than likely that they’re going to alert the Magistrate of Otherworld about their arrival. 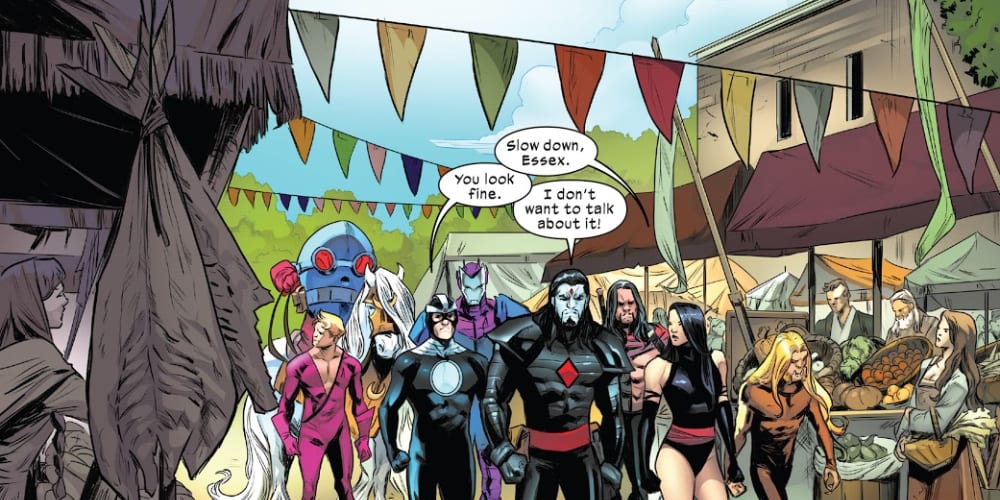 No good deed goes unpunished. And so, we must part with the one thing Sinister loves about everything else. The one thing that has defined him as a character since his debut in the 1980s. His fabulous cape.  Alas, this is the cost Jamie Braddock requires entrance into Otherworld. The popped collar, the long blue strands of plumage—each like a cape unto themselves. There is no finer cape in any corner of superhero comics, and now…now the man who makes the cape no longer dons the beauty. And though he gets a new one, it’s just not the same.

There Is One Problem With Hellions #5: X of Swords Chapter Six 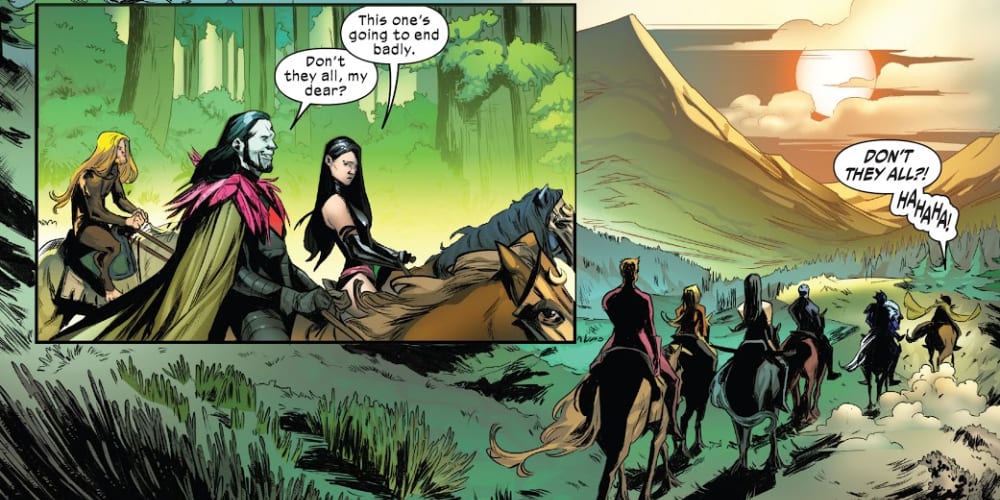 This is the first chapter of X of Swords that felt like it had a bit of filler. While the plotline feels important, it just doesn’t seem like a lot happened. The humor was a needed touch to the so-far very serious event. However, Hellions #5: X of Swords Chapter Six ends abruptly. I even checked to make sure there wasn’t a Comixology update on the title. At the same time, I wish we got the conclusion to their quest a bit earlier in the event. There are several chapters before we get to Hellions #6: X of Swords Chapter Eighteen. EIGHTEEN! Considering how close that is to the end, something horrible will probably happen to our team of misfit mutants.