X-Men #15: X of Swords Chapter Twenty is the Beginning of the End 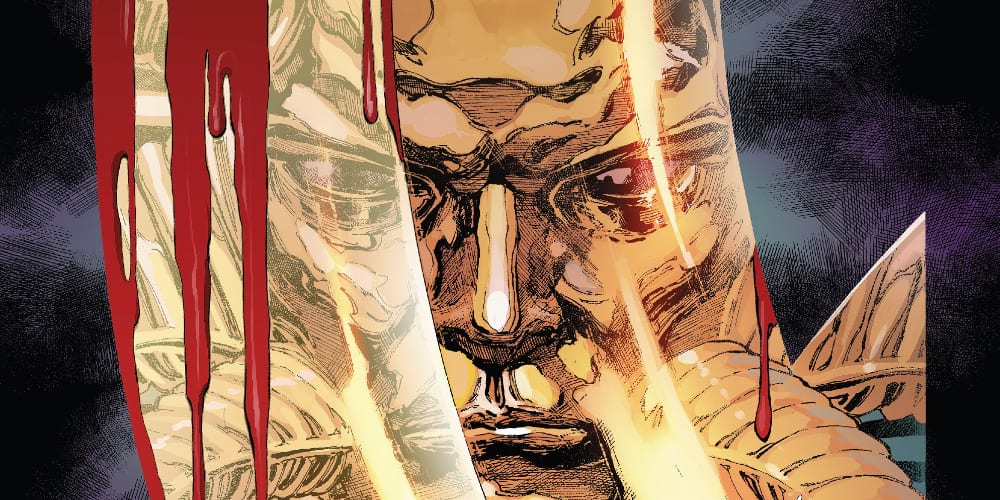 The game is set. The pieces are moving. But while that’s certainly true for Saturnyne’s game in Otherworld, it’s also true for Cyclops, the Captain Commander of Krakoa. In the last chapter, he psychically talked to his son, learning just how badly the X-Men were losing. When they talked, the X-Men were down 18 to 6. However, thanks to Gorgon’s swordsman skills and his sacrifice, the score is now even. But Cyclops doesn’t know that. So, as Apocalypse and his wife Annihilation begin their duel in X-Men #15: X of Swords Chapter Twenty, Cyclops is doing what he does best: planning.

The Intertwined Plots of X-Men #15: X of Swords Chapter Twenty 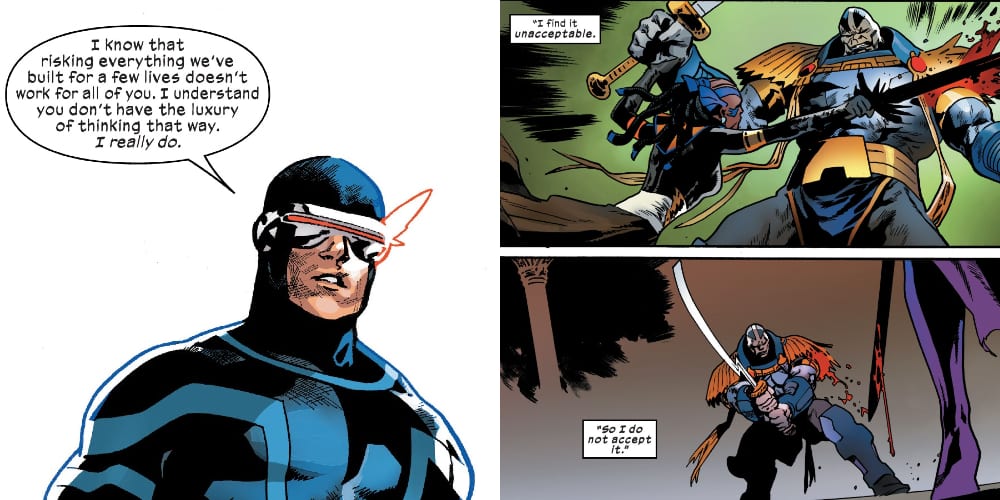 Juxtaposition at its finest. As the council decides that the nine champions’ lives aren’t worth saving, the champions are fighting to save them. (Image: X-Men #15, Marvel Comics)

Hickman balances two narratives very well. While Cyclops debates with the Quiet Council, Apocalypse and Annihilation engage in the ultimate lover’s quarry. The juxtaposition is even more felt considering that Cyclops and his wife (or whatever you call the Wolverine/Scott/Jean thrupple) present their argument as a united front. But what’s fracturing, slowly, is the Quiet Council. Sure, they had some minor disagreements in the past, but this crisis put them to the test, and the convictions of each council member finally found their impasses.

Apocalypse and Annihilation’s battle is sword against sword, each player fighting for their own people, and it isn’t much more complicated than that. But the arguments of the Quiet Council are much more complicated. It’s one of those “no one is wrong” conundrums. Hickman staggers X-Men #15: X of Swords Chapter Twenty so that it’s argue stab argue slash argue slice. It’s a slow build to an emotional final moment of the issue. 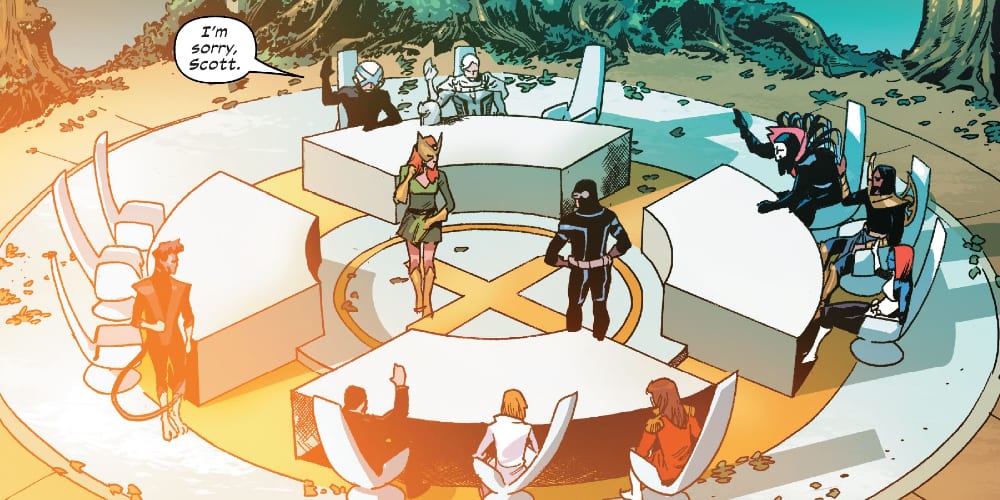 As said above, every council member has valid points. Exodus points out that they are asking mutants to sacrifice themselves, knowing that if they die in Otherworld, the Five can’t resurrect them. Of course, Nightcrawler, Kate Pryde, Emma, and Jean are all for going to battle—until Shaw argues that they shouldn’t be allowed to go to the battle. Furthermore, if they do go, they have to forfeit their spot on the council. The four of them are outvoted. Jean immediately talks Nightcrawler out of it, saying that he is the soul of the Council. Emma can’t go because she basically runs the economy of Krakoa. And Kitty can’t go because, as Cyclops lies to her, they are going through a gate, and she still can’t use them for whatever reason.

But Jean can’t sit on the sidelines while her son and her husband(s?) fight for Krakoa. She gives up her spot on the council to join Cyclops on whatever insane plan he has to save their people and prevent the hordes of Amenth from invading Earth. As of X-Men #15: X of Swords Chapter Twenty, the Council learned one important fact: it can be broken.

The Big Battle of X-Men #15: X of Swords Chapter Twenty 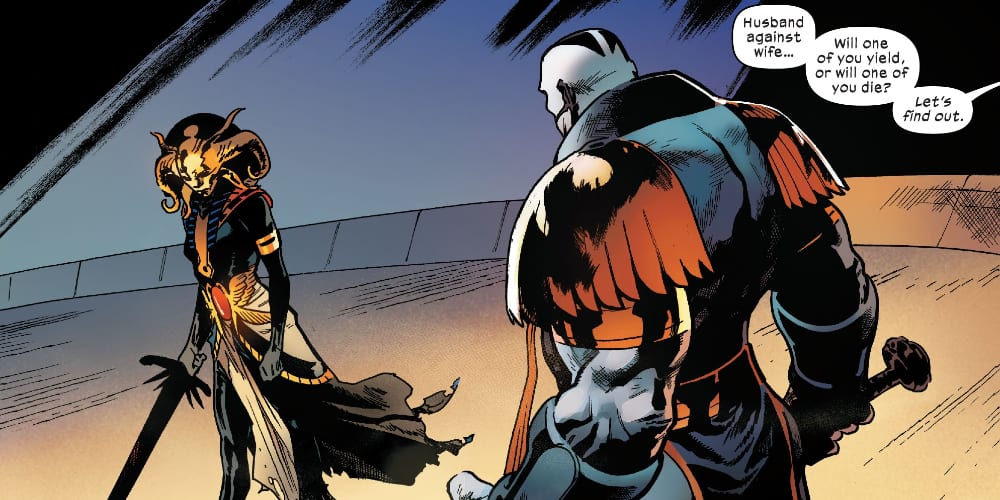 Such a cute couple. I can’t wait to see them try to kill each other. (Image: X-Men #15, Marvel Comics)

After Saturnyne fixed the tournament score to a tie, Apocalypse and Annihilation knew that her Whyness always had this last battle in mind. Four mutants, two on each side, are dead due to Saturnyne’s game. And as Annihilation, the ruler of Krakoa and Amenth has immense power. However, she doesn’t fight Apocalypse that way. She takes the Annihilation helm off and faces her husband as her true self: Genesis. Regardless, she’s still more than a match for Apocalypse—and breaks his sword. However, this isn’t how X-Men #15: X of Swords Chapter Twenty ends.

Genesis doesn’t defeat Apocalypse. With a broken sword, Apocalypse manages to land a mortal strike—yet he refuses to kill his wife, even as Saturnyne demands it. His hesitation might cost Otherworld and Krakoa everything. Genesis puts the helm back on, regaining control over the Amenth Horde. 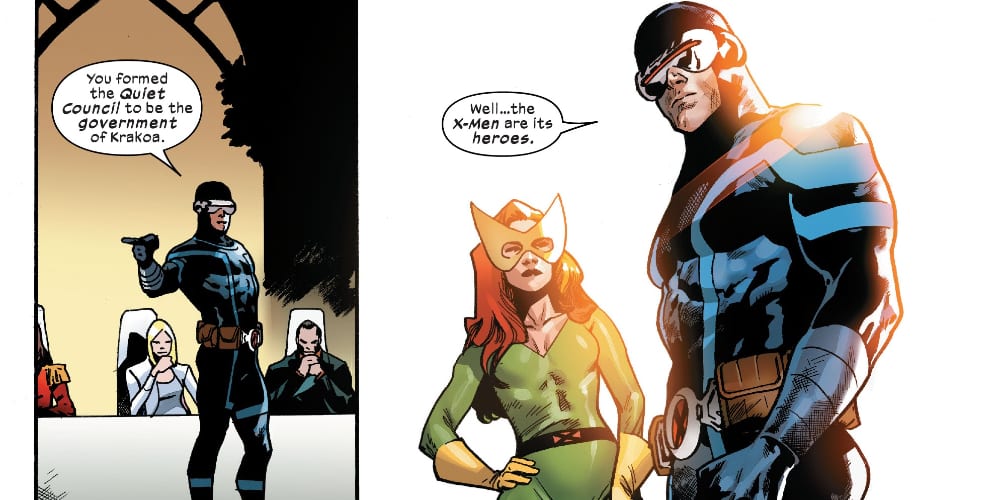 At one point during the argument between Cyclops and the Quiet Council, he points out that the Council might be the government of Krakoa, but the X-Men are its heroes. So why does it say in the data pages say this:

We probably won’t learn more about this until after X of Swords, but Chapter Twenty, X-Men #15, has many details that we won’t even know the full impact of until much later. That’s how Hickman works.

MarvelMovies
Who is Star-Lord? Let’s Get To Know The Guardians Of The Galaxy
COMICS
Who Is Will Eisner? And Why Is There An Award In his Honor?
COMICS
Who Is Brian Bolland? From Judge Dredd To The Killing Joke
COMICS
Who is Bill Finger? The Co-Creator And Mastermind Behind Batman
Marvel
Who Is Wiccan? One Of The Most Powerful Magicians In The Marvel Universe
COMICS
Conan The Barbarian Comics Already Have A Release Date (2023)