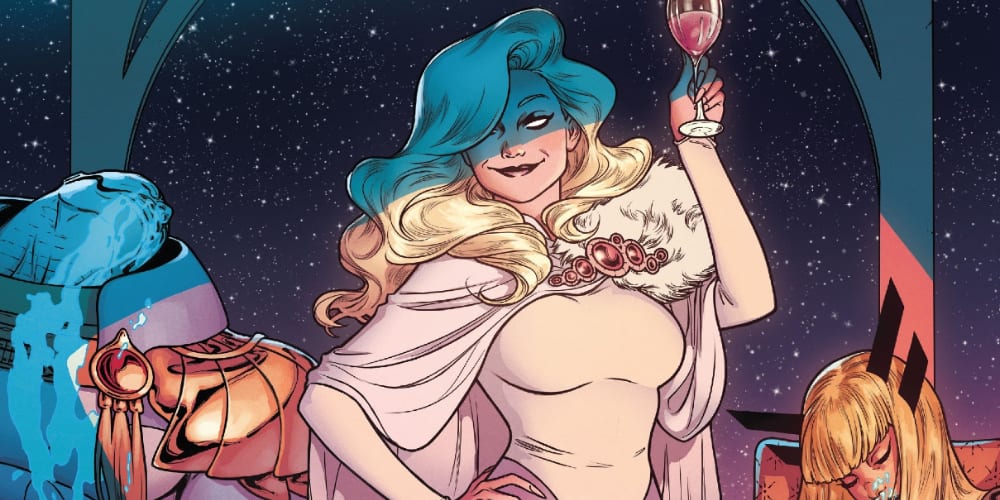 Considering that the X-Men writing team decided to spend two issues on the Parley Dinner, maybe we should pay attention to the many altercations and moments of banter. While this definitely feels like a filler issue, there’s a lot to unpack here. So, since Chapter Thirteen ended with Wolverine murdering Saturnyne, let’s start with where Marauders #15: X of Swords Chapter Fourteen picks up.

The Aftermath of Wolverine’s Actions Are Painfully Detailed in Marauders #15: X of Swords Chapter Fourteen 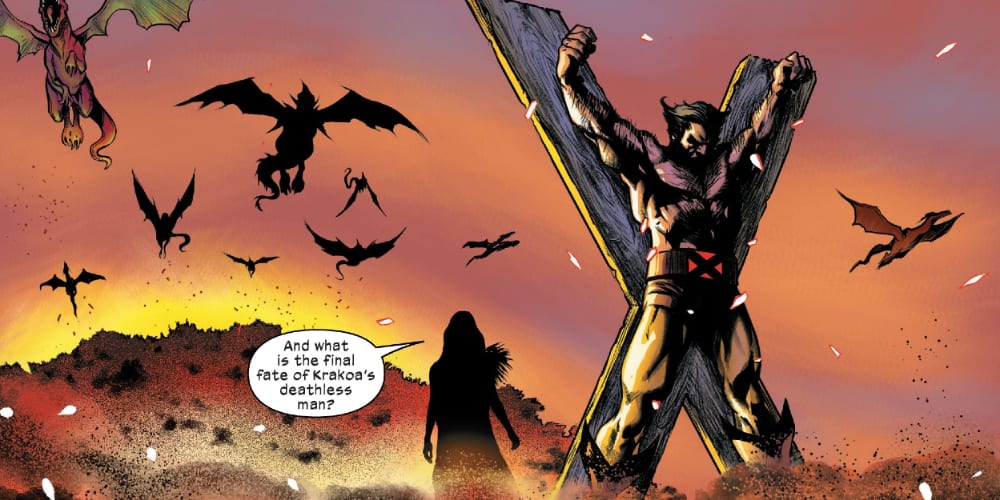 The issue starts with a data page, one of the trademarks of the Dawn of X era. On this page, we learn that the Arakkii destroyed Otherworld, invaded Krakoa, killed basically all of the X-men and Avengers, and are in the process of destroying the world. Finally, there’s Wolverine, on an X-cross, just like he was in the iconic Uncanny X-Men #251: 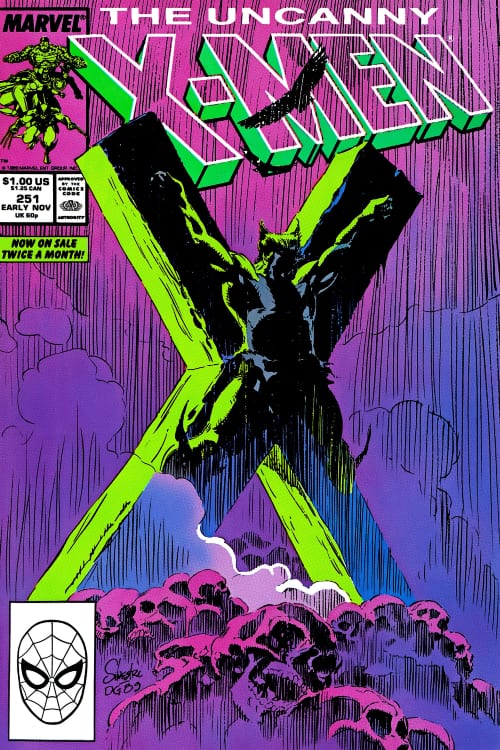 And much like that issue, what Wolverine is seeing isn’t exactly real. But it’s going to be if he actually killed Saturnyne. (You didn’t really expect that to happen, right?). Saturnyne knows that Wolverine plans to kill her, and right before he does, she gives him this vision into the future as a “gift.” If she dies, everything dies. The tournament is the only way to keep the Arakkii warriors at bay. But that doesn’t mean Saturnyne is on their side either. Again, she’s playing the Loki role, and we’ll see this come up a few times during Marauders #15: X of Swords Chapter Fourteen.

Some of the Arakkii Warriors Have Honor…Others, Not So Much 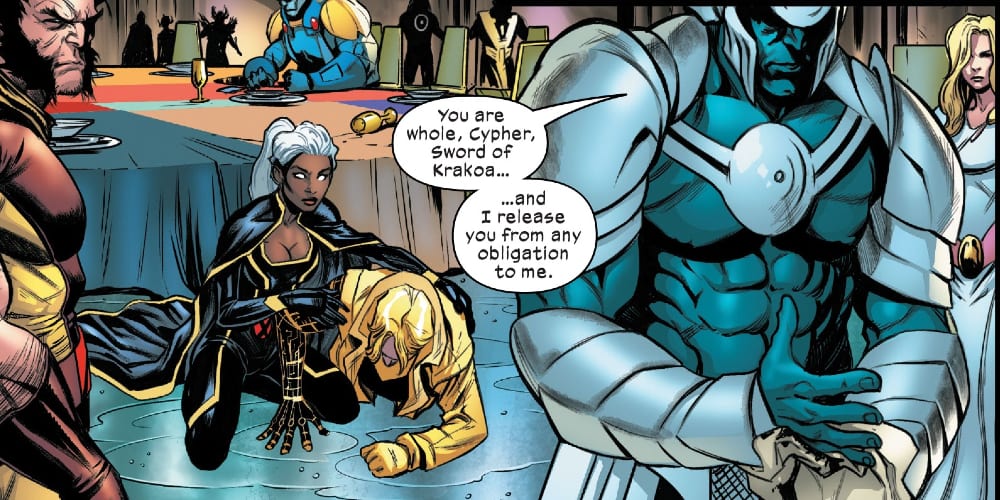 At the end of Chapter Thirteen, War slipped some poison into Wolverine’s food. Now, what I thought was going to happen was that Wolverine would smell the poison, attack War, and break the rules of Parley. Instead, Cypher decided that since Wolverine wasn’t touching the magical sushi, he’d steal a few off his plate. And then he starts foaming at the mouth. Now, Saturnyne could do something, but since Wolverine got a little stabby, she considers War’s crime even.

Thankfully, the White Sword comes to Cypher’s aid. He heals the New Mutant alumni, and even more, he asks for nothing in return. What sucks is that this moment, like others, make us really like the Arakkii contestant. And he’s not the only one. Again, we see more of Magik and Isca the Unbeaten in Marauders #15: X of Swords Chapter Fourteen. But this time, they are literally playing games to see how Isca wins each time. If not for the whole “we need to kill each other” thing, these two would be great friends.

Isca also takes a liking to Cable, who, though Apocalypse passive-aggressively scolds him for being immature. Then again…Apocalypse’s 1000-year-old children aren’t acting their age either. Which leads to a great moment between Apocalypse and his wife Annihilation: 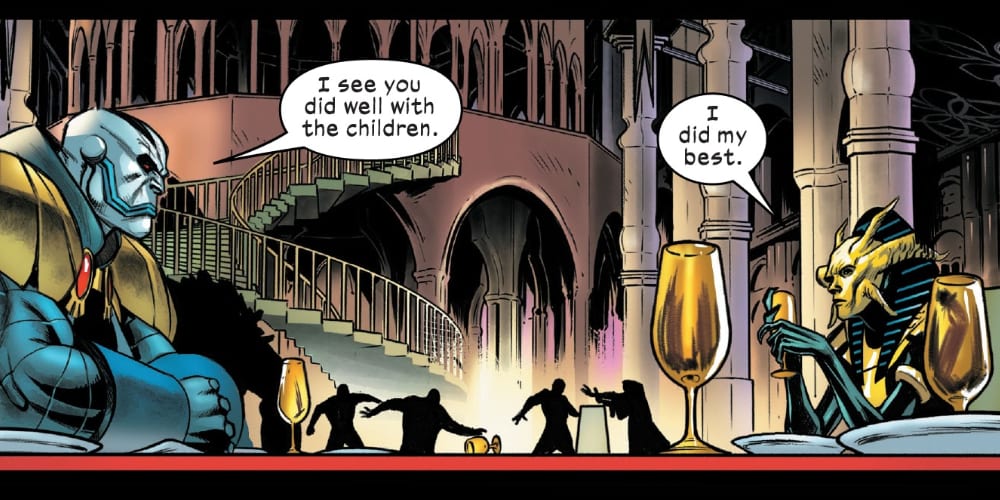 Regardless of honor or immaturity or cowardice…or whatever Pogg-ur-Pogg is doing, the Arakkii warriors keep getting more and more likable. Well, most of them. Summoner’s still kind of a dick.

Death is, as you’d expect, a very stoic character. Since we never see his face beyond his grim mask, he’s even more mysterious. The only thing we do know, thanks to Chapter Thirteen, is that he’s got some romantic feelings for Storm. But when one of the servers of the Starlight Citadel serves an Egyptian god-figure a scarab in Marauders #15: X of Swords Chapter Fourteen, a sacred symbol, this happens: 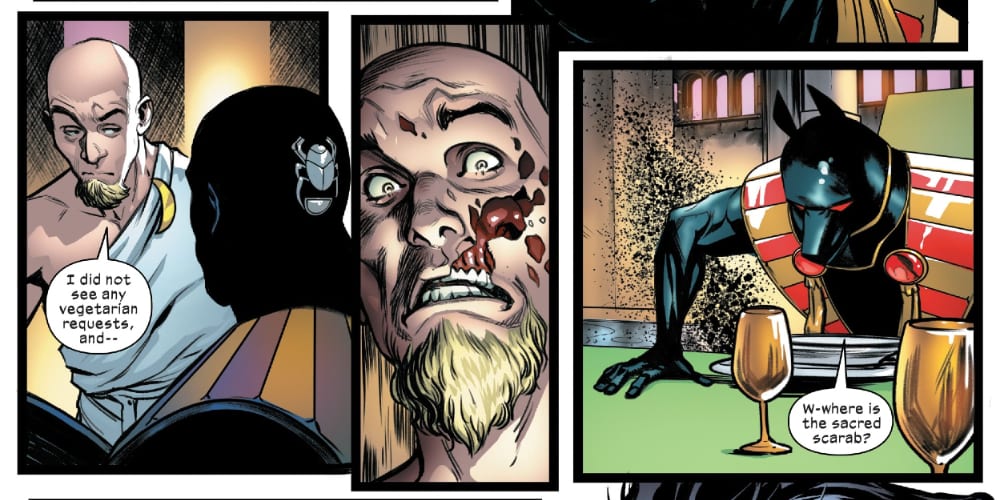 So, uh…whichever X-Man has to fight Death in a deathmatch might want to stay behind him.

Get Ready for Round One of the Tournament…and We Already Know Who Will Win! 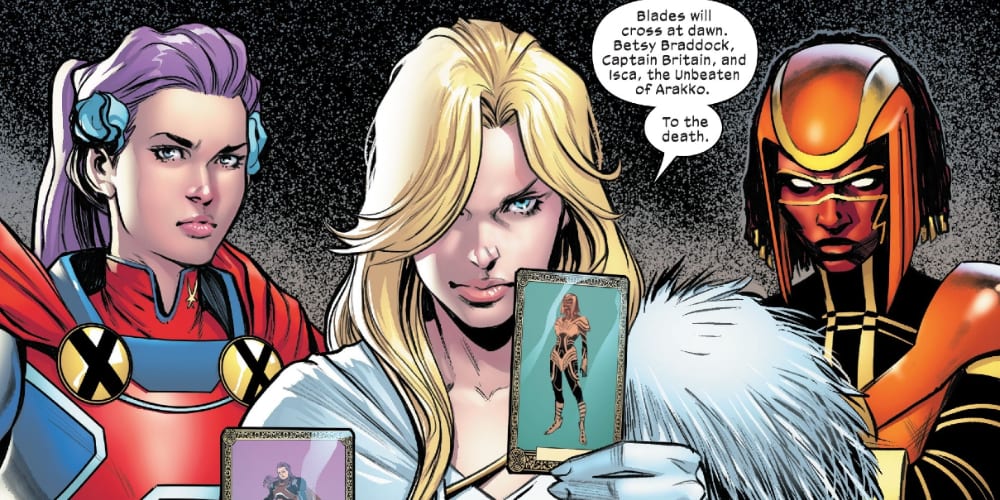 Yeah…Captain Britain has to fight Isca the Unbeaten. Basically, Marauders #15: X of Swords Chapter Fourteen ends by telling us something terrible will happen next issue—or something really crazy. After all, how do you beat the unbeatable?

While yes, this issue doesn’t progress the plot very much (or at all), it was a lot of fun. Probably the last time these characters will have the chance.