X-Men X of Swords: Creation kicks off the biggest X-Men Story in Years

Home » COMICS » X of Swords: Creation is an Epic Start to the Biggest (or, at least, Longest) X-Men Event Since the 1990s

X of Swords: Creation is an Epic Start to the Biggest (or, at least, Longest) X-Men Event Since the 1990s 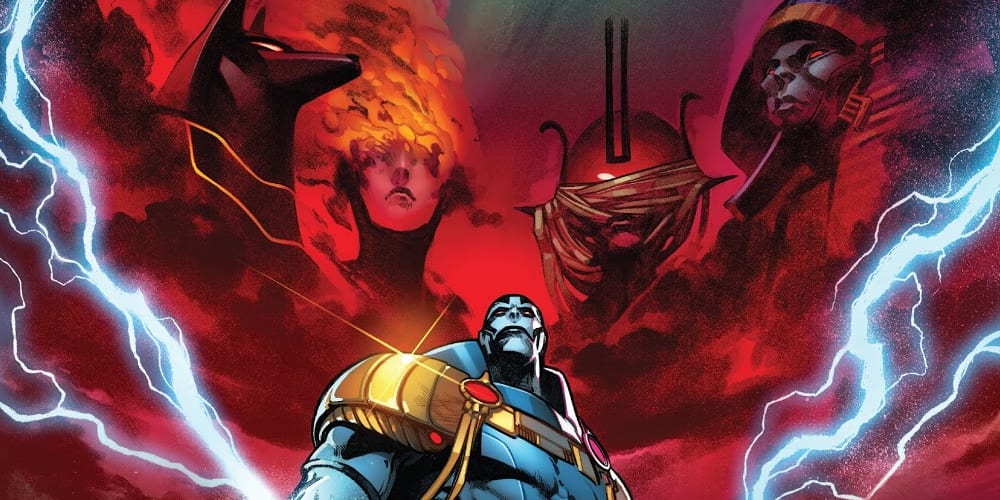 The Newest X-Men event, X of Swords, started this week with X of Swords: Creation, the first chapter of a 22-part series that ends in November. If you’re doing the math, then you’ll see that there will be weeks where we get as many as three chapters at once. But putting the insane length and schedule of the event aside, X of Swords: Creation already offers an intense story with drastic implications for the X-Men. 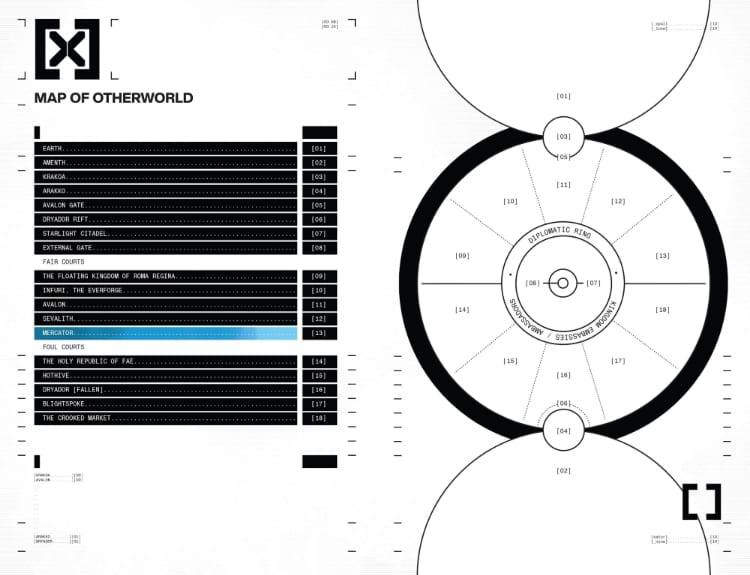 All the names above get a little confusing, even if you’ve been reading X-men comics before X of Swords: Creation. So, let’s take a quick look at these various lands of merry mutants.

This was the first home of mutants, but a few thousand years ago, an enemy holding a sword called the Twilight Blade split the island in two from beneath the Earth. They caused a rift in Okkara, from which demons and monsters poured out in droves. Apocalypse was able to seal off the hordes of madness out of Earth, but at a great cost. His Horseman—his children—and half of Okkara were sealed off from our world too. The two halves of Okkara became…

Krakoa, the Home of Earth’s Mutants (First Half)

In the Marvel Universe, Krakoa has a complicated history. This was the island where the original X-Men went missing, and Xavier sent a new team of X-Men to find them…who all vanished or died, so he sent out a new new team, introducing fan favorites like Nightcrawler, Storm, Colossus, and Wolverine. The sentient island turned out to be a mutant itself, registering on Cerebra. In recent years, the island served the X-Men on the grounds of the Jean Grey School. Now, it is the land for the mutant nation of Krakoa. Once again, it is home to a mutant civilization, and Apocalypse is back with his “old friend.”

Arakko, the Home of Mutants Past (Second Half)

Armenth, the Pit of Madness

We don’t know much about Armenth yet, but we’re definitely going to learn more over the next 21 chapters of X of Swords, as the X-Men face this chaotic mutant populace. We still have no idea who held the Twilight Blade that cut Okarro in two. Right now, all we need to know is that the monsters of Armenth are marching forward, and they’ve already taken.

Arak Coral, a Piece of Arakko Reunited with Krakoa

When Summoner found a way to get to Earth, he took a chunk of Arakko with him. However, since Amenth monsters already infested Arakko, he brought a lot of them to Krakoa. For the most part, these creatures stick to Arak Coral (which should tip the X-Men off that something is wrong). Oddly, one of these monsters had one of the ten swords the X-Men will wield, the Light of Galador, lodged in its foot. Cable now owns that sword.

Akkaba, the Cult of Apocalypse

While Clan Akkaba wasn’t mentioned in the pages of X of Swords: Creation, or any relatively recent X-Men stories, it wouldn’t be surprising if they appear. Apocalypse is ancient, so, as you can imagine, he’s got quite a lot of descendants. That’s who Clan Akkaba is—the descendants of En Sabah Nur. Now, in Rick Remender’s Uncanny Avengers, Thor, Sunfire, and the Apocalypse Twins destroyed Akkaba City and everyone within. But they all have En Sabah Nur’s blood, which can heal people…as long as they don’t mind becoming clones of Apocalypse without any free will.

How the X-Men Found their Way to X of Swords: Creation 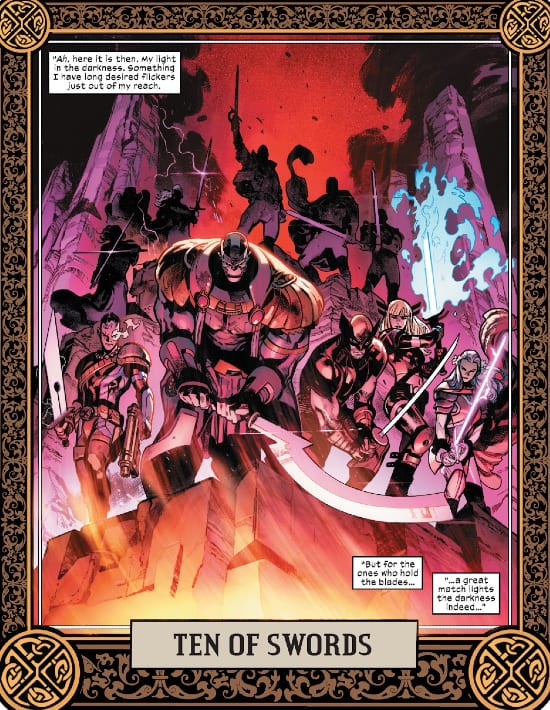 Okay…in the back, we definitely have Gorgon, Storm, and Magneto. One has to be Doug Ramsey…no idea who number five is. (Image: X of Swords: Creation, Marvel Comics)

Ever since the first issues of Excalibur and X-Men in the Dawn of X era, En Sabah Nur, Apocalypse, has been obsessed with Otherworld. Even without some revelations about his past, it’s easy to see why anyone would want control over the realm. Otherworld is the nexus of realities. At its center is the Starlight Citadel, a fortress with doors to the multiverse. It’s also where Avalon exists, and the source of all magic in the Marvel Universe. However, we’ve never seen Apocalypse as a sorcerer before. He was always more of a science-based character.

However, it makes sense that he would have a vested interest in magic, considering that he’s, literally in some cases, older than dirt. He might be older than we realize, as we learn in X of Swords, the once-rival of the X-Men was the leader of an ancient mutant civilization, but to save Arakko and Krakoa, he had to seal himself out…or so one legend goes. But he’s been hiding his motives, wanting to reunite Arakko and Krakoa, from the rest of the Quiet Council, and his Excalibur teammates.

Apocalypse Leads the X-Men Into X of Swords: Creation (Spoilers Ahead) 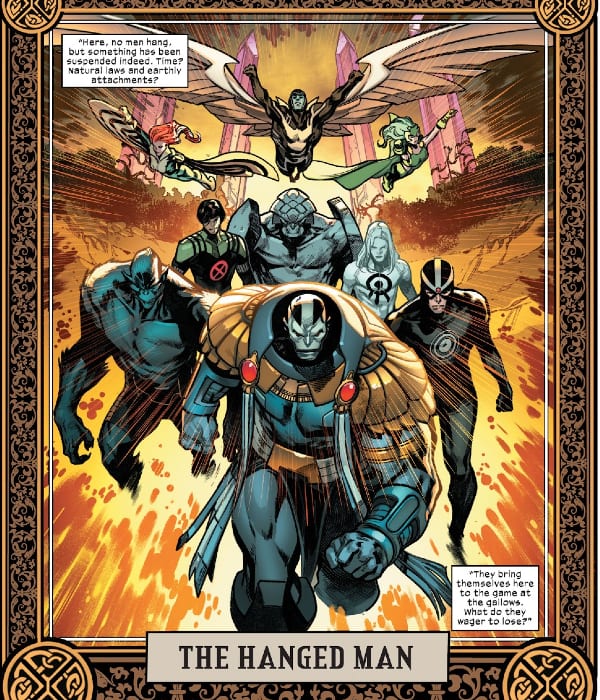 When Apocalypse’s grandson, Summoner, arrived from Arakko, Apocalypse doubled his efforts to reunite with Arakko again. He built the Eternal Gate, a powerful entryway to Otherworld that Krakoa wants to stay open. How did he make the gate? Murdering four Externals and turning their bodies into paths of magical stones. The path goes right to the Starlight Citadel, the nexus of realities. What could go wrong?

Everything. Summoner betrays his grandfather. Apocalypse sent Summoner into Otherworld, along with Banshee and Unus the Untouchable to protect him. What he didn’t know was that an army from Amenth is already marching across Otherworld towards the Starlight Citadel. And leading this army? The original four horsemen, Apocalypse’s children. Summoner returns with Banshee, who is near death. Unus was captured—which Summoner uses to lure Apocalypse into Otherworld.

This is the big turning point for the X-Men in X of Swords: Creation. Apocalypse leads a strike team into Otherworld. With Opal Luna Saturnyne watching above, the forces of Amenth overwhelm the X-men. The original four horsemen, and Summoner, stab Apocalypse. And things quickly go from bad to worse.

It would take an entire article to explain who Saturnyne is, but for now, just know she’s in charge of the Starlight Citadel, sometimes a villain, and once led the Captain Britain Corps…when there was one. She’s also more than a little bitter that a mutant from Krakoa, Betsy Braddock, is currently Captain Britain…despite claiming citizenship of another country.

The X-Men Are Already Facing Tragedy in X of Swords: Creation (MAJOR spoilers) 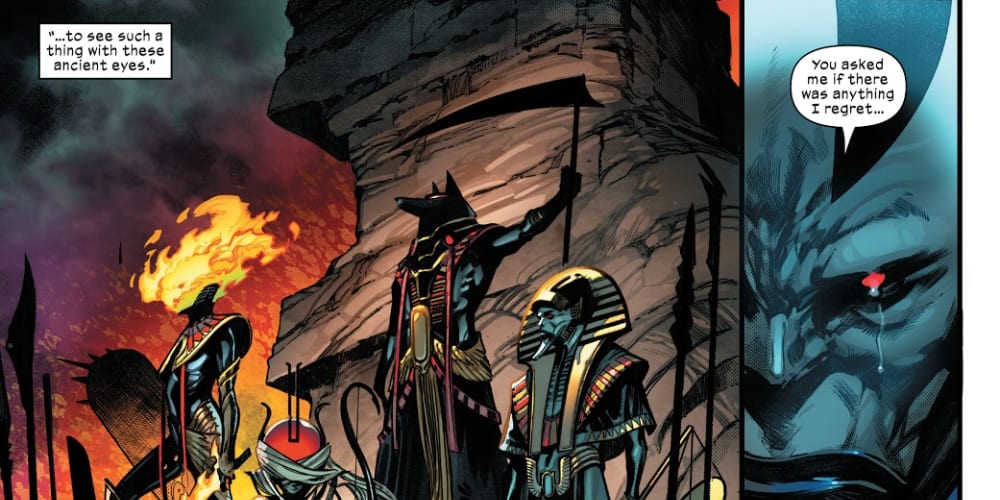 Right now, the X-Men don’t have to worry about the pesky inconvenience of dying. But it looks like the Resurrection Protocols might be in jeopardy soon. Still, the X-Men do experience pain, and there’s a lot of that happening in X of Swords: Creation. Both Apocalypse and Banshee are in bad shape. Krakoa and the Quiet Council are at odds with each other over the Eternal Gate.

And to save Otherworld (and Krakoa and all realities) from Amenth, Saturnyne forces the X-Men to choose ten sword bearers to defend the Starlight Citadel.

But there is a very tragic moment. An X-Man dies…and it isn’t clear if they can bring him back. Summoner cuts Rockslide in half. Generally, this wouldn’t be a problem since he can regrow himself, but Pepe Larraz’s art shows that Summoner’s sword cuts through Rockslide’s essence too. Does Rockslide have DNA? How do they resurrect rock and soul…and no, that’s not the name of Comic Years’ first LP (but Josh…band idea?). We might find out if the X-Men really can bring back anyone in next week’s X-Factor #4, chapter 2 of X of Swords.

Like All Great X-Men Event kickoffs, X of Swords: Creation is a Little Bit Confusing. 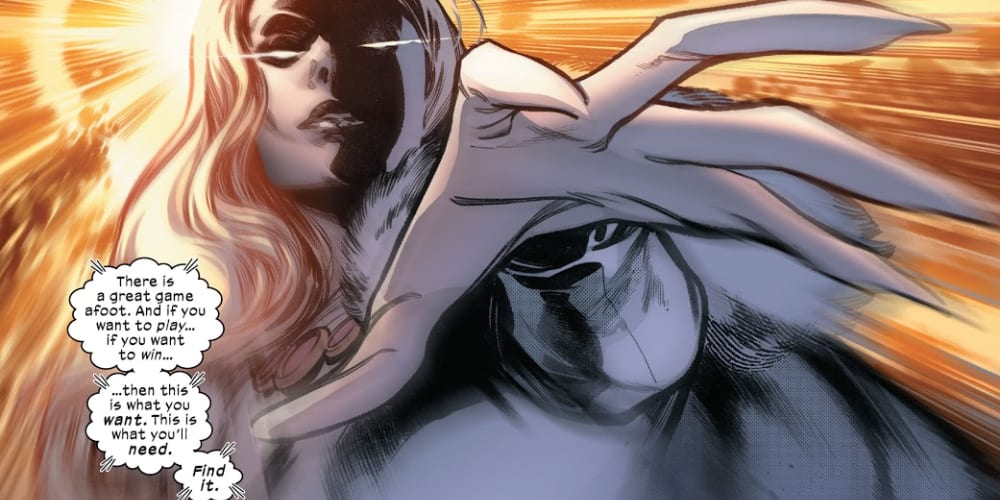 Or you can just tell us what it is, Saturnyne. Image: X of Swords: Creation, Marvel Comics)

X-Men events are indeed a celebration of what multiple creators can accomplish with one title. There aren’t many crossover events that even attempt to do what X-editors have done over the years. Generally, a crossover event has one writer working on the “main title” and then other writers working on tie-ins. The X-Men have rarely gone that route. Instead, they are actual crossovers. Every title tells part of the story and connects them all together. There’s no “main series,” aside from a couple of one-shots to bookend the event. For this X-Men epic, we’re getting X of Swords: Creation, kicking off the event, X of Swords: Stasis, as the interlude, and X of Swords: Destruction for the ending. The other 19 chapters are told in the pages of X-Factor, Wolverine, Cable, X-Force, Hellions, Marauders, New Mutants, Excalibur, and X-Men.

A lot happens in X of Swords: Creation, and my apologies to the X-Men writers and artists; I’m sure I’m off on just a few minor details. However, Creation is worth rereading, even at 70 pages, not only to get some clarity but because it’s damn good. Who would have expected that we’d see Apocalypse cry? Or the X-Men rally to save Unus the Untouchable, one of the least popular mutants in the X-Men canon, and one the X-Men don’t even take seriously. It would be like the Avengers willing to go to war for D-Man. The X-Men walk into a trap in X of Swords: Creation all to save Unus the Untouchable.

What’s Next for the X-Men after X of Swords: Creation? 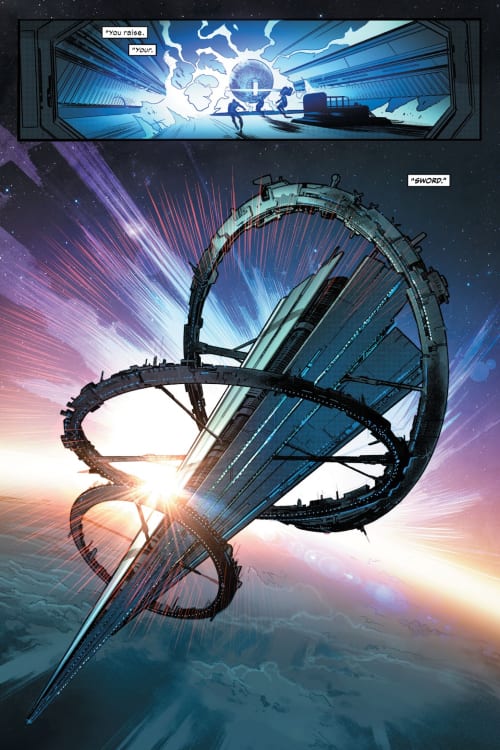 I kind of wish they waited until next week to reveal the new SWORD title because it diminished one of the biggest twists in X of Swords: Creation; the X-Men gain access to the Peak—SWORD’s former base of operations, orbiting around the Earth. The last time we saw it, the Apocalypse Twins destroyed it. I’m sure that’s not going to come up at all. The Peak is the biggest sword the X-Men have in their arsenal, and it will be a blast (also probably literally) to see how they use it in X of Swords.

We also know most of the Sword Bearers at this point, and we know the names of the Swords—but there are some we haven’t heard of before. The most mysterious one is the Twilight Sword, which initially split Krakoa in two. In Thor, the villain Sutur uses something called the Twilight Sword, but we don’t know if it’s the same one. The sword also looks a little too much like the Cerebra Sword that Magneto crafted for Xavier after the original Cerebra helmet was destroyed in an assassination attempt. he

The biggest question mark hovers over Saturnyne. Is she a friend or foe? Just a reminder—Apocalypse is, as far as we can tell so far, the good guy of X of Swords. So, who’s looking forward to the next 21 chapters?

Click the Series/Issue numbers for more info on the comic from League of Comic Geeks.

X of Swords Chapter One: Creation