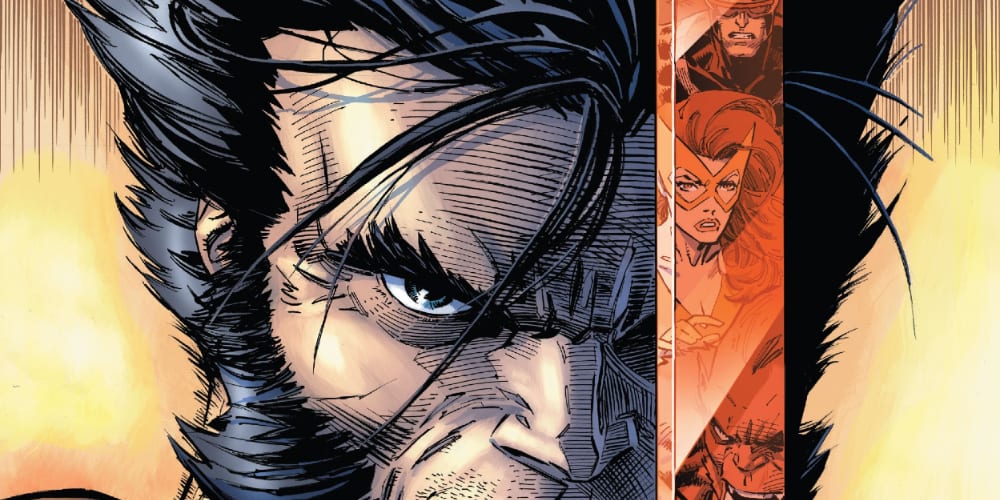 In the previous two chapters, Saturnyne turned the entire tournament on its head. Instead of sword fight after sword fight, the matches included a wedding, a drinking contest, and an arm-wrestling match. X-Force #14: X of Swords Chapter Seventeen carries this on, offering up even more bizarre matches that are seemingly designed to ensure that the X-Men lose the tournament. However, two challenges really stick out—and both will have lasting repercussions. And one that is just wonderfully rewarding. But first, let’s look at the strange, random ones.

The Many Challenges in X-Force #14: X of Swords Chapter Seventeen 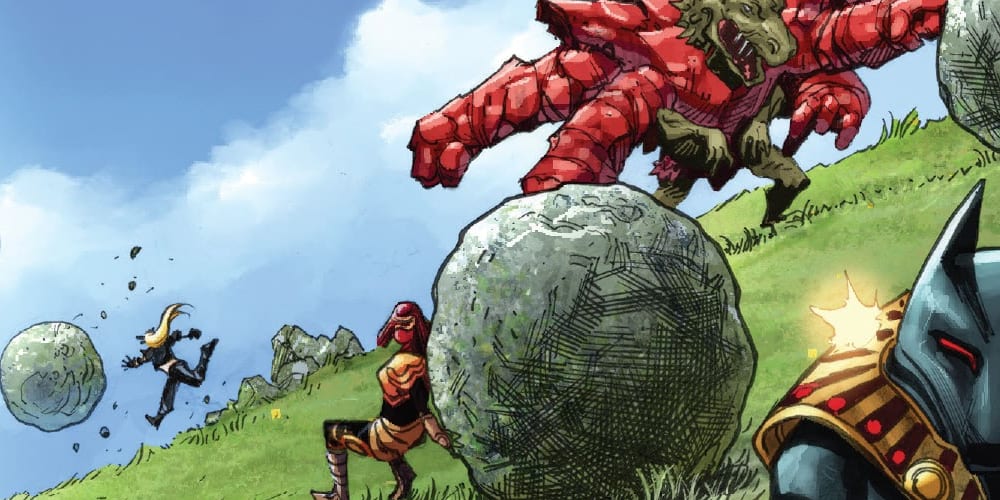 Think Pogg-Ur-Pogg and Magik’s arm-wrestling match was weird? Or Wolverine and Storm’s drinking contest? Well, compared to the other challenges Saturnyne sets up for the Arakkii and Krakoan warriors, that’s a bit traditional. Throughout X-Force #14: X of Swords Chapter Seventeen, we see some weird and downright arbitrary battles. And in a good handful of them, Saturnyne just wants to embarrass Wolverine. She’s still not over the whole “Wolverine tried to kill me” thing. Now, let’s look at the odder challenges.

Who doesn’t love some good old medieval torture? Cable, Captain Avalon, and Gorgon test their manly abilities to withhold pain against the Horsemen of Death—and all three fail. Considering that War recently lost her son and her hand, this shows just how strong-willed she really is.

Remember Sisyphus? He’s that ancient Greek character who Hades punished to keep rolling a hill over and over again. And every time the boulder was about to reach the top, it would roll back down, and he’d have to start over. Thankfully, that is not the case for Pogg-Ur-Pogg, Isca the Unbeaten, Death, and Magik. However, it’s another one that the X-Men lose in X-Force #14: X of Swords Chapter Seventeen

Battle Beneath the Waves

Isca, The White Sword, and Gorgon vs sea monsters. Not only do we already have Isca involved, who literally can’t be beaten, but putting the battle underwater gives Gorgon a huge disadvantage. Because of his powers, he has to stay blindfolded, relying on sound. But underwater, sounds are altered and muffled. And so, the X-Men lose again.

An Eating contest. One of the battles for all reality’s fate in X-Force #14: X of Swords Chapter Seventeen is an eating contest. Saturnyne farces Redroot, Cable, Cypher, and Captain Avalon to eat the foulest-looking things imaginable. But maybe this attempt to humiliate Captain Avalon failed—he, along with Cable, really seems to enjoy the “food.” The X-Men win!

Lord of the Dance 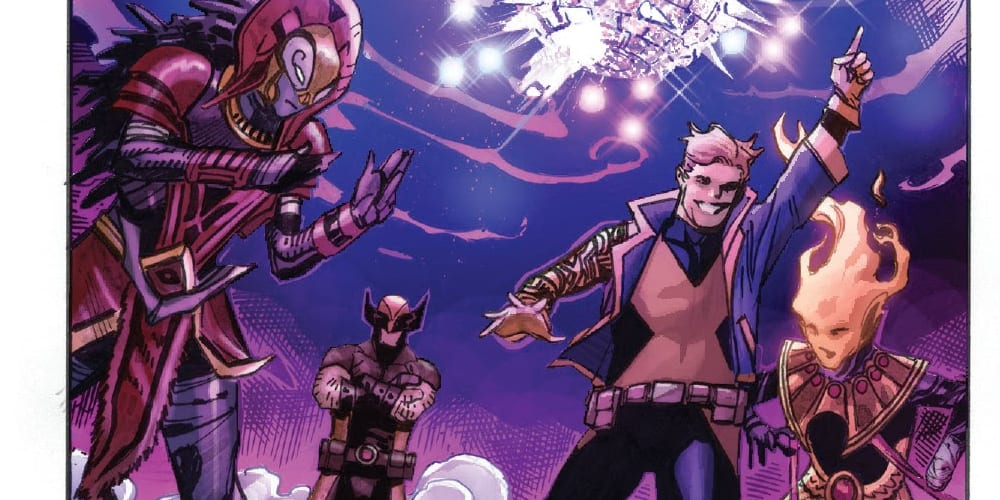 Is Doug literally doing the Dougie? Note: I have no idea what that is. (Image: X-Force #14, Marvel Comics)

We follow the gross eating contest with a dance floor. Bei the Blood Moon and War face-off against Cypher…and Wolverine. Despite Cypher seemingly busting some sweet moves (and maybe impressing his new wife), Wolverine doesn’t even try, and the X-Men lose again.

This one might be a little more traditional—a maze! Redroot, Pogg-Ur-Pogg, Storm, and Captain Avalon compete to find the way out. Maybe Pogg-Ur-Pogg ate the labyrinth, considering that once again, Arakko won. Also, putting Storm, someone who is claustrophobic, in a maze? Come on, Saturnyne.

This one is hilarious. On one side, we have Gorgon and Magik. On the other side, Death and War. So, both Gorgon and Death have masks that cover their eyes, rendering both of them useless. But even if War and Magik are equally saddled with their bling(ish) teammates, one of them has to be the Puzzle Master! And that winner is…Magik!. The X-men finally get another point. 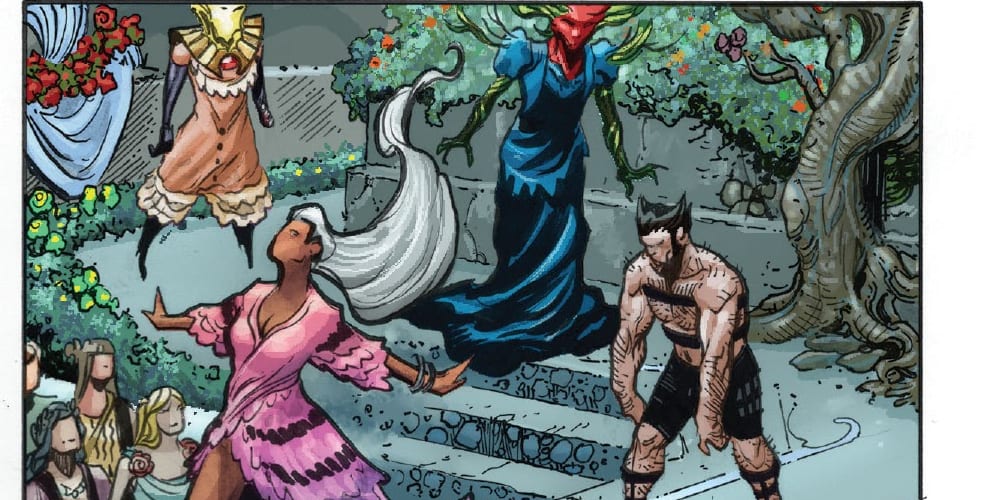 Well, this isn’t Project Runway, but it is a runway battle. Who has the most glam? Who is the most stylish? Who can, literally, strut their stuff? Is it Storm? Redroot? War? Or…Wolverine? Yeah, this is basically another chance for Saturnyne to humiliate longan in X-Force #14: X of Swords Chapter Seventeen. And since Wolverine doesn’t really have that vogue skill, Arakko wins.

In the same realm where Wolverine killed Summoner last chapter, Saturnyne makes the champions navigate their way through that hell. Cable and Magik are woefully lost, but it wouldn’t matter even if they were doing well. Isca is their opponent. The point goes to Arakko, obviously.

A spelling bee. Saturnyne has reduced some of the most powerful, skilled warriors in all reality to competing in a spelling bee. And the word Magik gets and spells wrong? What super-difficult word did she misspell, costing Krakoa another point? Magic. She spells it as she spells her name.

This might be the cruelest challenge in the entire challenge, not just X-Force #14: X of Swords Chapter Seventeen. Saturnyne puts Wolverine and the White Sword—the two best killers on either side—in front of a magical mirror. In this mirror, they are forced to look at every person they’ve ever killed. The first to look away loses. By the third panel, both are struggling—and Wolverine looks away first. 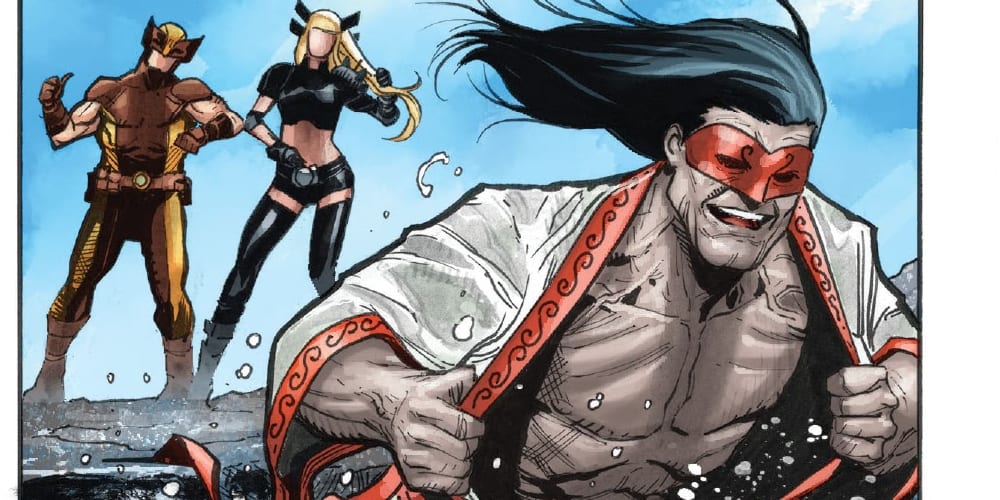 In the Odyssey, Odysseus and his crew must sail past the sirens, beautiful women with a song that entices men to go to them, never to be seen again. But in Otherworld, there are the rock sirens of Clevermore. These giant stone whales also sing a song to lure people away. Wolverine and Magik look at the rock sirens in bemusement. Assumingly, War and Isca also saw the giant singing rocks and decided to pass. But Gorgon…well, as he runs towards the rock sirens, Wolverine delivers one of the best lines in X-Force #14: X of Swords Chapter Seventeen. It might be one of the best lines of this entire event:

I think Gorgon’s going to #%&@ that boulder.

Yeah. It’s exactly as it sounds. Captain Avalon and War must kill a kitten. War wins because, well, obvious reasons. Could you do it? 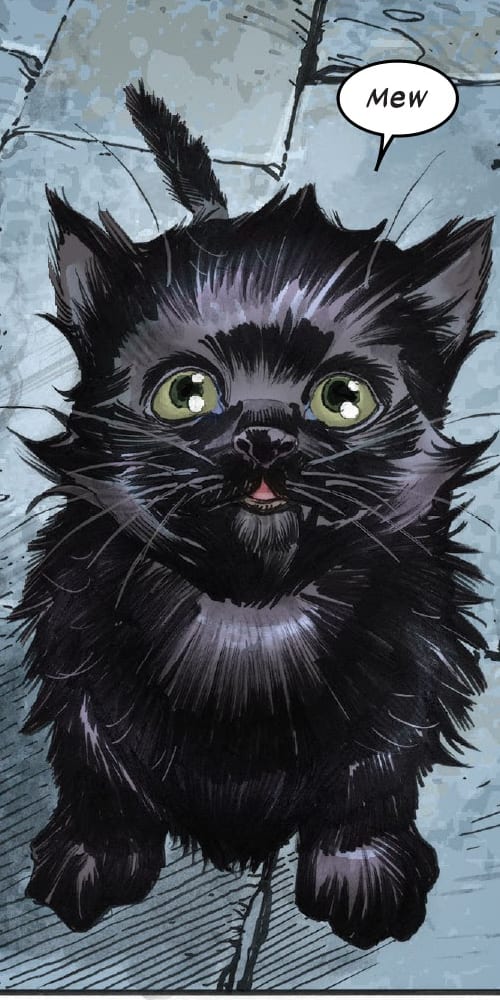 Those make up most of the battles in X-Force #14: X of Swords Chapter Seventeen. However, there are three more we need to cover. One is kind of important. Another is very important. And the third is…

Previously, Saturnyne made Magik compete with Pogg-Ur-Pogg in an arm match. If that wasn’t unfair enough, their second match, at the beginning of X-Force #14: X of Swords Chapter Seventeen, is a regular brawl. Magik is about the size of Pogg-Ur-Pogg’s arm. Not one of his four giant arms, either, but one of his two little T-Rex arms. Pogg snatches her up and swallows her whole. And Magik is completely fine with this. She figured out something important about Poggy. The word “pogg” in Arakkii means “sword.” Pogg’s body is actually a massive suit protecting the real Pogg within. This guy: 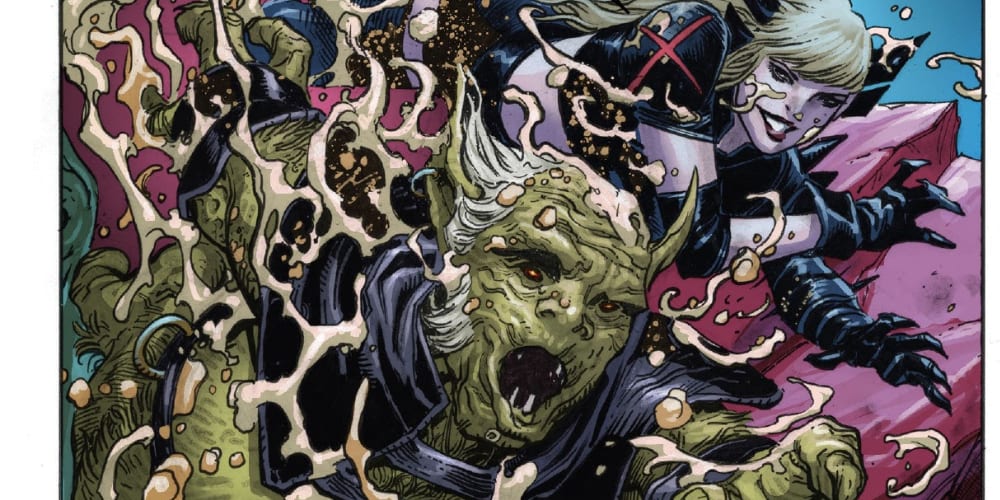 Strangely enough, this is how my last relationship ended. (Image: X-Force #14, Marvel Comics)

And from there, Magik trounces him, though she doesn’t kill him. She probably figured he was embarrassed enough. That just leaves two more battles for X-Force #14: X of Swords Chapter Seventeen.

Saturnyne Continues to Torture Captain Avalon for Declining the Role of Captain Britain in X-Force #14: X of Swords Chapter Seventeen.

At first, the challenge seems simple enough. Redroot and Captain Avalon just need to race through the Crooked Market. First one to the finish line wins. But then, just as they start and Brian Braddock is smugly in the lead (Redroot is a tree, after all), Saturnyne sets Furies on him. Not the Greek ones, however. The robotic creatures are from the Everforge, the hottest place in the multiverse. They battle and subdue Captain Avalon just long enough for Redroot to win. In the meantime, they blasted and fought their way throughout the Crooked Market.

But everything in the Market has a price, so Avalon faces the debtor’s prison. However, Saturnyne overs to intervene—if he asks for her help. Since we see Captain Avalon in other battles after this one, we can assume he did just that. And now, he probably owes Saturnyne—the last person you want to be in debt to.

He’s not the only one the Mad Jim Jaspers screws over. As Redroot wins, a priceless crystal “happens” to fall and shatter. Jaspers tells Redroot that she needs to pay for the crystal, but it was priceless. So, to pay her debt, Jaspers shrinks her and puts her in a jar. Yeah, Otherworld is pretty messed up. However, Redroot is to Arakko what Doug is to Krakoa—she speaks for the sentient island. Therefore, this might not end well for Mad Jim. But she still got the point for Arakko.

X-Force #14: X of Swords Chapter Seventeen Reminds Us, Once Again, That Storm is a Badass 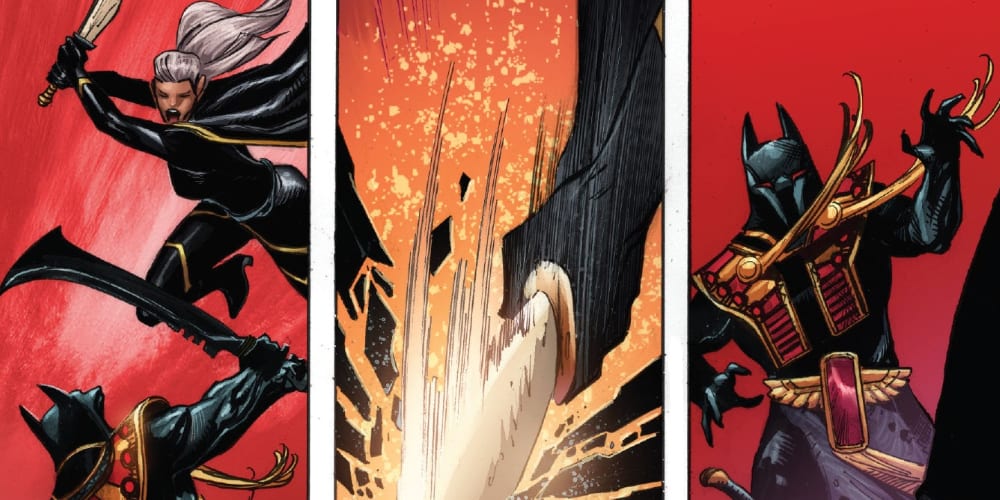 She did warn him at the Parley Dinner. (Image: X-Force #14, Marvel Comics)

In the previous chapter, Death paid Mad Jim Jaspers to poison the alcohol that Storm and Wolverine used in their drinking contest. It weakened and even impaired Wolverine’s healing ability. For Storm, the poison eventually muted her powers and left her weary—right in time to battle Death to “first blood.”

Yeah, Death should have studied up on his rivals because he would have known that Storm doesn’t need her powers. In fact, she once defeated Cyclops and became the leader of the X-Men while her powers were gone. She humiliates Death. Even when Death decides he’s had enough and tries to use his death glare on her, Storm looks away, raises her sword, and uses the reflection to send it back to Death, stunning and injuring him. However, this also gives her the chance to stab Death straight in the chest as his face burns.

So, X-Force #14: X of Swords Chapter Seventeen was madness and read like a whirlwind. A brilliant whirlwind. But we still have some big showdowns left. And so far, Saturnyne hasn’t made Apocalypse or Annihilation compete in any challenge. Again, what is she up to? Her realm will burn if the X-Men lose. And right now, well, they aren’t doing well: 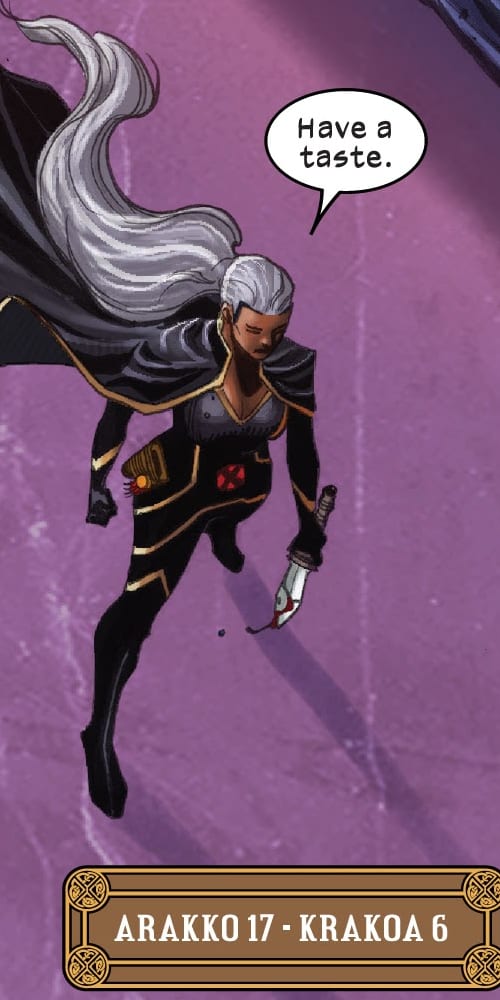