Home » GAMING » PC » The Lord of the Rings: Return to Moria 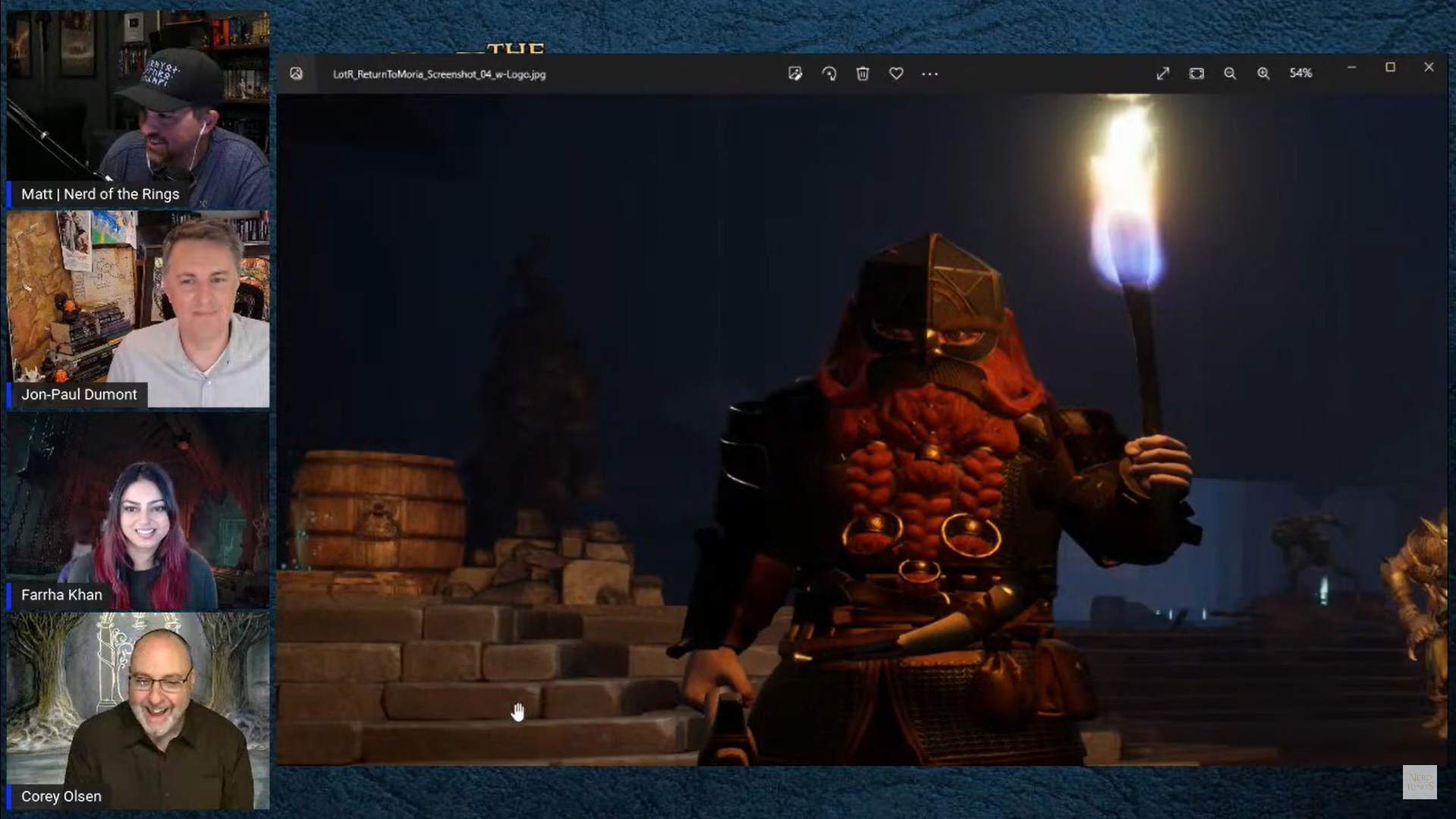 With the end of The Rings of Power, fans are left waiting again. We don’t have much news about a new season. So, the video game industry appears to be the next step. I’ve already covered the Gollum video game. But, LotR: Return to Moria is another huge title.

Recently, Embracer Group bought the rights of LotR. That leaves a lot of fans speculating about where the franchise might go. But, the Dwarf-driven survival game surely knows where to take things.

Earlier today, October 25, Nerd of the Rings had an interview with the developers. You can watch the entire thing below:

In it, they reveal a lot of news about the upcoming game. For instance, it doesn’t have a release date yet. But, we can expect it sometime in 2023. It’ll also be a classical survival and crafting game.

Of course, they had to avoid spoilers. The dynamic gave way to funny moments, as developers tried to avoid certain points. But, we do know that it’ll center around exploring the ruins of Moria. Plus, we’ll get a unique look into the lore of Lord of the Rings after the fellowship.

Now, let’s summarize the most important bits of the interview. As always, you can also check out the game’s official page for more details.

An opportunity to expand the Dwarven lore

Explore the ruins and mysteries of Moria.

Perhaps, the most exciting part of LotR: Return to Moria is learning more about the Dwarves. In the movies, we only really see Gimli represent his people. Sure, The Rings of Power expands their lore. But, it’s still not much.

For the game, the developers had to read everything Tolkien wrote about the Dwarves. During the interview, they reveal that they had dedicated book clubs. They also read different translations of Tolkien’s work.

Regarding the story, we only know it takes place after the destruction of the ring. Essentially, the world is starting to heal. Orcs aren’t as big of a menace. And, Gimli has claimed that “the time has come” to recover Moria. 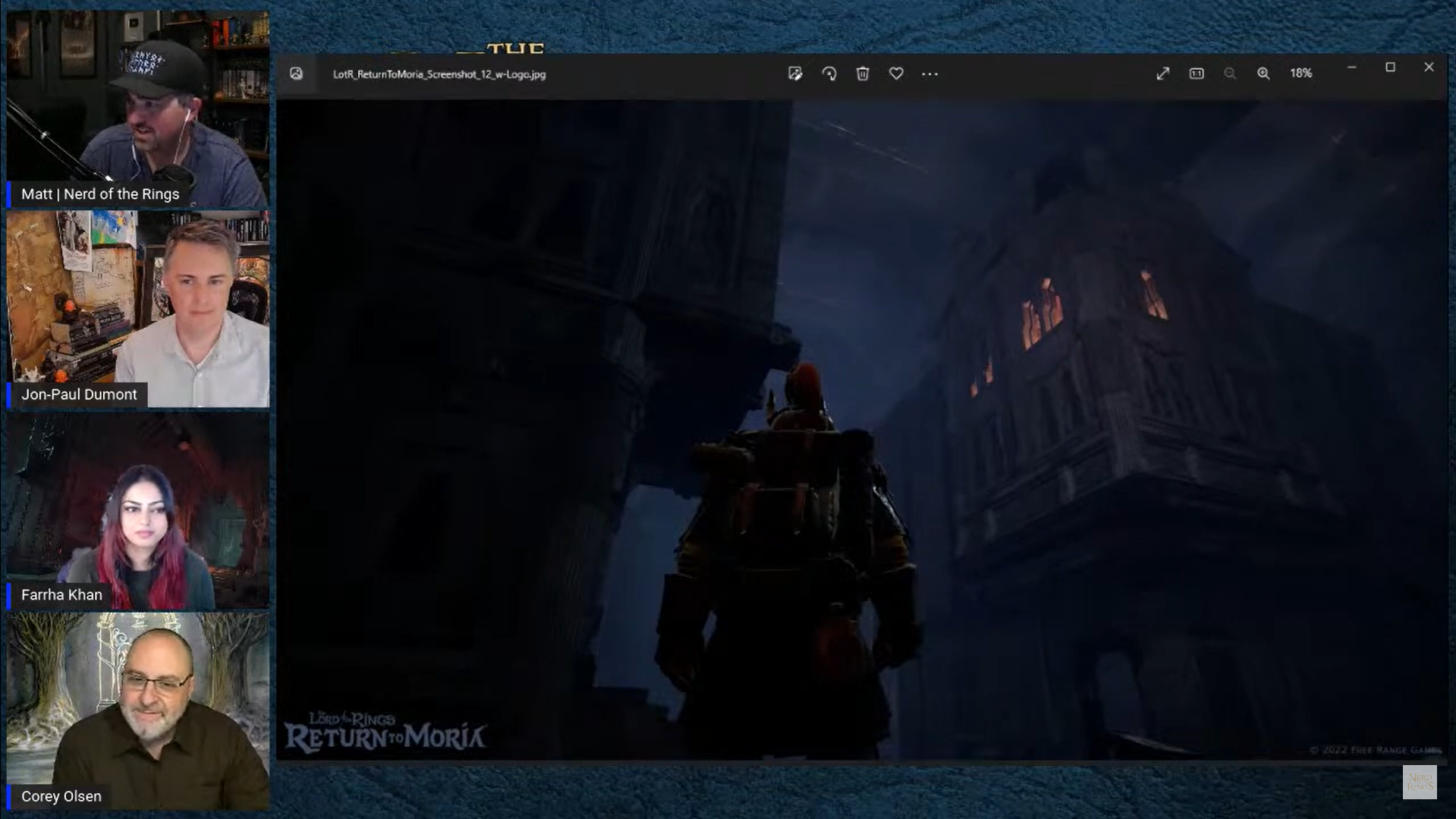 The post-apocalyptic look of Khazad-dûm environments.

The team spent a lot of time ensuring that the game feels like a real Tolkien story. They constantly asked the art team to point out sections of the books that inspired them. The goal was to stick solely to Tolkien’s depictions.

However, there was one challenge. Dwarven lore is very scarce. Most of Tolkien’s work is arguably from the elves’ point of view. Even in the books, the author prefers to keep Dwarven history a mystery.

The team’s objective was to get into the Dwarves’ mindset. And, the players will embody Dwarves rediscovering their story in Moria. That includes exploring the Durin lineage and Dwarven theology.

Speaking of Durin, he’ll play a central part in the story. One of the biggest questions is why hasn’t another Durin come when needed. We also learned that Durin’s axe will be a central plot point. 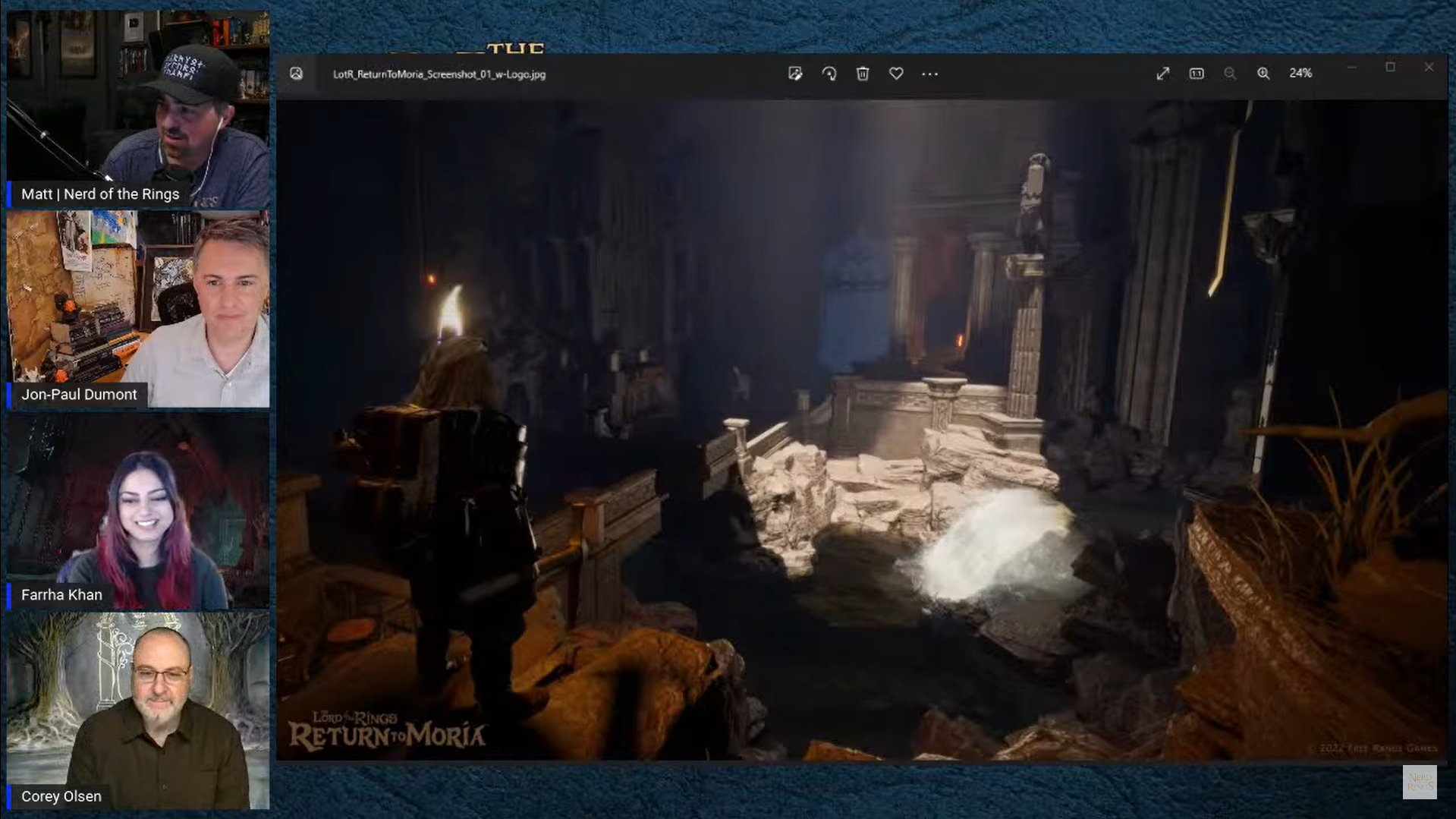 A pickaxe and a torch are everything a Dwarf needs to start their journey.

For the gameplay part, we’re in front of a classic survival game with a twist. Think about games like Minecraft, The Forest, or Valheim.

Players will need to explore Moria, gather resources, and craft tools. They’ll need to settle in the game’s world. The same goes for eating, hunting, and completing a major quest.

One of the most exciting bits of information we got was Gimli. Players will likely meet him in the game—among other prominent figures. However, the team assured us that they’re only focusing on Dwarves. So, don’t get too hyped to see other races.

In the game, Gimli is a somewhat prophetic figure. He visited and returned from Moria. So, he’s a vital figure in the game. In fact, he’s the one who claims that the time has come. And, players are following that calling. 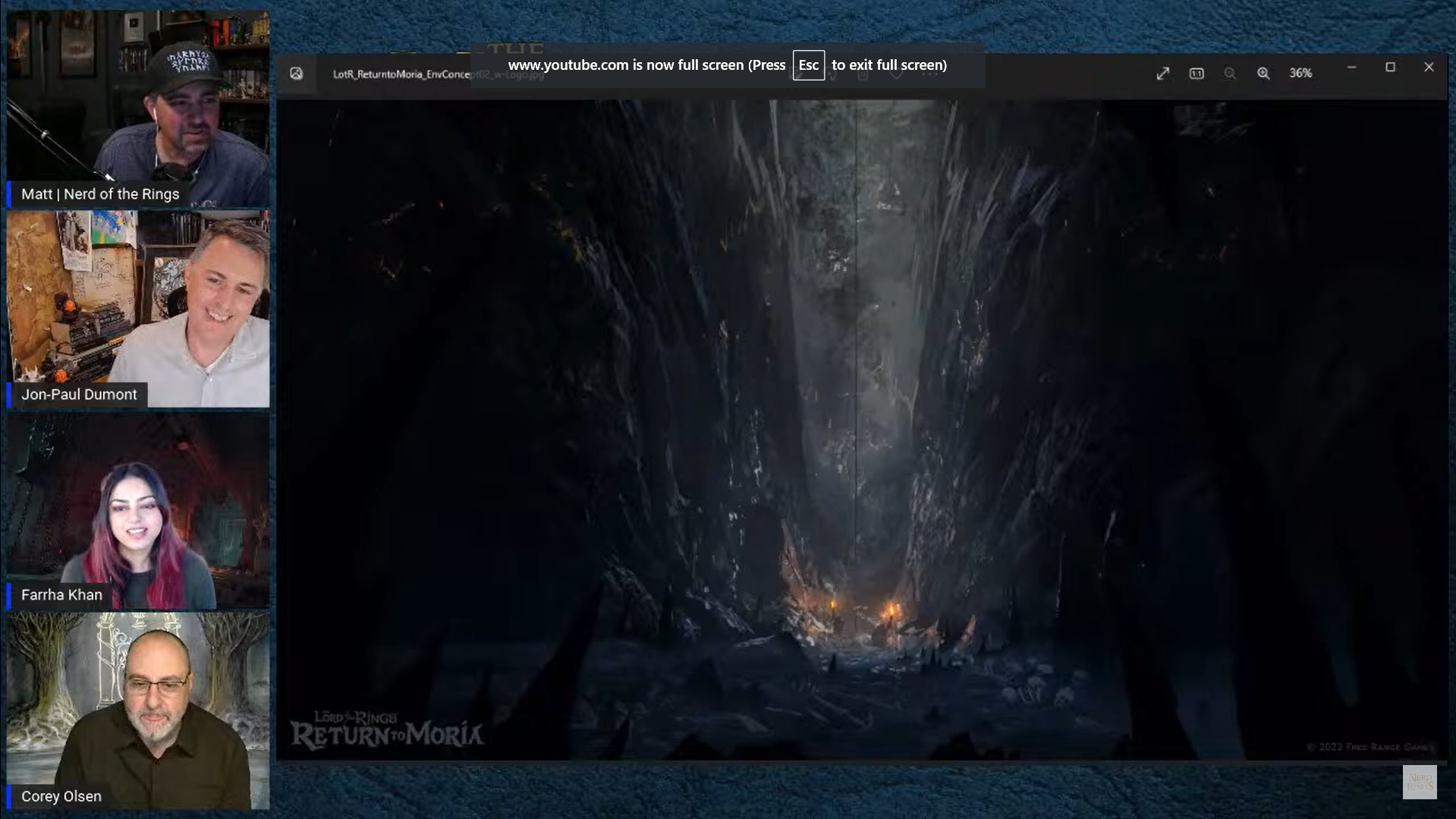 Dwarves are here to bring light to the depths.

Now, Dwarves don’t enjoy the darkness. Actually, they aim to bring light to the underground. A lot of the gameplay revolves around rekindling Moria’s flame. To that goal, players will have to explore and craft their way. That’s how you’ll solve most obstacles.

Speaking of obstacles, the darkness houses a lot of dangers as well. You’ll run into orcs—which are an intriguing story bit. You’ll find out what happened to them after the ring’s destruction. That includes their power vacuum and how different factions formed.

But, they’re not the only risk. From stone golems to nameless things, there’s a lot to keep you on your toes.

Both solo and co-op gameplay with up to 7 friends 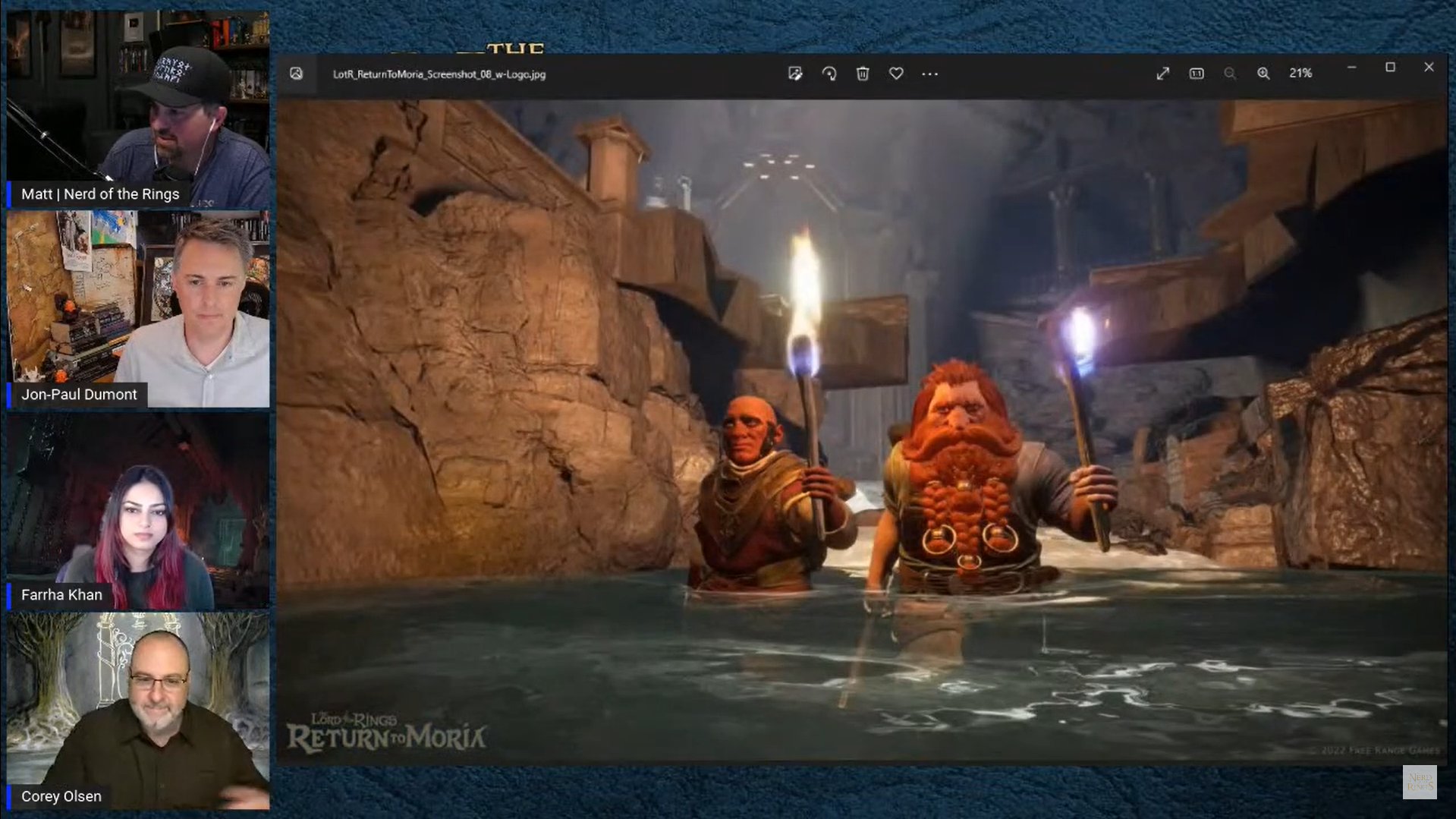 Friendship is as important for players as it is for Dwarves.

Now, Dwarves are known for being hermits to other species. They don’t like to reveal their secrets. That’s true for their history and even their language. But, they value fraternity and close bonds.

What better way for players to experience it than multiplayer?

LotR: Return to Moria will support co-op gameplay for up to 8 players. You can visit the host’s world and help each other progress through the game. Players can even bring their own resources and tools. That way, you’re always helping each other progress.

The developers are also looking for ways to let players save their progress. Dedicated servers are an option. But, they’re still researching. 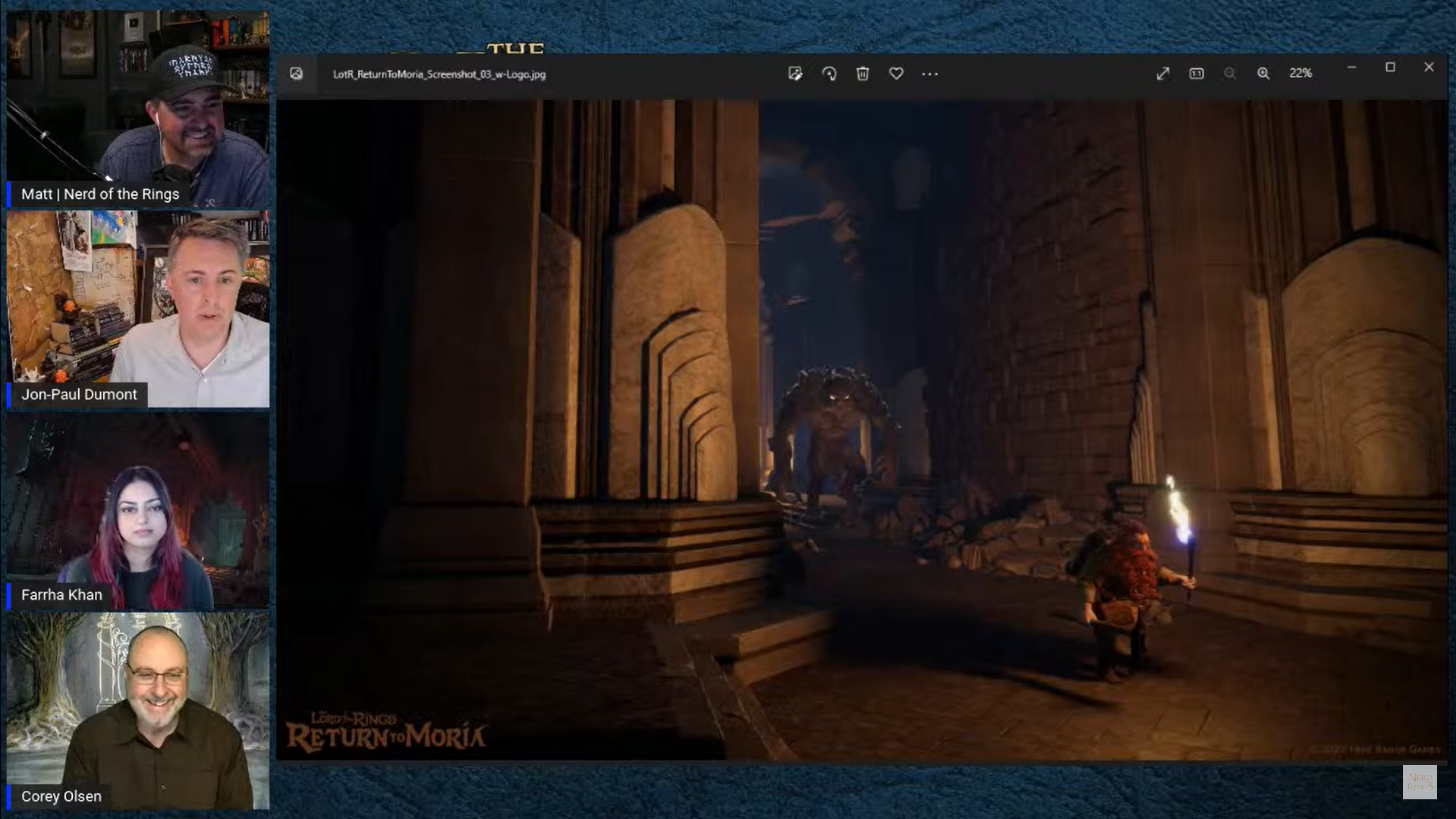 It’s not always the best idea to go alone into the depths.

That takes us to character creation. Your party will be truly unique. That’s because character creation is a huge plus. You can choose where your character comes from, which affects their look. The same goes for accents and even beard styles—including females!

Of course, that means things can be easier with friends. Although, the developers did mention that created more room for peril. An interesting example was the songs. You can chant with your mates. But, it might attract unwanted attention. 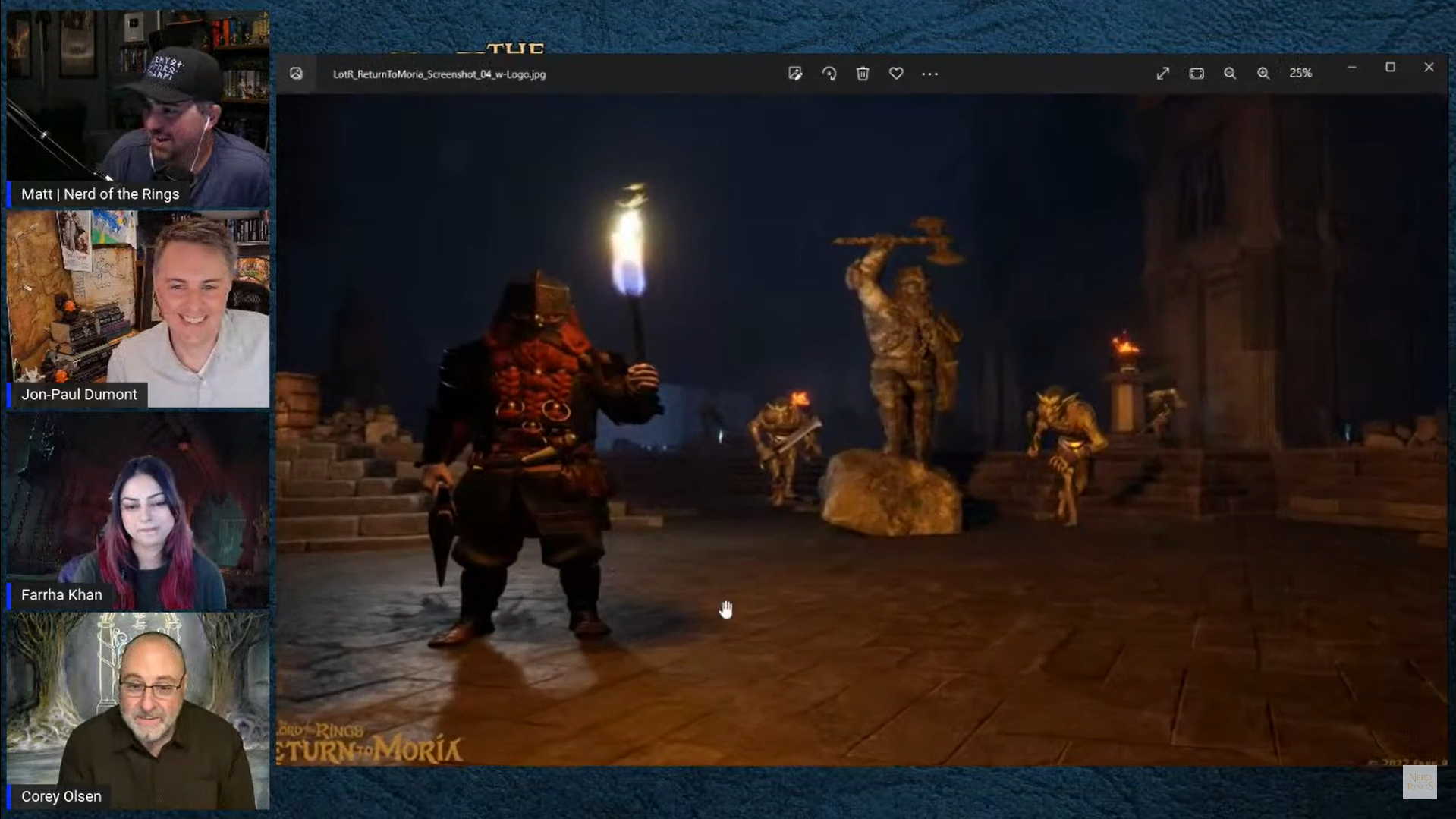 Of course, the main attraction here is to become a Dwarf yourself. That’s why character creation is so in-depth. Nevertheless, that’s not where things end. You’re on a journey to rediscover your people.

You’ll get to immerse yourself in the world, especially with friends. As mentioned, you can chant different songs with your party. Feasts are another example. Sure, you could roleplay a Dwarven feast with your friends. But, this time, it has gameplay functionality and benefits.

Essentially, coziness is how you can fend off the darkness of the world. 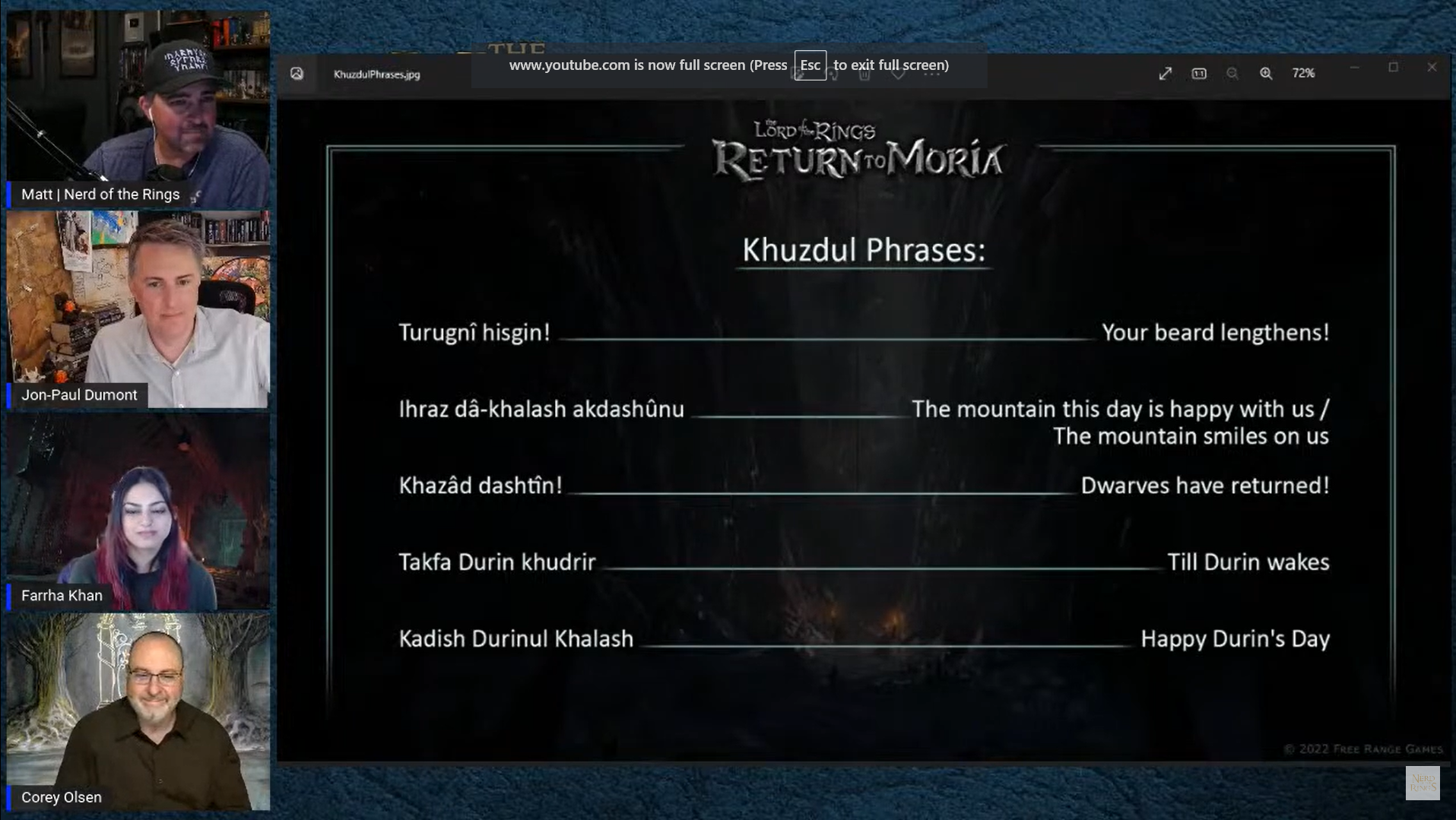 The developers introduced Khuzdul phrases specifically for the game.

But, becoming a Dwarf is more than creating a character, having feasts, and chanting. You’ll get unique insight into the Dwarves’ history and even language. Above, you can see some of the Khuzdul phrases that will appear in the game.

Curiously, Moria is a procedurally-generated world. That means everyone will experience something different. New adventures with friends won’t look the same as your own.

This feature lends itself to that feeling of rediscovering Dwarven history. So, it plays a key role in letting you become a Dwarf.

That’s because you know little about crafting at the beginning. Players find new crafting recipes and blueprints in the world. You’ll have to rediscover ancient technology and crafting techniques. You’ll need to reuse forges.

Embracing your ancestors’ work is the way forward in this game.

LotR: Return to Moria merging gameplay with the old and new history of Moria 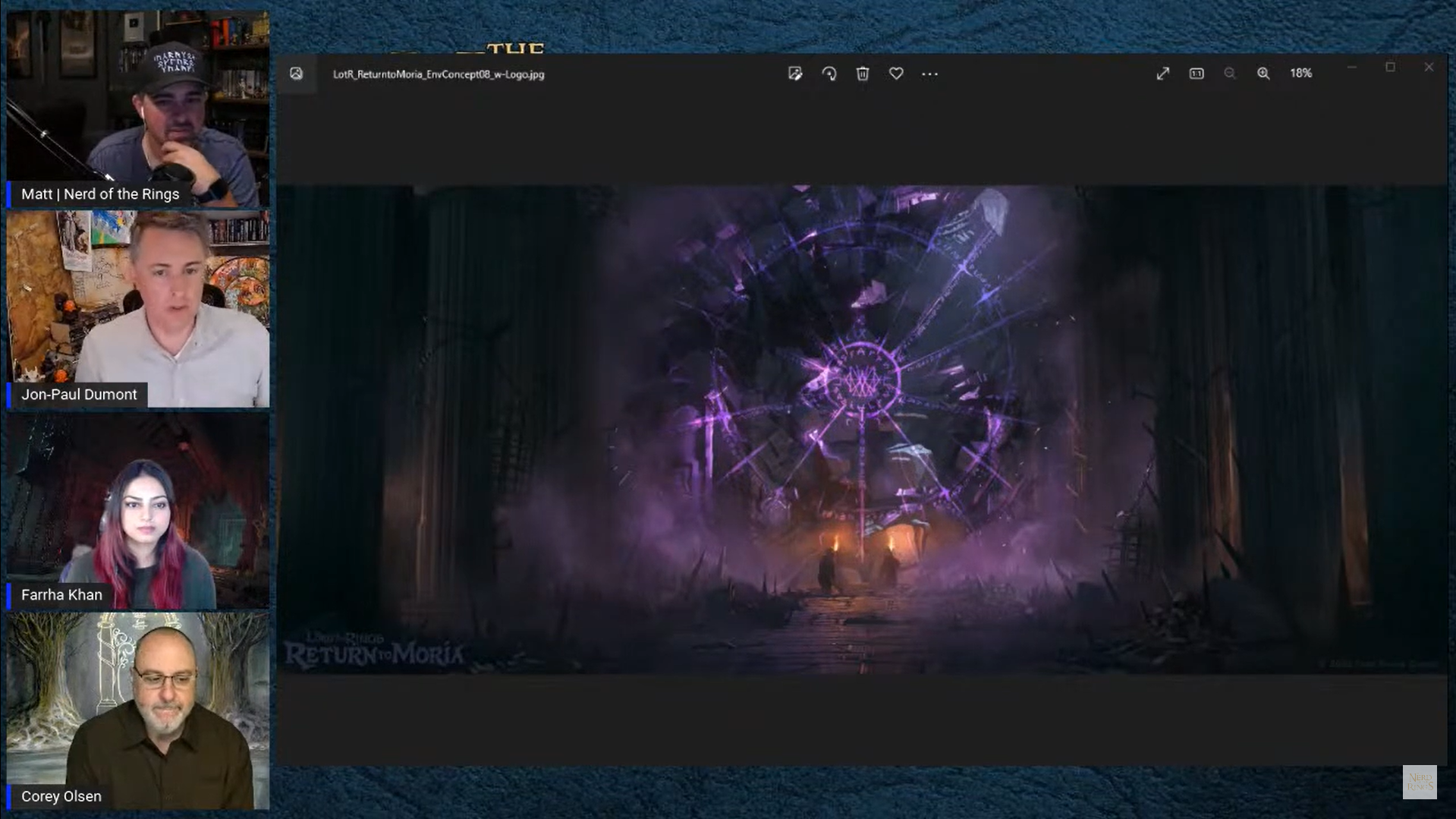 What are these mysterious runes? Where did they come from? No one wanted to say.

In the end, LotR: Return to Moria is all about exploring the Dwarven lore as one of them. The world will be open for players. But, you’re still uncovering the secrets of Moria while forging its new history.

To that end, the team had a huge announcement to make. Durin’s axe will be one of the primary story elements here. Players will have to find out what happened to it. Maybe you’ll find it. But, they also talked about reforging the axe.

Let that settle for a second before continuing.

Of course, that also ties to the lore of Lord of the Rings. Players can run into evidence of Balin’s expedition, which found the axe. You’ll have to find out why they were looking for it and what happened.

You’ll even find evidence of Gandalf and The Fellowship’s visit to Moria. One of the developers even mentioned you can find Pippin’s pebble! 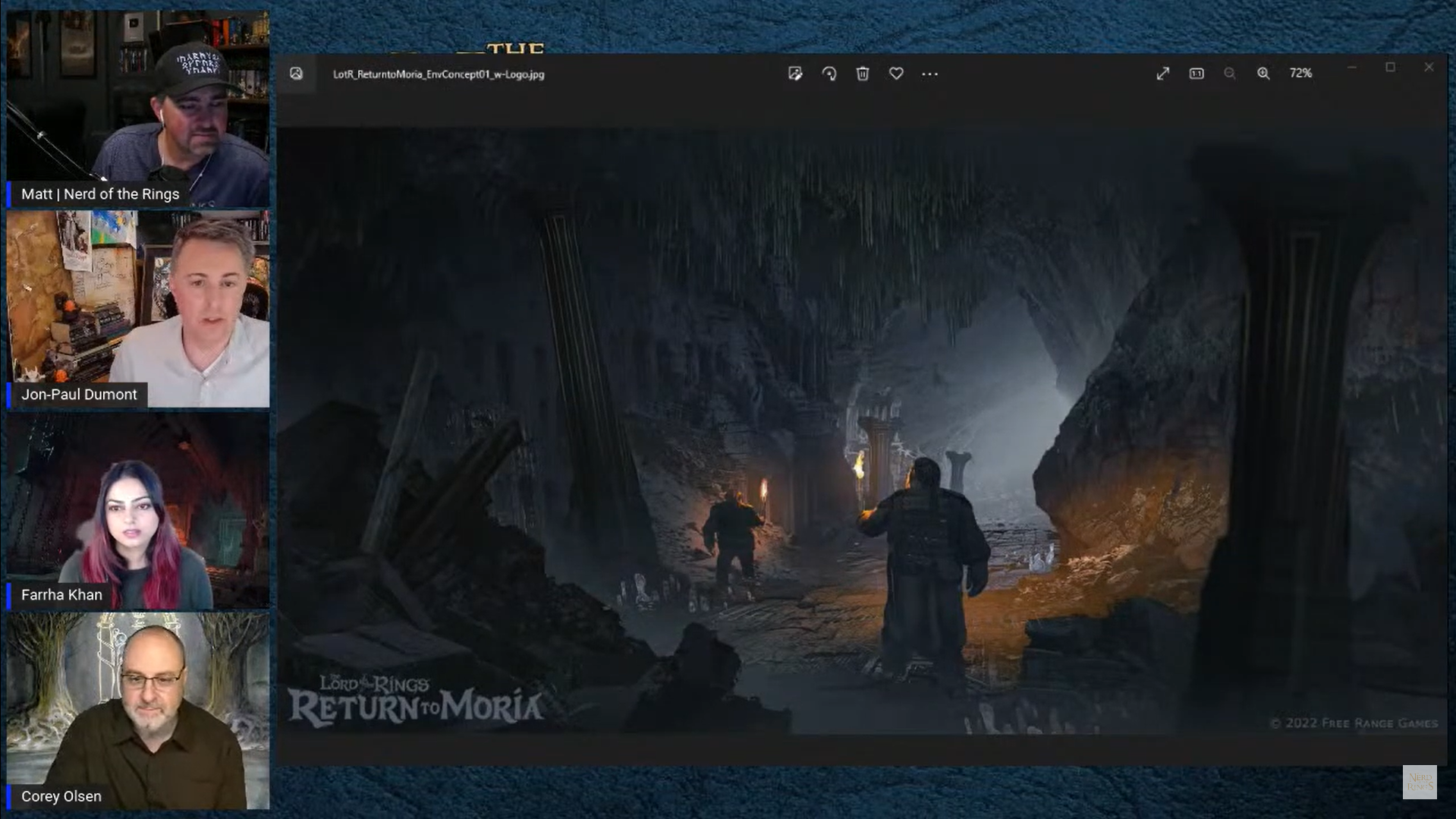 Forge the new history of Dwarves and Moria.

That said, the most intriguing element is discovering what happened with Moria. Remember: this is a post-apocalyptic scenario. You’ll be in the aftermath of The Balrog’s awakening. Maybe its magic was responsible for those runes you can see above.

You’ll be traversing through dilapidated buildings and monuments. It’s up to you to discover what happened to the Dwarves during the crisis. What did they leave behind? What exactly happened?

Plus, a post-apocalyptic setting means dealing with raiders. This game isn’t different. Orcs and many other inhabitants made a home out of the ruins of Moria.

Moreover, Moria isn’t the same cave over and over again. The game has different biomes and environments. Each one has its dangers and mysteries. Perhaps you’ll have to travel a lot to find certain resources.

In the end, it’s your job to clean up and rebuild Moira. Are you ready for it? Do you think you can rekindle its flame? I know I’m doing my best as soon as the game comes out!

Ant-Man And The Wasp: Quantumania Plot Easter Eggs And Details Revealed In The Trailer
House of the Dragon Season 1 Review