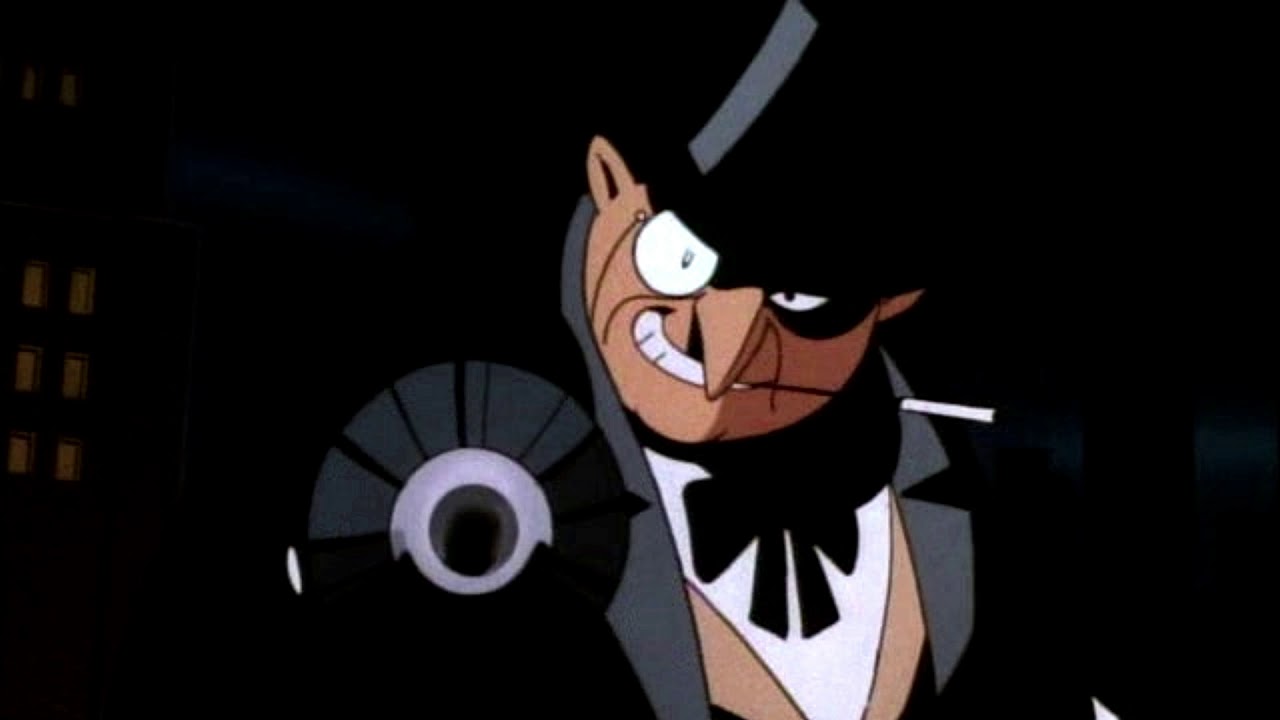 One of the evilest villains in DC Comics is the eccentric and dangerous “Penguin.” Batman’s arch-rival is one of the villains who most frequently appears in the comics and different movies and series.

We tell you what we know about “Penguin,” Oswald Cobblepot’s alter ego. Let’s see this character’s story, which has again come to light in the movie The Batman by Matt Reeves and is getting his own series on HBO Max.

Penguin is one of DC Comics’ super villains, undoubtedly one of Batman’s oldest and most tenacious enemies. The character was born in Detective Comics #58 in 1941 to Bill Finger and Bob Kane as a way to put Batman in constant trouble.

According to his creators, the character was inspired by the mascot of a cigarette advertisement, “Kool.” It was a penguin with a top hat and cane, evocative of emperor penguins, who Finger thought represented high-class gentlemen in tuxedos. 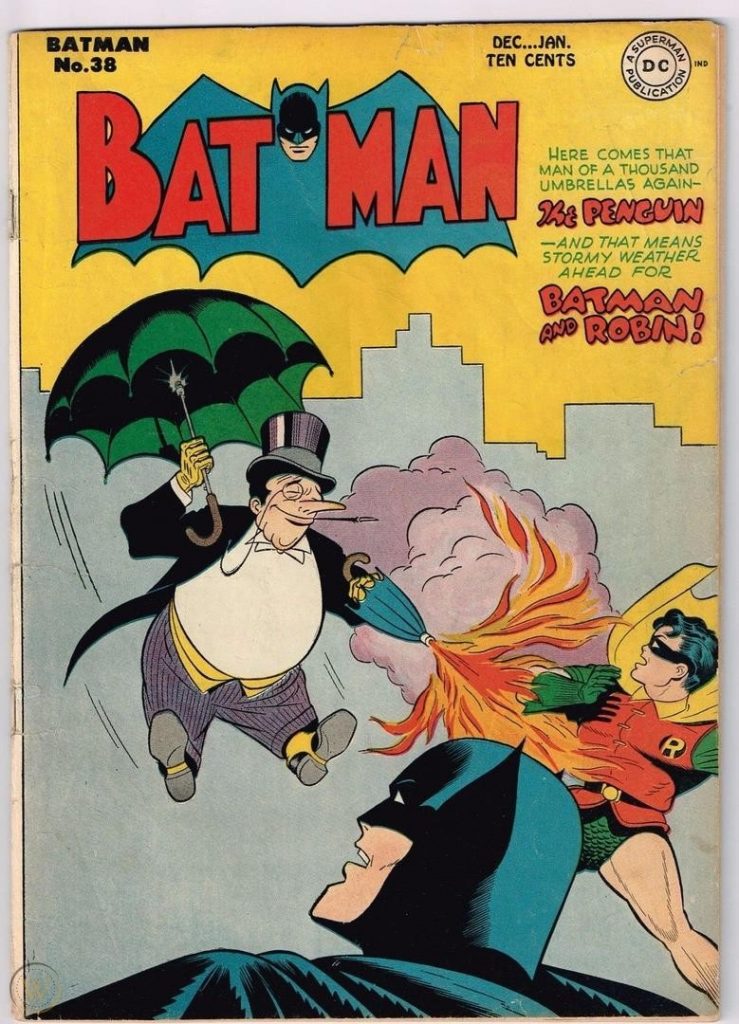 His nickname is Penguin, but his real name is Oswald Cobblepot. Cobblepot is known as the crime lord of the fabulous Gotham City, and whose deformed physical appearance gives him a macabre touch.

As a child, he was shaped by the ridicule of his stature and deformed appearance, forging his character. As an adult, Penguin inspires respect and fear thanks to his great criminal exploits. His nickname comes from a childish mockery of his grotesque appearance and passion for birds.

Versions of the story tell that Oswald becomes a criminal after his mother dies and his pet birds, which he considered his only friends, are seized to pay his debts. On the other hand, others refer to him as an outcast in his high-society family, whose rejection leads him to become a criminal.

When he first tried to join a gang, he was teased for his umbrella and was scorned for his penguin-like appearance before being expelled from the criminals’ lair.

This rejection gave rise to making a name for himself to fear through “The Penguin,” turning his umbrella into a deadly weapon. His first umbrella was a .45 caliber, which he used to kill the crime lord, claiming the leadership of the criminals, who were terrified by this fact.

From his origins, we can see that the Penguin pursues his criminal career with class and style, preferring formal attire when committing his crimes, which makes him stand out from the other criminals.

With this criminal genius, anything is possible. Far beyond his appearance, Penguin has managed to become the master of Gotham’s underworld, operating from his nightclub, the Iceberg Lounge.

Something that does not go unnoticed is his skills and his genius-level intellect. Although he has no superpowers, he has not needed them so far. Penguin has a fencing ability with his weapon of choice, the umbrella, which has given him more than one victory.

Penguin has leadership qualities that have earned him the respect of his henchmen and a respected crime boss in Gotham. All this has given him a place in different criminal organizations, from the Injustice League to the Suicide Squad to the Secret Society of Supervillains.

This comic book character controls his actions and possesses a self-mastery that has allowed him to maintain a unique relationship with Batman, the Dark Knight. An expert criminal strategist, Penguin uses his intellect to gain wealth and power. His only drive is his self-interest, using wit, cunning, and intimidation to exploit his surroundings.

Penguin’s appearance is not at all graceful. His personification is of a short and thick man who uses an umbrella as an accessory. This one is not just any umbrella; it is one specialized in high technology and which he uses as a tool to commit his misdeeds.

His deformed penguin-like physique stands out for his beak-shaped nose, short stature, and shapeless and clumsy body, giving credence to his nickname, which he wears with pride and has become a sign of identity. His fingers are joined together, giving rise to hands resembling a penguin’s flippers.

Despite this unpleasant appearance, The Penguin is one of the most dangerous villains to fight body to body. He has enough knowledge in boxing and judo to defeat any attacker, even if he is larger than him.

His usual weapon is the different modified umbrellas with lethal gadgets hidden inside, such as blades, machine guns, missiles, flamethrowers, lasers, and acid or poison gas devices.

As a child, he was forced by his over-protective mother always to carry an umbrella. That was due to his father’s death from pneumonia. That inspired him to turn his usual accessory into a weapon.

The most frequent is an umbrella that can transform its canopy into a series of rotating blades that becomes a mini-helicopter, or attack weapon, which he uses when he feels threatened. Also, the widely used umbrella contains a spiral pattern on top, which he uses to hypnotize his enemies.

Almost always, The Penguin plans crimes but often does not commit them. He counts on his henchmen like Beefy, Carmichael, Bossworth, Hammer, Jay, Lark, Louie, Raven, Tongs, and others, who are in charge of fights and dirty work. However, that does not detract him from taking lethal and aggressive actions on his own, especially when provoked.

Penguin is Featured in:

There have been multiple appearances of The Penguin in TV series and movies, which has earned him named one of the best Batman villains, being a great villain of the comics.

There are several TV series that have personified the Penguin. One of these has been the 1960 Batman, played by Burgess Meredith, the best-known incarnation of the character for some fans.

The last Batman animated series also introduced alternate portrayals between a high-profile aristocrat and a deformed outcast. In the prequel series Gotham, the Penguin appears as one of the main characters, portrayed by Robin Lord Taylor. His character is a ruthless petty criminal who, in the beginning, works for the mobster Fish Monney, starring Jada Pinkett Smith. This series shows The Penguin’s rise to power and his entire journey. 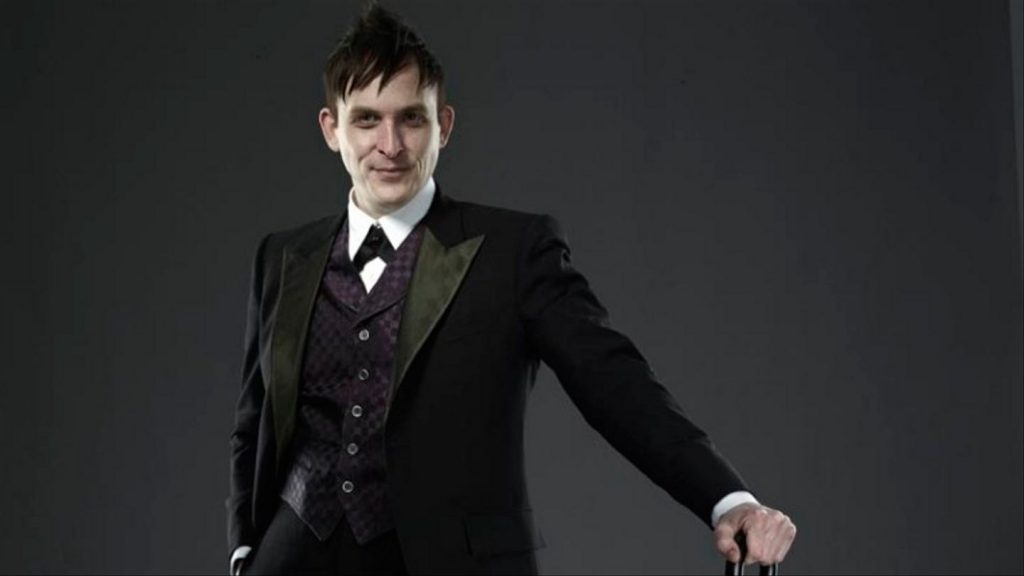 He also appeared in the miniseries Batman: The Long Halloween. The Penguin made a cameo at the end, where he did not have any dialogue but still had an impact.

In the DC Comics animated universe, in Batman: The Animated Series, the Penguin character is presented with physical deformities, a beak-like nose, flippers, and retaining manners. Penguin makes several appearances and is the only one who does not have to tell his origin story, aside from Joker. 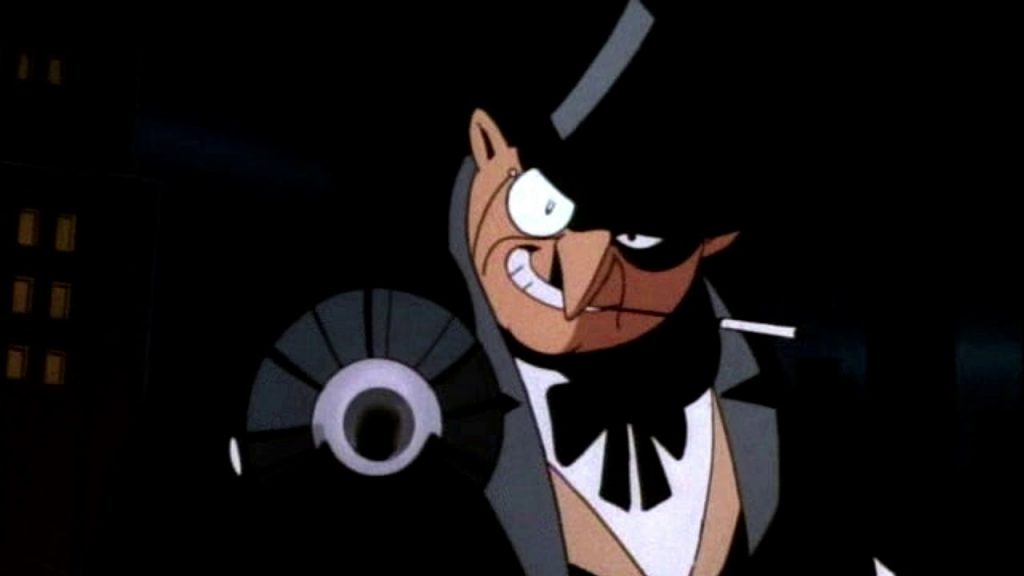 In the original animated series, The New Batman Adventures of 1977, The Penguin appeared as his traditional comic book portrayal. This version of Penguin was the legitimate businessman and mob boss of “The Iceberg Lounge” nightclub.

In Superman: The Animated Series, The Penguin appears in the episode “Knight Time.” Superman, disguised as Batman, and Robin, interrogate Penguin to find the Mad Hatter.

Batman: The Brave and the Bold, the Penguin, is introduced in the voice of Stephen Root, appearing in Bat-Mite fantasies. In Aquaman’s Extravagant Adventure, Batman ends up dealing with the Penguin’s crimes. And so on in many other episodes, where superheroes are forced to fight with this villain.

References to Penguin in Other Shows

The Bad News Birds are birds trained by the Penguin and are the enemies of Krypto and Ace in Krypto: the super dog animated series. Penguin does not appear in this series, but he is referenced.

The Penguin also appears in the DC Super Hero Girls episode, voiced by Alexander Polinsky. The version presented is that of a student of Metropolis High School, which executes a series of evil plans and blackmails other students into helping him.

In the episode “Double Cross” of Justice League Action, Dana Snyder plays Penguin, where he hires Deadshot to take out Two Face.

Other series mention him, his club, or his penguin costume as references. In Batman Beyond, Batman displays his outfit in the Batcave in the episode “Black Out.” In Justice League Unlimited, his club appears in some scenes. In Beware the Batman, we find several mentions of Penguin.

Among the films where The Penguin appears are the 1992 Batman Returns, played by Danny DeVito, and has been the most grotesque and dark version of the Penguin. More recently, Colin Farrell took on the role of Penguin for the movie The Batman, the new version directed by Matt Reeves and starring Robert Pattinson and Zoë Kravitz. Farrell’s transformation and performance as Penguin were so good that he earned his own spin-off on HBO-Max. In Joker, a novel by Lee Bermejo and Brian Azzarello, The Penguin became known as “Abner.” Penguin embodies his operation at the Iceberg Lounge, handling much of the protagonist’s investments and dealing with the proceeds from boxing matches.

In Batman: Crimson Mist‘s third part of the trilogy, where Batman became a vampire, The Penguin is one of the many criminals Batman kills. Batman succumbed to his darker instincts, ripped the throat of the Penguin, drank his blood, and decapitated him, thus trying to ensure that he would not return as a vampire to kill.

In Batman Earth-One, by Gary Frank and Geoff Johns, The Penguin doesn’t respond to this nickname but Oswald Cobblepot. However, the media refers to his “penguin” suit. In this graphic novel, Penguin becomes Mayor of Gotham, with a more normal appearance, who tries to orchestrate the deaths of Martha and Tomas Wayne. Cobblepot’s plan fails, but the Waynes die that same night in a random assault

Who is Penguin? Why is he so Iconic?

The Penguin is as a tortured soul whose childhood was difficult, and his relationship is more than complex with the Dark Knight, Batman. At times he is an endearing villain; other times, he is a loyal ally of the Bat; and at others, he is a sinister character with excesses of cruelty.

Despite this, Penguin displays range from dark facets to others where he shows love, as in that adventure where he allies with Batman to confront Bane. The real motivation is that Bane murdered Penny, with whom Penguin has fallen in love. In the Joker graphic novel, Penguin appears with Violet. Falling in love with her, Cobblepot locks her in a cage when she tries to leave him. 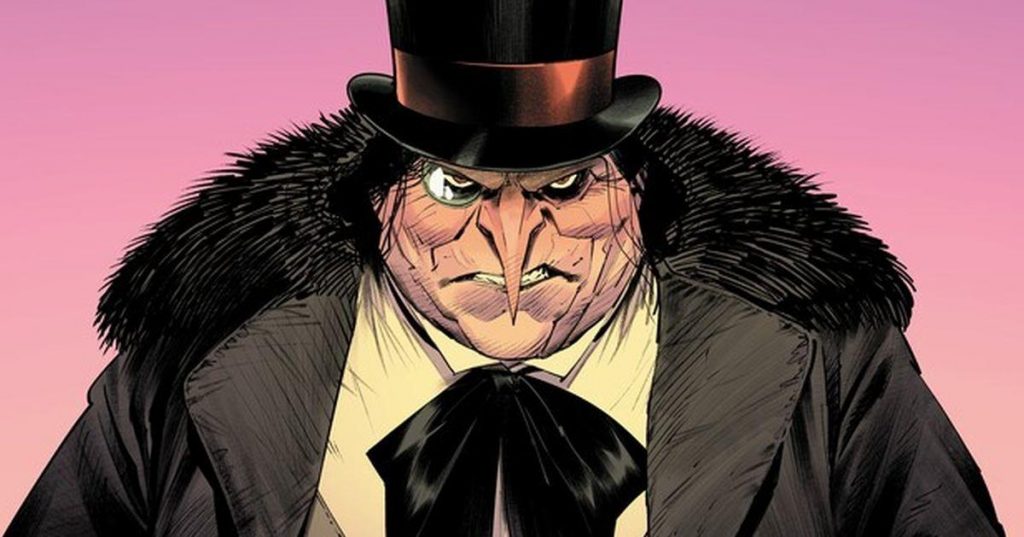 In any case, Penguin is the most feared crime lord in Gotham and continues to present himself as one of Batman’s iconic rivals. Despite an appearance that seems to have no place in modern stories, he remains one of DC’s most compelling characters.

His character is fascinating, and I think we will continue to see him among superheroes and villains.