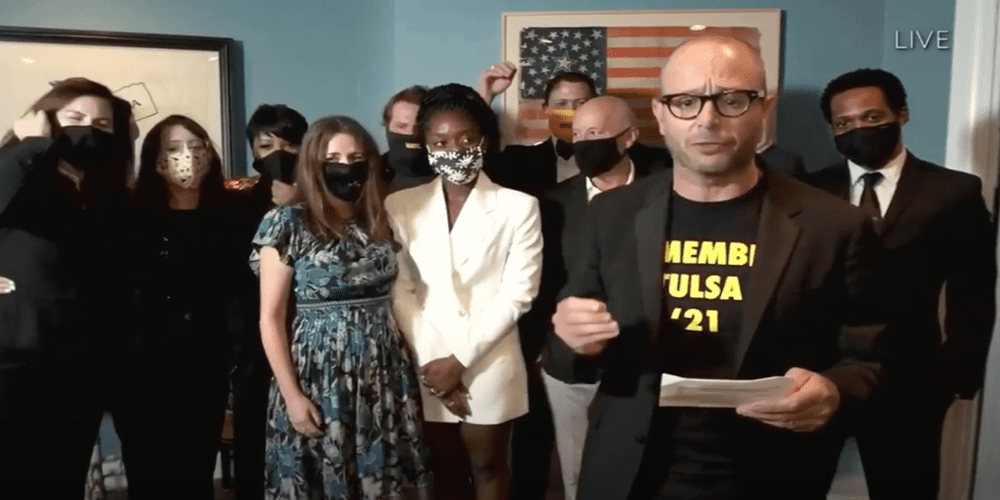 Watchmen series creator Damon Lindelof put together one hell of a show. The racial tensions explored in the series feels prophetic for the year we ended up having. The early 2020 hit with critics and fans seems like a lifetime ago. Since its airing, we’ve experienced real-life racial protests and conflict as well as a much-needed public conversation about racism. A huge element of these conversations is tied around forgotten tragedies. Forgotten might not even be the right term; more like silenced, hidden, tucked-away realities that we’ve ignored. A huge event central to Watchmen‘s story took center stage in a touching Watchmen Tulsa Massacre tribute that took place during the creator’s Emmy acceptance speech. Donning a “Remember Tulsa ’21” shirt, Lindelof didn’t allow the moment to be lost in the thank you’s and gratitude of a traditional speech. Instead, Lindelof used the speech as a Watchmen Tulsa Massacre tribute to honor those lost in the real-life event. The creator said in his speech that “History is mystery, it is broken into a million puzzle pieces and many are missing.” This is a direct reference to the massacre depicted in the show as a catalyst for many characters’ lives. The Tulsa Massacre isn’t taught in many K-12 classes and many adults don’t even know about it. It seems insane considering 300 died and a huge row of Black-owned businesses and homes got destroyed. Then again, America is good at forgetting this part of its history.

As Lindelof mentioned in his speech, it’s uncomfortable to talk about these things. It’s also dire for a society seemingly waiting to burst at the seams with frustration, tension, and hopelessness. There’s not a necessarily uplifting twist to Watchmen‘s treatment of the massacre. Yet, seeing the ways in which society approaches race felt dystopian enough to engage with as an audience. If we can slowly approach issues like these more realistically, then we’ll be too late. A “now or never” vow from creators like Lindelof go a long way.

I’m as happy as anyone that Lindelof got a win for Watchmen. As he mentioned, however, this wasn’t his story to tell. This is a culmination of conversations from many individuals and actors he mentions in the acceptance speech. In short, Lindelof told the story well, but it’s more than him. The life of Watchmen series on HBO took new meaning on Juneteenth weekend and in the wake of the George Floyd killing and continues to develop in real time. As our country braces for an election season unlike any other, in the midst of a pandemic nonetheless, we wait anxiously and unassured about what’s to come.

After three seasons of nearly perfect TV on The Leftovers, Lindelof earned his moment. He used it to uplift voices and issues that don’t get nearly enough time in the public consciousness. The vows to become anti-racist this Spring faded as a pandemic and politics kept American memories short. Ideally, we’d continue to take moments to make these sorts of statements to keep the conversation alive. In short, Watchmen the series can help with that in the future as more watch it. Overall, Lindelof the creator helped keep the energy alive in a moment that could have been about him and his work.

Overall, what did you think of the speech from Lindelof? If you have thoughts, then let us know in the comments!

Shazam 2 Director Poll Asks Who You Want to See in Fury of the Gods!
Did The Bethesda Xbox News Impact Pre-Orders For Series X and S?