Watching The HBO Watchmen Series On Juneteenth Weekend: No Clarity

A much-maligned tweet went out this week promoting an interview with a writer from Watchmen discussing the current American moment in the context of the series. Part of what set people off, other than Twitter being a hell-site, is that the author said the show “predicted the news” we’re experiencing right now. When HBO made their Watchmen series free on Juneteenth weekend, everyone had the chance to weigh that claim on its own merits. That said, the show doesn’t really provide clarity for the real-world as it exists today, at least not in terms of specifics. Yet, the themes throughout the series are incredibly relevant to “right now,” but only because what’s happening in America now is, in one way or another, a long time coming.

The themes in Watchmen aren’t that subtle. Shared trauma, the erasure of history, white fragility, grievance, and (a Watchmen standard) authoritarianism. All these things are incredibly relevant at the moment. In fact, all these ideas play a role in the current discussion around the statuary dedicated to “Confederate War Heroes” littering America like a bunch of left-behind participation trophies.

Watching the Watchmen HBO series this Juneteenth weekend, what struck me most of all was how Damon Lindelof and the rest of the storytellers created a world in which white fragility and grievance make more sense than they do in the context of the world we actually live in.

The following will be full of Watchmen spoilers and uncomfortable politics, so tread forward armed with that knowledge for when you finish and have feelings. The great trick of sci-fi stories is the way they can work in uncomfortable or unpopular sociopolitical commentary without the audience realizing it. This has been the case since H.G. Wells assailed the proletariat with The Time Machine. Throughout the history of Watchmen stories, one theme has remained constant: masked vigilantes are authoritarian nightmares or clowns. In the HBO version of the story, the way this point-of-view clashes with race is so obvious it makes it seem like this was the point of the story all along.

The way the HBO Watchmen series retcons the origin of Hooded Justice is a master stroke. It makes the hangman’s noose make so much more sense than it would otherwise. The rage and injustice that fuels vigilantism also makes so much more sense in the context of the black American experience, where justice almost doesn’t exist. This rage consumes the character and ultimately destroys his life, near-permanently estranging him from this family. And this character was born in the fire of the very real 1921 Tulsa massacre. It all feels flawlessly true in the way that only excellent fiction can.

Also, this character’s trauma flowed through the other members of his family, including Regina King’s Angela Abar. It showed, from how they both wore makeup to how their anger, hurt, and consequences of the tragedies visited upon them connect through time, albeit intangibly. It gives people a new metaphorical vocabulary to understand this concept in the context of race that so many resist because of how it threatens their understanding of their own personal histories and traumas. Bigotry is itself like a secret identity. You can be likeable, compassionate, and even friends with people who you see as the enemy when you’re alone and you don your mask.

The Role of White Supremacy in the HBO Watchmen Series 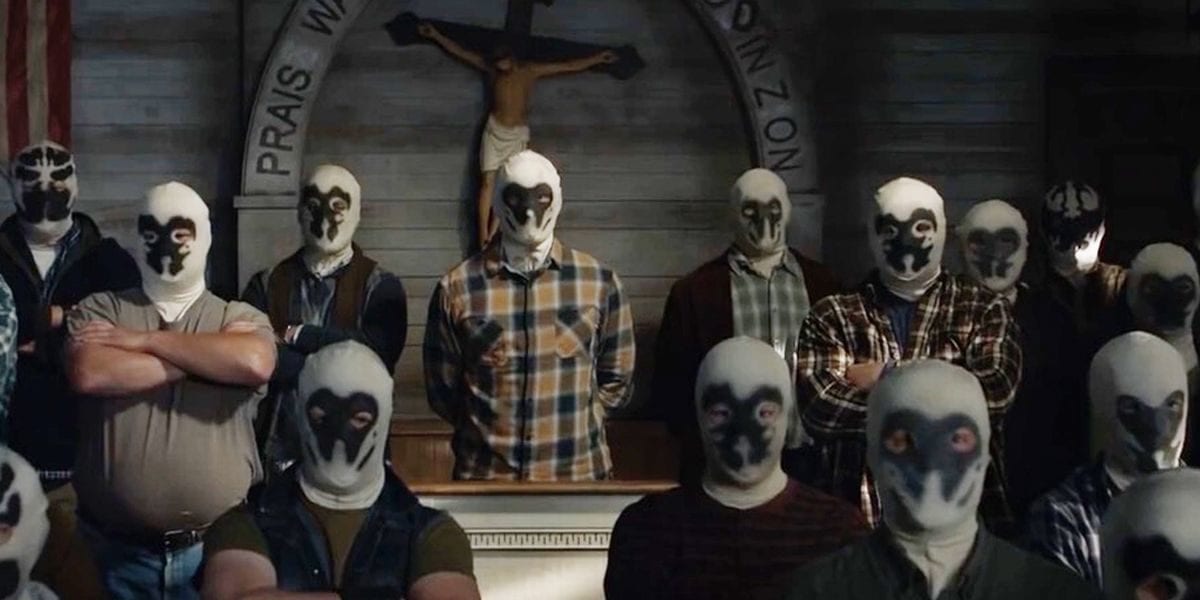 When the show first debuted, I was caught up in two ways: How it advanced the larger mythologies of this corner of the superhero multiverse and the narratives surrounding the black characters. Ironically, while rewatching the HBO Watchmen series over Juneteenth weekend, I finally noticed the way that the storytellers gave their white supremacist antagonists something to be angry about.

Whereas the original Watchmen had Richard Nixon as the figurehead of conservative authoritarian power, this version has Robert Redford, elected seven years after the events of the comic. While he’s not examined as closely as Nixon, Redford created a world that disarmed America, put restrictions on police, and figured out reparations. The only “ghetto” the show visits in modern America is one populated exclusively by white people. The delightful Jim Beaver is in the show for just one episode, and he hits up Angela (the black woman who adopted his grandchildren) for money.

As Senator Keene, James Wolk delivers a speech about “white oppression” that sounds like everything Tucker Carlson says nightly. Except in the real world, not nearly enough has changed when it comes to racial equity. The fact that black Americans in the Watchmen world are doing okay for themselves is enraging to the racists of Cyclops, the KKK, and the 7th Kavalry. It’s this part of the series that is truly prescient for this moment. In the real world, there are citizen uprisings regarding police abuse. The aforementioned removal of racist monuments.  And, the beginnings of a discussion about how white privilege poisons society. The people “mad” about this moment are saying the same things Keene did in the show. Unlike the literal comic book villains, however, real-world bigots are not complaining about anything real.

Authoritarianism Is at the Core of Every Watchmen Story

People point to the liberal/Democrat and conservative/Republican divide in this and the comic version of Watchmen. Yet, just like with the Lindelof-penned The Hunt, the political “sides” don’t really matter. They are just representative of a blue team and a red team working at odds with one another. Political leaders and masked vigilantes alike in these stories are authoritarians. They see the world in black and white, and their “enemies” get no quarter.

In Tulsa, Oklahoma, where most of the show takes place, even the Redford-ized police force gets to be authoritarian because they are able to hide their identities and thus escape accountability. The cops, including Abar, are all authoritarians. Abar beats the shit out of a suspected 7th Kavalry member to get the location of their hideout. Just like Rorschach and the Comedian used violence to meet their goals. Even though the show gives him every reason to do it, Will Reeves’ ultimate victory against the Cyclops is an extrajudicial murder-spree.

Right now, America seems to be yearning for authoritarian populist control, especially in light of the racial reckoning we’ve been putting off generation after generation. And the old adage is the warning of Watchmen: Absolute power corrupts absolutely. It’s why it’s perfect the show ends the way it does. If we know that Angela Abar now has Dr. Manhattan’s power, and she takes her grandfather’s advice to “do more,” she runs the very real risk of becoming a tyrant in her quest to change the world for the better.

The show offers us much, but what it doesn’t give us is clarity about how to effectively bring real-world justice. A superhero story is supposed to offer a hopeful (if simplistic) victory for the good guys. Watchmen doesn’t let us off the hook that easily.

Watchmen is available on HBO Max

Did you rewatch the HBO Watchmen series this Juneteenth weekend? What did you notice the second time around? Tell us in the comments below.