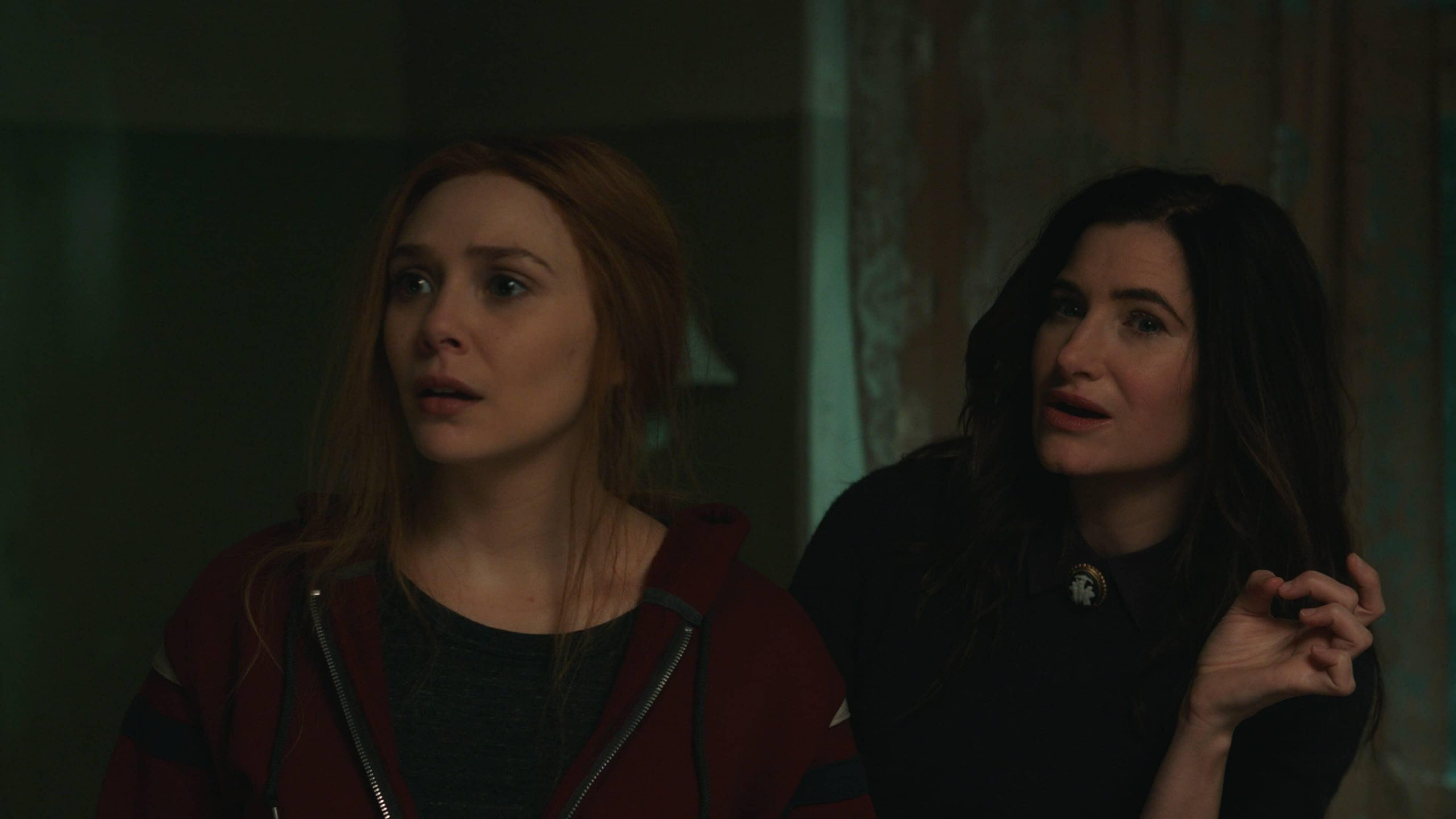 2021 has brought us nothing but questions and forced us into hours of prediction-making. And it’s all because Marvel continues to throw us head-scratching storylines week after week with WandaVision. Whether you’ve loved these mysterious episodes or not, the series has finally decided to start giving us more answers than we grew prepared for. WandaVision episode 8 has arrived, and the clock is ticking before the finale next week. So, let’s dig into what the heck is going on.

This guide to episode 8 of WandaVision will be filled with spoilers. If you haven’t watched the episode yet, we recommend bookmarking this and heading over to Disney+ to give it a stream. You can also revisit our summary of WandaVision episode 7 to refresh your memory of where we left off! 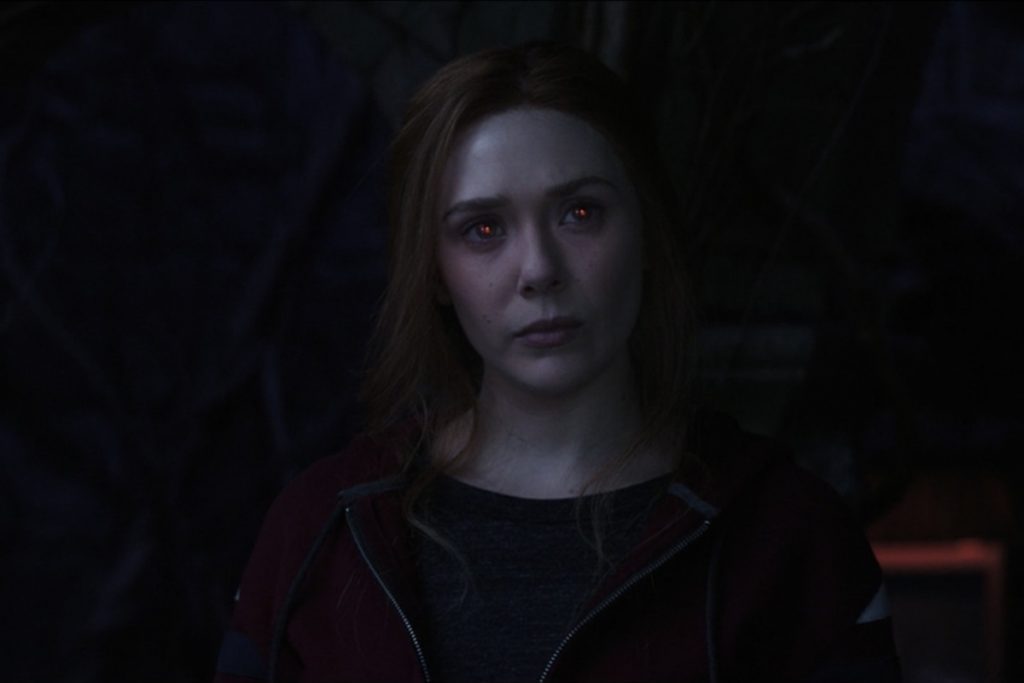 WandaVision Episode 8 Recap – It’s Been Agatha All Along… Right?

Episode 8, entitled “Previously On,” opens up in Salem, Massachusetts, in 1693. Even a minimal amount of history knowledge will tell us that this is the Salem Witch Trials era. While at first glance it may appear as if a young(er) Agatha Harkness is on trial and accused of witchcraft, her ruling is actually that she has used it for purposes that are too dark for the other witches in her coven. Fortunately for her, they are correct. She is able to use this darkness within her to drain their energy and kills even her mother, Evanora, the coven leader.

This backstory is taught to us and Wanda, who realizes just how little she knows about the real witchcraft going on in Westview. As it turns out, Agatha has been behind quite a lot, even if it hasn’t been Agatha all along. She brought Fake Pietro, a.k.a., Fietro, to the town as a way of spying on Wanda and collecting some intelligence and has continued to facilitate a lot of the town’s drama.

Though, it’s not only Wanda who is a little clueless. Agatha, as powerful as she may seem, also needs some information. She is desperate to find out the truth behind how Westview came to be, and this means that she’ll need to walk Wanda through her past life experiences to figure stuff out.

And Behind Door #3… More Trauma!

Agatha and Wanda start from the beginning, exploring the childhood of the young Maximoffs. This includes the traumatic killing of her parents, which happened while enjoying some good old fashion sitcoms. This brings Agatha to the realization that Wanda has had some powers for awhile, as she seemingly prevents a Stark Industries shell from exploding.

Following the travesty of becoming an orphan, Wanda and her brother volunteer as test subjects for Hydra. We already knew this much. What we (and Agatha) learn is that Wanda comes into contact with The Mind Stone, causing her to have a … ahem… vision of her in the Scarlet Witch comic book costume. This appears to supercharge her powers, leading her to become the woman that she is today.

It’s Time To Get Teary-Eyed In WandaVision Episode 8

Harkness and company have now learned that Wanda was a witch at birth, slowly growing her powers through various influences. But this still doesn’t answer the age-old question of how Westview came to be. As we all anticipated, we see Vision enter the equation. A memory of Wanda and Vision bonding at the Avengers compound after the real Pietro’s death is shown.

In a moment so beautiful that we recommend you go re-watch it, Vision tries to empathize with Wanda’s loss by offering the following sentiment: “But what is grief, if not love persevering?” (It’s okay, you can cry. I know I am.)

The scene between Wanda and Vision serves as an emotional catalyst for what is to come. Following the death of Vision (which we thankfully don’t have to relive), Wanda goes to retrieve his body. Rather than get to take it home as she rightfully deserves as next of kin, Hayward shows her how they are taking his corpse apart. He insists that she only wants his body to reanimate him as a weapon, and she lives in another heartbreaking goodbye. 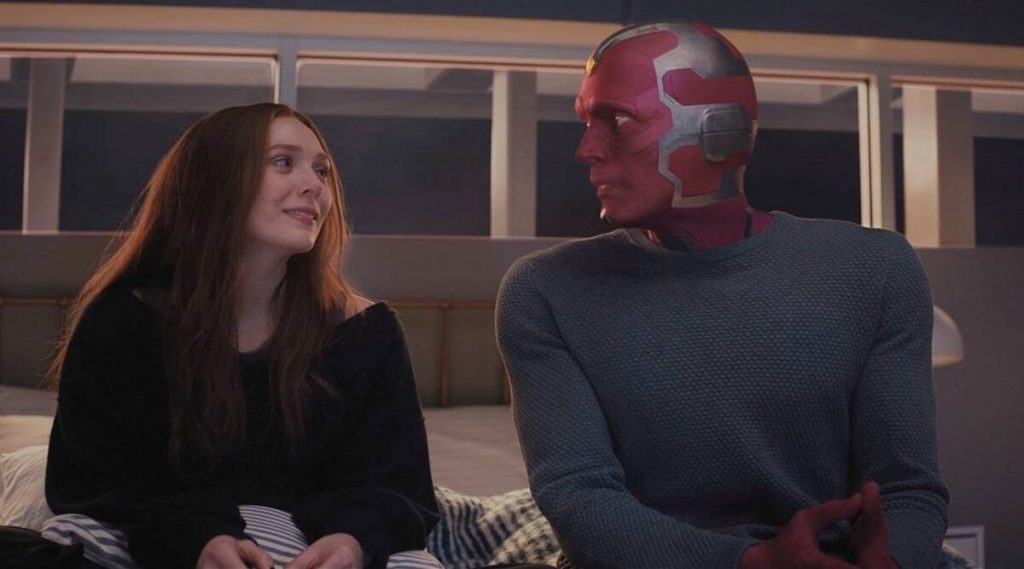 Westview Was Always For Wanda To Grow Old In

Our final “previously on” scene shows Westview before Wanda’s influence. We see some of the residents we have met before, including Debra Jo Rupp’s Sharon Davis. Finally, Wanda arrives at a nearly empty plot of land. She opens up a piece of paper to reveal the deed to the land in both her and Vision’s names. Written in a heart on the empty space are the words “To grow old in. V.”

The realization that Vision bought the land for the pair to spend the rest of their lives brings Wanda down to her knees is heartbreaking grief. While breaking down, her powers expel from her body, manifesting an entire house, a new Vision, and a hex around the town.

This explosion of power is exactly what Agatha needed to know to understand Wanda. With the twins in her control, Agatha tells Wanda the reality of the situation. She is using chaos magic and is the Scarlet Witch.

This episode taught us plenty of things. One of the most obvious is that Hayward continues to be a complete jerk, among other names. Wanda never stole his body, as he had let others believe. Hayward has had it all along and has reactivated the corpse to become a white Vision. This is seen in a mid-credits scene before we begin feeling the anticipation of a final episode.

Will It Always Be Agatha All Along?

Agatha Harkness is an incredibly powerful witch. In this storyline, she has been around for hundreds of years. This has given her time to train and learn everything from basic hexes to the most complicated spells. She can control people at the drop of a hat. She can even control Wanda. Yet, she is terrified of just how powerful Wanda can be. Is she in awe of Wanda, or is she merely trying to eliminate a future threat?

This episode ends with Agatha being a clear antagonist. She has the twins in a chokehold, which means that Wanda’s hands are tied. Yet, for Agatha, Wanda is the threat. There is no clear answer on how their future relationship against each other will play out. 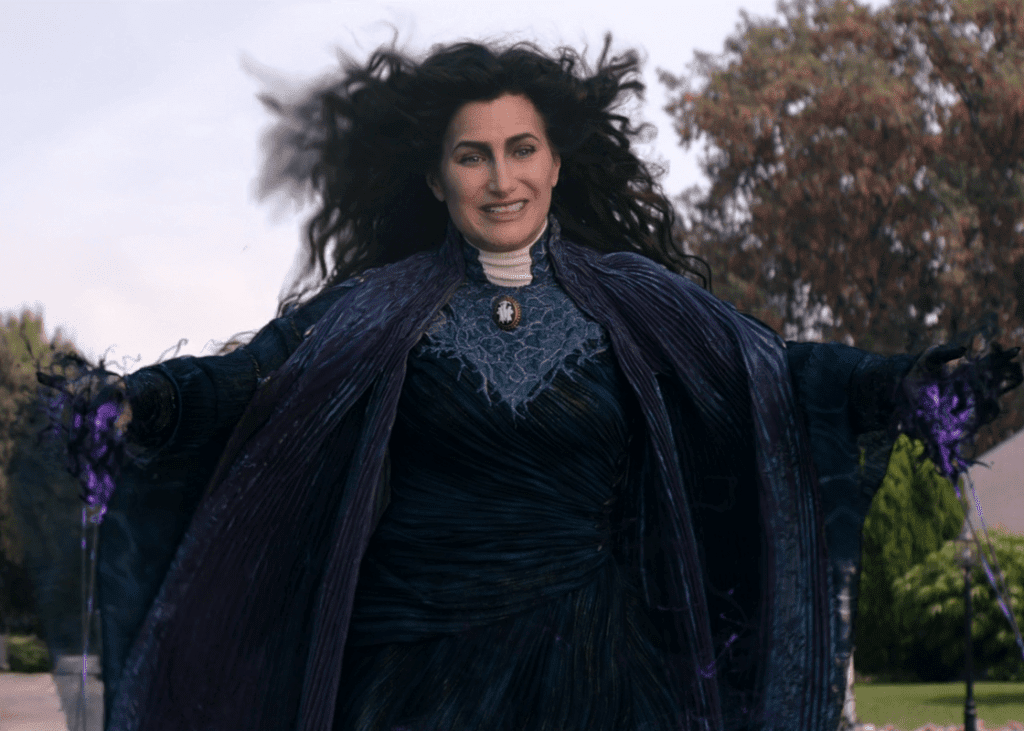 Is Wanda Chaotic, Or Is It Just Chaos Magic?

“Chaos magic,” the thing that Agatha accuses Wanda of having, is more than just a badass term. It is a type of witchcraft that involves altering reality, the strength of creation and destruction, and abilities to alter the fabric of the universe. Do you mean to tell me that Wanda Maximoff is not at the top of the list of the most powerful Avengers now? Thor who? It’s Wanda’s time to shine.

The histories of chaos magic are complicated enough that we doubt it will be completely explained in the final episode of WandaVision. This magic comes from the Elder Gods, powerful beings who existed long before even Agatha Harkness herself. One of these beings, Chthon, utilized dark arcane magic and became the God of Chaos. Chthon was eventually sealed in Mount Wundagore, close to where Wanda was born.

What The Heck Is Next Beyond Episode 8 of WandaVision?

Our episode recaps and subsequent spoiler podcast discussions often end with predictions for future episodes. Now that we’re down to one, the biggest questions remaining aren’t about who will show up or who is behind all of these shenanigans. It is how on earth they’ll have time to fit it all in. In one final episode, we need to wrap up a lot of loose ends. There is the Agatha versus Wanda confrontation. Hayward’s control over a new Vision. We might need to figure out what role Jimmy may have in the next steps. Oh, and what will happen with Darcy? And Monica? The list goes on and on. And finally, we need to find out who Ralph is. Seriously. Ralph, buddy, it’s time to come on out.

Suffice to say, episode 9 will have a lot to show us. If it’s anything like the past episodes in terms of length, we don’t know how they’ll manage to fit it in. Will it be extended and serve as a mini-movie? Or will the finale lead directly into the upcoming Doctor Strange in the Multiverse of Madness? What we do know is that we’ll have to wait some more time before all of our questions are answered.

Are We Still Loving WandaVision?

WandaVision was always going to be a divisive show. It has taken what we know about the Marvel Cinematic Universe and altered it in a way that doesn’t fit into the typical mold of a superhero movie. It’s weird, wild, and pretty depressing. Some people won’t love it, but we sure do. And this episode, in particular, shows all of its strengths.

This episode thrives because it doesn’t handle the typical “flashback” episode as most other shows would. Rather than feeling like we’re looking at the past, we approach each moment through the eyes of Wanda as she is forced to revisit it. We aren’t in her memories. We’re reliving them with her. And this is where the true manifestation of grief is explored because the curtain has been pulled back on the thing that she has spent her entire adult life trying to hide. It’s all out in the open, and she can’t run away this time.

We have said it before, and we’ll repeat it. Elizabeth Olsen was destined to play the role of Wanda Maximoff. Her handling of the darkest, most upsetting moments, such as her breakdown into creating Westview, shows delicate handling of a moment filled with roughness. She manages to balance these bits with scenes of joy, love, humor, and curiosity. We may not know what comes next in the MCU, but we do feel pretty confident that an Emmy is in Olsen’s future.

WandaVision will conclude with next week’s finale. Until then, we’ll be rewatching episode 8 of WandaVision and ordering more boxes of tissues on Amazon.

Readers, how does this episode make you feel? We want to know whether the deep dive into Wanda’s past has helped you better understand the show and how it relates to the Marvel Cinematic Universe moving forward. Let us know in the comments!