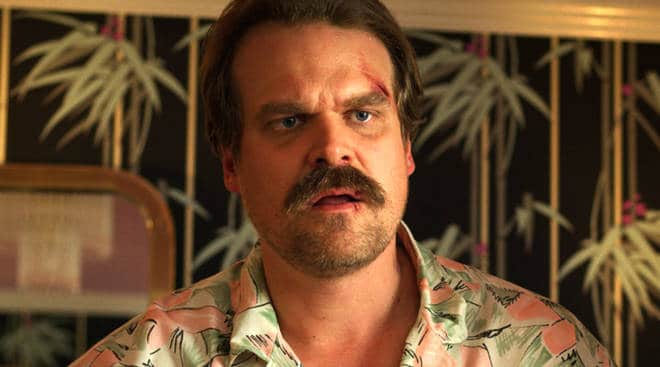 The creators of Stranger Things have gotten us used to long wait times between seasons. Even more than that, they’re also fans of releasing little plot information between seasons. So, their surprise season 4 teaser drop today was an unexpected Valentine’s Day gift! The teaser doesn’t give us any release dates for the next season, but it does give some information about a cliffhanger last season. Watch the Stranger Things 4 teaser, “From Russia With Love”, below.

Stranger Things 4 Teaser Is All About Hopper

One thing from this teaser is for sure. We’re not in Kansas – er, Hawkins, anymore. Based on the overall themes of last season (and the title of the teaser) we can assume that this is all taking place in Russia. They’re working on building a railroad, making us wonder what this all has to do with the series. That is until our beloved Hopper appears! The character was seen being “killed” in Stranger Things 3 in a sacrificial act to save everyone (and everything) else. Though, a brief scene talking about “the American” gave us a hint that the character wasn’t actually dead.

Now, Stranger Things has played with us before when it came to a character’s death. The end of the first season had El’s wellbeing put into question. Though, we had to wait until the release of the second season to learn about her fate. It’s interesting that the writers would use the same plot device, but give us more hope. Hopper quickly became a fan favorite, and watchers were heartbroken with his “death” after finally thinking that he and Joyce may fall in love. And watching El read the letter he wrote to her? Cry city. So, it seems like Stranger Things has just begun having fun messing with our emotions. If that means Hopper is alive, I guess we’re okay with it.

Viewers, how do you feel about Hopper being seen alive in this Stranger Things 4 teaser? Let us know! And we’d love to hear your season 4 predictions.