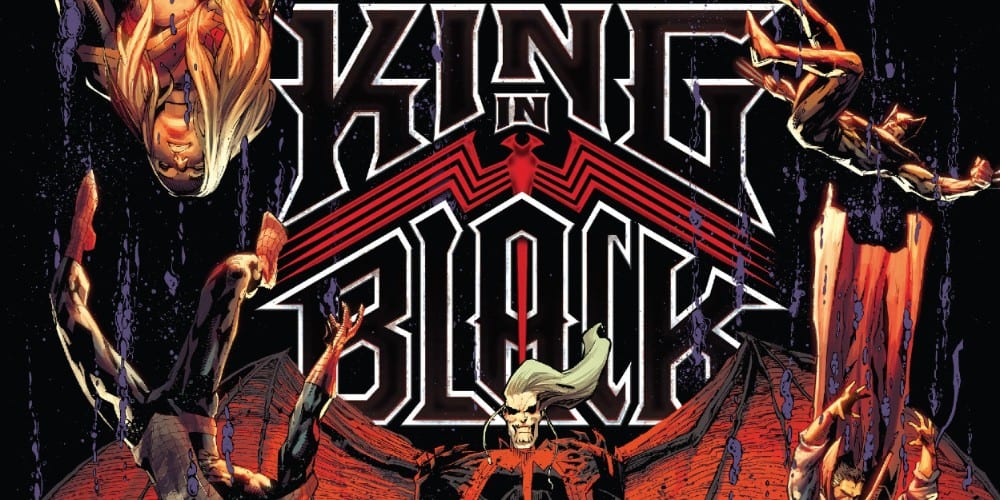 Oomph. Last week, we had King in Black: Immortal Hulk #1, an oddly beautiful, silent comic. We also had two really fun tie-ins with Black Cat #1 and Symbiote Spider-Man: King in Black #2. But for Week Four of King in Black, Marvel wants us to remember that this is a dark event, both figuratively and literally. And what we get with King in Black #2 and Spider-Woman #7 is 50ish pages of pain. So, let’s take a look. 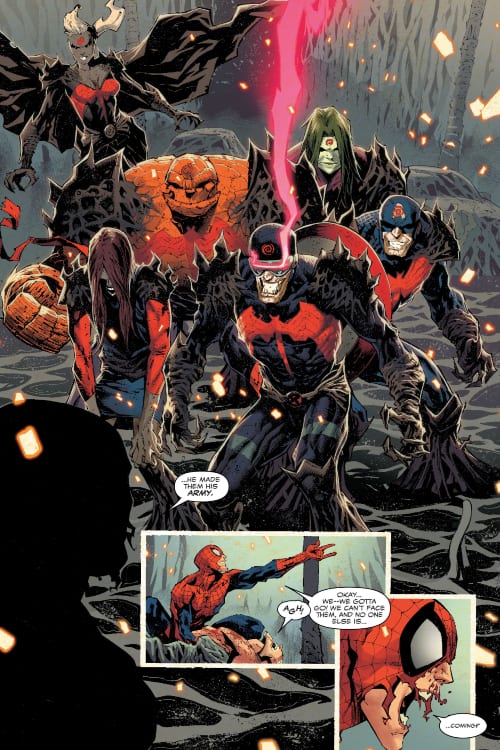 These heroes have all been Venom-ized before, but this looks a bit more terrifying. (Image: King in Black #2, Marvel Comics)

When we left Eddie Brock in King in Black #1, he was falling from the sky. In Venom #31, we watched him as he fell, and ended right before he hits a car. Well, if you thought this was a tease and Spider-Man or Captain Marvel was going to swoop in and save him, I have some bad news. We start King In Black Week Four with Eddie landing hard on that car. And two seconds later, Spider-Man arrives—distraught. He almost got there in time. Spidey generally hates Eddie, but they’ve been through a lot together, and Eddie entrusted his son, Dylan, to his former nemesis. Now he’s standing over a broken body with no idea what to do. And that’s just the first few pages of King in Black #2.

Without Saying a Word, Eddie Brock is Still The Most Important Character in King in Black Week Four 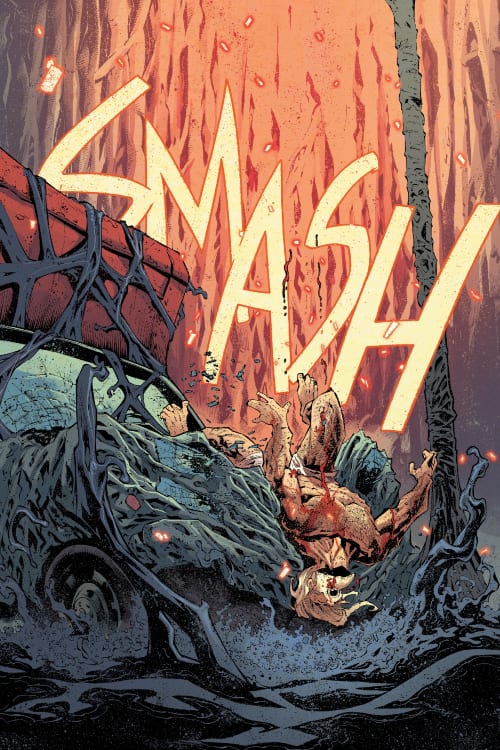 The entire second issue of King in Black #2 focuses on saving Eddie’s life. Somehow, the disgraced journalist survived a fall from the sky, landing in a car (of course, having symbiote DNA in his blood might help), T’Challa, Tony Stark, Reed Richards, and Jane Foster—along with whoever’s left of the Earth’s defenders—all struggle to keep him alive. And Jane’s death sight powers, the ability to see how close someone is to death, only shows a gigantic skull over Eddie.

Meanwhile, his son Dylan stands there, watching his father die as Spider-Man tries to comfort the kid. However, it’s with Dylan that we get our biggest twist of King in Black Week Four. When Tony tries a last-minute, hail Mary, to save Eddie—bonding him with a symbiote he acquired, Eddie’s body starts rejecting it. As he’s screaming and dying, Dylan lashes out, revealing his power. He can atomize symbiotes. Sadly, as Reed Richards discusses how fascinating Dylan’s powers are, Sue has to step in and stop him—because Eddie Brock just died, and Dylan is right there.

What is Iron Man’s Plan to Defeat Knull—and Should We Trust His Judgement? 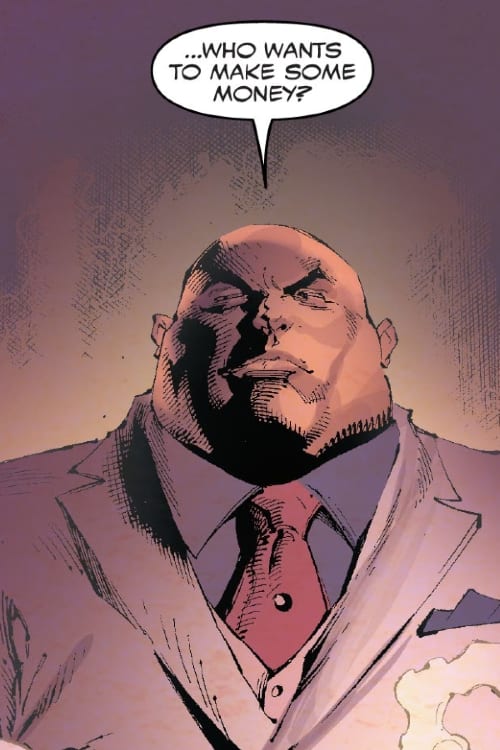 The last time Iron Man had a big plan was in Empyre. As the Kree/Skrull alliance approached Earth to destroy the Cotati, he assumed that the peaceful plant people were the victims and defended them—a bit too efficiently. Of course, it turned out that the Cotati manipulated him and were the villains all along. For once, the Kree and Skrulls were trying to save Earth, and Tony nearly lost the planet.

So, in King in Black Week Four, Tony has another grand plan to take out Knull. Obviously, Knull is definitely the bad guy, but even Tony’s plan has some major issues. Like trying to bond some random piece of dragon symbiote to Eddie Brock. He also has plans that involve Kingpin and New York supervillains. However, one part of his plan might fix a terrible tie-in from Week Two: Namor. Whoever the Black Tide is, Tony needs them. Namor says that they might cause more problems than solve. But in Tony fashion, he just says they’ll deal with that later. And since Eddie was a key part of the plan, it’s already gone to hell.

Of course, someone will come up with a new plan, but we’re going to have to wait for that.

Karla Pacheco and Pepe Perez have consistently brought a lot of turmoil to Spider-Woman, which debuted in March. However, the previous six issues have nothing on issue seven. This  Week Four King in Black tie-in simultaneously utilizes the event while continuing Pacheco’s story and standing up as its own entity.

Jessica Drew is sick. Her powers are failing, and the radiation is killing her, but her newly found brother developed a medication to help slow it down. It also makes her stronger. The catch? It turns her into a sociopathic rage machine. How bad is her rage? When a symbiote dragon tries to take over Jessica, the evil alien symbiote dragon thinks Spider-Woman is too toxic. Not a good sign. It takes pretty much every street-level hero to contain Jess—and they have to hold her in a Hulk-strength cell.

While this issue might have more emotional weight if you’ve been reading the series already, but the parallels to the opioid crisis are both well-handled and painful. Without the medication, Jess dies. But she’s abusing it, and it’s going to kill her all the same if she doesn’t find a cure.

King in Black Week Four was a good week. And it’s the second good week in a row. So, let’s keep this up, Marvel!

COMICSMarvel
Heroes Reborn Week Seven: Forget The Squadron Supreme – President Phil Coulson Is The Most Evil Villain In This Reality

Technically, week seven marks the end of Heroes Reborn, as the final week’s issue is Heroes Return. However, though the main series’ numbers are up, we’re nowhere near the end. In fact, it feels like […]

After airing the season 1 finale just weeks ago, Harley Quinn is already back on DC Universe with its season 2 premiere. In the aftermath of the, literally, earth-shaking events of the last episode, Gotham […]

BY Joshua M. Patton April 3, 2020
Marvel
A Spider-Man Villain’s Powers were Stolen By One of Marvel’s Strongest Avengers