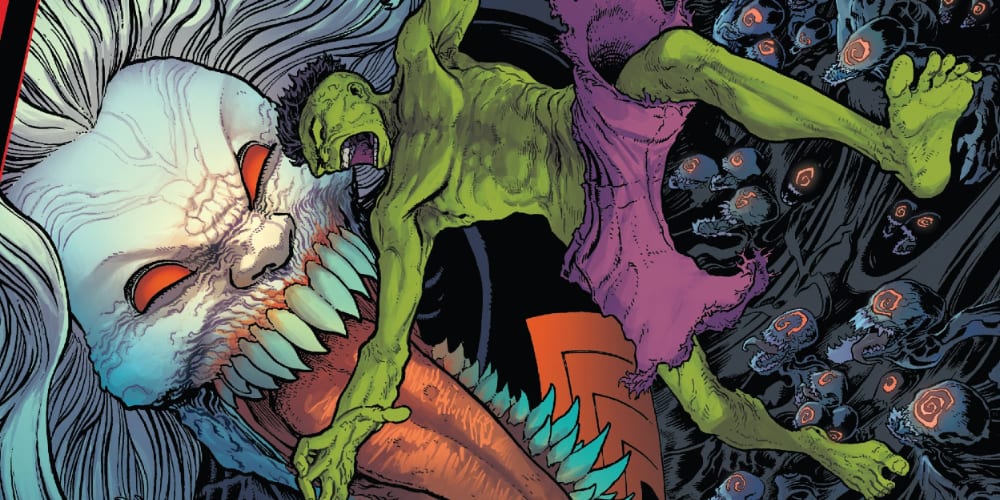 So far, there have been 4 tie-in issues for King in Black, the big Venom event taking up almost every corner of the Marvel Universe. Of those four, only one—Venom #31—was actually good. But Donny Cates, the author of King in Black, wrote that issue. So, we should expect the mastermind of the event to write a great tie-in. Now we’re on King in Black Week Three, and we have three more tie-in issues. And against the odds of Knull himself, all three are good. Like, really damn good, too.

This week was fun. And emotional. And suspenseful. That’s because we had three very unique stories from a great group of creative people. We had one series debut, the second issue of a mini-series that actually started before Week One of King in Black, instead of starting in Week Three, which would make more sense…I’m rambling. And we had a one-shot that is one of the best comics I’ve read this year. So let’s do this. 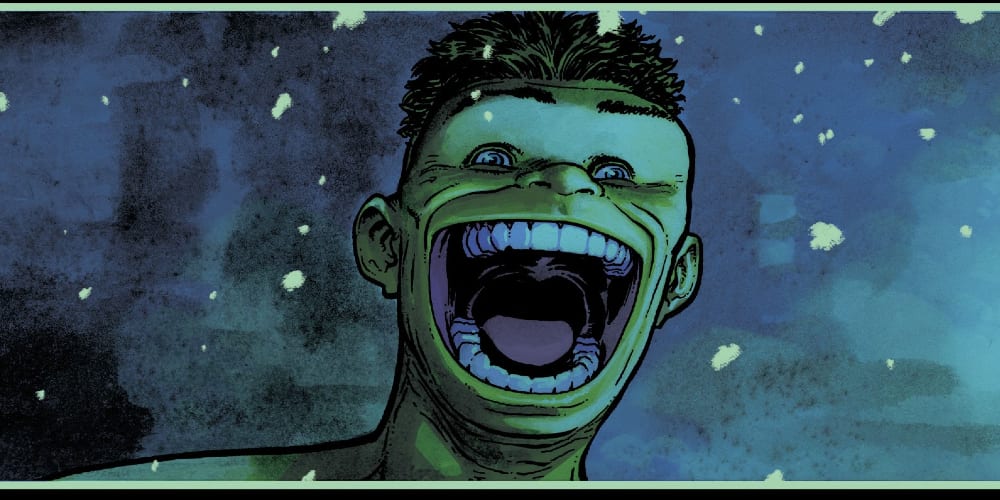 Honestly one of my favorite panels of this entire event. (Image: King in Black: Immortal Hulk #1, Marvel Comics)

This comic portrays everything that makes comics so amazing. And as if it couldn’t be more perfect—it’s a Christmas Special. A frackin’ Christmas Special! How did we end up with this beautiful Christmas special in Week Three of King in Black? Al Ewing (writer), Aaron Kuder (artist), Frank Martin (colorist), and Erick Arciniega (colorist). If you haven’t been reading Hulk, it doesn’t matter. The recap page explains enough. Basically, Hulk is in some bad shape, and there’s a scrawny child-like Hulk in his place. So, despite that it’s the night before Christmas and Knull has completely taken over New York City, we follow “Savage” Hulk as he wanders around, lost and aimless, and distracted by toys in a window.

But the sweet story of this child-Hulk is only part of the magic. The issue is one hundred percent art. No captions, no word bubbles. We get this kind of comic every so often. Recently, we saw it in Giant-Size X-Men: Jean Grey and Emma Frost. However, it worked better here. In fact, I don’t think this technique has ever been used this well. But what makes it work is the child-like Hulk we have now. Kuder really shows his innocence, his confusion, his loneliness, and his sense of wonder. Comics are sometimes described as “words for pictures.” But a comic like this shows that—occasionally—you don’t even need words. 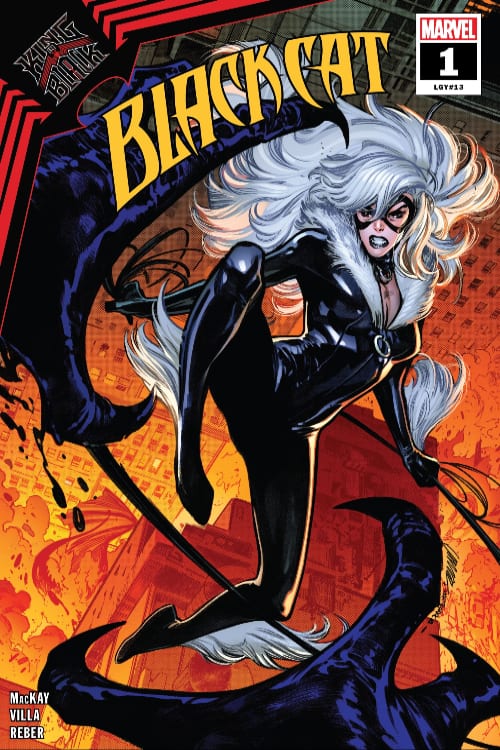 How hasn’t DC sewed Marvel over this character yet? Or have they? TO THE GOOGLES! (Image: Blac Cat (2020) #1, Marvel Comics)

So, any comic that starts with somebody driving a stolen Spider-Mobile is already off to a great start. And that’s where we start—Black Cat and her crew are about to pull a heist to get some SHIELD black money…when a symbiote dragon falls from the sky and ruins their plans. Sometimes, a tie-in feels like an event just crashed into the comic. That’s literally what happens in Black Cat #1. It’s just a shame that we had to wait until King in Black Week Three for this issue. It really should have been in Week Two.

Felicia Hardy is never sure if she wants to be a thief or a superhero. But—spoilers—here, she gets to be both. As the heroes are overwhelmed, Black Cat’s able to escape the symbiotes, and Captain America gives her a job. She needs to steal from Knull. What’s the mark? Well, that’s the best part—but you’ll have to read it to find out. Let’s just say it’s magical. 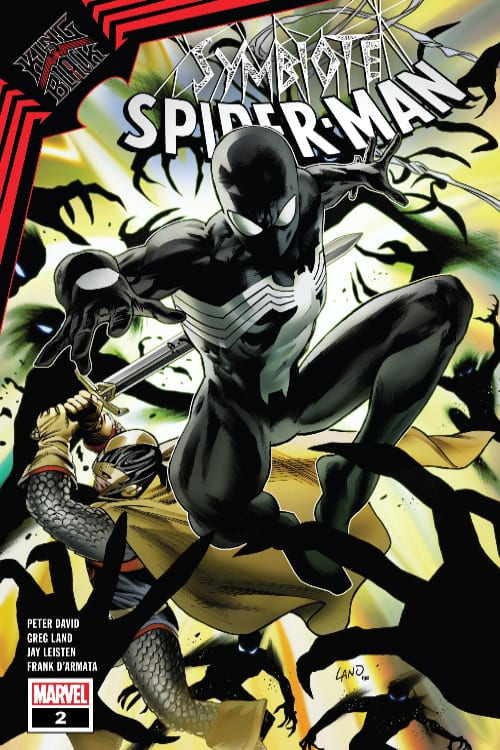 This doesn’t even take place during King in Black, and it’s still a better Tie-In than nearly all the ones in Week One and Two. (Image: Symbiote Spider-Man: King in Black #2, Marvel Comics)

Yeah, it’s weird that this miniseries’ first issue was the week before King in Black started, but let’s just jump into this Week Three tie-in. Peter David’s Symbiote Spider-Man stories explore untold events while Peter Parker wore the alien costume. So yes, this takes place years before King in Black—but it still ties in better than Atlantis Attacks #5, The Union #1, or King in Black: Namor #1. Perhaps this is because it features a team-up between Kang the Conqueror and Rocket Raccoon. Yeah. Peter David actually makes this work wonderfully. They’re trying to find the Black Knight’s ebony sword, which might be the key to defeating Knull. Meanwhile, Spider-Man fights some weird shadow symbiotes who keep calling him brother. It’s always fun when Peter has only a fraction of the information he needs.

The only thing that didn’t work is Greg Land’s art. Actually, it worked for most of the issue until he had to draw a female character. For some reason, Land just can’t draw a woman’s face without her looking somewhat pornographic. And all his women look the same. It’s really annoying. With another artist, a Chris Bachalo or Humberto Ramos, the series would be a really fun flashback tie-in to King in Black.

Next week, we’re getting issue two of King in Black, and just one tie-in: Spider-Woman #7. Till then, happy symbiosis.

The Russo Brothers have had quite the career. From directing various episodes of Community to launching into the MCU in full-force with Captain America: The Winter Soldier, this duo has proven themselves time and time […]

There are not many disabled superheroes, but Marvel has some of the most famous. For instance, Daredevil, a blind superhero, and Professor X, who debuted as a paralyzed man in a wheelchair with extraordinary powers. […]

There is no television producer as prolific as Warner Bros.’ Greg Berlanti. He has a record 15 series on-the-air right now. From the Arrowverse to series like Blindspot and the regrettably named God Friended Me, […]