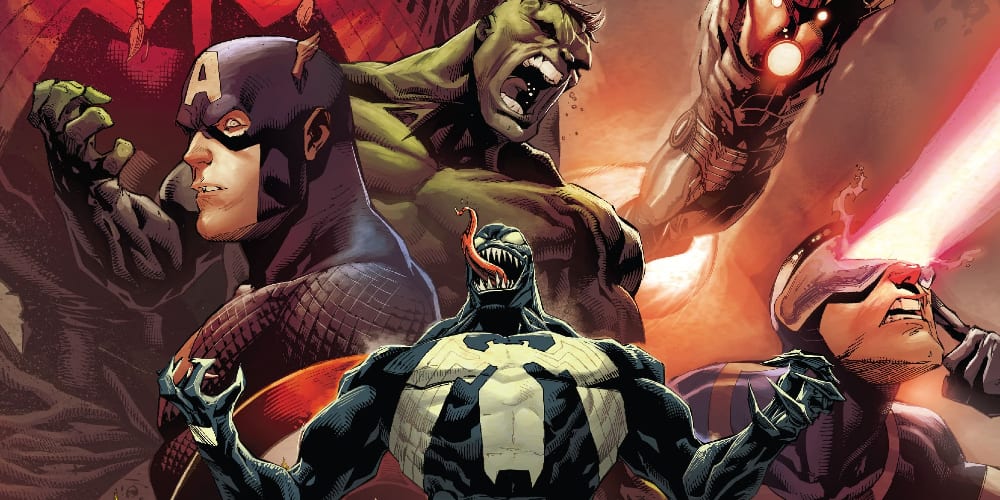 Marvel wrapped up X of Swords and dove headfirst into its next event, the Venom-centric King in Black. Drawing from years of Donny Cates’s Marvel work, the symbiote god Knull has come to Earth, which stands between him, his legions of symbiote dragons, and the rest of the universe. For the past few years, Cates has been reinventing Venom and his mythology into something so much bigger than alien goop. And in the first issue of the series, we see just how massive his Venom epic really is. Unfortunately, the same can’t be said of the King in Black week one tie-ins.

King in Black Week One: The Main Event 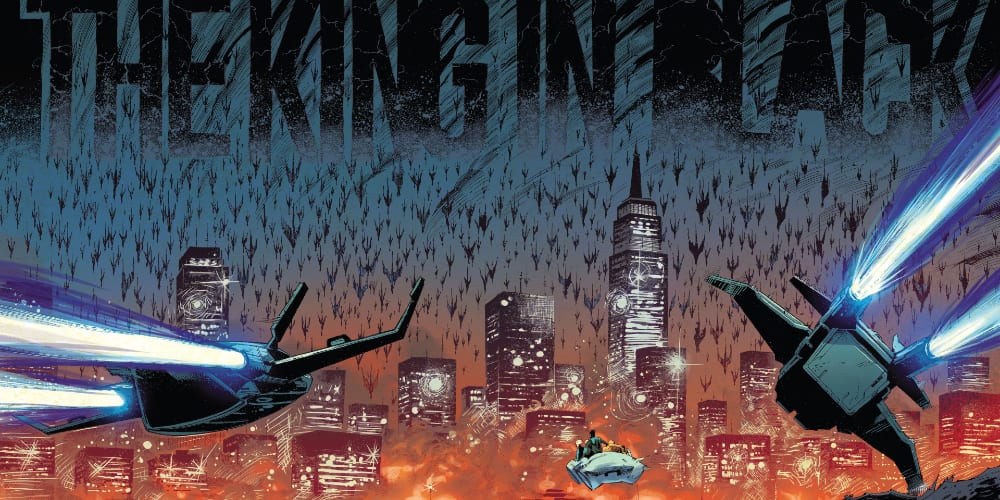 Here, there be ALL the dragons. (Image: King in Black #1, Marvel Comics)

Let’s start with the big debut itself. King in Black #1 is, of course, the highlight of week one of the event. It wouldn’t bode well if this first issue didn’t live up to several years of buildup. If you haven’t been reading Venom, the Eddie Brock you see in KiB is almost unrecognizable. He’s no longer a raging meathead or some 1990s body-building bully. Both Brock and his symbiote have gone through massive changes. The symbiote, after serving with Flash Thompson and becoming a hero, wants to stay a hero. Brock, however, has had a miserable life. He had cancer, he was, and kind of still is homeless. He found out he had a son that his abusive father was raising—and abusing as well. It hasn’t been a great decade for Eddie, even if he got his best friend back.

But regardless of how much he struggles, Brock is still determined to be the hero. With Knull coming for Earth, he isn’t trying to take him on alone, nor is he simply assisting the Avengers and X-Men. Instead, Venom is leading. And both Captain America and Professor X respect that when it comes to Knull, Venom is best equipped to deal with the threat. Eddie Brock as a leader? Doesn’t fit. However, when he’s pushed into a corner, he takes the responsibility as best he can. 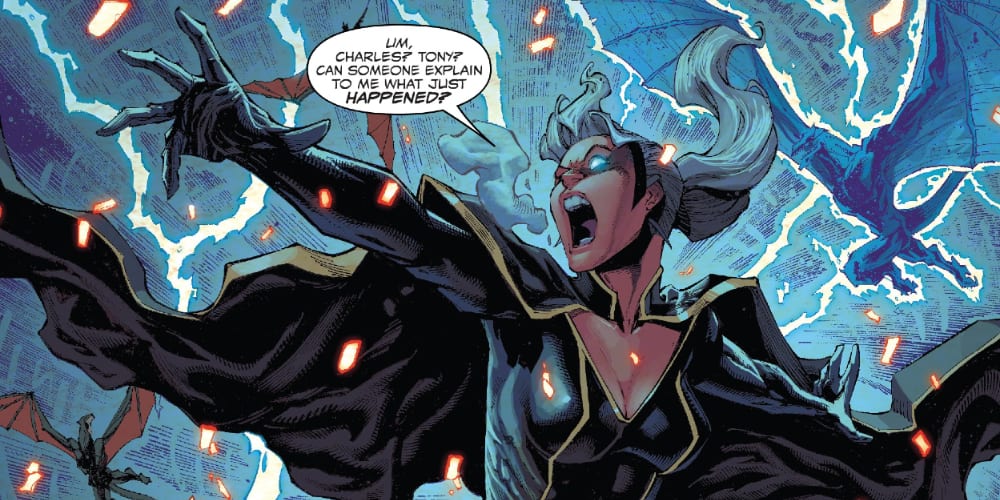 You read that right, above. Both the Avengers and the X-Men play major roles in King in Black #1, though not in the week one tie-ins. Captain America, Iron Man, Professor X, Cyclops, Wolverine, and Storm all have important roles—especially Storm, as she brings the lighting and thunder since Thor is MIA. Empyre was a Fantastic Four and Avengers event, though the X-Men had a part to play in tie-ins. X of Swords was strictly an X-Men event. As a result, King in Black, though centered on one of the not-so-important Marvel characters, is the year’s biggest event. But we’re just at week one of King in Black. And we’ve already had some major developments across all corners of the Marvel Universe.

The Short and Painful Return of the Avengers’ Heaviest Hitter (SPOILER) 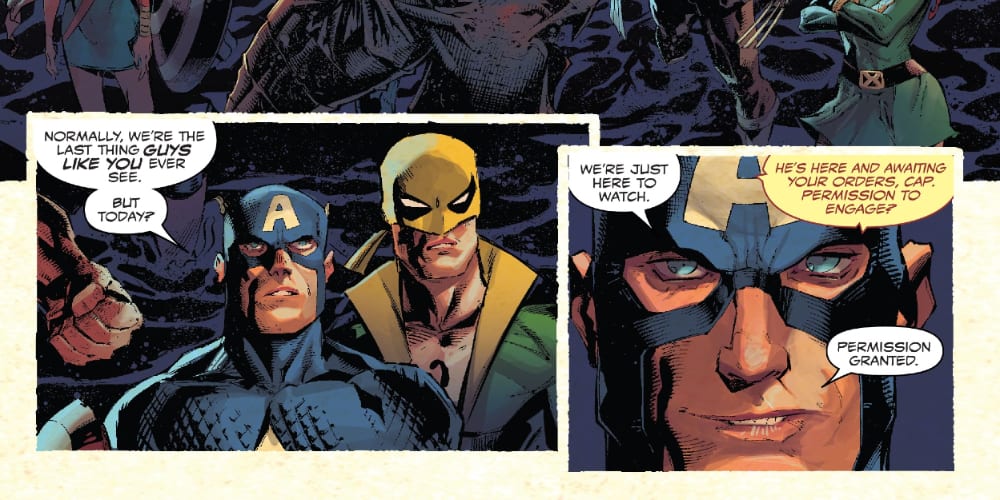 Oh, Cap. Smug does not look good on you. (Image: King in Black #1, Marvel Comics)

When Knull starts taking over the Earth, Captain America and Iron Man are trying to set up contingency plans. They keep mentioning a “big gun” besides Thor. And who can this big gun be? The Sentry! We haven’t seen much of the Sentry in recent years, but he returned not too long ago. The Sentry is an all-powerful, Superman-like character. However, Sentry doesn’t have the best grasp on reality and is constantly holding back something he calls “the Void.” According to Knull, he is the void since he is the god of darkness.

Now, there is a tradition when it comes to the Sentry. He disposes of many of his enemies in a pretty barbaric way. Fifteen years ago, in New Avengers #2, he did this to Carnage: 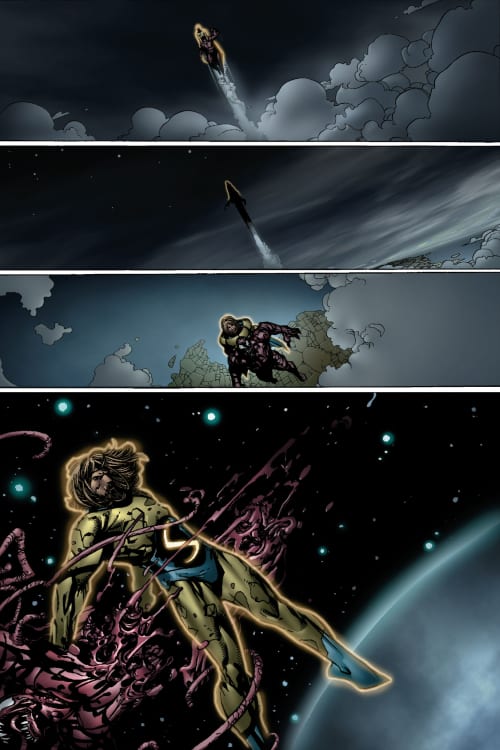 Yep—flew into space and ripped him in half. Quite effective. But if you think that’s gruesome, it’s nothing like what he did in Siege (2010) #2: 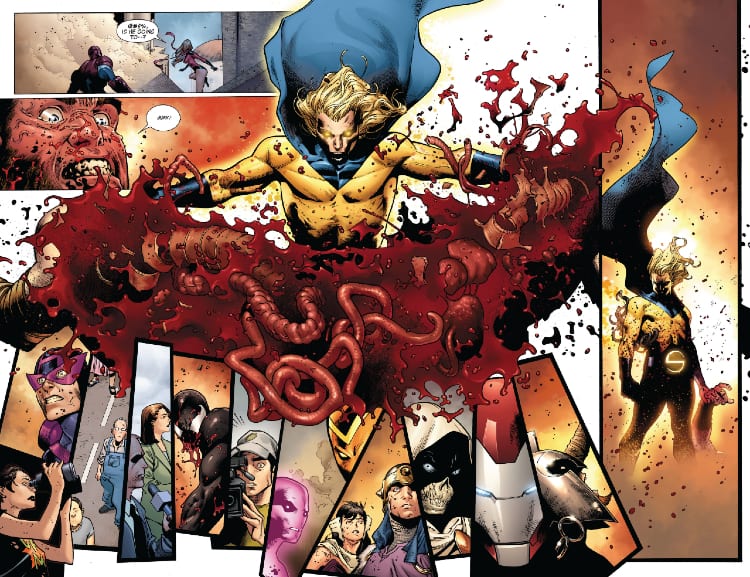 Now, on the 10th anniversary of ripping Ares in two, Donny Cates returns to this moment, with Ryan Stegman beautifully mirroring the scene from Siege #2—but in a completely different and more horrific way: 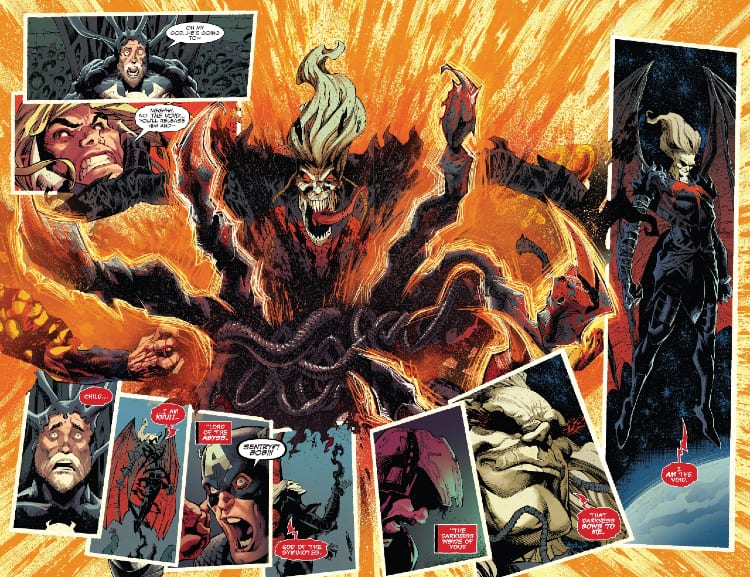 He kind of had it coming. Just saying. (Image: King in Black #1, Marvel Comics)

Yep. Sentry returns just long enough for Knull to tear him in half the way he did to Carnage. It’s a stunning moment and one that shows just how powerful Knull is. And this isn’t even the end of the issue.

Final Thoughts on King in Black #1

Knull goes after Storm, cutting her off from the sky in a fist of darkness, and finally after Venom—who gives himself up to buy the Avengers and X-Men some time. But after Knull rips the symbiote right off of Eddie, he says that he wasn’t after Eddie Brock. He was after Dylan Brock, Eddie’s son. And then he flies up to the “oh crap” altitudes and drops Eddie—now powerless—to the Earth below.

King in Black #1 was as big as X of Swords: Creation and Empyre #1, but in just the first week, we already have one dead character. It’s going to be a dark winter indeed.

Okay, so these were not great, but they were part of King in Black Week One, so… 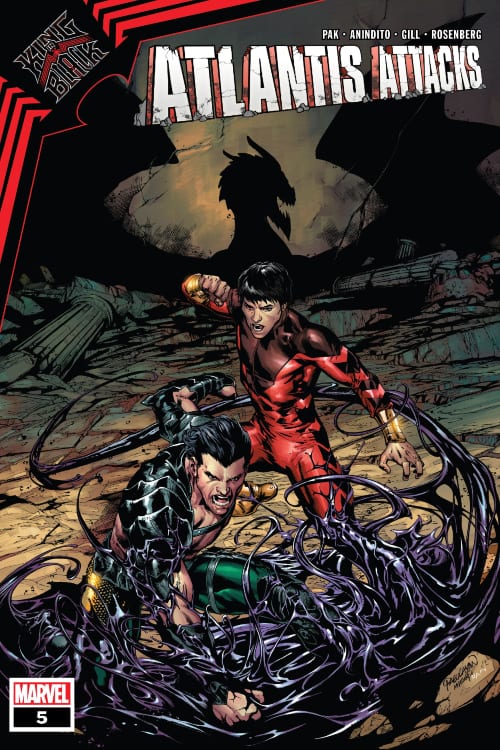 This should not be here. At all. (Image: Atlantis Attacks #5, Marvel Comics)

This had nothing to do with King in Black. Literally, nothing. Jimmy Woo says something is coming at the end, hinting at King in Black but aside from that, there is no reason why this should be in week one of the event, let alone carry the banner on the title. There’s not a symbiote in sight. 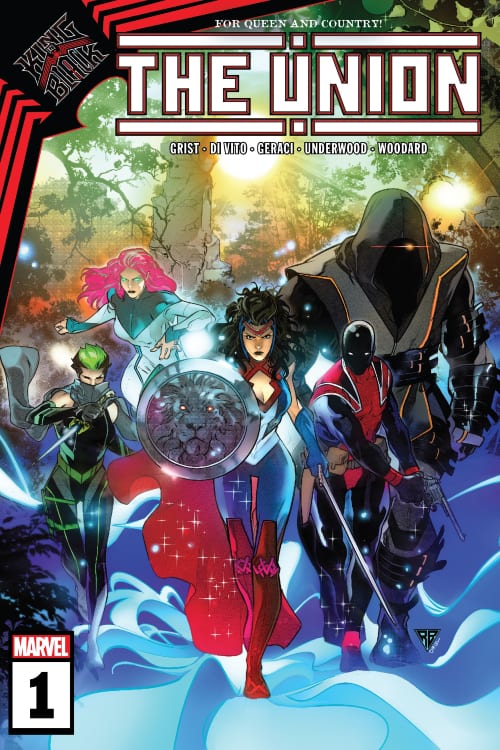 So, Atlantis Attacks has symbiot on the cover, but The Union kept their Empyre cover? What? (Image: The Union #1, Marvel Comics)

Well, at least this tie-in actually has symbiotes in it. But the issue itself was very sloppy, for a reason—it wasn’t supposed to be a King in Black tie-in at all. Originally, The Union was an Empyre tie-in. In fact, they’re using the same cover, hinting at the Cotati crisis. There’s an obvious point in the first issue where they had to rewrite the parts that Empyre originally took up. It isn’t done well (though the art is cool). What makes The Union’s inclusion in King in Black Week One even stranger is that not many people even wanted The Union, especially people in the United Kingdom. But controversy and tie-in aside, the worst thing about The Union #1 is that it introduces four new superheroes and gives us no reason to like them or even want to learn more about them.

Hopefully, the tie-ins get better, but at least the debut issue of King in Black was amazing.