Comics For Ukraine: An Anthology Book Against War | Comic Years

Comics For Ukraine: An Anthology Book Against War 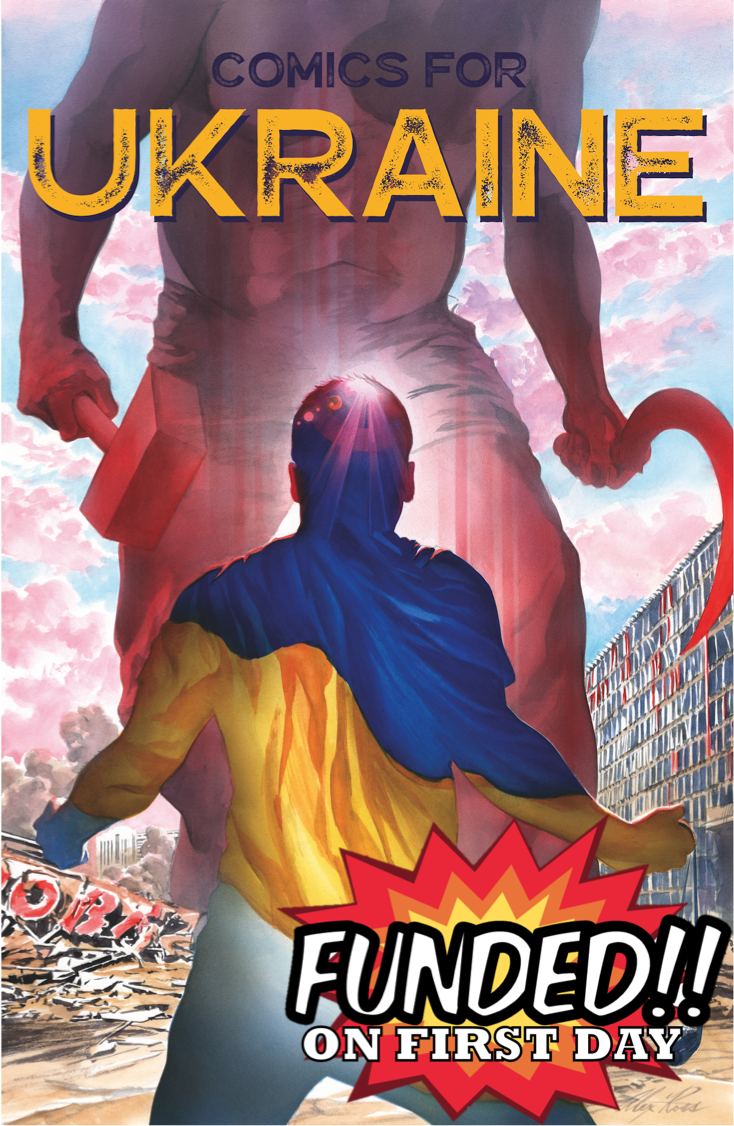 Comics publisher Scott Dunbier has come up with a beautiful initiative. Faced with the horror experienced as a result of the war, the publisher has created the Comics For Ukraine movement. After observing the horror being experienced due to Russia’s assault on Ukraine, Dunbier decided to take action. The respected IDW Publishing editor contacted some of the best comic book creators to create an anthology book and earmark the proceeds for humanitarian relief.

Thus was born Comics For Ukraine: Sunflower Seeds, a 96-page tome packed with artistic stories available to people who want to participate in the crowdfunding that went live yesterday, April 19th.

The Main Goal of Comics For Ukraine 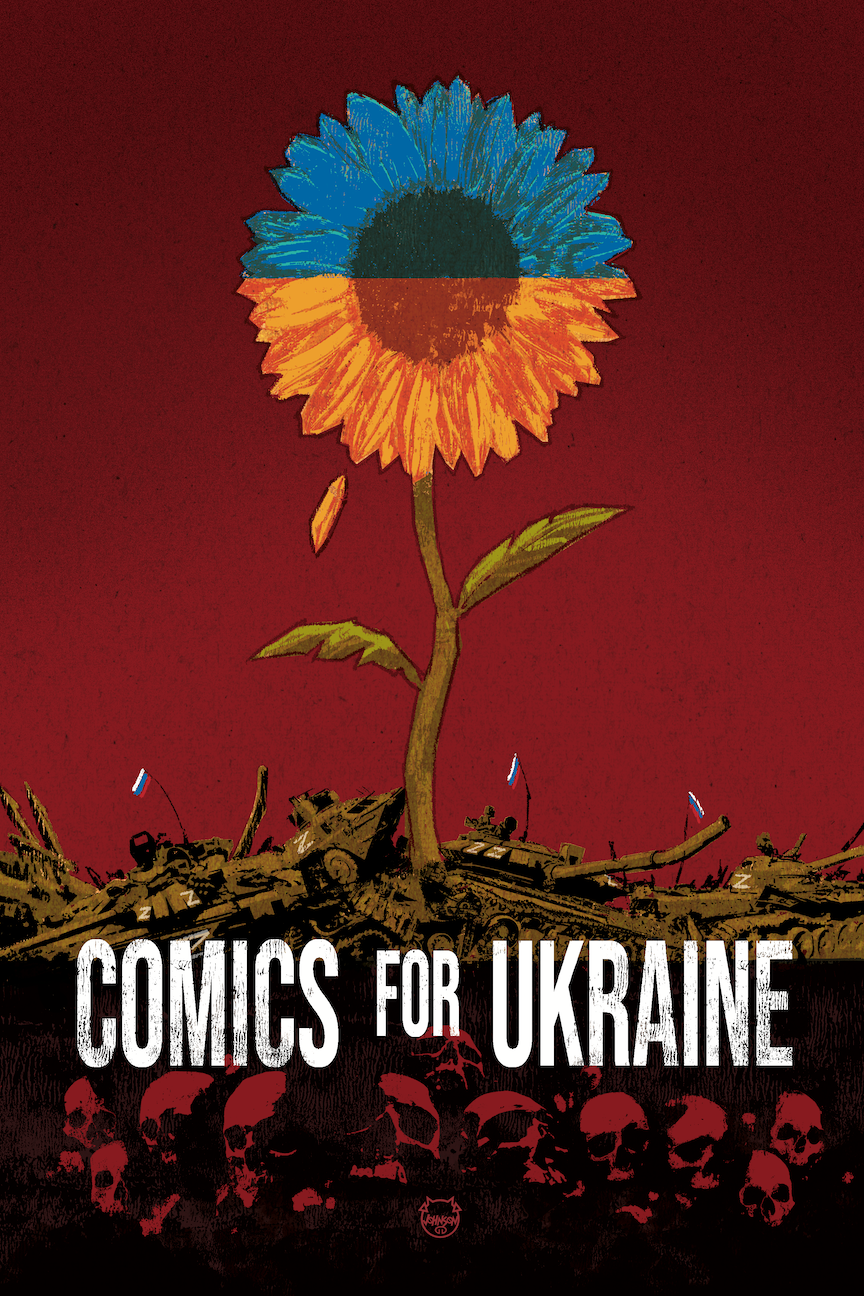 As stated by Dunbier, “The comics community is full of good and caring people who have stepped forward to say ‘I stand with Ukraine’ and contribute to this book.” Comics for Ukraine: Sunflower Seeds features “an incredible roster of comics talent united under the mission of providing aid to war-torn Ukraine, which has been under attack from neighboring Russia since late February.”

The publisher has explained that the comic book’s title for Ukraine came inspired by a rather poignant event. During the early days of the war, a Ukrainian woman offered sunflower seeds to a Russian soldier to put in his pocket so that when he died, at least something good would grow from it. This touching message resonated with Dunbier and the fact that the sunflower is the national flower of Ukraine and was instrumental in setting the title of the work. This noble motif began to attract many well-known contributors to the industry.

Photo by Elena Mozhvilo on Unsplash

Proceeds from Comics for Ukraine, net of production and marketing costs, will go to OpUSA’s refugee relief efforts. “OpUSA is grateful for the support of Mr. Dunbier and all the artists and writers involved in this project,” said the organization. And they added, “Operation USA is entirely privately funded, so projects such as Comics for Ukraine: Sunflower Seeds play a vital role in building our capacity to provide critical relief where needed most. Proceeds from this project will directly impact the lives of those deeply affected by the ongoing war—improving conditions for Ukrainian refugees in Poland and other nearby countries via the provision of emergency grants and in-kind material aid. We thank all those involved in this meaningful project.”

The Authors who Participated in the Book

The work will have several versions, including a hardcover version created by Alex Ross, a legendary cartoonist who left gems at Marvel and DC, most notably Kingdom Come (1996). There will also be a softcover version by Arthur Adams, another important author who won the Eisner Award for Best Single Issue. The work will feature contributions from today’s leading writers and artists, including Joshua Dysart, Emil Ferris, Rob Guillory, Gabriel Rodriguez, Jill Thompson, Louise Simonson, and Chris Sprouse. A complete list of contributors, including designers, letterers, and colorists, can be found on the platform website.

In addition, many of the creators are contributing unpublished stories of their best-known characters, such as an American Flagg story by Chayki, a Groo the Wanderer adventure by Aragonés and Evanier, or a new Astro City story by Busiek and Anderson, among many others.

Here is some of the content to be found in Comics For Ukraine:

It is certainly a very nice initiative that will help alleviate the effects of this devastating situation. If you want to be part of Comics for Ukraine, you can reserve your pre-order on the platform’s website and do your bit.

What about you? Which of these authors would you be most excited to see in this book? We’ll read you in the comments.

Featured Image Via: Comics For Ukraine

Like many great creators, Stan Lee still has new work coming out – not even death could slow down Stan the Man. Just yesterday at 3:17 PM, Rocketbook launched the Kickstarter for Stan Lee’s Backchannel […]

Harpies Origins: Aradia is the newest Kickstarter venture from Evoluzione Publishing, a rising indie comics imprint. Written by Elisa Bisignano, and with art from Matteo Illuminati and Loris Ravina (the same art team from Mine […]

It’s Halloween! Forget calling it October; we all know it’s the month of Halloween. All Hollow’s Eve. Age of the Pumpkin Spiced Latté.  Regardless of what you call October, we have a great selection of […]