What The Alex Ross Art Style Has Given Comics And Us 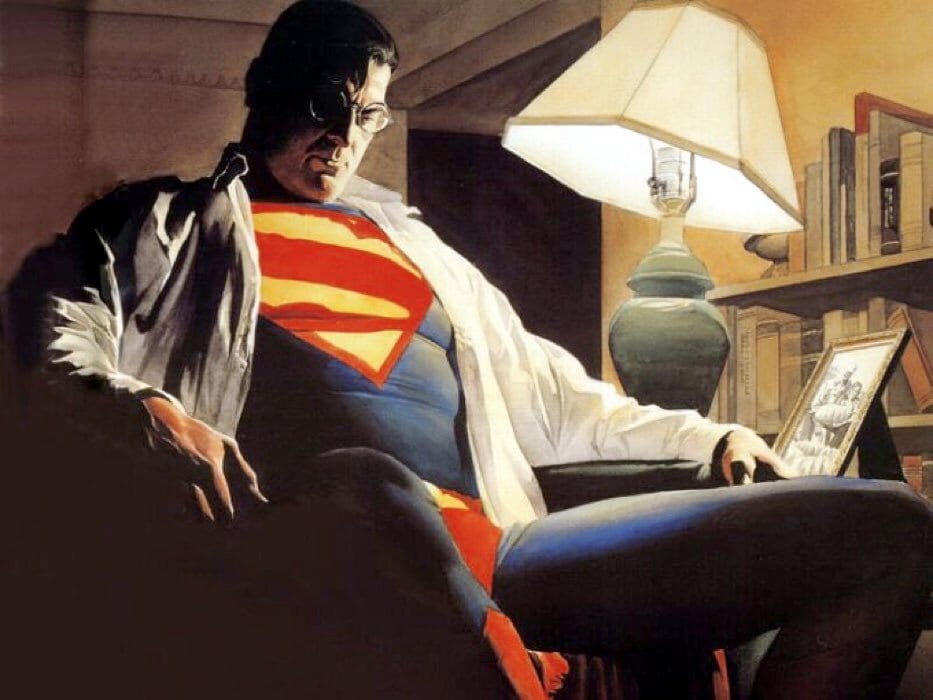 If you’ve spent more than a little time loving comics, odds are good you’ve not only encountered work by Alex Ross, but you also really considered pinning it to your wall. Ross has been working on comics since 1994, and his covers and art are among the most recognizable and awe inspiring. What defines the Alex Ross art style is posing and action akin to David Perez and the craft and depth of Giorgio Vasari, a Renaissance painter that didn’t get to have a turtle named after him.

What has made Alex Ross unique throughout his long career in comics is a stunning realistic style, hand-painted and capturing the movement, emotion, and gravity of a scene like very few others can. It’s the difference between seeing Spider-Man struggling against all his greatest enemies and feeling it. Ross gives us the gift of stress and tension which makes reading a victory so much more gratifying. Though his paintings appear in Marvel and DC comics, but they aren’t limited to that alone.

The Alex Ross Style Without Heroes

In 1990, Alex Ross got his start working on an issue of the Terminator comics: Terminator: The Burning Earth. Since then, he has painted work for characters and stories that might seem surprising but are no less absolutely enhanced by his work with them.

Alex Ross is known for painting using Gouache and Wash paints, which are both slightly similar to watercolor, only Gouache is more opaque and Wash is less. The effect of both is layers of color that have no clear brushstrokes. What we’re left with is an image both stylized and wildly realistic. Take that in contrast to how we usually see these characters, either on a big screen or a small page, but either way there’s distance that is suddenly removed when you’ve got them seemingly-alive in front of you. 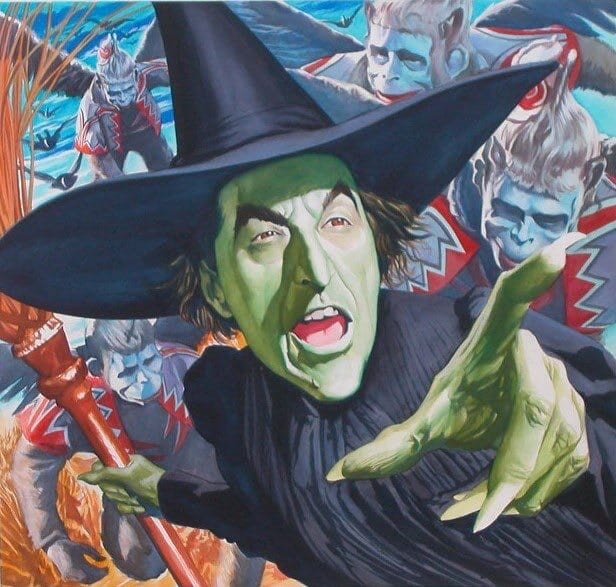 Ross makes incredible use of color and shadow, and beyond that there’s movement or tension. Like in this painting of the Wicked Witch of the West and her cohort of flying apes (or simian avians, which we can abbreviate to simians or… avians). We get the chaos of movement behind her along with the deep, shadowed menacing expressions from her simian gang. And every part of this image and so many other Ross works feel like they’re just paused. Like we’re unnaturally seeing a definite motion frozen, but it’s lifelike enough to feel that the motion is going to continue. Look at the Witch. She’s absolutely about to say something awful to you, and any small dogs in your immediate vicinity.

If we were to categorize the Alex Ross art style, we could say his work tends to have two modes to it: incredible realism and emotional abstraction. With this realism, we get something the live-action interpretations just can’t give, and to illustrate this, we gotta think about kitties. You will likely never see a lion in the wild. They aren’t the most sociable of kitty cats, and there are fewer of them than there should be. Seeing a lion in the wild vs seeing one in a synthetic scenario like a zoo or along a pre-planned path through a preserve is going to be a different experience. Spider-Man, as much as we love him, isn’t real. Movies can do what they can to make him real, but we aren’t seeing him in his natural habitat in the comics where we usually picture him. Ross gives us the realism to believe we can see our heroes reborn in front of us without breaking the medium and just having a photo-realistic picture of the guy. That’s good stuff. 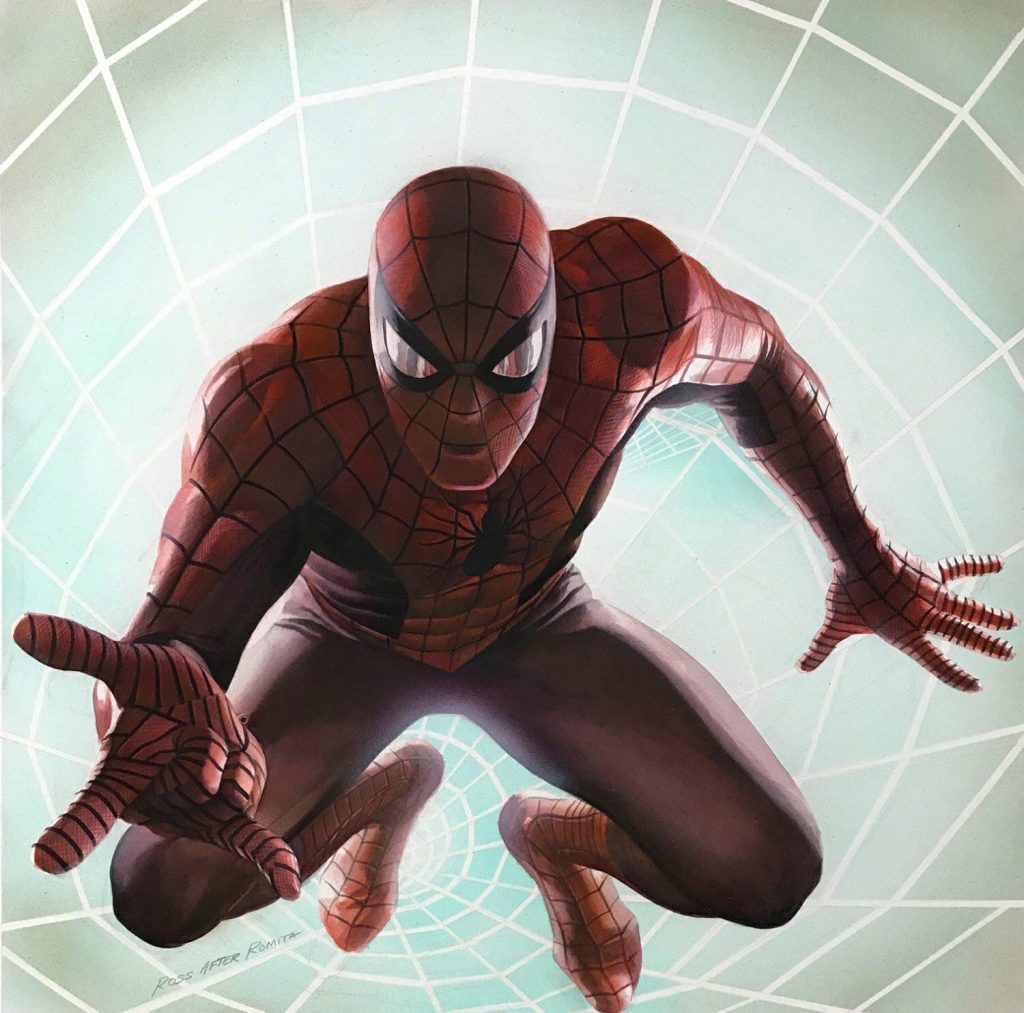 Then we have images that use more abstract imagery to convey some of the more powerful and complex emotions we harbor for the characters we’ve loved for so long. Using the kind of imagery and symbolism we interpret without really thinking about it, Ross gives us the meaning of the characters we love while also making them look absolutely rad. 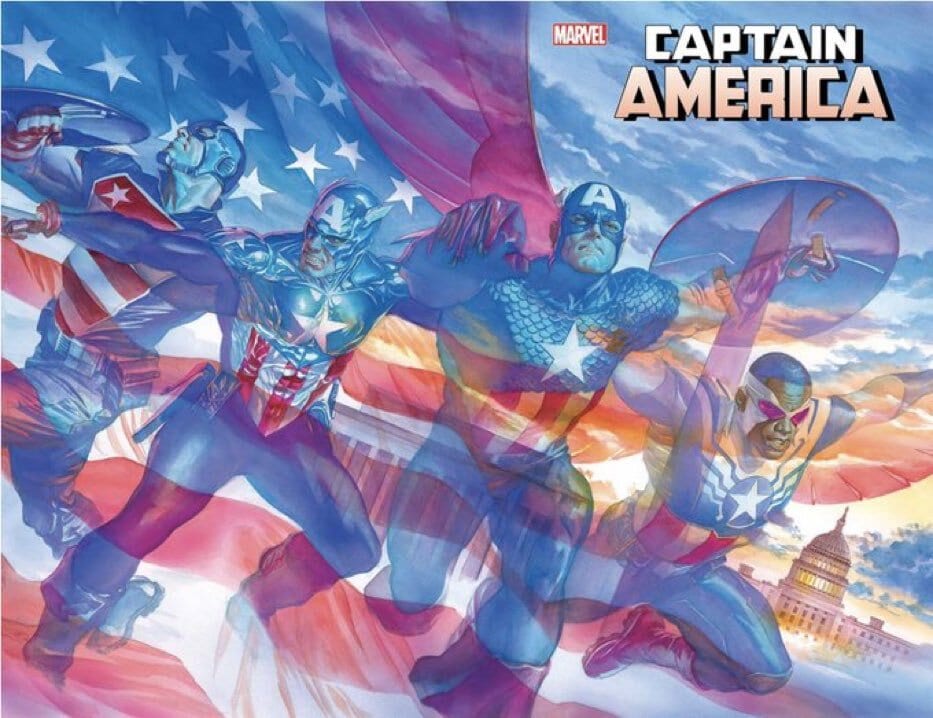 This image of the US Agent and Bucky Barnes, Steve Rogers, and Sam Wilson gives us so much in one image with an overlay of an American Flag and a few of the country’s most iconic buildings in the background. At once, this is the history of the Captain America mantle, showing 4 of the most prominent people who have carried the shield. Coupled with that, there’s that good, good metonymy of Steve, Sam, and Bucky standing in front of the Capitol and the Lincoln and Washington memorials defending the things that represent the kind of marble-perfect ideal America they’re trying to achieve. And then over to their right John is doing something similar, but he’s only in front of the flag, which could be telling of the fact that he overall failed as Captain America because he saw the country but not the things people themselves made. Or it was just a spacing thing to leave room for Steve’s kickass wings that extend the red stripes of the flag like he’s carrying the best hopes of the country.

It’s one thing to see Superman in a comic and know his story and the power he represents in that world, but with Ross you can absolutely feel it. In one interview, he remarked that his characters tend to look a little older because he aims to represent the years of weight they’ve carried on their shoulders, and there’s something about seeing a superhero without the distractions of an idealized body to make you think a little more about the character themselves. Superman, if you look only at the power, is functionally a god. Add in the worship he receives, and it stops just being functional. What Ross gives us is that power and that gravity contained in a body that’s inarguably just a guy, and that guy is tired. Ross’s art of Superman is some of his most beloved, and he’s gone on record saying he was sad when DC moved away from his older depiction into a younger reboot. The reason Ross’s Superman is adored is because it’s just him. It’s the character captured perfectly. You get godlike power humanized with a controlled expression and a sick ass cape. 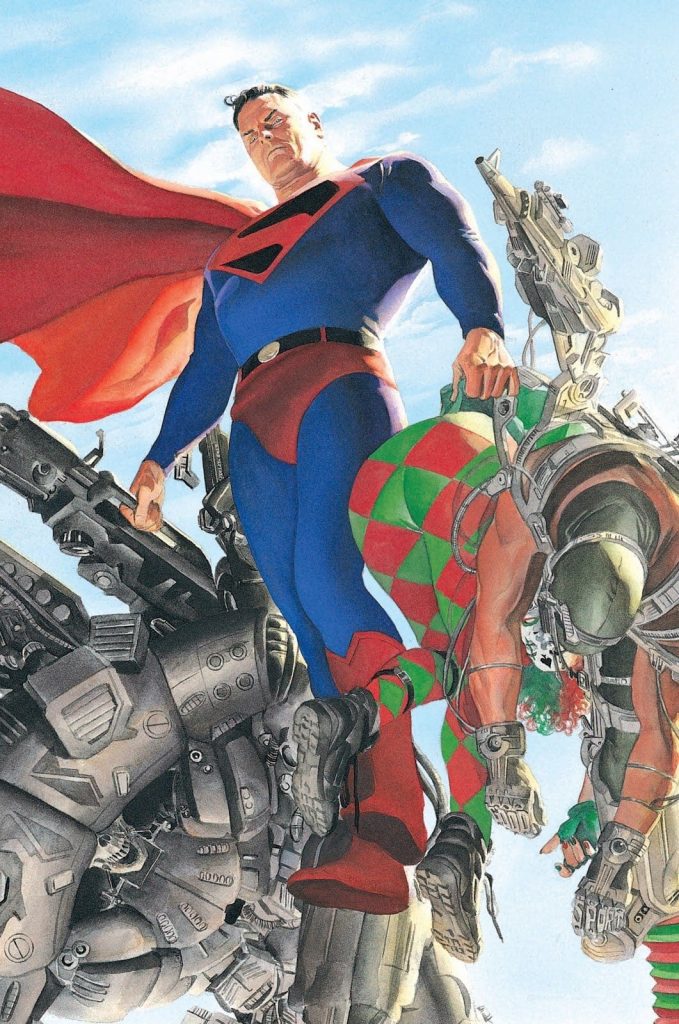 Another staple of the Alex Ross art style is borrowing the likeness of popular depictions of characters, and he really shines in this with villains. Batman is a cool character. Dude has a great mask and another cool cape, but his villains are what make his stories shine. What we get then is something like Jack Nicholson’s Joker translated into a comic page perfectly. Just like we get more life from characters we’ve only seen on the page, we get the page from characters we’ve only seen alive. And once they’re in there, the villains of Ross’s work are perfectly shown as the overwhelming force that they are. 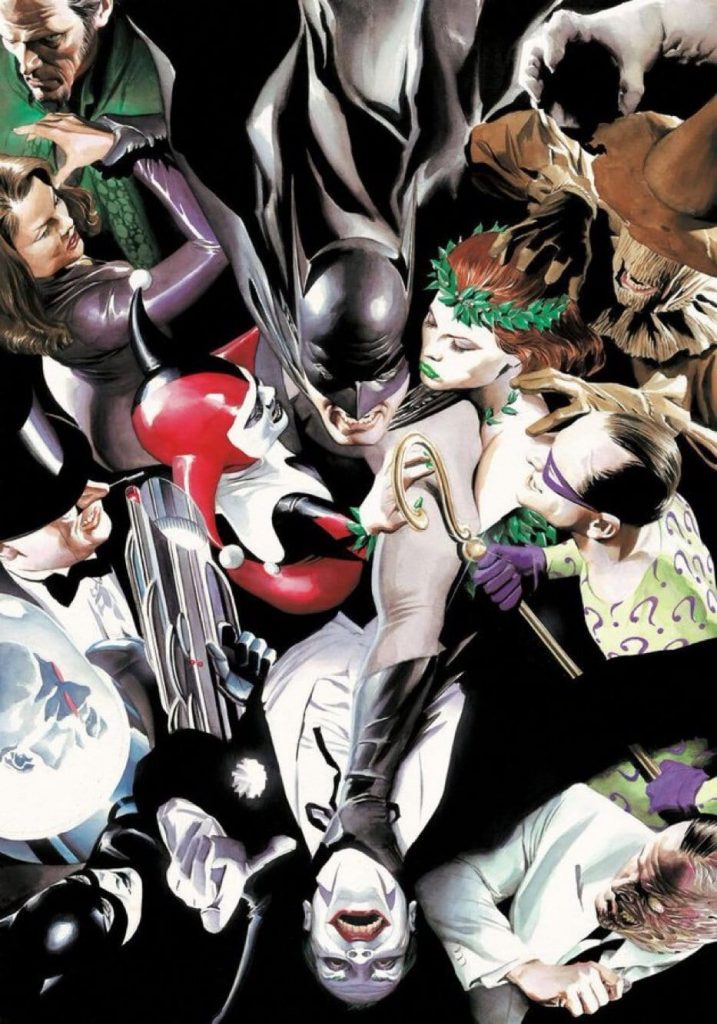 Alex Ross is an industry in comics and has given us some of the most powerful depictions of the characters we love, and the value in that really can’t be understated. His work walks that fine edge of realism and loyalty to the medium, and that has made a body of work that’s a treasure to fantasize about while looking at it taped to your wall.

And sometimes, when we’ve been good, he gives us works of art like this. 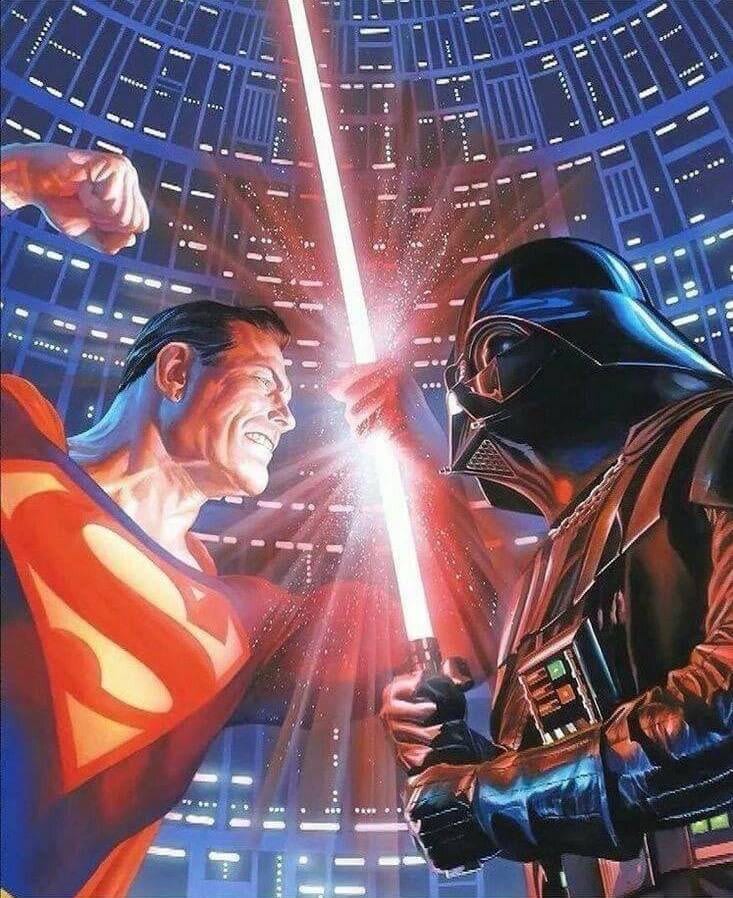 What’s your favorite painting Alex Ross has done for comics or characters beyond them? Tell us about it and what else you love about the Alex Ross Art Style in the comments below!