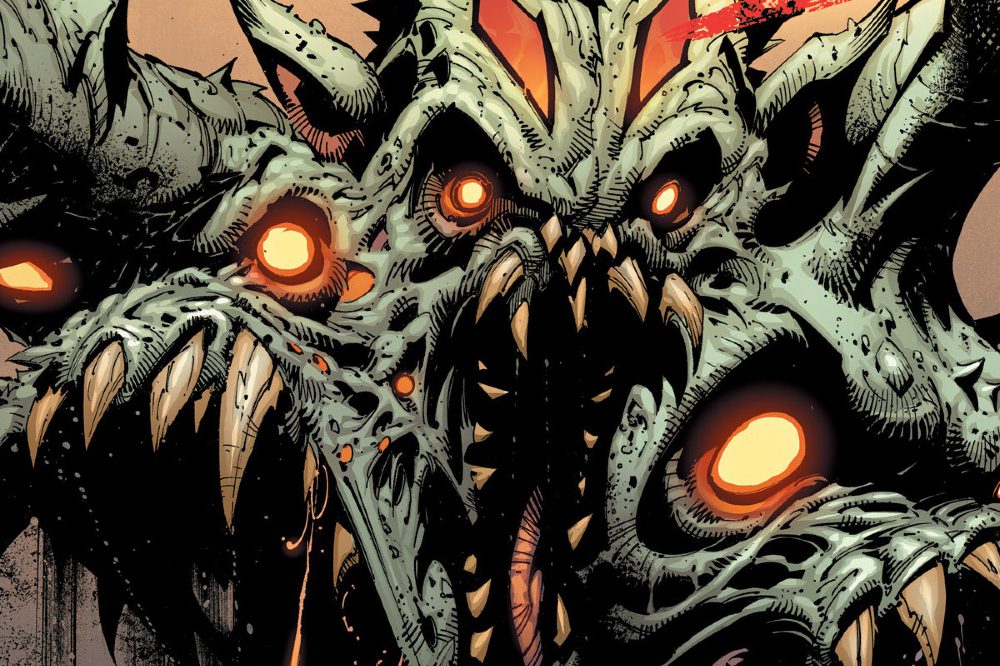 A few months back, Scott Snyder, the author behind Dark Nights: Metal and Death Metal, signed a ComiXology exclusive for eight new titles. Of course, because of his long and very successful history with artist Greg Capullo, “Scottober” launched with We Have Demons #1, the team’s first indie collaboration. Without the confines of the DC Comics Offices (which Capullo generally ignored anyway), Snyder and Capullo were free to go as far as their imaginations could take them. But even though We Have Demons #1 isn’t as gory and crazy as some readers might want, it’s a great start to the series – and promises much more gore later on. 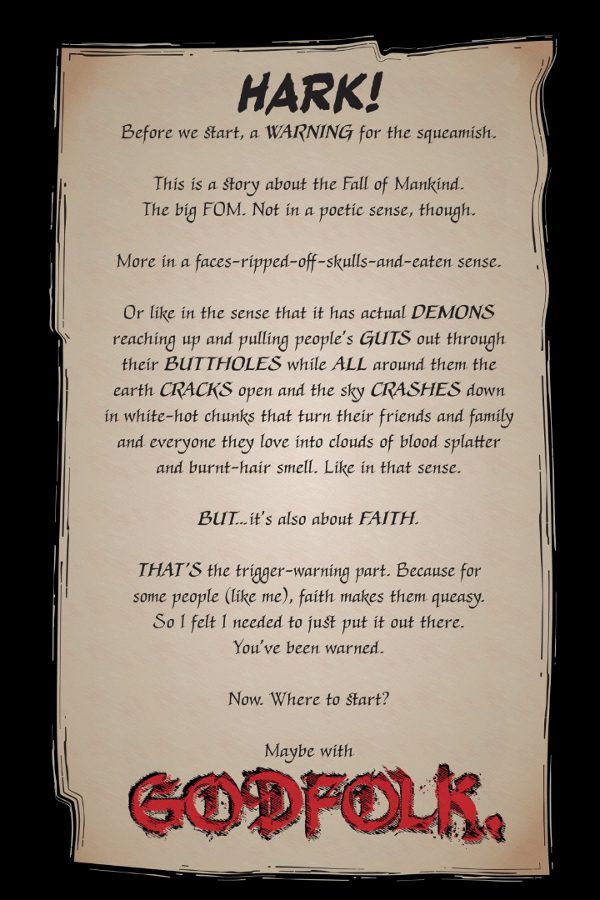 Snyder is an artist who speaks my language. Not the butthole parts, but the idea that faith can be dangerous and unsettling. It’s basically the premise of my upcoming duology, The Catholic Noir Double Feature (Preorder now! Please.)  Our hero, Lam, isn’t worried about finding demons. After her father passes down an ax made from celestial material, she seems disappointed when it appears that someone isn’t a demon. What scares her instead is having faith in her father’s night job. Preacher by day, demon hunter by night.

Lam is a compelling character. She is a quintessential millennial. We see her struggle to connect with people and the depressive disconnect that older generations label as “laziness.” Aside from everyday life wearing her down, she and her father, once very close, have grown distant. This is partly because she knew her father was keeping secrets, but he lashed out in anger when she confronted him. That actually hurt their relationship more than when he cut off her arm when she was a child (for a good reason, a poisonous snake bit her, and the venom was spreading quickly).

Lam’s narration through We Have Demons #1 is the best character development Snyder’s ever accomplished. But it’s easy to see why. Snyder’s been writing superhero stories for nearly two decades, and it’s hard to push character development for characters 80 years old. We Have Demons is entirely original. For the first time in a long time, he gets to steer the character without any shackles. And we already see how much this means to Snyder. But every great comic needs a great artist. 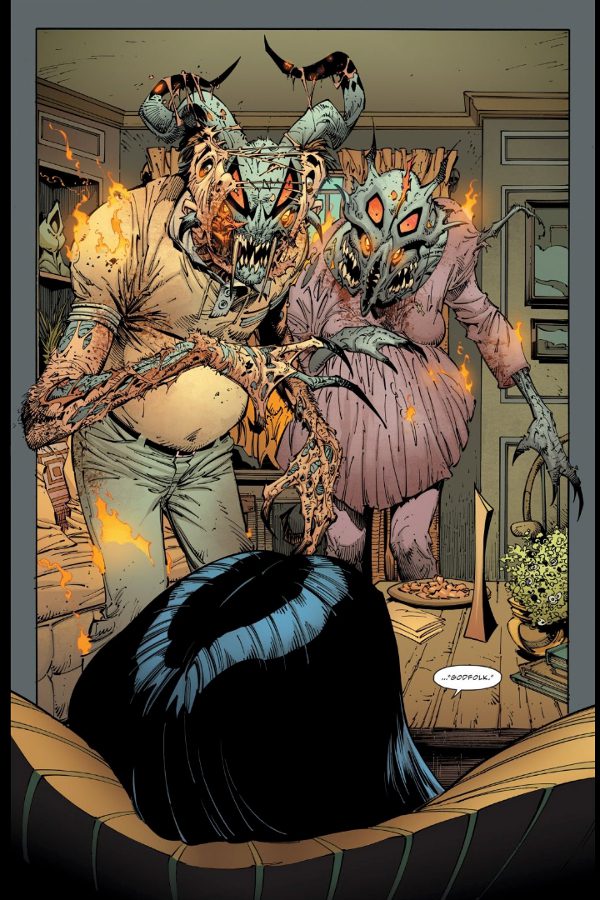 After a long run on Batman and several events and mini-series together, Snyder and Capullo have a symbiotic relationship. Going back to their early collaborations, you can see Capullo pushing Snyder’s writing while Snyder challenged Capullo’s artistic capabilities. They’ve brought out the best in each other, yet it seems like it was all practice for We Have Demons. Capullo’s demons are freaky, grotesque monsters, almost as horrifying as their human disguises.

Creatures are fun and all, but it’s the characters that Capullo delivers on most. Especially this guy: 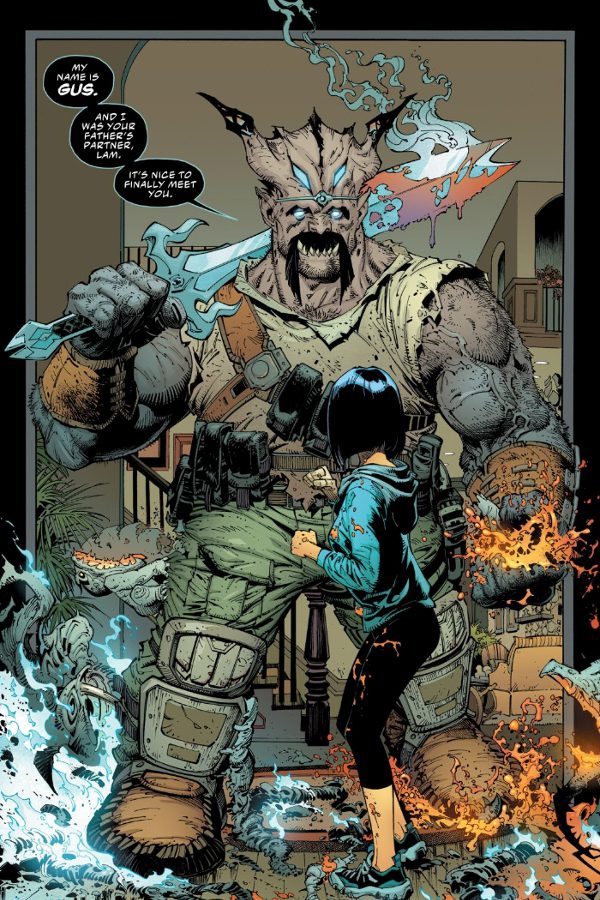 Gus is one of those “how is he so damn adorable and cuddly looking” characters. Covered in demon blood, weapons, enough pouches to make Cable jealous, with his fangs and horns, he should be terrifying. But then we have that smile, soft eyes, and handlebar mustache. Suddenly he’s the coolest uncle you’ve ever had. He’s the uncle who promised your mom he was taking you to Ron’s Gone Wrong but bought tickets to The Last Duel instead.

Even more than that, you can tell how much Capullo loves this character. Now, considering we’ve only met him briefly, Snyder and Capullo must have big plans for Gus. However, We Have Demons #1 was already great. Gus just made it even better.

Did you read We Have Demons #1? What did you think about it?

We Have Demons #1 is available now on ComiXology