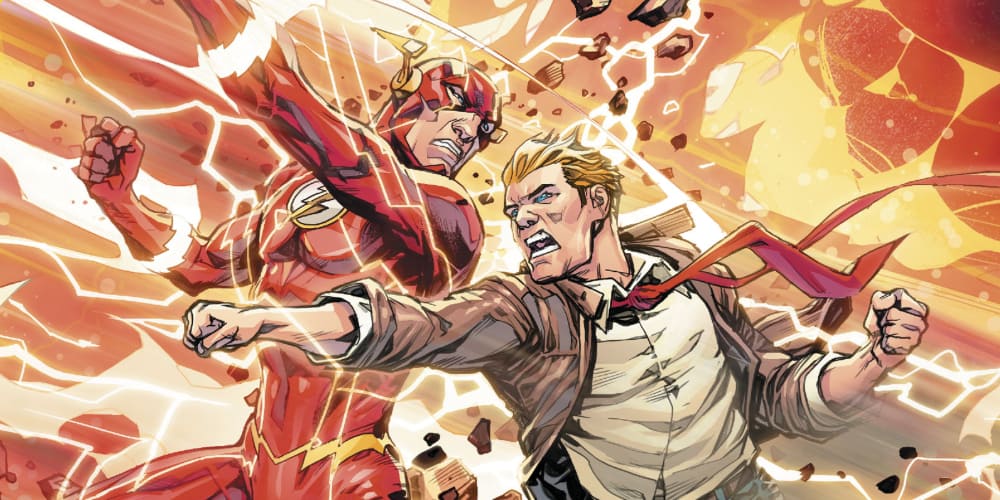 Just a couple of weeks ago, the seminal issue #750 of Wonder Woman released. Now, hot on its heels, Flash #750 arrives a little more quietly, but with just as much power. In fact, in many ways, Flash #750, is even better. There’s a joy to this issue that was missing in some of the Wonder Woman #750 stories. And while Wonder Woman #750 hinted towards the future of DC Comics, Flash #750 took it head-on. And if you’ve been following the Flash comic family, there’s a lot of payoffs.

One of the Wonder Woman # 750’s most significant problem was that the main story was the end of an arch. If you haven’t read the last few issues of Wonder Woman, you were pretty lost. Flash #750 avoids this problem, making the featured story Part 1 of a new arch. And Williamson makes sure that this is a great jumping-on point. Enough is explained for a new reader to get what’s been happening, but there’s a new story with a new villain to get excited about—Paradox. Paradox looks like Darkseid and Eternity (from Marvel) had a hate child. Just look at this guy’s magnificent mug: 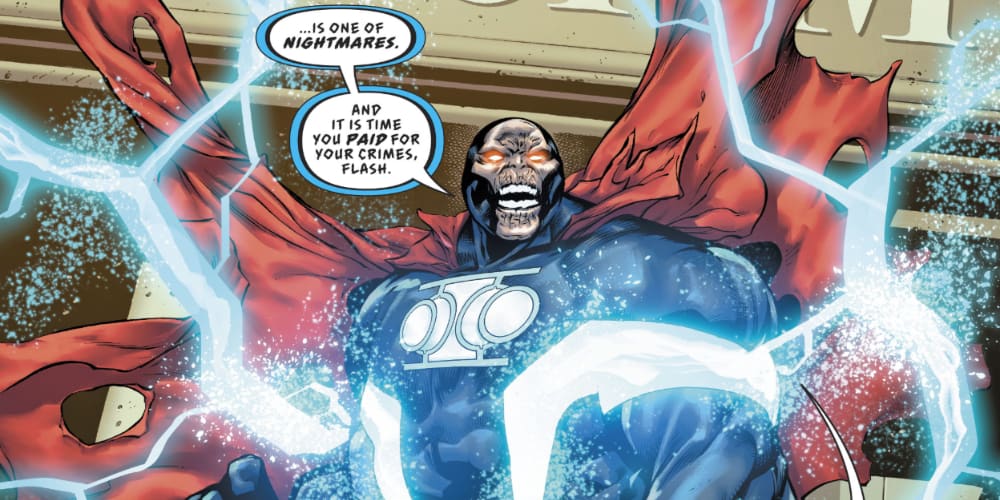 Don’t you just want to pinch his cheeks? (Image from Flash #750, art by Rafa Sandoval)

Before we get to big beautiful up there, however, there’s a great story about Iris interviewing people around Keystone City about how the Flash influenced their lives in positive ways. But Barry Allen, being the humble hero that he is, doesn’t see it. Barry—come on. Get some of that Superman swagger and embrace being an icon. You already have your own museum! 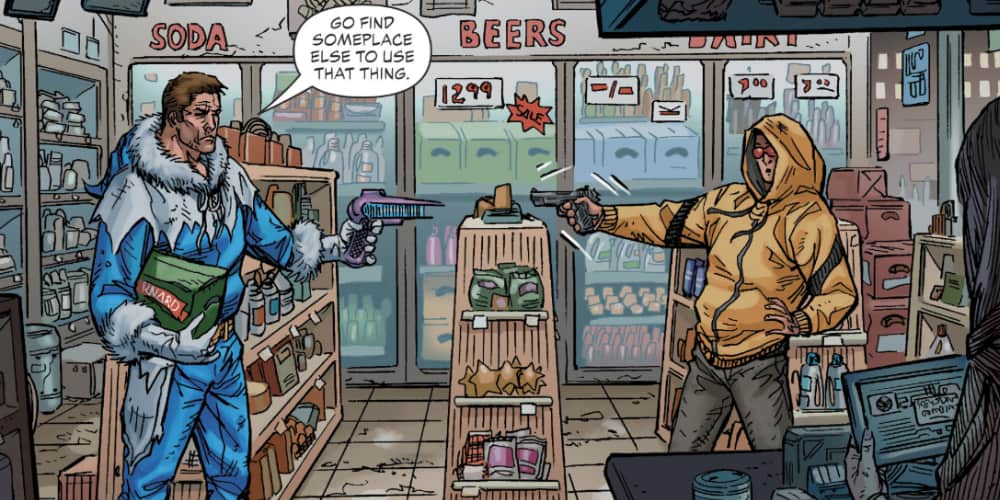 While this isn’t the most important story in Flash #750, it’s one of the best. It’s an in-depth character piece focusing on Captain Cold’s struggle to acquire a case of beer for the big playoff game. Of course, along the way, he’s faced with a robbery he isn’t committing, against a small corner store he would never rob. Captain Cold is a complex villain. He supports his city and local businesses. But everyone assumes he’s trying to pull off some crime, so his small act of kindness and escape becomes national news. Okay, he did freeze a police helicopter mid-flight on a giant ice pillar. It’s just a wonderful story.

Manapul and Buccellato had a great run of Flash during the New52 era, and their short story in #750 reminds us of how great this creative team is. Once again, Barry Allen is having doubts, so he travels the speed force to see who becomes the Flash in other universes. One is a kid reading a Flash comic. In another instance, it’s Iris and not him. But the best version? GORILLA GRODD! Behold the magnificence of Gorilla Flash, a character that needs to return and return soon: 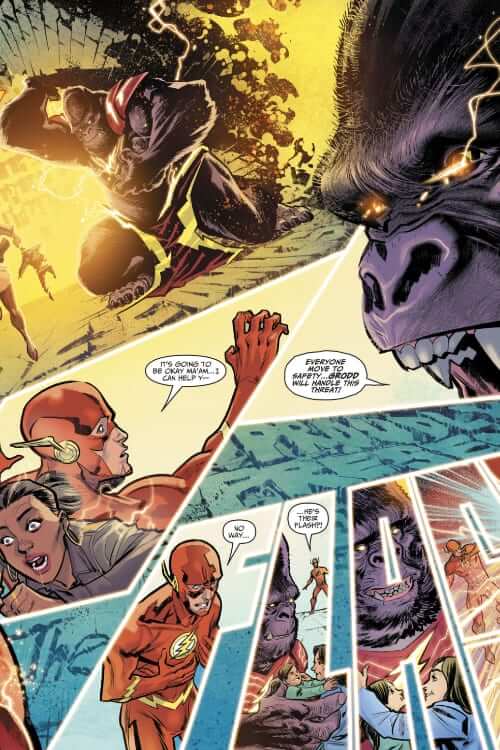 I will show up at my local comic shop at midnight for Gorilla Flash #1. (Image from Flash #750, art by Francis Manapul)

If Flash #750 is anything, it’s fun—and “Flash of All Worlds” is where we get that the most. There’s nothing “deep” about this story, and there doesn’t have to be. We just have a cool back and forth fight between Mirror Man and Flash, and the fun is seeing them take turns outsmarting each other. Here, though, it’s Rossmo’s art that pushes the story. It gets weird in some beautiful ways: 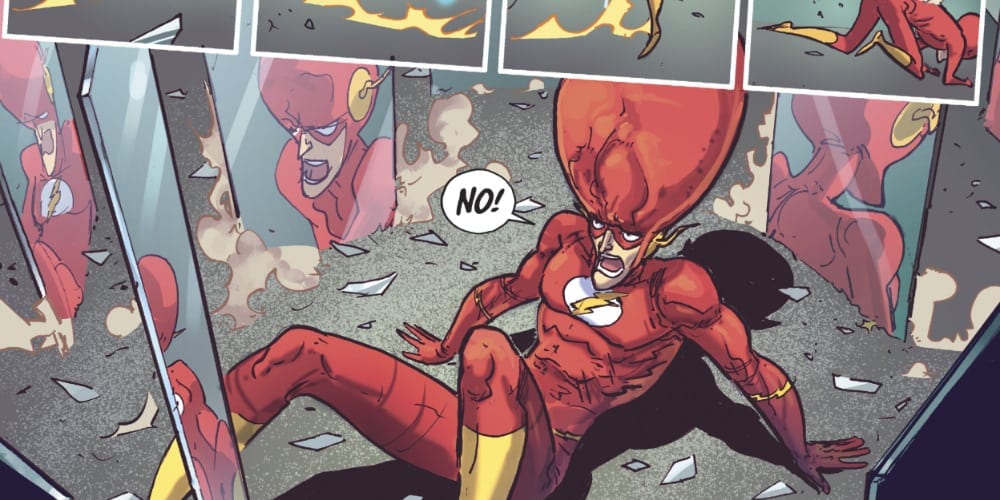 The Leader called–he says you can keep his forehead. (Image from Flash #750, art by Riley Rossmo)

Rossmo’s style is always fun and always purposely off in little ways. The exaggerations are what makes his art unique. His work on the recently wrapped Martian Manhunter was phenomenal from page one to the end. If you like the quirkiness here, make sure you pick up that trade too. 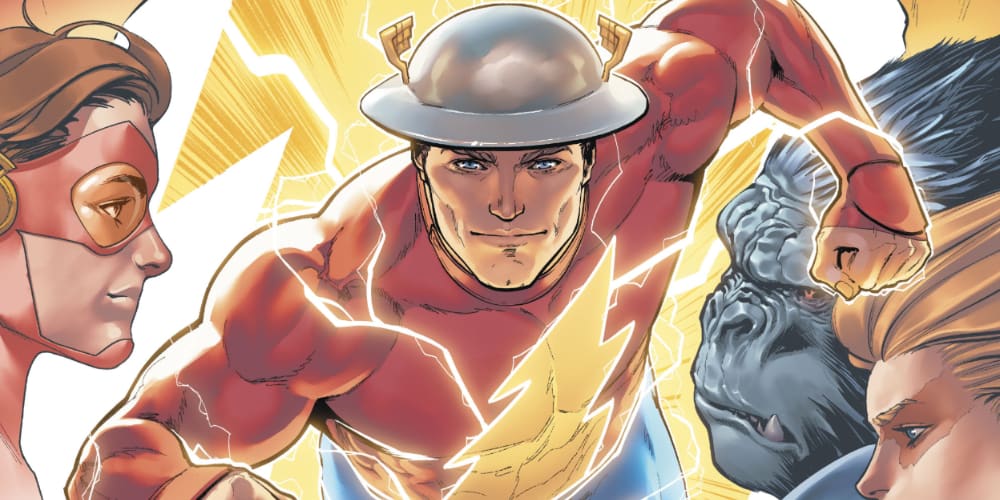 Williamson is back, this time with a story about the Flash of the 1940s. One of the biggest moments in Wonder Woman #750 was making Diana the first superhero in the DC Universe. And when Jay Garrick sees her, he’s inspired to become a superhero too. While this story is mostly just another fun installment, there’s little developments for future stories, especially a moment where another speedster whispers in Garrick’s ear that he won’t be remembered. That’s just mean, nameless speedster! Though it’s only a small bit of mystery, it’s enough added to Williamson’s central story that it’s very tempting to subscribe to future issues. If only comics were cheaper! Why do they have to be so damn good?! 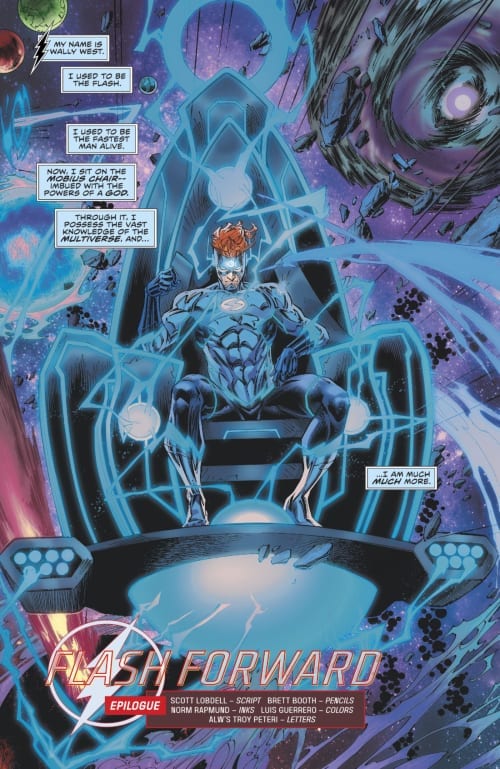 He ripped the “Man” out of “Doctor Manhattan.” (Image from Flash #750, art by Brett Booth)

The recently wrapped Flash Forward was pretty incredible. Lobdell gave Wally West a much-needed redemption arch. In Heroes in Crisis, Tom King’s DC event that saw Wally turn into a murderer, attacking a mental health refuge for heroes and villains. It was pretty messed up. In Flash Forward, the Multiverse’s guardian Tempus Fuginaut sets Wally on a quest. By the end of that quest, Wally is in power of the Mobius chair. He also has the power of Doctor. Manhattan, the “atomic blue god” who ripped Wally’s family out of the timeline, erasing them. Now that he’s essentially the most powerful being alive, Wally sees how timelines have misaligned, causing conflicting memories. This is the launching point of Generation Five, the (might not happen) event coming from DC Comics. If Wally is front and center, I’ll definitely take a look.

The Future of DC in a Flash 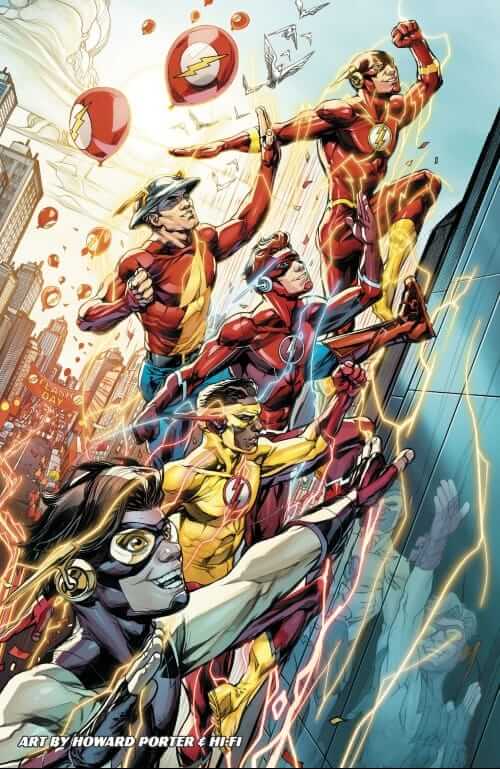 (Image from Flash #750, art by Howard Porter and Hi-Fi Colors)

While the Generation Five event is shrouded in mystery, and is likely to undergo significant changes with reset-monger Dan Didio booted out of DC Comics. Still, there are a lot of creative people at DC who know how to tell incredible stories regardless of editorial control. Between Wonder Woman and Flash #750, we get a wide variety of stories, both big and small, and some exciting hints towards the future of the DCU. At the very least, it looks like 2020 will be a good year for Flash fans.

(Featured image from Flash #750, art by Howard Porter and Hi-Fi)