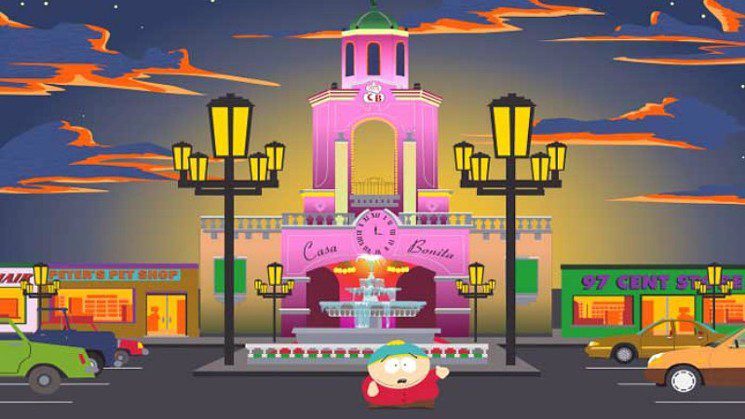 What would you do if you signed a contract worth $900 million? Most of our answers would include going on a massive vacation, paying off our debt, and maybe even making a donation or two to a meaningful cause. But would any of us run out and buy our favorite restaurants? Well, Matt Stone and Trey Parker would, and they are. Hot on the trail of the news that they signed a $900 million contract for years worth of content, the creators of South Park are buying Casa Bonita, a restaurant that they’ve featured on the show.

It’s a cold November night in 2003, and you tune in to the latest episode of South Park. Tonight’s episode is called Casa Bonita and shows our favorite youthful gang heading to a restaurant for Kyle Broflovski’s birthday. Kyle is limited to inviting three friends, and he decides to bring Stan, Kenny, and Butters. The latter is a surprise invite, as Cartman anticipated taking the third slot. But when you’re not the nicest friend around, why would you deserve an invite to the coolest restaurant there is?

The episode is filled with typical shenanigans and crude humor, but it also features the titular restaurant in all of its glory. It’s filled with a waterfall, delicious-looking food, and a mariachi band. I think that all of us would want to go to Casa Bonita, but maybe not as much as Cartman.

Many fans of the show were surprised to learn that the restaurant is a real place. In fact, it used to be in many places. Once a part of a chain of restaurants, there remains one lone Casa Bonita in Lakewood, Colorado. Its new owners are none other than the men behind the famous episode.

News surrounding the purchase has been in the air for weeks, but the deal officially became public recently. The restaurant had been failing, largely due to the ongoing coronavirus pandemic, and needed some financial love. The South Park creators seem eager to turn it back to its glory and are hoping to “make it the place we all want to make it.”

While some of the features in the South Park episode are a little bit exaggerated, it still includes many of the fun elements that we dream of. This even includes the cliff-diving shows.

The iconic episode of the Comedy Central series works as almost a love letter to the now-famous restaurant, so we can’t wait to see the kind of devotion that goes into it now that they are under new ownership.

Readers, do you have any thoughts about the creators of South Park buying Casa Bonita? And do you plan on heading there once it reopens? Perhaps a Comic Years road trip to Colorado is in our future to,  you know, make sure it’s meeting expectations…