Go on social media and try to spend 60 seconds scrolling without seeing Tiger King memes. Even if you don’t find memes, chances are your friends and family already watched the wild story of Joe Exotic. Many Netflix originals go viral, but the Netflix show Tiger King is officially the service’s most popular show of all time.

One thing Netflix does incredibly well is original docu-series about things that seem unreal. There are a number of great shows and movies on Netflix depicting real stories that seriously seem like a MadLib from hell. I mean, take Tiger King for example. Zoo owning, drug-obsessed polygamist puts up long battle against tiger activist that ends in murder. I mean, who writes this sort of stuff? Nobody; it seriously happened. Joe Exotic and Carole Baskin’s feud is keeping a ton of people entertained during social distancing measures.

The show now holds the streak of number 1 Netflix show for 15 days – a record for the streaming platform. There are a ton of shows on Netflix, and many obtain a similar viral following like the Netflix show Tiger King has these past weeks. So, how is it that this story of all the wild docu-series featured on the service is the one that sticks? 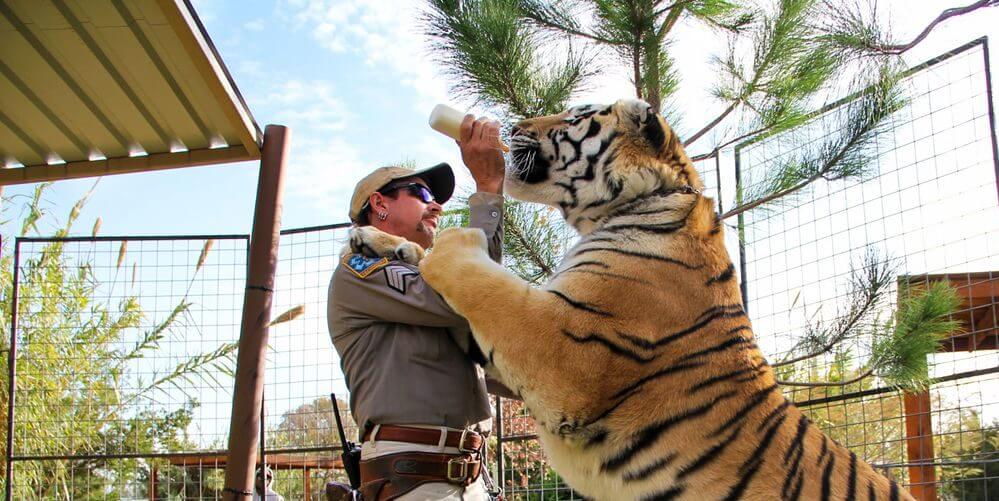 Reports point to streaming numbers have risen 85% in wake of coronavirus regulations. Essentially, the success of a show like Tiger King is a perfect storm. People’s social distancing means more bodies at home, bored, and looking for something to watch. Any successful Netflix show could easily pull a week’s worth of solid numbers. The Netflix show Tiger King is on a tear because we’re over two weeks into forced TV time.

Not to mention, the story is wild. A charismatic persona like that of Joe Exotic is seriously must-see TV. From meth heads to dangerous tigers, the show has everyone you could want for entertainment’s equivalent of a massive car pileup. Can’t-look-away disasters are that much better when based on true stories. We can’t forget Abducted in Plain Sight, the Netflix show that featured a neighbor stealing a child, twice, convincing her of aliens, and sleeping with both her mom and dad. These shows are insane and give us something to talk about at the water cooler. Or, in these past weeks’ case, the Zoom meeting. The social currency of these shows is too good to pass up, no matter how disinterested you might be. In the end, we all enjoy being a part of something, even if it’s a wild tiger handler escapade.

Did you enjoy the Netflix show Tiger King? Let us know in the comments! Thanks for reading Comic Years for all things gaming, comics, and pop culture.