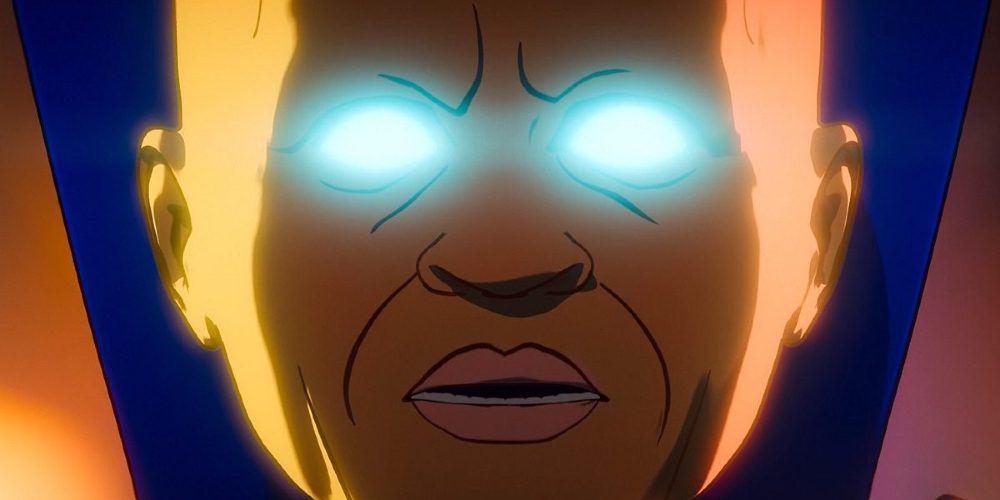 For the best comic book events, writers lay the groundwork for years. For instance, Brian Michael Bendis started planting seeds of Secret Invasion, before he even had approval to write the story. Dan Slott’s upcoming Reckoning War goes all the way back to his She-Hulk run…in 2004. On the flip side, other writers use bits of information that already exist and build a story out of it. Now, if someone went back and read New Avengers: Illuminati #1 from 2006, a throwaway line from Professor X has much more meaning: “I’d like to talk about an island in the South Pacific. It’s called Krakoa.” Jonathan Hickman weaved together various tidbits throughout the X-Men history to create House of X/Powers of X. But with the What If season finale, we see that executed in a Disney+ Marvel show in a beautiful way. 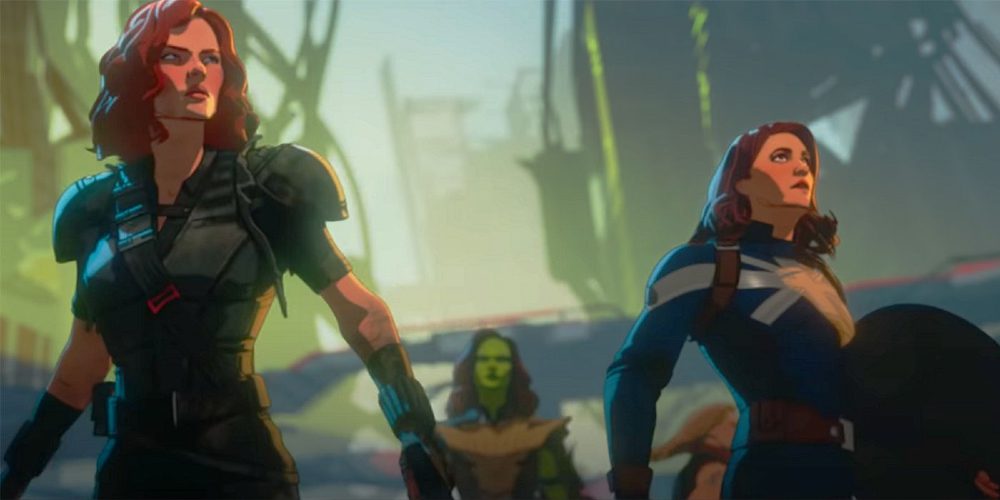 What Marvel did with the What If season finale was more than a surprise ending – it was a bait-and-switch.  When the Disney+ alternate reality show started, Marvel billed it as an anthology series. Each episode would explore a different universe where one change alters the universe drastically. For a few episodes, that’s exactly what we got…or thought we were getting. Instead, the showrunners were seeding an event. But even though we saw Ultron shatter his way through the multiverse (and Star Wars universe), we still didn’t know the extent of Marvel’s plans. So, when the What If season finale dropped, everyone rightfully lost their minds.

As our podcast host Shah Shahid often laments, Marvel Studios is full of liars. But those lies are part of the experience now. This extends beyond the MCU to anything that has the Marvel logo attached. If you’ve seen the Venom: Let There Be Carnage ending, you know exactly what we mean.

A Self-Contained MCU Event that Ties to the Greater Multiverse (Spoilers Ahead!) 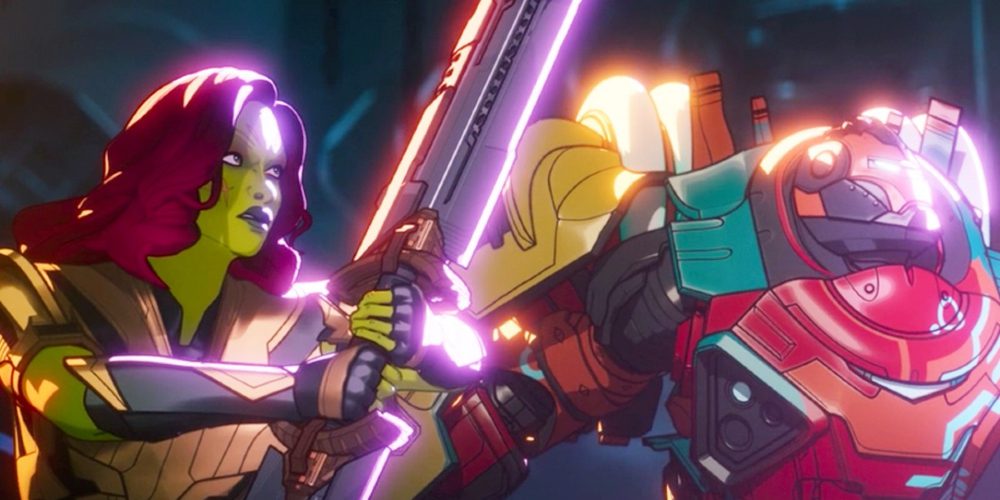 So, what was the What If season finale about? In the penultimate episode, Ultron took control of the infinity stones and realized that his plan to kill all life in the universe wasn’t enough. Then he discovers that there’s an entire multiverse for him to destroy. How did this happen? He became aware of Uatu the Watcher narrating Ultron’s dilemma to us. Wait, does that mean we’re in the MCU multiverse too? Uatu and Ultron battle it out, smashing their way through universe after universe. By the end, Uatu realizes he’s not powerful enough to defeat the Infinity Ultron, and takes refuge in Doctor Strange’s micro-universe from Episode four. Strange, the only living person in this universe, asks if he’s ready to break his vow. Thus, we get the What If season finale, “What if the Watcher Broke His Vow?” And the answer? An awesome first season closer. 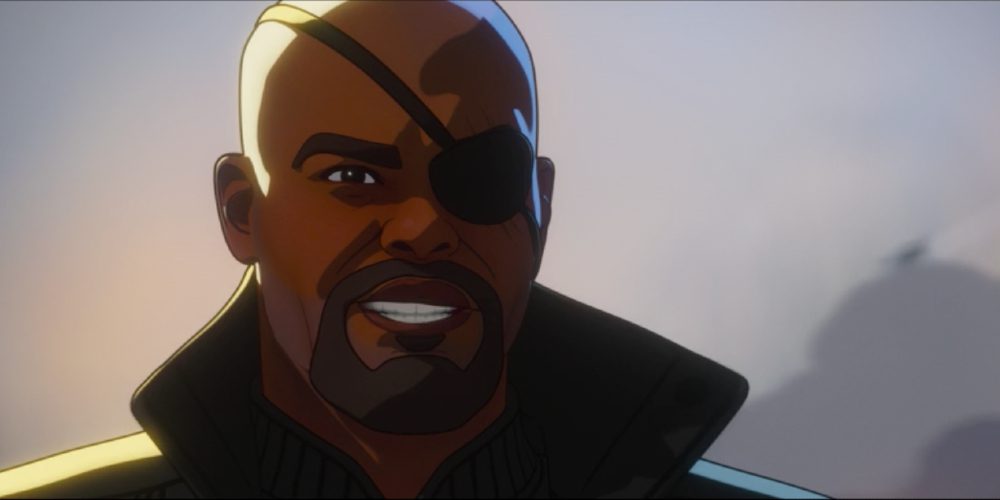 In the MCU, Nick Fury brings the Avengers together to take on threats to the planet that needs superheroes…plus an archer and a spy. Over in the live-action Disney+ shows, Contessa Valentina Allegra de Fontaine seems to be forming a Dark Avengers for reasons unknown. Just that “things are gonna get weird.” That’s Uatu’s role in the What If season finale. We follow Uatu through the various universes we’ve visited throughout the season, plus one we haven’t seen yet. In each timeline, the Watcher selects one warrior. Captain Carter, Star-Lord T’challa, only child Thor, a Gamora that killed Thanos, and…King Killmonger. Along with Doctor Strange, he names them “The Guardians of the Multiverse.” AKA: Future Disney+ show and Marvel Comics ongoing series.

This team is tasked to do the impossible: defeat Infinity Ultron. But just as Fury and Fontaine have secret cards up their sleeves, so does Uatu. There’s a secret seventh and eighth member of the Guardians of the Multiverse. First, we get the lone survivor of the Infinity Ultron universe, Black Widow. She still carries the Armin Zola arrow, waiting for her chance to use it on Ultron. The Guardians give her that moment. Oh, and the eighth member? Did you really think Uatu forgot about episode 5? That’s right. We get to see Zombie Wanda take on Infinity Ultron in the What If season finale. 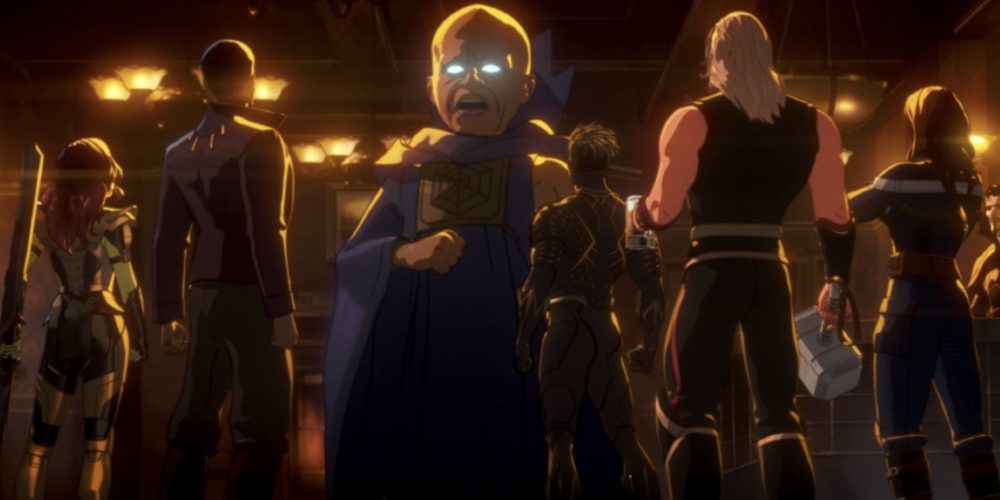 At the end of Infinity War, the Avengers lose. This is after Strange says that there is only one scenario where they succeed. However, in Endgame, we learn the truth: Strange knew they had to fail then to succeed later. Uatu uses the same gambit, withholding vital information so that events play out the way he needs them to. In this case, he knows the plan to destroy the Infinity Stones will fail. He also knows that Killmonger will betray the Guardians. As Armin Zola-Ultron-Vision fights Killmonger for the stones, Strange traps them in a micro-universe. But this makes Strange the Tony Stark of the story. His role in the victory is that he must spend eternity in a micro-universe making sure these multiversal villains don’t break free.

This mirroring of the MCU we know and love, while being its own thing, is masterful storytelling. But now, the question becomes, what the hell are they going to do for season two…and three? This particular trick only works once.

The What If Season Finale Further Develops the Multiverse Plotline 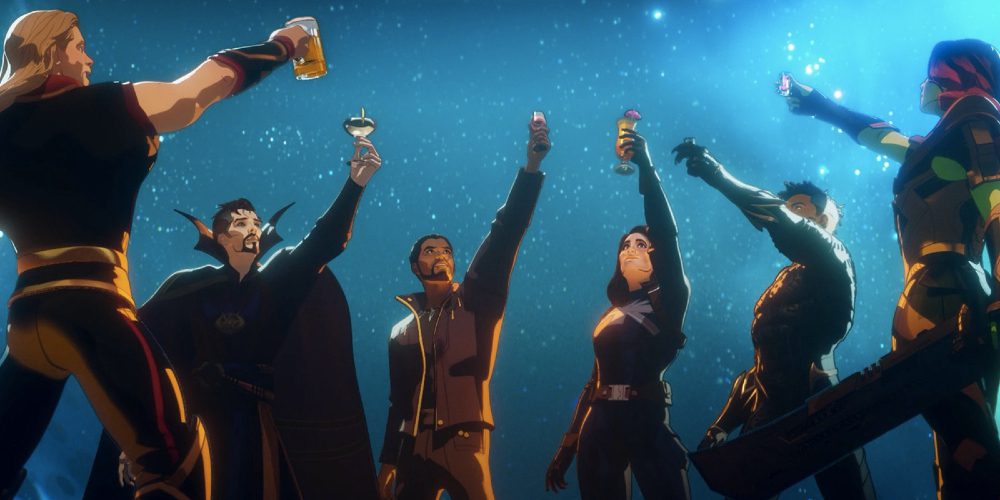 Sure, they can only use the bait-and-switch once; however, Marvel keeps surprising us with multiverse elements. First, if you can remember way back to 2020, we saw Michael Keaton’s Vulture in the trailer for Sony’s Morbius. Next, they tricked us by using Evan Peters, the Quicksilver of the Fox X-Men movie, in WandaVision. Of course, that turned out to be a dick joke and not a multiverse reference at all. Then we got the real multiverse with Loki, where we met a host of variant Lokis and traveled to different timelines. Not to mention that (a) Kang made his debut and Sylvie broke the sacred timeline.

What If debuted soon after the Loki season finale, which felt thematically appropriate. We got the big, major confirmation about the multiverse when the Spider-Man: No Way Home trailer broke the internet. We assumed that we would have to wait for December to see the multiverse collide. But we were duped again. The end credit scene of Venom: Let there Be Carnage launched the weirdest superhero couple right into the MCU. Oh, and we still have Eternals coming up.

The What If finale is a great ending to the first season. But more than that, like most Marvel movies and shows, it got us excited for what comes next.

My What If Season Two Pitch: What if…Carnage Went to the MCU Instead of Venom?