Outlawed Ewing Jacinto Give Marvel Teenage Superheroes a Time Out. 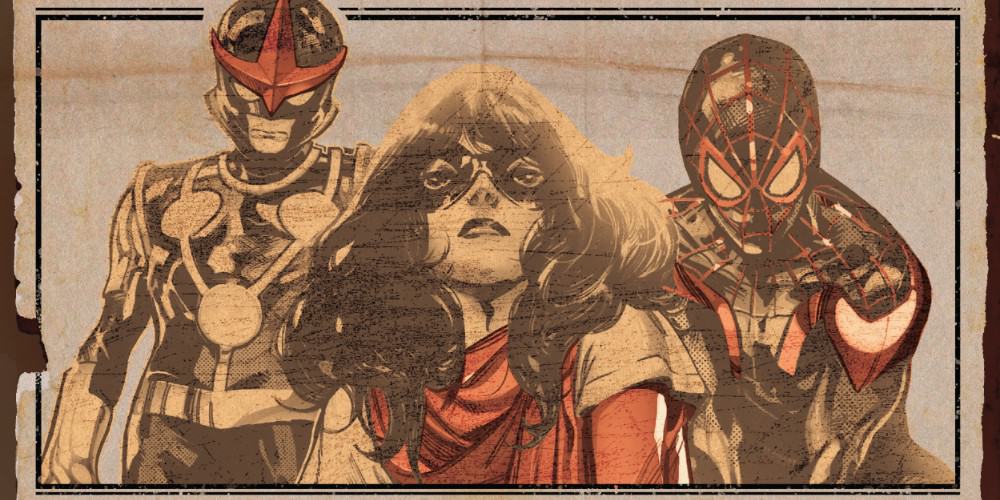 For as long as comics existed, teenage superheroes were part of that world. Robin wasn’t even a teenager yet when Batman decided he was ready to be a sidekick. Then there was Spider-Man, a kid in high school, studying for math tests as he beat down Doctor Octopus. Also, we can’t forget that Charles Xavier crafted an entire team of teenage mutants to send into battle. Somehow, that made sense. But now, in Marvel Comics’ Outlawed, writer Eve Ewing and artist Kim Jacinto are showing how ludicrous that idea is. The question is, however, even if they outlaw teenagers dressing in capes, what do you do with a bunch of extremely powerful adolescents? 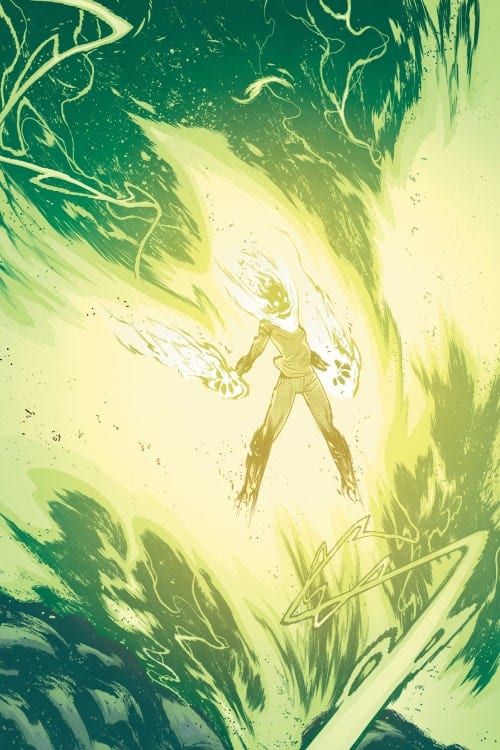 In 2006, New Warrior and young hero at the time, Speedball (who would change his name to Penance for a while), caused the villain Nitro to explode. The blast took out an entire small town including an elementary school. There’s a version of that catastrophe in Outlawed, though Ewing and Jacinto spare us from a bunch of dead children. It’s more that the idea is present. A group of young heroes with a little too much confidence and not enough experience cause a massive explosion that takes out a school (evacuated, at least). But it’s this incident that finally makes the federal government decide to make 21 the legal age for superhero activities.

The major difference between Outlawed and Civil War is that Ewing and Jacinto amplify the moment and the emotion behind it. Even without knowing the character that well, we learn a lot about them. We get their Congressional testimonies, which helps a lot. But their in-battle banter and communications help a lot too. In Civil War, we didn’t see the New Warriors again in the series, which is a little strange. 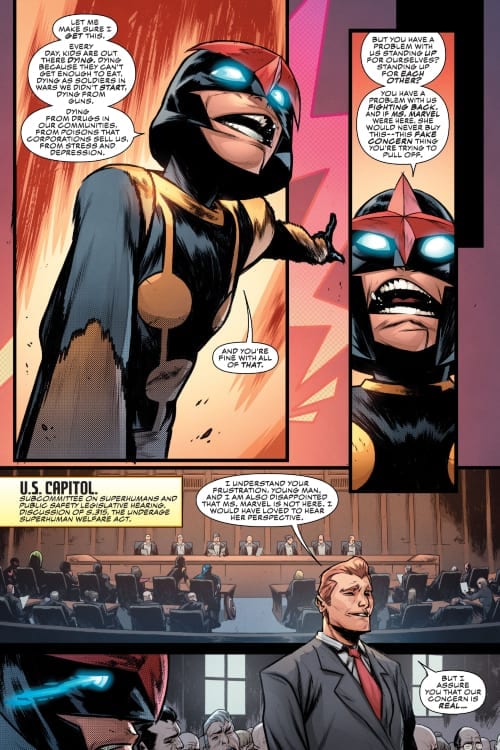 It wouldn’t be much of an event if there wasn’t some kind of major change—and the name of the comic sort of says it all anyway. But the US Government acts fast. As soon as they sign the bill into law, agents of C.R.A.D.L.E. (Child-hero Reconnaissance And Disruption Law Enforcement…yeah) take action. Right away, they come for Moon Girl, the West Coast Avengers, and the rest of the Champions. Also, they hunt Ms. Marvel. But that’s not even the biggest sucker punch Ewing and Jacinto deliver in Outlawed—it’s who is helping the US Government. Former New Warriors and teen heroes Justice and Speedball. Yes, that Speedball. He’s now rounding up teenagers doing the very thing he used to do.

Kim Jacinto Has the Best Style for Outlawed, and the Perfect Match For Eve Ewing 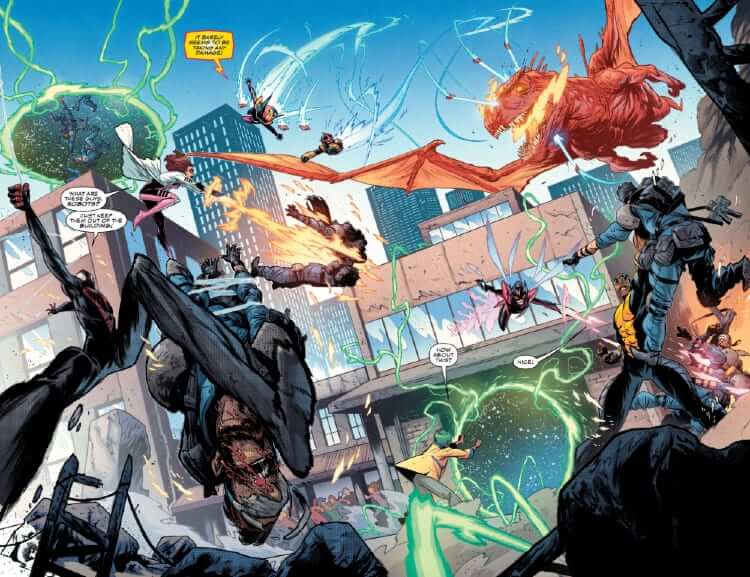 Chris Bachalo, Humberto Ramos, meet Kim Jacinto—your new competition. Since I’m not an artist, I usually avoid critiquing the art too much, unless I absolutely love it (like every time I read something with Mike Deodato). Jacinto brings out the full craziness in the story Jacinto tells. The exaggerations are very reminiscent of Bachallo and Ramos, but she stands on her own too. And Espen Grundetjern’s colors round it off as a true Young Adult superhero epic…in just 33 pages. Just look at the insane double-page battle above. Insanity in a pen.

No Need For a Giant Mini-Series and Tons of Crossovers 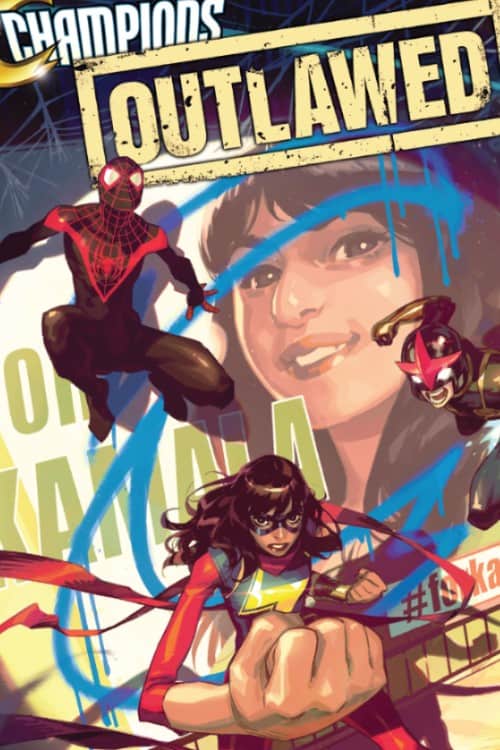 Outlawed, as a one-shot, is the entire event. Not a six-issue miniseries with 15 different titles. We’ll get that starting with Empyre next month. Instead, we’ll see the story Ewing and Jacinto started here continued in the new Champions series starting next month. Aside from that, there’s a New Warriors mini-series, and a new Power Pack. The other tie-ins run through already existing series, Ms. Marvel and Miles Morales: Spider-Man. At least Marvel is considering our wallets, for now. The only real downside is that Jacinto won’t be the artist on Eve Ewing’s Champions—just Outlawed.

Marvel
Who Is Gamora: Thanos’ Daughter Who Transformed To Protect The Galaxy
Marvel
Who is Star-Lord? Let’s Get To Know The Guardians Of The Galaxy
COMICS
Who Is Will Eisner? And Why Is There An Award In his Honor?
COMICS
Who Is Brian Bolland? From Judge Dredd To The Killing Joke
COMICS
Who is Bill Finger? The Co-Creator And Mastermind Behind Batman
Marvel
Who Is Wiccan? One Of The Most Powerful Magicians In The Marvel Universe