An Avengers team consisting of Marvel’s deadliest warriors makes a lot of sense. The X-Men have their X-Force team, and even Asgard is getting their own team, Strikeforce. There needs to be a team of people willing to do what other heroes won’t. And by the end of Savage Avengers #5, we have that team joined together by blood.

A LOT of blood.

Savage Avengers #5 concludes the first story arc for the new team. The sorcerer Kulan Gath brought to Earth the marrow god, Jhoutun Lau. Lau’s your typical born-in-a-star and gets bigger and stronger with every person he eats. You know the guy. Generally looks like this: 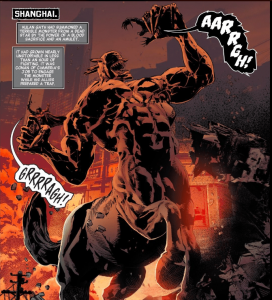 He looks just like my old boss, Fred. (Marvel Comics)

Like most giant apocalyptic creatures that come to devour the Earth, our Savage Avengers defeat him in a little less than 5 seconds—and in quite a savage fashion: 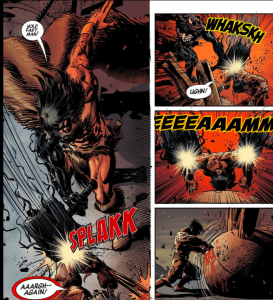 Yeah, that’s Venom and Conan hammering Wolverine’s claws into the marrow god’s skull. It proves to effective—the god creature explodes and coats them all in blood. They won! Yay!

Maybe not. Gath seems to have a bigger plan here, one that includes the Savage Avengers defeating Jhoutun Lau. He claims that the god’s blood carries an infection, and the six of them—Conan the Barbarian, Doctor Voodoo, Elektra, Venom, Wolverine, and Punisher—will be slaves to his will within a year.

The battle with the Marrow God definitely wrapped up a little too quickly, and Gath’s reveal was a bit mustache-twirling villain, but it’s still fun. Gerry Duggan’s best writing is when he officially makes them an “Avengers” team. None of them want to be called “Avengers.” 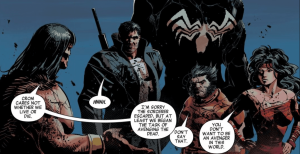 Damn it, I don’t want to be an Avenger! (Marvel Comics)

Sorry, Elektra and Wolvie—you’re Avengers if you like it or not.

The Art is the Best Part of Savage Avengers #1-5

Mike Deodato’s art is incredible. I can’t see this series working without him. Unfortunately, Savage Avengers #5 is going to be his last issue. Not just on the series, but at Marvel in general. He’s worked for the House of Ideas for 24 years. At least his last work is also some of his best. 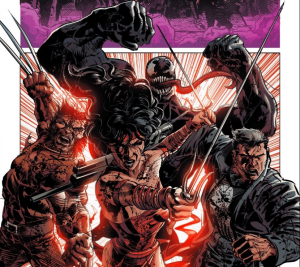 ‘It: Chapter Two’ (2019 Film) Delivers A Fulfilling End For The Losers Club
House of X #4 Has the Best X-Men Political Allegory in Decades