So far in the House of X/Powers of X series, we’ve seen the X-Men deal with the persecution of their race at the hands of humans and robots. It was all very familiar. We’ve seen these ideas since Stan and Jack were exploring the Civil Rights movement through mutants in the 60’s. Very few writers have figured out ways to keep that theme contemporary. Claremont took the idea to new extremes. The 90’s took it to X-TREME and kind of made the idea eye-rolling after a while. And there were attempts here and there. Charles Soule and Jeff Lemire’s Inhumans Vs X-Men era actually had an interesting take. Should one group of people receive power at the cost of another group’s lives? Still, we haven’t seen anything blunt or bold until House of X #4

In this issue, we see Cyclops and his team head to the Mother Mold base on the sun. It does not go well. Immediately, Husk and Archangel die. The remaining X-Men are able to destroy the base, with Wolverine literally riding the Mother Mold into the sun. And they all die. 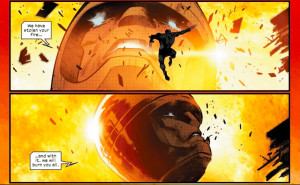 Obviously, this is not the timeline we thought it was, a trick we shouldn’t have fallen for, since Hickman already pulled that rug out from under us in Powers of X #3. It seems, as of now, he’s done it again, but that’s not the biggest point here. Everything is leading to Xavier’s words at the end. Even the “Stan’s Soap Box” Marvel’s been featuring seems to build towards the final words of House of X #4. 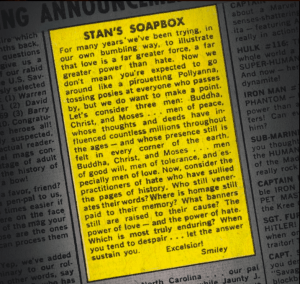 We miss you, Stan. (Marvel Comics) 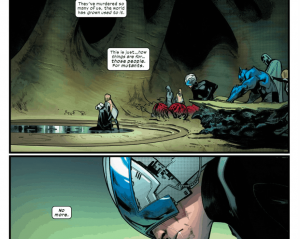 Yeah. This is a very in-your-face message. It’s not hokey or trite or forced. It isn’t Havok comparing the term “mutant” to the N-word. It’s not trying to hint at “this is what it’s like to be a minority in 2019.” Instead, it goes for the jugular. House of X #4 draws a line in the sand. It says to the fanbase who “don’t want politics” in their comics: “We’re done trying to placate your fears.”

It’s not the only Marvel comic to do this recently, as the Punisher condemned police officers using his symbol. And over at DC, Lois Lane is stirring the political maelstrom, taking on the border camps crisis. Those two comics reminded us that comics are, and have always been, a reflection on what is wrong in society today. But House of X #4 says “we’re back and we’re here to fight.”

And Xavier is done with this treatment.

Grade: Social Justice Superheroes are back!

Oh, and to show off how beautiful art and writing merge into one… 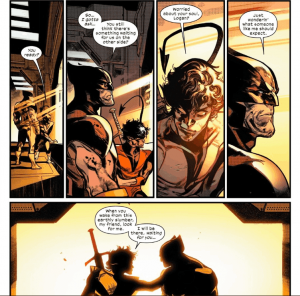