Miyazaki Graphic Novel Gets US Release This November - Comic Years

Miyazaki Graphic Novel Gets US Release This November

I had recently written about the opening of Ghibli Park on November 1 and now there’s even more exciting news for Hayao Miyazaki fans this November: a Hayao Miyazaki graphic novel gets a US release! Read on for more information about Shuna’s Journey, a graphic novel which Miyazaki said was inspired by a Tibetan folktale known as “The Prince Who Became A Dog.” The graphic novel was adapted into a radio drama, but Hayao Miyazaki never brought Shuna’s Journey to his beloved Studio Ghibli for adaptation as an anime. Still, this iconic story from one of our favorite storytellers is going to be available in English for US readers.

What Do We Know About the Miyazaki Graphic Novel US Release? 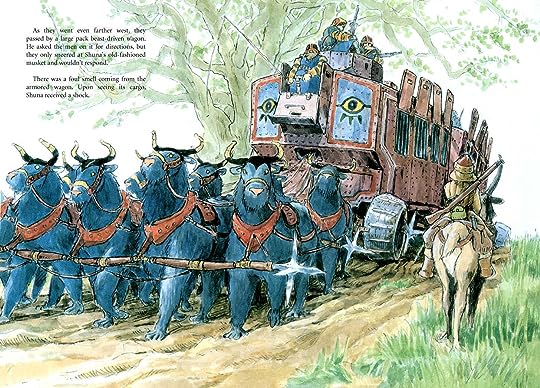 Hayao Miyazaki’s graphic novel, Shuna no Tabi (The Journey of Shuna), was first published in Japanese and was released in 1983. It was one-volume and contained watercolor-illustrations. The story follows Prince Shuna as he attempts to find a solution to his kingdom’s barren lands. As he sets off, he meets a captive girl named Thea. After rescuing her and making enemies of her captors, he attempts to continue his journey west, hoping to find the golden grain that will bring prosperity to his people.

American publisher Macmillan is going to publish the graphic novel under their graphic novel imprint, First Second, and will release it on for the first time in the US on November 1. Translator Alex Dudok de Wit tweeted the English cover and title (Shuna’s Journey) and talked a little bit more about the graphic novel, calling it more of an emonogatari (illustrated story) rather than a manga. Emonogatari were a mixed genre of picture narrative in Japanese youth magazines that were popular in the 1940s and 1950s.

See the tweets below:

The book isn't so much a manga as an emonogatari (illustrated story), with all-watercolour images and text mostly presented as captions. It is based on a Tibetan folk tale, and the fantastical pseudo-Central Asian setting has a lot in common with the world of NAUSICAÄ. (2/4) pic.twitter.com/GswSObbDhe

Apart from all that, it's just a really beautiful story, strange even by Miyazaki's standards, sombre and luminous by turns. I can't wait for this to be out!

(Miyazaki's original afterword will be included, as will a new introduction by me.) (4/4) pic.twitter.com/y5xGwk1WKX

The graphic novel sounds absolutely gorgeous and the fact that it prefigured Princess Mononoke and Tales From the Earthsea already tells us that it’s going to be visually stunning. In a message to ABC News, Mark Siegel, editorial and creative director of First Second, said:

“Fans of Princess Mononoke and Nausicaä of the Valley of the Wind — there are millions of us — will delight in finding early hints of these masterworks in gorgeous watercolor pages by Miyazaki’s own hand.”

Miyazaki is one of the most beloved animator filmmakers of our time. His films have delighted audiences for almost 40 years and critics praise his films for their message of environmentalism, love, and friendship. They also tend to touch on difficult topics (war, disease, dying) in a gentle and heartfelt way. He recently announced he was coming out of retirement last year to make one more movie based on his favorite childhood book titled How Do You Live? His other films include My Neighbor Totoro, Kiki’s Delivery Service, and the 2001 release Spirited Away, which won the Academy Award for best animated feature. He was nominated for a best animated feature Oscar for his 2013 film The Wind Rises.

Shuna’s Journey will be released from First Second on November 1, 2022.

What do you think of this Miyazaki graphic novel getting a US release? Are you as excited as I am to finally get to read it? Let us know in the comments below!

Call Of Duty 2023 Isn’t Happening, Series Taking Year Off
Bethesda Games On Steam – The Bethesda.net Launcher Is Shutting Down