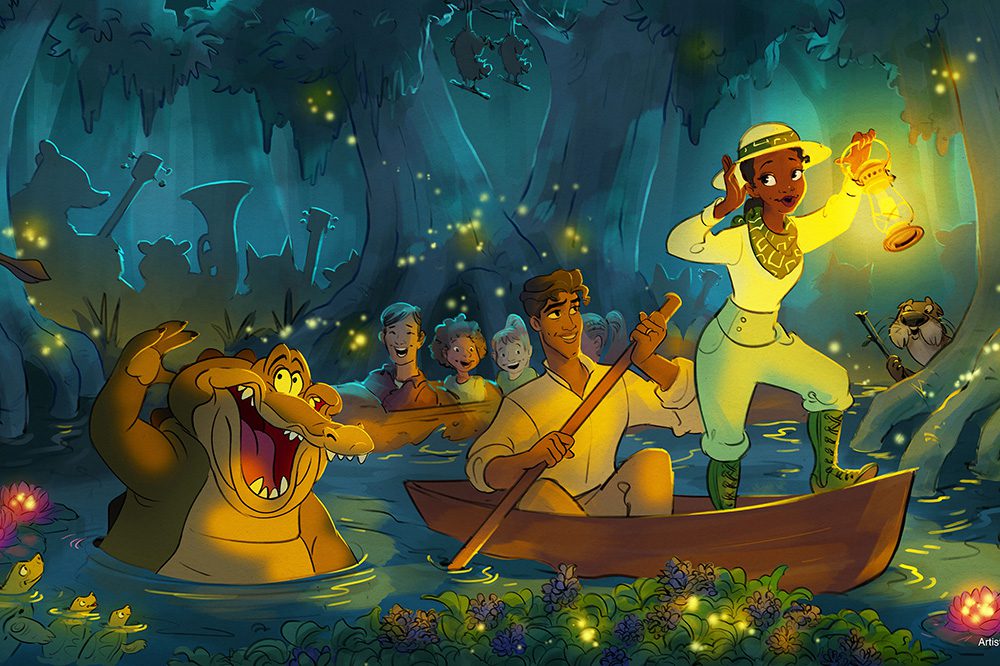 Splash Mountain was never going away as a physical ride. It’s too embedded in the heart of Disney Parks and basically the only major ride left in Critter Country. That said, the Song of the South-inspired ride needed a redo badly. Rather than tiptoe around explanation of why characters from an inherently racist movie still held central roles in an E-Ticket ride at Disneyland and the Magic Kingdom, Disney planned to redo the ride. In 2020, the company announced that the log flume juggernaut would get a Princess and the Frog makeover. We finally have an idea of the Walt Disney company envisions for the ride thanks to some gorgeous Splash Mountain redesign concept art. Artist Sharika Mahdi’s work shows signs of brilliance coming for the famous ride. Here’s what we know! 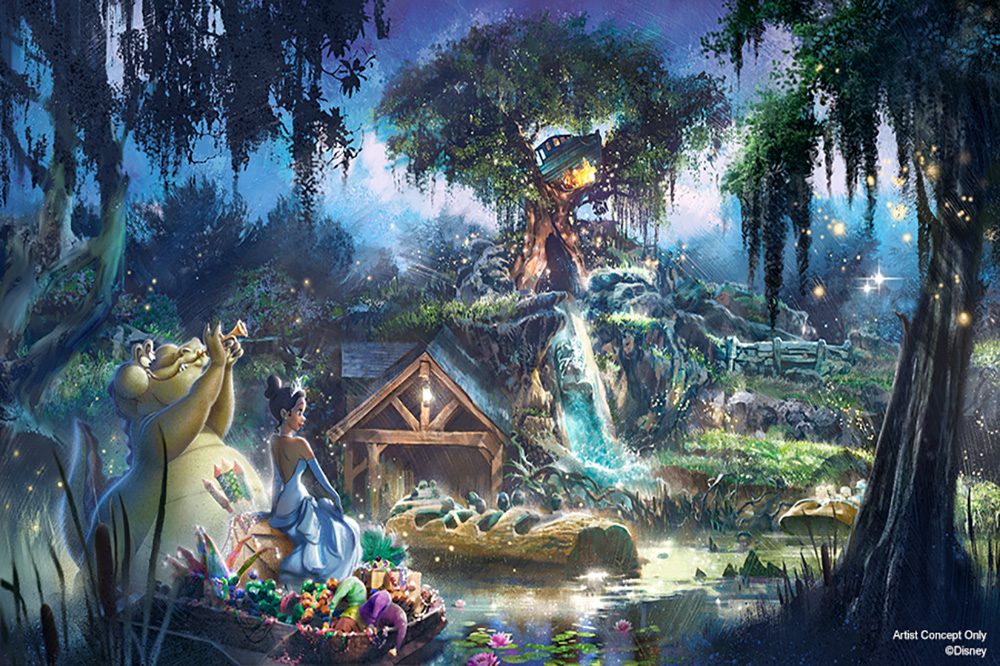 Per the Disney Parks blog, a team of Imagineers is well under way with its task of redesigning Splash Mountain. The concept is simple yet brilliant. Guests will accompany Tiana for the planning of an unforgettable Mardi Gras celebration. Along with the princess comes Naveen  Louis on this adventure that takes place after the film’s romantic ending. Original music will serve as the soundtrack to the ride. It’s a good time to be a fan of The Princess and the Frog. Tiana is set to star in her own Disney+ series, helping to bolster the Disney and Pixar content on the platform. Current series starring other movie favorites such as Monsters At Work help give fans expansions to their favorite worlds and characters.

The goal of the ride, according to Imagineers, is to really capture the heart of New Orleans in the ride. There’s already an entire New Orleans Square section of Disneyland, but it’s due for an expansion. Currently, a number of restaurants and scenery reflect the culture of New Orleans, but no ride is actually set there. In this general area, you have The Haunted Mansion and Pirates of the Caribbean, but nothing authentically New Orleans. While Splash Mountain isn’t necessarily right next to New Orleans Square, it’s a welcome addition to the Anaheim park.

Above, you can hear how excited the Imagineers working on the park are about this change. The Splash Mountain redesign concept art reflects a much needed revamp of the ride. The ride originally opened in 1992 and took much of its inspiration from the Disney film Song of the South. In the film, a character named Uncle Remus takes viewers through folktales. The film is heavily criticized, and rightfully so, for relying solely on racial characterizations to tell its tales. The ride itself doesn’t feature Uncle Remus, but does include characters from the film like Br’er Rabbit and Br’er Fox.

The ride didn’t get a whole lot of original animatronics because of careful planning from Disney. When the ride America Sings closed in 1988, many of those characters ended up in Splash Mountain so they wouldn’t go to waste. Still, the ride cost a small fortune; $75 million went into the ride. Adjusted for inflation, that’s just slightly less than Disneyland originally cost to build in 1955. Now, the ride will rid itself of a troublesome context for its characters. Much like Jungle Cruise redesigns that happened over the pandemic, it’s well overdue to see racial stereotypes taken out of rides. That said, there was no way Disney would bail on Splash Mountain as an experience. The actual ride itself is still as fun as ever; log flumes hit differently on a hot summer day.

If you’re excited by the Splash Mountain redesign concept art, then let us know in the comments! On a personal note, I’m slowly becoming the de facto Comic Years Disney Parks corespondent and I couldn’t be happier. Thanks for reading Comic Years for all things comics and pop culture!