Home » Movies » Zombieland: Double Tap Review: A Movie We Didn’t Need, But Are Happy To Have

Zombieland: Double Tap Review: A Movie We Didn’t Need, But Are Happy To Have

When a great movie is released, it doesn’t take long for people to start whispering desires about a sequel. So, when Zombieland released in 2009, people assumed that a sequel may follow closely afterward. Well, after years of no news, fans gave up hope. To the surprise of plenty, the sequel, Zombieland: Double Tap was announced back in July of 2018. It’s been a decade since the original film’s release. The stars have all continued to thrive, and bring back with them plenty of awards nominations (and a well-deserved Oscar win for Emma Stone) and some fantastic additions to their filmography. Zombieland almost felt like the Indie Film of the Zombie Genre, but Double Tap is a mature, established work for the category. So, let’s nut up and shut up, and review how Zombieland: Double Tap succeeded in giving fans a fun revisit to our favorite gang of zombie killers.

A Review Of The Zombies In Zombieland: Double Tap

A fun part about creating zombie tales is the ability to shape their behavior to the writer’s liking. Some films (The Dead Don’t Die) have Tilda Swinton mowing down zombies with a samurai sword. Some films have fast, terrifying zombies, while others have slow, methodical zombies.  Zombieland’s creatures were somewhere in the middle. They’re fast enough to fear, but not always the smartest. I mean, if Bill Murray can survive without struggle, anybody can. Right? Well, Double Tap digs a little bit deeper into the kinds of zombies that they’re dealing with. They’ve got their Homers (the dumbed-down killer creatures). There’s the Ninjas (which… never really show up after we’re told what they are). There’s the Hawkings, named after Stephen Hawking for their intelligence. And finally, the team is up against the newest beast, the T-800s.

With such a talented cast, it would be a shame to waste their abilities by doing nothing but fighting zombies. We get some pretty well-choreographed fight scenes that make the stars, especially Stone, look like cool, killing machines. But the drama of Zombieland has never been about the zombies, but about the friendships and hardships that come with dealing with a decaying world. So, while fighting off the T-800s is a pretty big goal, it’s not our main journey. Instead, Double Tap deals with the gang running after Little Rock (Abigail Breslin) after she’s run off with a hippie from Berkley. Oh, and of course there’s more relationship drama for Columbus and Wichita.

So, How Do The Zombieland: Double Tap Gang Do?

Emma Stone has proved her acting chops over the years. And Eisenberg’s movies have some pretty unforgettable characters. But, for whatever reason, there’s 0 chemistry between them. This is perhaps the only flaw in an otherwise delightful movie. Though, we can forgive this flaw, because their relationship isn’t really the focus of the film. And there’s a new lady in Columbus’ life, Madison. Played by Zoey Deutch, Madison contrasts with Wichita’s tough exterior by being the stereotypical dumb blonde. But, to her benefit, zombies only go after brains, and she doesn’t seem to have any (according to Woody Harrelson’s Tallahassee).

We spend so much time during these films watching the gang tire each other out. So, when they come across a couple of zombie killers that are almost uncannily the doppelgangers of Tallahassee and Columbus, it’s a comedic treat. Eisenberg’s chemistry with his seeing-double pal, Flagstaff, makes for an adorable flash of friendship. And watching Tallahassee’s lone-wolf persona bond with Luke Wilson’s Albuquerque reminds us that Harrelson isn’t as tough as he likes to pretend he is. 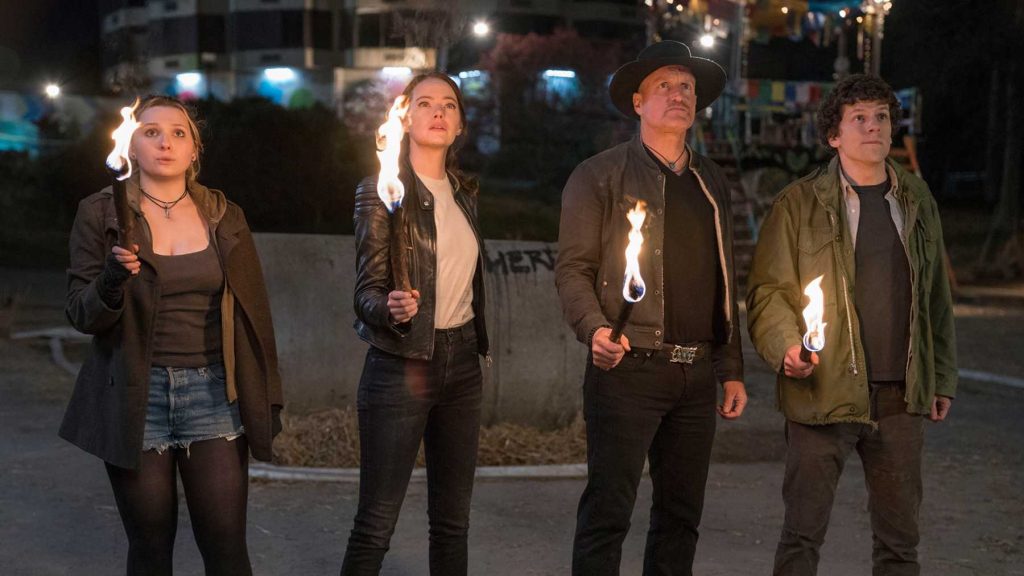 Do The Zombieland Jokes Work The Second Time Around?

There can only be so many Woody Harrelson one-liners in the world. Though, director Ruben Fleischer seems to think that we’ll never get tired of them. And, well, he’s not totally wrong. Harrelson’s no-nonsense approach to a world plagued by zombies continues to be funny, and his enthusiasm for a dying world is refreshing. The four have not let the plague get to them, and nothing will stop their cheery outlook on life.

There are no Twinkies in this movie, but there are enough laughs to make it worth a watch. It doesn’t feel as groundbreaking to the genre as Zombieland did. But regardless, we get the same fun, zombie-slashing adventures. If any zombie movie is going to make you want to go up against the living dead with a creative chest of weapons, it’s this one. Oh, and please, stay for the after-credits scene. It’s one that will give even Marvel a run for its money in terms of memorableness.

Catch Zombieland: Double Tap, the new Columbia Pictures film, in theatres now. And for those who have already watched it, what did you think? Let us know!