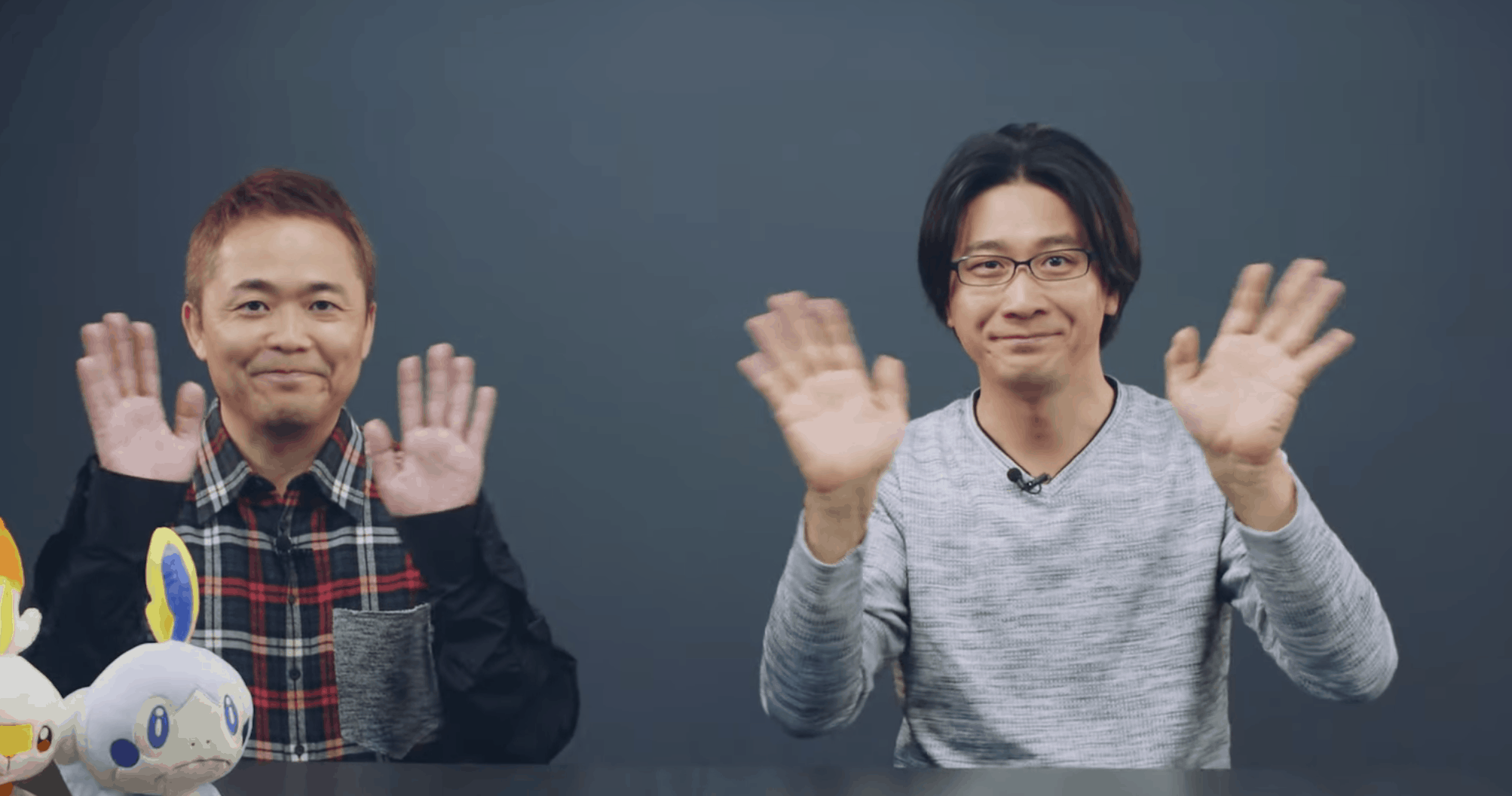 The January 9 Pokemon Direct took place this morning, I’m here to make sure you’re all caught up on the latest from Nintendo and Game Freak. Let’s get into the latest news we learned this morning.

Okay, so as I mentioned yesterday, everyone is very excited about what the Pokemon Nintendo Direct has to offer. You can read my speculation in the article, or, just enjoy this overview of what we learned today. 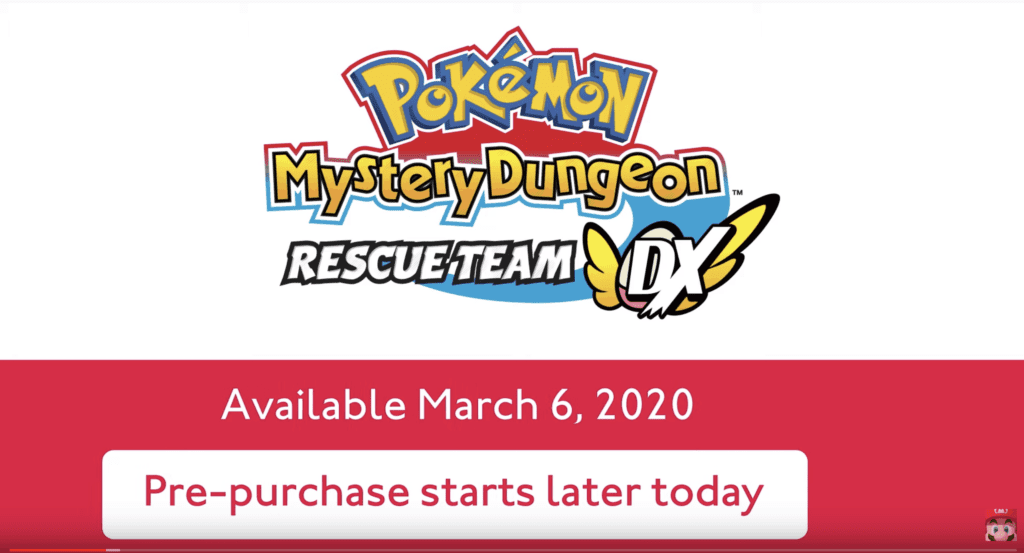 The Direct opens with an announcement of Pokemon Mystery Dungeon: Rescue Team DX. The Mystery Dungeon series is an RPG alternative to the normal Pokemon games. If you remember the first games in the series, then you’ve been playing Pokemon for awhile. The originals debuted on the Game Boy Advance in two versions: Red and Blue. Sound familiar? Well, they’re being repackaged as Pokemon Mystery Dungeon: Rescue Team DX for the Nintendo Switch. If you’re anxious for the game, then I have good news: you won’t have to wait long. The game releases March 6, 2020, with pre-purchase opening later today. A demo version of the game, for those who want to try it, releases today. All data transfers to the full game upon release.

Pokemon Sword and Shield Updates Next on January 9 Direct 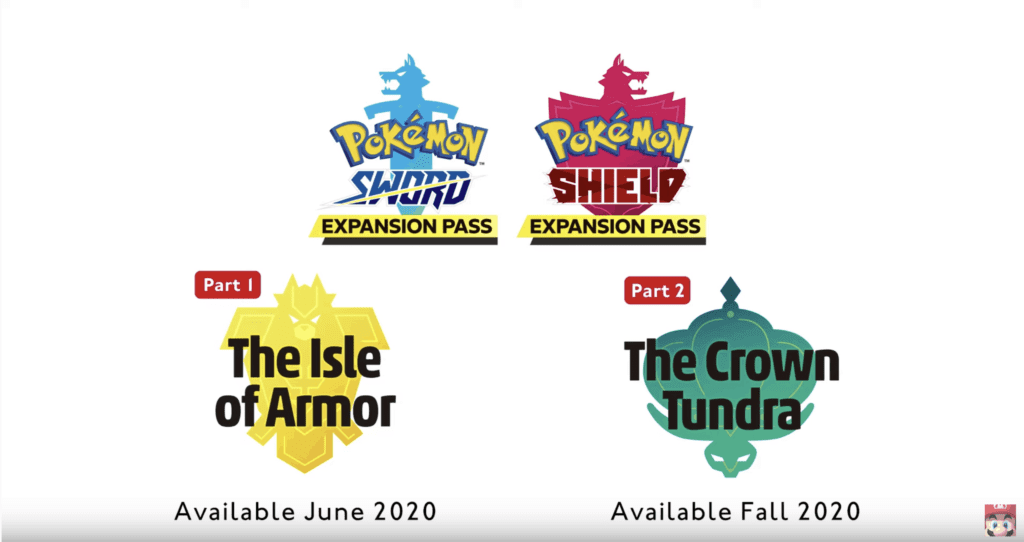 Surprise, surprise. Nintendo and Game Freak are ready to release DLC. As an obvious perk, the DLC for Sword and Shield replace the expanded versions of past Pokemon games. For example, instead of doing UltraSun and UltraMoon after Sun and Moon release, DLC lets players continue the adventure. Footage for the DLC follows, with two names emerging.

The first DLC pack is called “The Isle of Armor.” The second DLC pack is called “The Crown Tundra.” Firstly, “The Isle of Armor” releases in June 2020. Secondly, “The Crown Tundra” follows sometime in the Fall of 2020. Game Freak clearly states they are still working on the game. That’s probably why we didn’t see actual game footage. Both DLC come packaged in an expansion pass.

The DLC campaigns introduce new areas of the Galar Region, as well as new Pokemon. In keeping with the games, each version comes with game-specific Pokemon.

The Isle of Armor 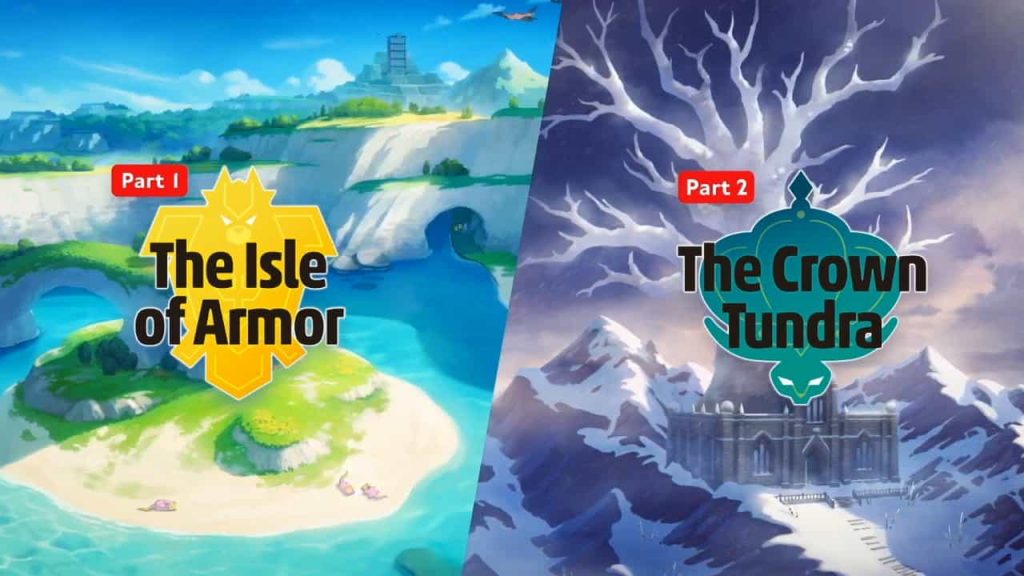 In “The Isle of Armor,” you meet Mustard, who mentors you on the mysterious island. At one point, Mustard earned the Pokemon Master title. Different rivals, Klara for Sword and Avery for Shield, come with each title. The DLC introduces a legendary Pokemon, the fighting-type Kubfu. He’s basically a little bear that Mustard gives you to train. He evolves into Urshifu, who uses a fighting-dark type style as well as a fighting-water style. Urshifu also utilizes a Gigantamax form. Upon evolution from Kubfu to Urshifu, you can choose which fighting style you want to use.

The final evolutions of the three starters in Sword and Shield are getting Gigantamax forms as well. The DLC is also bringing new fashion items, bike looks, and a few new items. The theme of “The Isle of Armor” is growth. 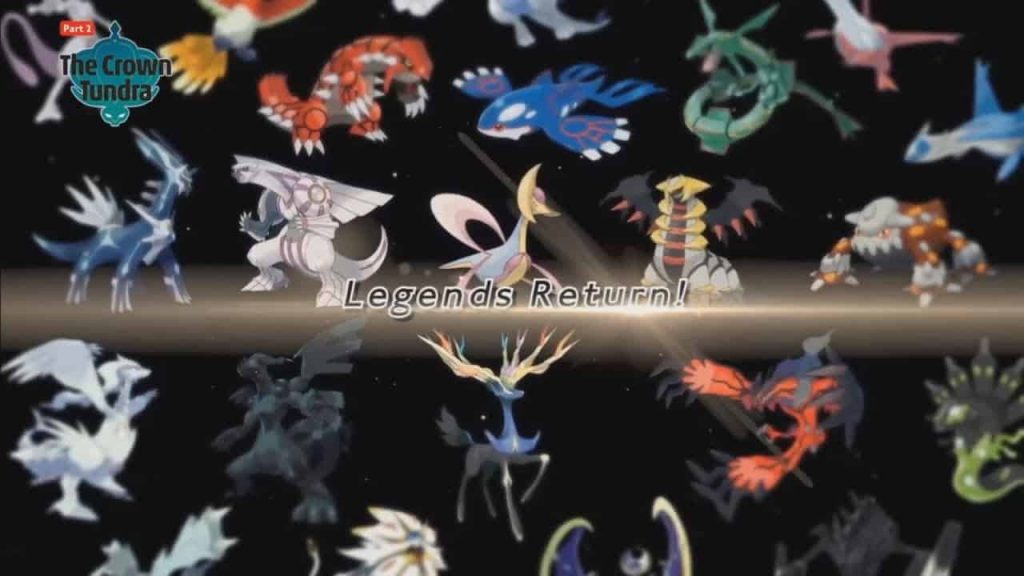 As the name suggests, “The Crown Tundra” is a frigid wintery mountain area full of villages. The area features temples and mysterious trees. You’ll meet a new companion who guides you through the area. Calyrex is the new legendary Pokemon in this DLC. It’s a psychic-grass type, and is basically fancy deer looking Pokemon. The DLC also features co-op with new dens. In these dens, you can find new additions to the game, including legendary Pokemon from past games. You get a ton of new clothing items from this region as well.

At the end of its description, we discover that both regions are seamless with the main map. We also discovered 200 new Pokemon are releasing into the game. This is likely a response to the numerous protests the game experienced before launch. 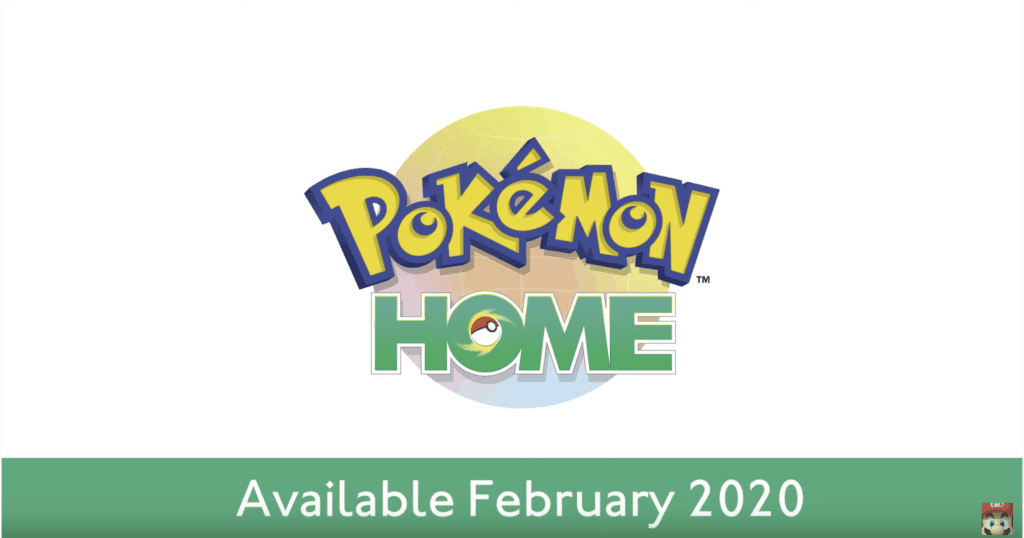 We saw mention of Pokemon Home, the bank system where you can transfer Pokemon. The company confirmed you still cannot transfer Pokemon into Sword and Shield that do not appear in the main game or expansion pass. Pokemon Home is set to launch in February 2020.

January 9 Pokemon Direct – How Much Does the DLC Cost? 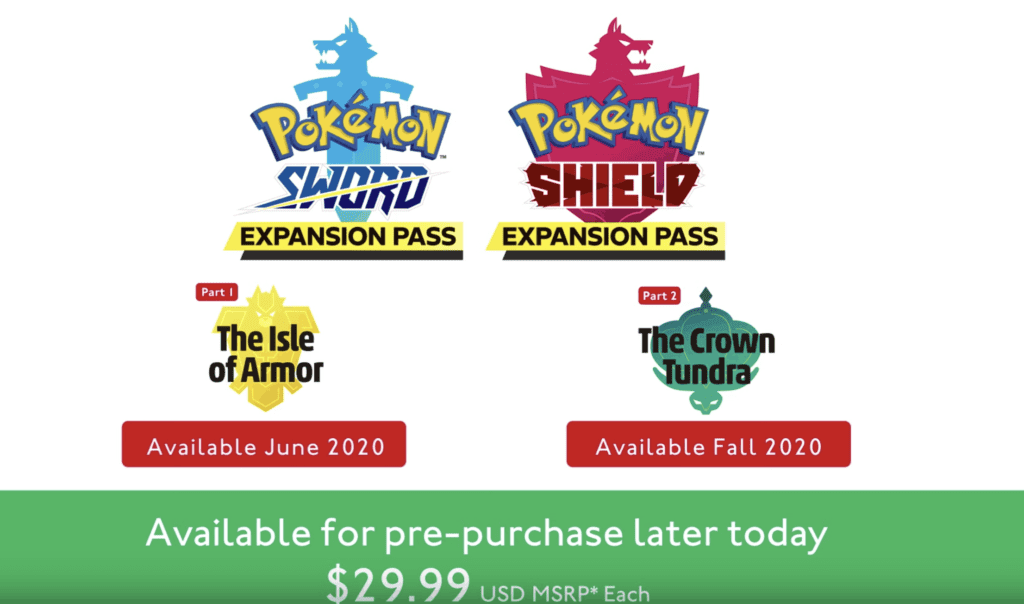 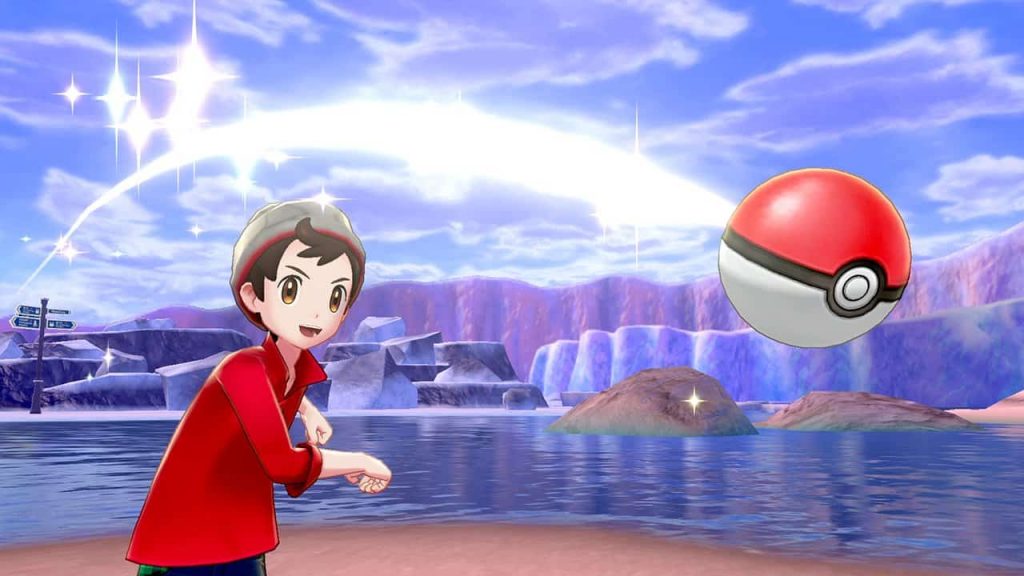 Okay, I’m going to write up this section like we’re just chatting. From my perspective, there’s more good in the January 9 Pokemon Direct than bad. The addition of 200 new Pokemon from past games is a welcome bonus. Plus, the DLC packs look pretty fun. I like the idea of separate, one-off campaigns featuring legendary Pokemon. The Pokemon Bank announcement also brings the feature to us a little sooner than expected. The announcement of Pokemon Mystery Dungeon Rescue Team DX is also fun, but it’s likely going to be $60. That’s a hefty price for a remaster of two Game Boy Advance era games.

I’m also not thrilled with the $30 DLC cost. I think $20 is fair, putting each DLC pack at $10 each. From what we saw, I don’t see $30 of new content in the upcoming DLC packs. Maybe I’m wrong; the company spokesmen said we’d see more in the coming months.

If we’re going to grade this on an A-F scale a la the American school system, I’m giving this a solid B. Nothing announced today sells people on the games who hated the missing National Dex. I don’t care how cute the little fighting bear is from “The Isle of Armor.” He’s not making up for the fact that Game Freak punted on including all Pokemon as past games had. I think players who enjoy Sword and Shield are going to be happy with the January 9 Pokemon Direct.

Are you happy with what you saw from the January 9 Pokemon Direct? Let me know in the comments!