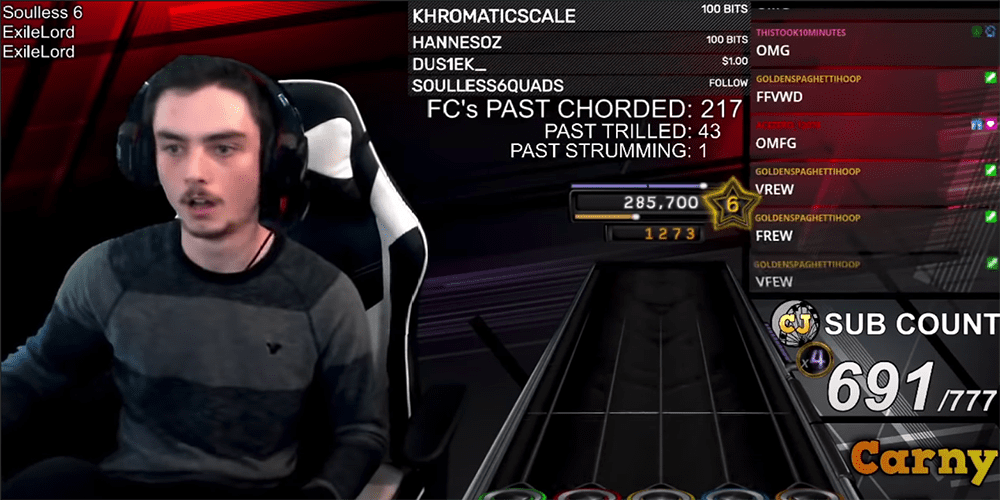 There’s a lot of awful stuff in the world, and then there’s the occasional happy story. Today, I’ve probably watched through this viral video of a popular Clone Hero streamer CarnyJared. During a recent stream, his audience watched as he tackled something he’s tried to accomplish since last August. The song Soulless 6, deemed impossible by many Clone Hero fans, was finally 100% completed. To FC something in Clone Hero, that means to hit every full combo possible. Upon finishing the task, CarnyJared looks awestruck. The video is probably the best thing you’ll watch all day.

In the video, we see a quick failed attempt to complete the song in its entirety. After talking about how seriously he’s taking these runs, CarnyJared nails the song completely. The song first popped up in 2011 and ultimately looked impossible to complete without a mistake. His reaction is pretty great. There’s something really exciting about seeing someone so determined to hit a new record make the mark. The game, as you can see, requires a ridiculous amount of hand-eye coordination and focus. Precision is also key. The plastic guitar controllers aren’t always the best at picking up every input, so you really need to develop a feel for playing these tougher tracks.

Clone Hero is a free game that mimics well-known games like Rock Band or Guitar Hero. The Guitar Hero 15th anniversary just passed last year. Clearly, the game is still a huge deal within certain gaming circles. The game first launched in 2011 as GuitaRPG by developer Ryan Foster. The community around the game fuels its continued success since its first Alpha in 2017. Fans upload charts for players to perform, ensuring everyone can contribute to the game’s continued growth. I was fairly good at Guitar Hero back in the day, but this video just put all of us to shame.

If you’re a fan of the Guitar Hero games, then I’d highly suggest checking out CarnyJared’s Twitch stream sometime! Let us know what you thought of his 100 FC in the comments!