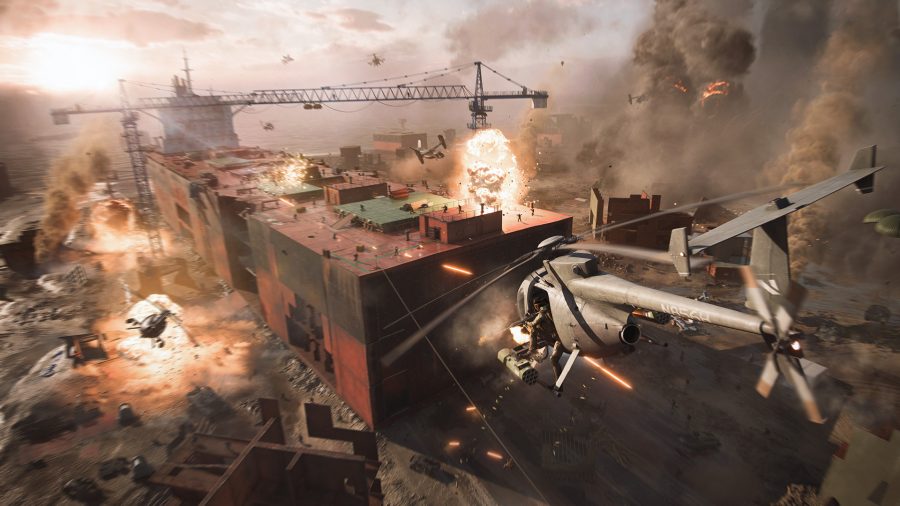 DICE is working on improving Battlefield 2042’s maps, according to a new update by the developer. These will be smaller in scale that fans of the game are already used to. Other improvements are also planned.

In a blog post, DICE notes that the changes stem from player feedback. With that feedback, the developer has highlighted five main issues with the maps. Each of these will be tackled with future updates.

One of the more notable problems fans have had with Battlefield 2042’s maps is that it often feels like a “walking simulator.” To address that, DICE is making each of the new maps smaller than current ones.

“This comes as a result of the introduction of 128 players in combination with some of the biggest maps that we’ve ever created as playspaces. While the larger maps offer more playspace and freedom, a side effect is that gameplay is now spread out more, resulting in an overall increase in time to combat when related to playing the objective.”

With the decreased distances between targets and goals, the developer hopes to overcome the relatively long walking times. As the developer notes, it plans to “reduce the overall travel time between Flag and Base Spawn on some maps”. Battle intensity is also a problem cited by DICE, particularly with the 128-person modes. These are being reduced to 64 people for modes like Breakthrough, among others.

Line of site improvements will also be coming to the game. Many players complained that, when getting from one objective to another, they’re often highly visible. Future updates will give players more chances to hide. Coupled with that is, “in order to keep combat focused, and to make it easier to understand how to get from one objective to the next,” DICE is implementing better signposting. Players will find it easier to get around. The Battlefield 2042 developer also plans to add more areas of cover throughout their maps. That’ll primarily be seen in areas that players have deemed too open and flat.

When DICE Plans to Update the Maps

Fans of the game may wonder when the changes to Battlefield 2042’s maps will come into play. At DICE notes, the planned changes will need “substantial development time,” so players shouldn’t expect them soon. Some areas will see improvements faster than others, however.

As DICE puts it:

“Our immediate priority areas of focus is to make improvements to Kaleidoscope on both Conquest, and Breakthrough. We know that we have the most opportunity to improve gameplay on this map, and this is where you can expect to see the first updates to land.”

The changes to Battlefield 2042’s maps look as though they’ll take a long and prolonged approach. Fans can expect the most problematic areas to be fixed first. That isn’t the only game-related news to be released about the game; the developer revealed that Battlefield 2042’s next update is coming soon. Update 3.3 will be multiple quality of life improvements to the game, among other updates.

What do you think? Are you hyped for the new map update for Battlefield 2042? Tell us in the comments below.