War of the Bounty Hunters: Alpha Kicks Off a Galaxy-Sized Star Wars Epic

Home » COMICS » War Of The Bounty Hunters: Alpha Kicks Off The Biggest Heist Challenge In The Galaxy (Spoiler Review!)

War Of The Bounty Hunters: Alpha Kicks Off The Biggest Heist Challenge In The Galaxy (Spoiler Review!) 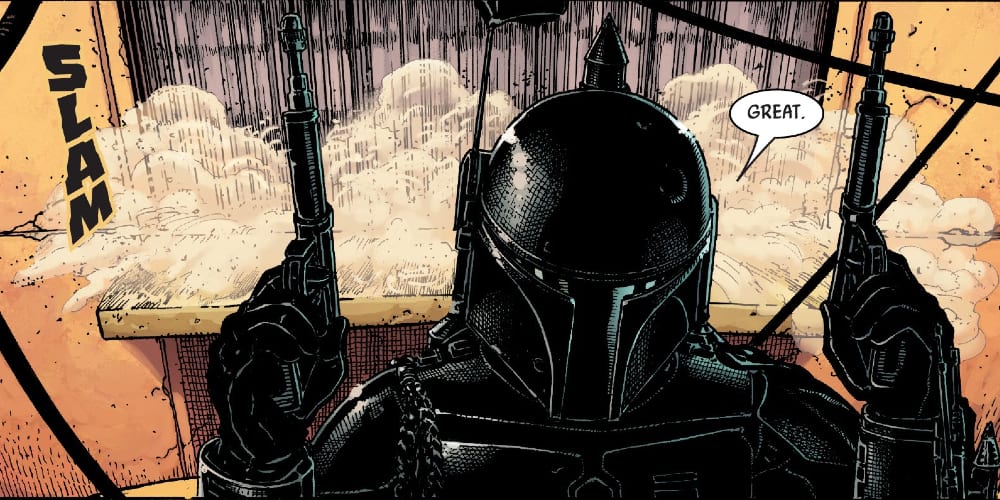 Ever see Guy Ritchie’s Snatch? That might seem like a far cry from Star Wars, but the comparison works in this case. Because that’s what War of the Bounty Hunters: Alpha kicks off: Snatch by way of Star Wars. But instead of a giant diamond in the belly of an English  Staffordshire Bull Terrier, it’s Han Solo in a block of frozen carbonite. By the end of just the prelude of the 34-part War of the Bounty Hunters event, the galactic game of pass the Han launches with deadly consequences.

Boba Fett Has a Deadline in War of the Bounty Hunters: Alpha – But Only He Knows It 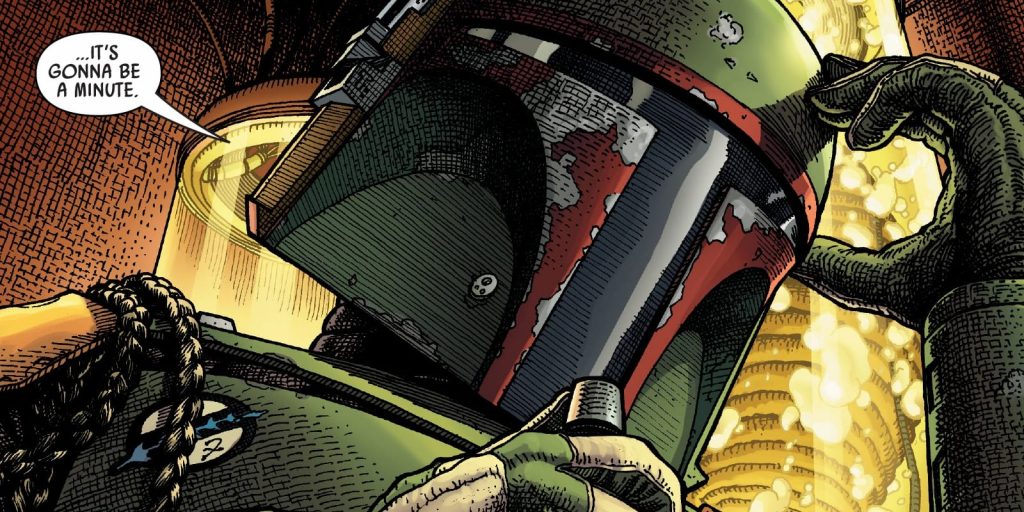 Every good caper has a ticking clock. For Boba Fett, there are two clocks.  The first is Jabba the Hutt, who really wants his new wall piece up for everyone to see. Throughout War of the Bounty Hunters: Alpha, Jabba’s right-hand man, Bib Fortuna, keeps calling Fett for status updates. However, if an angry giant slug wasn’t bad enough, there’s a problem with the cargo as well. Solo’s carbonite matrix – the thing keeping him frozen – is malfunctioning. If Fett can’t get someone to fix it fast, well… 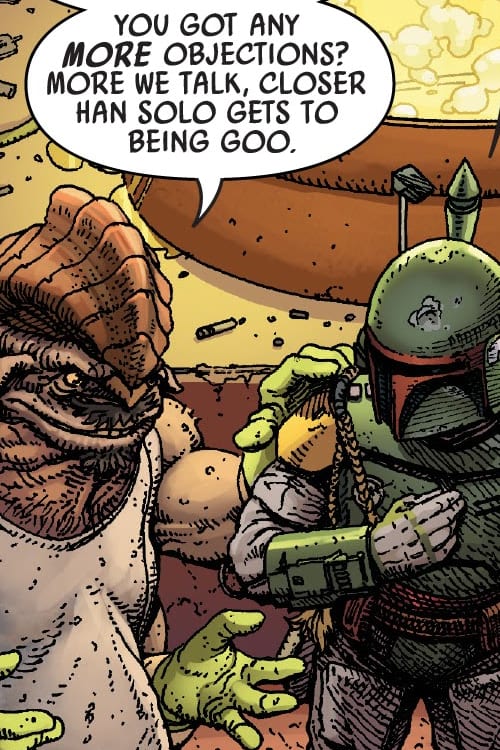 Goo Solo isn’t going to be enough to get the bounty credits. But even worse, it will piss off Jabba the Hutt, the third most dangerous person in the galaxy. Fett might be a great warrior, but he’s not “take on every bounty hunter in the entire galaxy at once” good. Luckily, he has a black market doctor/technician willing to fix Solo up in exchange for killing the champion of the local arena. Simple enough, right?

Except, when Fett returns to Doc, his friend is dead, and Solo – who is slowly melting – is gone.

War of the Bounty Hunters: Alpha – a King in Black Crossover? 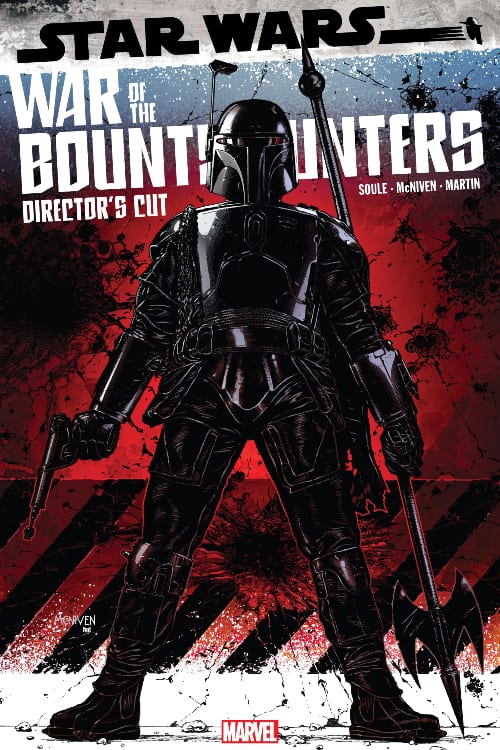 How did Knull make his way to Star Wars?! (Image: Star Wars: War of the Bounty Hunters Alpha, Marvel Comics)

Don’t worry, Marvel’s recently concluded and convoluted King in Black event hasn’t crossed over to Star Wars. This awesome look happens because Boba Fett, even in standard Mandalorian armor, is still too recognizable. So he uses a temporary nano-paint to cover it in a symbiote-looking black. This is going to be one of those iconic looks that only happens once, or maybe a couple more times, but we’ll see Funko Pops and deluxe action figures for it anyway. Kind of like Spider-Man’s Spider-Armor Mk 1 suit.

But Fett does something that makes this more than a cool costume change. When he enters the competition, he introduces himself as Jango – his father’s name. Even though Jango wore blue and silver, this is a fitting tribute, as his father’s death led to some pretty dark times. It also reflects Boba’s change from the happy kid in Attack of the Clones to the bitter bounty hunter we meet in War of the Bounty Hunters: Alpha. However, it gets a little deeper than that. 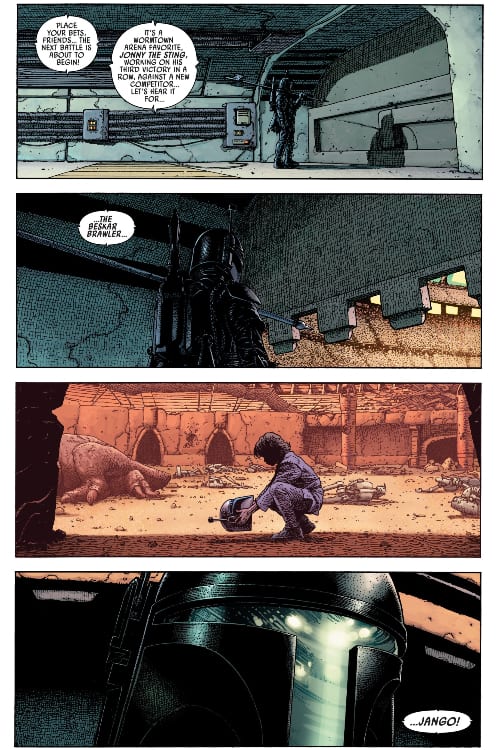 Oh great. Bring back one of the top ten saddest scenes from the franchise. Thanks, Soule. (Image: Star Wars: War of the Bounty Hunters Alpha Director’s Cut, Marvel Comics)

The page above represents the best work of the entire creative team. Charles Soule’s writing, Steve McNiven’s art, Laura Martin’s colors, and even Travis Lanham’s lettering. Let’s go back to Attack of the Clones’ third act – the battle on Genosha. Jedi and Droids battling it out, three massive creatures attacking without prejudice, and Jango Fett kicking ass. But then Jango gets into a duel with Mace Windu, who swiftly decapitates the skilled bounty hunter and moves on.

The middle image here is a flashback to when we saw Boba Fett pick up his father’s head (still in the helmet). That’s what an arena means to Boba – his father’s death. So, when he enters the arena, of course he’s immediately going to flashback to that horrifying moment of his childhood. The worst day of his life. It’s one page, and it’s more moving than most comics you’ll read this year.

War of the Bounty Hunters: Alpha is a great setup for a massive event. And now there’s only a mere thirty-three parts left!