Clash of the Legends 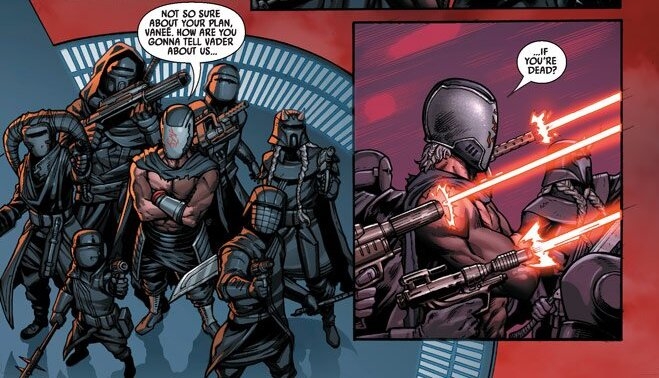 The original trilogy and sequel series of Star Wars came to a head in the newest edition of the Star Wars comic. The Knights of Ren came up against the almighty force of Darth Vader. You might think they’d be on the same side, but not this time. In a surprising turn of events, it was actually the Knights of Ren who gained a victory in this fight. You can catch the full fight in Star Wars: Crimson Reign issue 4, which came out today.

Earlier, the Knights of Ren journeyed to the volcanic planet of Mustafar to try and dominate over the Sith. Qi’ra gave them this information. You might know her from Solo: A Star Wars Story, where she played Han Solo’s first love interest. She has played an important role in this Star Wars comic spinoff.

The Knights of Ren are looking for a secret key, which they believe is inside Darth Vader’s castle. That’s certainly not a journey that any of us would take lightheartedly! However, their trip went along a lot easier than expected. Surprisingly, any defenses to the castle are pretty minimal. The Knights of Ren take the key and begin to leave the deadly castle behind. 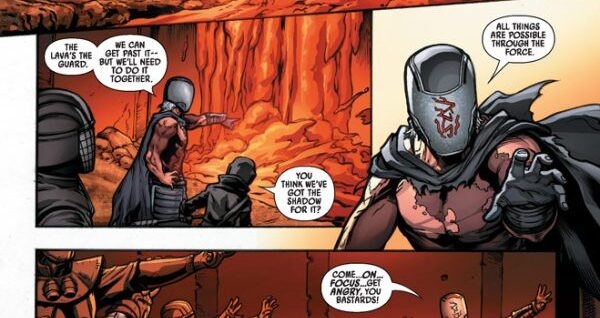 Suddenly, Darth Vader appears out of nowhere and is keen to stop them from leaving. Darth Vader uses his force choking powers on the Knights without saying a few words. Before any of them can react, Vader kills one of the Knight of Ren. Angered, Kylo Ren fights back against Vader with his lightsaber. A fearsome fight then starts between the two of them, a first for the Star Wars comic.

As you might expect, Vader is able to strike against Ren with a lightsaber to the side quickly. However, Kylo Ren has a trick up his sleeve and jumps through the window. Clearly, he knows when there’s a greater enemy and decides to flee the scene. The other Knights follow suit after him, and it seems like the end for the Star Wars comic.

Then, Kylo stops running to tease Vader, telling him that the Knights have managed to snatch the key. So, Vader attempts to use his Force powers to claim the key back from Kylo Ren. He gets very close to his goal. However, it turns out this was all part of Ren’s ruse. The Knights of Ren turn their weapons on Vader and shoot at him.

Finally, Vader is forced to fight against the Knights of Ren. He is too distracted to focus solely on the key, and Kylo Ren is able to flee the scene. The remaining Knights soon follow him, happy in their seeming victory over the Dark Lord. One of the last scenes of the Star Wars comic is of Vader’s fury at being bested.

What’s Next for the Star Wars Comic? 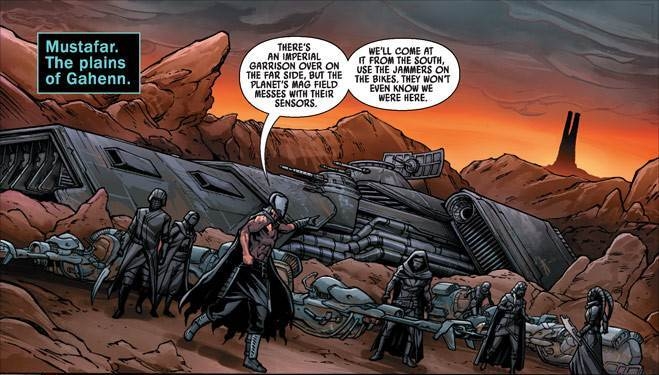 However, it seems like it might be too early for the Knights to start celebrating. The cover for issue 5 of Crimson Reign features Darth Vader. So, we know he’s not out of the picture yet! In fact, the next issue will include Qi’ra “learn a lesson that the Jedi Order also came to understand. Underestimate Emperor Palpatine and pay the price.”

We can guess that this isn’t the last we’ll see of Darth Vader in the Star Wars comic. If you’d like to catch up on Crimson Reign, you can pick up issue 5 now from Marvel.

Marvel
Who is Wong in Marvel Comics?
Marvel
Who Is América Chávez, The Interdimensional Traveler?
Marvel
Who is Gorr the God Butcher? Meet the Villain of Thor: Love and Thunder
Marvel
May 11th Marvel Comics: New Moon Knight, and Miles Morales is GREEN!
Marvel
Agatha Harkness Spin-Off Series—Elizabeth Olsen Comments On Possible Role On The Show
Marvel
Doctor Strange 2: Who was that in the mid-credit scene?