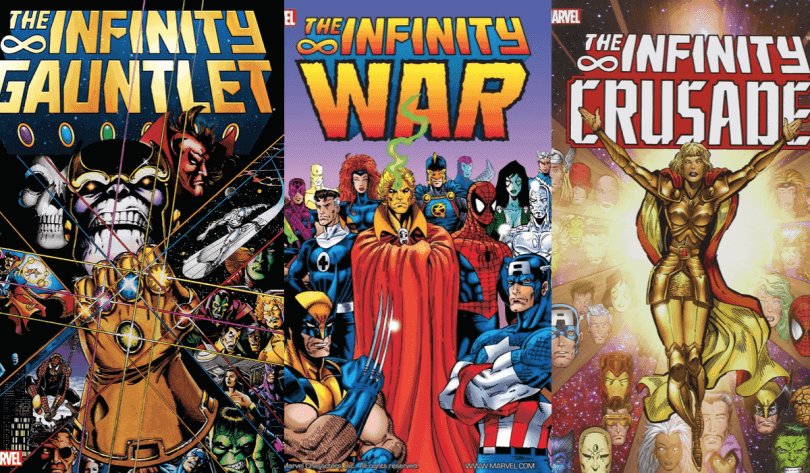 Avengers: Endgame is making more money than most films ever. The Marvel Cinematic Universe has likely come to a crossroads. With many changes, what comes next? Well, some Marvel movies are still to come out this year. There are still a lot of stories the movies could tell. To hold you over, consider revisiting the comics that started it all. That’s right, The Infinity Saga tells a different story. If you haven’t seen the source material, now seems like a great time. In the Infinity Saga, things are on a much greater scale, and they are sure to keep you entertained. Let’s fight the Endgame blues and talk about revisiting the Infinity Saga comic books. First, why the changes in the movies?

Why is the Infinity Saga Different in the Movies?

The Upcoming Marvel movies in the MCU and the Infinity Saga comic books tie in is a little different than the comics that inspired it. For one, the companies in charge of the Marvel Cinematic Universe are only able, at the moment, to use certain characters in the Infinity Saga comic books. For a long time, Sony held Spider-Man as its own intellectual property. Now, Disney is able to use it for their movies. That has led to fan-favorite Tom Holland donning the red and blue spider suit.

Additionally, X-Men are under the control of Fox. Fox recently became property of Disney, who owns Marvel and the rights to Spider-Man in movies. Fans note, however, that Into the Spider-Verse was a Sony Animation film. Nevertheless, the web slinger is a big part of the MCU. As the merger finalized, many fans wondered if X-Men would enter the Marvel Cinematic Universe. It seems possible, and would certainly match up more closely with the comic books.

The films have without a doubt boosted the Infinity War saga comic books into a new level of popularity. For example, the way that fans have grabbed onto Thanos is incredible. Many see him as the peak villain in the Marvel Universe and Infinity Saga comic books. Sure, he’s evil, but many enjoy his logic. A campaign called Thanos Did Nothing Wrong even came out after Avengers: Infinity War.

We’re not going to comment on the villain’s wish for half of the universe’s living things to die. What we will say is the casting for Thanos was spot on. Josh Brolin does a great job playing Thanos, bringing emotion to the character. The comic books portray Thanos as a completive entity. He’s very aware of the damage he wants to cause.

A lot of online commenters have asked this very question: is Thanos a villain or antihero? In truth, the film leaves little room for interpretation. The comics, however, show a man who transforms over time. That story is left out of the films. We don’t know if Thanos will return to the MCU, but we do know what the comic books have him do after he’s defeated. So what’s the best way to fight the Avengers: Endgame blues? Start reading where it all began!

When fans left the theater after Avengers: Endgame, many cried, laughed, and wished for more. Well, the popularity of the Marvel Cinematic Universe had to start somewhere. Of course, fans all over the world know the movie versions of these characters. One thing comic book fans love, however, is the way they were treated in comparison to the original stories. The plots may have been changed slightly, but overall, the characters and their influences stayed true to the comics.

It makes sense to continue where the movies got their inspiration from. The Infinity Saga comic books ran in the 1990s and stands to be one of Marvel’s biggest successes. Starting first, The Infinity Gauntlet laid the groundwork for the massive story we see take place on the screen now.

In the comics, Thanos is introduced as a villain to Captain Marvel. Given his insane power and cosmic reach, it fit well with the space-based hero. The Mad Titan is the main villain in the Infinity Gauntlet as well. The story is a bit different than what occurs in the movies, so let’s talk about the comic.

Thanos is after the affection of Mistress Death, the entity behind mortality. To attempt to buy her love, Thanos offers some pretty twisted gifts, including a near-death Nebula who is meant to be art to the Mistress. When she seems disinterested, Thanos is told that Mistress Death wants one thing: half of the living things in the Universe to vanish. That means the snap happens a bit differently in the comics. Nevertheless, half of living things disappear, and the force grabs the attention of Adam Warlock. He enters a dead body on Earth and appears before Doctor Strange to deliver the news about Thanos. The solution bring together Earth’s Mightiest Heroes to defeat Thanos. Using a variety of characters from Silver Surfer, Galactus, and even Nebula in the end, Thanos meets his match in a gripping storyline.

Unlike the movies, the Gauntlet is obtained by Adam Warlock. Unsure of his ability to hold all that power, 5 of the infinity stones are broken up and given to different people. This group is called the Infinity Watch. Thanos goes off to live a quiet life, for now. That is, until the Infinity War.

The sequel to the Infinity Gauntlet runs a bit different to the film adaptation. Adam Warlock is back at center stage when he takes possession once again of the Infinity Gauntlet. Attempting to be responsible, he removes the good and evil from him to be a totally logic-based entity. This brings to life his evil persona in the form of Magus, whose only goal is to take revenge on Warlock and Thanos. Magus has one goal: universal conquest and power over all. After the transformation, Warlock is taken before a jury to judge his character. While this is occurring, Magus collects the power to create a new realm in which clones of all of Earth’s best heroes are created, but in evil. That means copies of Wolverine, Thor, Spider-Man, and everyone are now living with evil doppelgängers in the universe.

Thanos, finding out about this, warns Warlock. All of Earth’s heroes decide, along with Galactus and Thanos, that the best way to move forward is to reactivate the Gauntlet and remove Magus from existence. When this is decided, panic ensues as Magus begins attacking Earth. What’s exciting about this chapter in the Infinity Saga is that there are so many characters taking part. On top of the others mentioned, Thor, Doom, Goddess, and other larger than life entities play a role. In the end, the Gauntlet is once again destroyed so it can never be used as a total unit ever again. Whatever happens in the future, it is not meant to be restored.

Of course, things don’t stay calm forever. That means, yes, the Gauntlet is brought back once more, in the Infinity Crusade.

Once again, Adam Warlock takes the Infinity Gauntlet into his power. He repeats his past mistake and removes his good and evil sides, recreating Magus and Goddess. A battle for the morality of the universe ensues. Goddess brainwashes many of the Marvel super heroes into fighting for her. The chosen ones are all seen as vulnerable to a religious or spiritual entity. That’s why Vision, Iron Man, and Mister Fantastic lead the pack. Thanos is at the top of Goddess’ hitlist, since he’s been so evil in the past. Because of his actions in the Infinity War series, Adam Warlock steps in and saves him. Realizing that Goddess is going off the deep end, Silver Surfer and Thanos start to plan a defense against her control.

Sensing the attack, Goddess attempts to use her power to eliminate all sentient life. While doing so, Thanos, Warlock, and others attack, trapping Goddess in the Soul Gem. Of all people, Thanos decides that it must be destroyed, leading to the elimination of Goddess and the chance at a fully functioning Gauntlet ever again. This entry in the series is the final in the original Infinity Saga that inspired the films.

As you can see, the films take a much different approach to this story. At no point in the movies is Thanos good. The comics, however, show him finding his way to a lighter side of the hero spectrum. The comics and movies are both great. Comic fans might favor the books, but the Marvel Cinematic Universe is a spectacle. If you have not seen Endgame or other films in the Infinity Saga, go as soon as possible. Spoilers are spilling out everywhere online! If you have seen it, consider reading the original Infinity Saga comic books. All comics are available physically in collections, as well as online. If you’re lucky, you can find a few original copies of the issues at your local comic book shop! Happy reading!