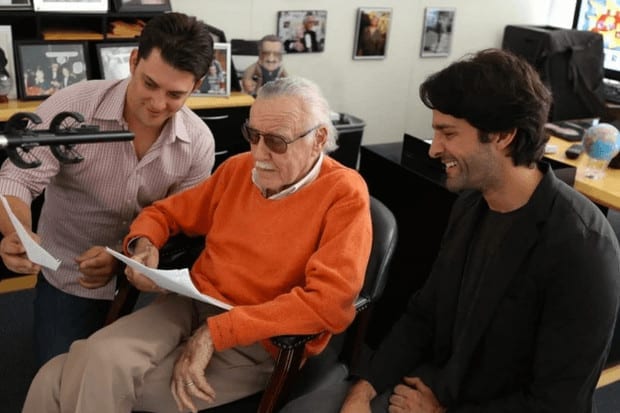 Lately, Marvel is on a roll. For starters, Avengers: Endgame is set to be the top grossing movie worldwide of all time. That means yes, Thor, Captain American, and company are going to dethrone Avatar as earning the most money ever. Not to mention, Spider-Man: Far From Home presented a trailer this week that had fans excited. Now, with Phase Four of the Marvel Cinematic Universe ahead, it looks like Spider-Man is center stage. Plus, a lot of great Marvel comics are set to release this Spring and Summer. What a time to be a Marvel fan! It’s nice to focus on the positive, because last year was a little rough with the death of Marvel creator Stan Lee. Coming soon, his new series is Stan Lee’s Alliances audiobook, titled A Trick of Light.

Stan Lee’s Alliances audiobook follows his death that shakes the comic book community to this day. Why wouldn’t it: he’s the mind behind many iconic characters. As we all know, Marvel fans love Fantastic Four, Spider-Man, and X-Men because of Stan Lee’s dedication to the craft. Now, Endgame features his last cameo and the man continues to grow in legend. Luckily, one last creation is set to take off and hit audiences at the right time. Stan Lee’s Alliances: A Trick of Light is the next entry in the creator’s vast library of art.

What is Stan Lee’s Alliances Audiobook About?

Comic book fans and movie audiences know Lee for his characters on screen and page, but what about as an audiobook? That’s how the new series is coming to fans. On June 27th, Stan Lee’s final creation will release as an audio drama, not unlike the radio shows that inspired Lee in his youth. According to reports, the show is set to take place in a universe of its own, featuring dozens of characters and new adventure.

“We’re delighted to bring this epic story to global audiences and introduce listeners to a brand new Stan Lee universe,” said David Blum, Editor-in-Chief, Audible Originals. “This amazing adventure forged from the imagination of the legendary Stan Lee is not only extraordinarily entertaining but is profoundly insightful about modern technology and its resulting challenges. Listeners and fans will love and relate to this story.”

What are Show Creators Saying?

The series is meant to introduce tons of new characters into the mix. That means a lot more content that’s fresh, which is nice given the amount of times we have seen some of our favorite superheroes. Co-creators Luke Lieberman and Ryan Silbert commented, “Stan had the uncanny ability to see around the corner and recognize the cultural moment, then create story and characters that beg the deeper questions. Stan Lee’s Alliances: A Trick of Light follows in this tradition.” It’s sure to be a series full of mystery, and listening to it all play out will make the suspension even stronger. Let’s take time now to talk about the team behind the new Marvel series.

Who is behind Stan Lee’s Alliances: A Trick of Light

The team behind the new Stan Lee creation is well known to Marvel Fans. First up, the universe was partly created by Ryan Silbert and frequent Lee collaborator Luke Lieberman. Lieberman is a mind that went into the work for 2000’s X-Men movie> Lieberman also started his career at Stan Lee’s company “POW! Entertainment.” Co-written by Kat Rosenfield, A Trick of Light centers on a young woman with a mysterious past, present, and future.

The Story of A Trick of Light

Nia is the character at the heart of Stan Lee’s Alliances: A Trick of Light. To start, she comes across Cameron Ackerson, a teen from the Midwest looking to make it big as a YouTube sensation. Cameron made the trip to the Great Lakes triangle for a career boost, but he finds something much different. Cameron suddenly can see and hear a new reality. With Nia’s help, Cameron hopes to use this power to make a more righteous online experience. As we all know, internet comments can be a tough place for creatives online.

While trying to make the internet a better place, Nia and Cameron end up in the crosshairs of OPTIC. This organization is a dangerous, shadowy group that poses a threat to Nia, Cameron, and the world. OPTIC hunts them as soon as they become aware of Cameron’s power, and while all of this is happening, something bigger than them all occurs. Above Earth, a galactic threat emerges that could end everyone in a heartbeat.

The Idea Behind Stan Lee’s Alliances: A Trick of Light

Interestingly enough, Stan Lee’s Alliances: A Trick of Light takes a different approach to the hero story. For one, the main character with powers, Cameron, wants to be a YouTube star. When Stan Lee began writing comics, the internet was not even an entity. That plays a role in this new story. Many of Lee’s ideas start with some sort of scientific accident as a means to achieve new powers. The Fantastic Four come into contact with radiation. Spider-Man is bit by a radioactive spider. You see the trend?

In Stan Lee’s Alliances: A Trick of Light, purposeful inventions are the technology that makes Cameron obtain powers. Unlike some superhuman entity giving abilities, this story looks to modernize the way we think of heroes. It should be a really great way to experience one last taste of Stan Lee talent.

How to Listen to Stan Lee’s Alliances: A Trick of Light

A Trick of Light looks to be the first in a series of Marvel audio stories on publisher Audible. Audible is, up until now, an audiobook subscription service. Owned by Amazon, subscribers get two audiobooks a month, plus discounts and deals on other books. This is not the first company to host a Marvel-produced audio drama. Stitcher, a podcast conglomerate, ran the series “Wolverine: The Lost Trail,” which is coming up on a second season. Much like Stitcher, Audible seems to be moving into comic book audio series. It could mean really great stuff for the company, especially when it comes to converting comic book fans to the audio format. The series begins June 27th. If you liked this post, check out our post on Dark Phoenix history!

Infinity Saga Comic Books: Great Read After Endgame
Wolverine vs Blade – The Match-Up We’ve All Been Waiting For