DC Future State Week One Has Some Big Surprises and a Dud. (spoilers!) 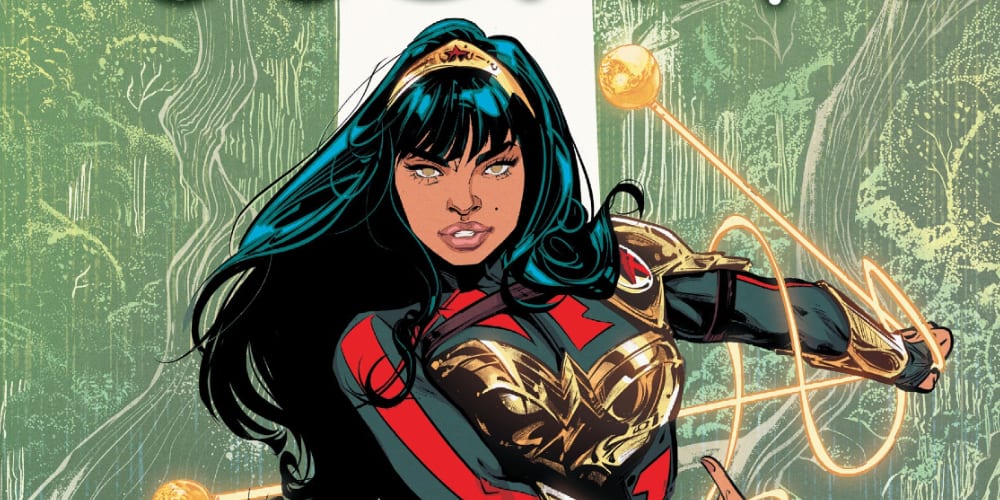 Despite only having two comics, the Gotham stories of DC Future State week one took up a lot of word estate. There might have been two physical copies, but there was a total of four different stories. The rest of Week One is slightly similar. We do have one anthology issue and then three regular issues, giving us six different stories. However, having slightly more stories isn’t the only difference from the Gotham side. Unfortunately, the quality is a bit sporadic. Some stories are great. Some are okay. And one is just terrible. So, let’s take a look at DC Future State Week One.

Superman of Metropolis, The Other Big DC Future State Title in Week One 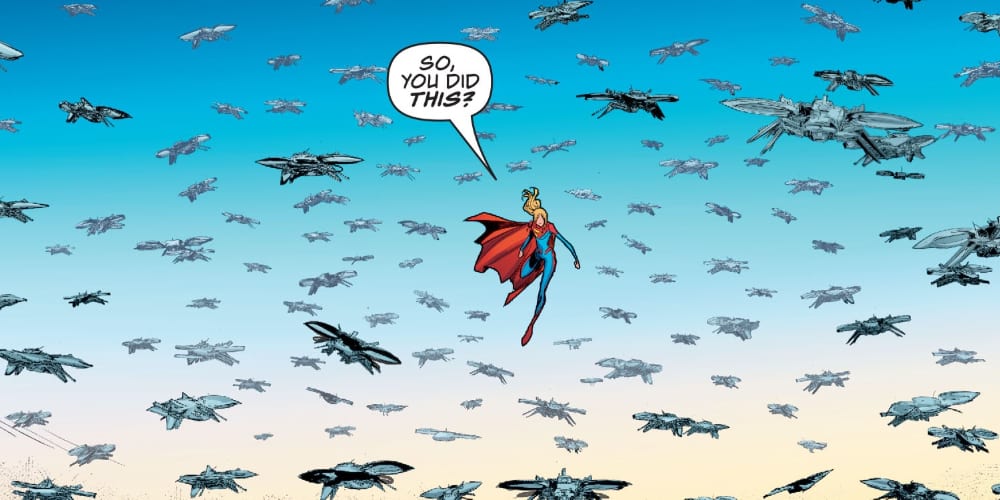 Don’t look at me; I was in Gotham. (Image: Future State: Superman of Metropolis #1, DC Comics)

On the Gotham side, we had The Next Batman for the anthology issue. And all three stories in it were pretty good. The other anthology for week one of DC Future State is Superman of Metropolis. How does it hold up to Next Batman? Pretty well. There are a lot of parallels between the two series. Both cities are under abusive control. Both have heroes within and outside, trying to save them. And both feature a successor to the original superhero. In this case, instead of Clark Kent, we have his son.

Jonathan Kent, The Superman of Metropolis 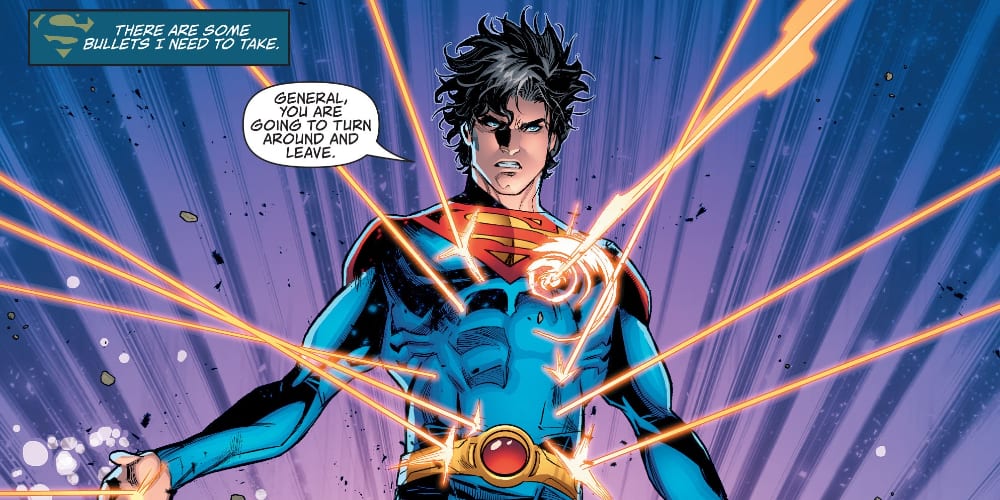 The first story in The Superman of Metropolis tiptoes around a Shakespearean tragedy. It’s about a hero whose ambition to protect his city goes too far. There’s nanotechnology infecting the people of Metropolis, made from the skin of a dead Brainiac. As more people fall victim to the “brain cells,” the more unstable Metropolis becomes—to the point that the US Military shows up. And Superman—formerly Superboy—isn’t having it.

But Jonathan’s plan is horrifying. Instead of protecting the city like his father once did, one resident at a time, one threat at a time, he, well…Kandor-izes Metropolis. That is, he shrinks it down and puts it in a glass dome. His ambition fell victim to the entity controlling the brain cells, which reminds him of all the wars he fought. We’ll come back to that. Essentially, what Brain Cells did was trick Superboy into becoming the villain of his own story. And though the US Military and Supergirl try to save Metropolis, he’s already done too much damage. And Brain Cells already has control of the city. Ironically, Jonathan imprisoned an entire city because he was afraid of Metropolis turning into Gotham. Cue Curb Your Enthusiasm music.

here is one major clue (or maybe more) when Brain Cells talks about Jonathan’s “wars.” One of these conflicts involved the “Golden Gods of Creation.” If you read Dark Nights” Death Metal #7, you know that the Creators played a major role in the new landscape of the DC Universe. You also know that Wonder Woman, who coated herself in the golden metal of creation, ascended to their levels. And that she killed The Batman Who Laughs. Now, take a look at the center image here: 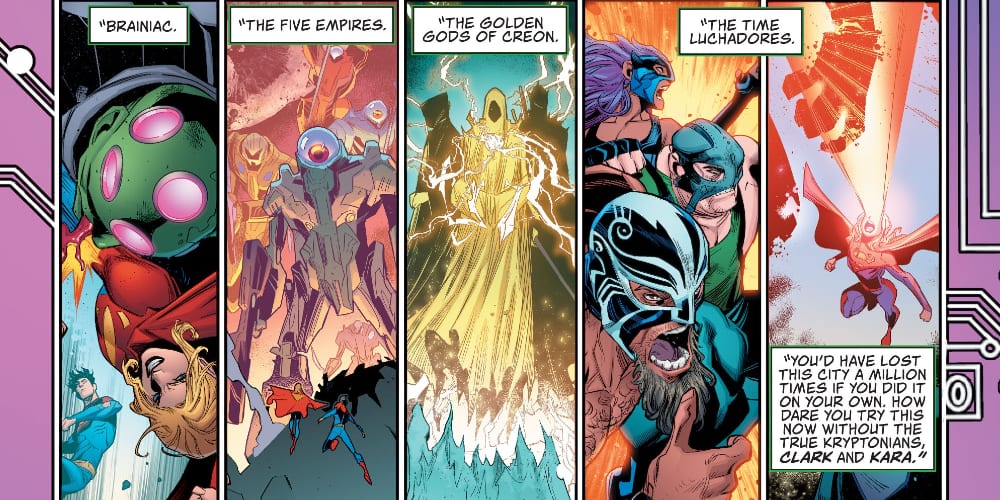 Out of all them, the Time Luchadores are obviously the biggest threat. (Image: Future State: Superman of Metropolis #1, DC Comics)

First, one is very much golden and wears a robe and hood similar to one Wonder Woman wears often. But also look to the one on the right, behind maybe-Wonder Woman. Look at the spikes on the silhouette, especially around the head. Um…is that the Batman Who Laughs? Because if it is, and he and Wonder Woman are gods of creation who go to war with our heroes, we need that story now! 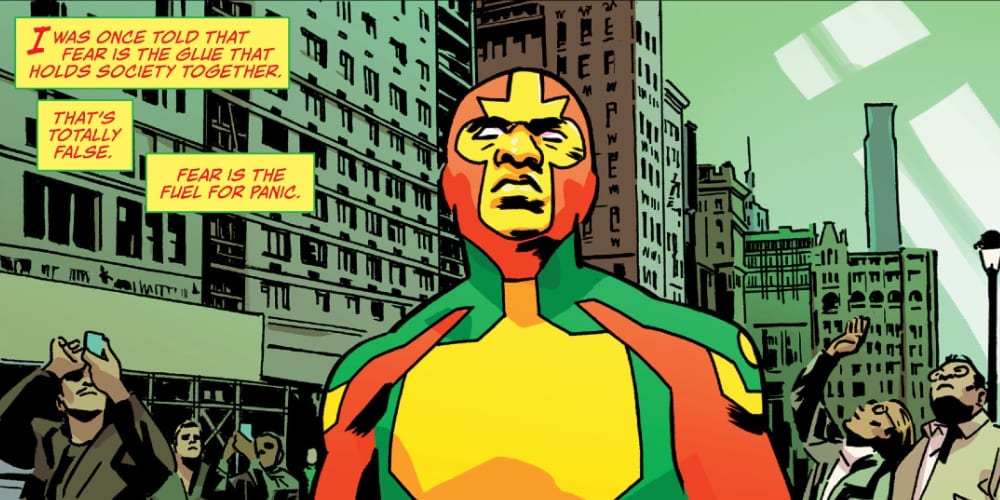 Batman and Superman aren’t the only heroes with successors. Nor is Batman the only character with a Black successor. Meet Shilo Norman, our new Mister Miracle, and hero of Metropolis! And stuck inside a glass dome. This is a fascinating story because we already know what happened—but the people of Metropolis, so far, don’t. It’s an inversed mystery. But what Jonathan Kent isn’t aware of is what’s happening inside the dome. Something is attacking Metropolis that has the same energy as the dome itself. No one, right now, would ever imagine that Superman did this to them. We know where this is headed—we know that Shilo will find out it was Superman. And it’s going to be hard to watch.

This was my favorite of the DC Future State Week One stories. Maybe even more than Arkham Knights. I’m looking forward to learning more about Shilo. 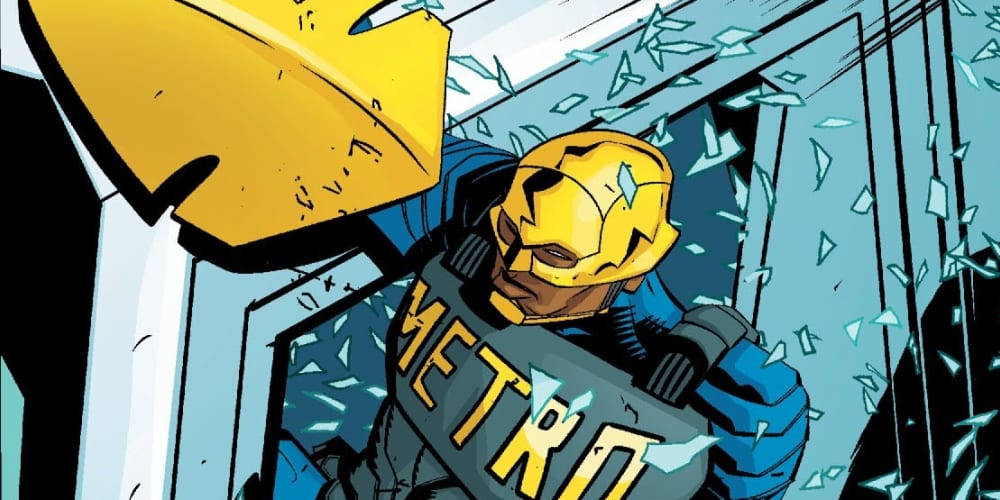 In Generations Shattered #1, we got Doctor Light’s return, a pretty minor character in the DC Universe. But in Superman of Metropolis #1, we got the return of a really obscure character: The Guardian. The Guardian is one of those characters who should be 100 times more popular than he is. Originally, he was the Manhattan Guardian, but he decided to move to Metropolis…because he wanted a “normal life.” With Superman around, who needed a Guardian. And then Superman put everyone in a snow globe, so the Guardian is back in business. At six months in, everyone in Metropolis knows what happened, and it’s not going very well. Especially when a new threat pops up. Metropolis might be small now, but it still has some big problems.

But aside from the story, there’s a great little bit of captions that speaks volumes for the importance of Black, or simply Non-White, superheroes. Why did Malcolm Duncan become the Guardian? Partly because other heroes inspired him. He tells us:

“I’d hang over the side of my couch staring upside down at my television. And I’d see Black Lightning and Steel. Heroes who looked like me. The had S.T.A.R. Labs, where the brightest minds were turning sci-fi magazines into everyday realities. I’d look at Metropolis and think if I could get close to that amazingness, I could be amazing too.”

Ugh. Heartstrings, consider thyselves pulled. The sad thing is, the Guardian doesn’t consider himself amazing, but he really is. When we meet him, he’s hijacking an ambulance rigged with explosives and trying to get it away from citizens before it blows up. That’s amazing.

Wonder Woman, the Other Successor in DC Future State Week One 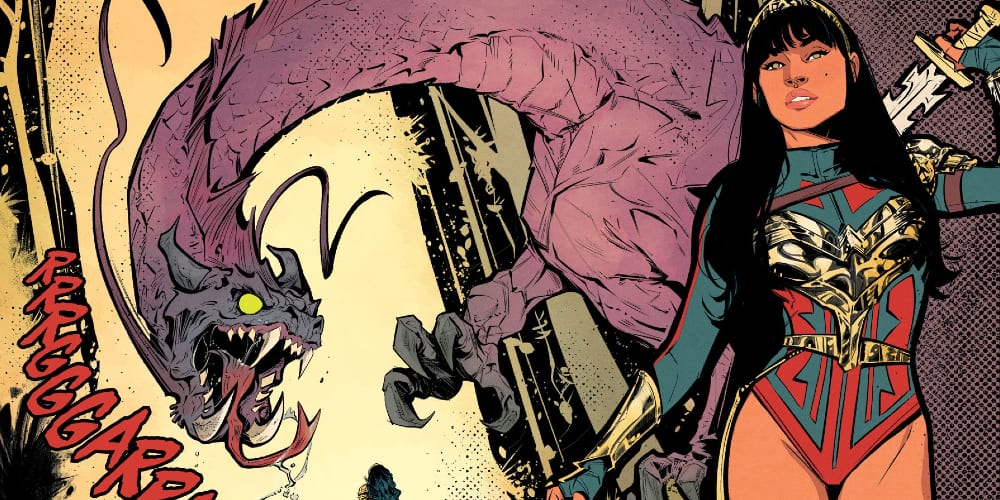 …Yeah, I might be in love. When’s the next flight to Brazil? (Image: Future State: Wonder Woman #1, DC Comics)

It seems that Week One of DC Future State is all about successors to our big-time heroes. As such, we have a new Wonder Woman—a new Amazonian who is from the Amazon, Yara Flor. Future State: Wonder Woman #1 is a standard-length comic, but it should have been longer. The writing and art were good, but it doesn’t feel like it goes anywhere. We don’t learn enough about Yara, and she’s a little overshadowed by more interesting characters, like the forest goddess Caipora. The comic is a lot of fun, however. We have an underworld that’s more like an airport terminal and just as frustrating, a fight with a hydra, and Yara trying to sneak her way into the underworld. But it just needed more story and a better lead into the next issue.

However, we do get Jerry, the lazy Pegasus. He’s my new hero.

Swamp Thing, the Most Distant Future in DC Future State Week One 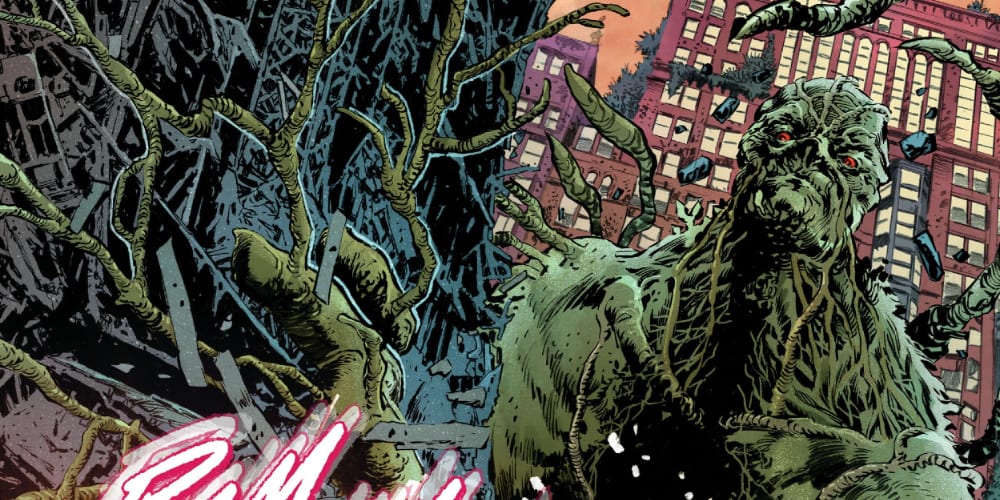 The very first image we see in Future State: Swamp Thing immediately reminds us of Alan Moore’s seminal Swamp Thing run from the 1980s. In fact, Ram V and Mike Perkins channel a lot of Alan Moore in this story. They also embrace the idea of Future State much more than any of the other DC stories in Week One. This is the “end of the world, hundreds of years after the apocalypse” future. There hasn’t been any sign of humankind in decades, but Swamp Thing keeps looking for them.

Being so far removed from the other Future State eras creates a slight problem for Swamp Thing #1. It relies heavily on exposition. Swamp Thing has a Swamp Family, and they’ve been living in the ruins of New York City for a long time. All of this—and later parts of the comic—requires a backstory. However, this should make the next issue a bit smoother. There’s a deep mystery here, one that could lead to more answers about the future state of DC; remember, we’re only in week one.

Also, the art is beautiful here. That alone is a good reason to keep reading.

The Future of the Flash Family Falls Flat On Their Faces 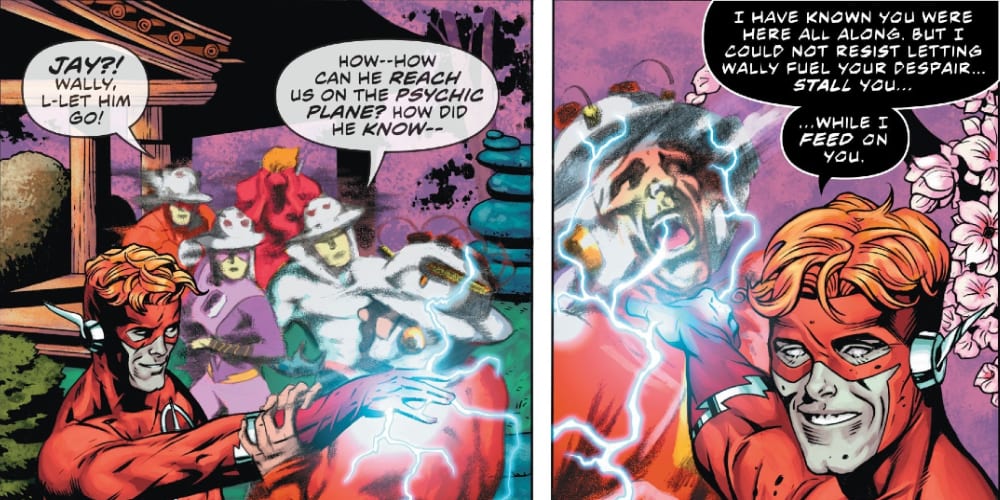 Ugh. Do we need an “Evil Wally” Jar? Like a “swear jar,” but instead of putting in a dollar when you say $^@*, you put one in when you turn Wally evil. (Image: Future State: The Flash #1, DC Comics)

What do the DC editors have against Wally West? He just went through a major character arch, from killing some of his best friends to seeking redemption, claiming the Moebius Chair, and finally becoming a hero again. But what do we learn in DC Future State Week One? He’s possessed, again, and killing—again. He Killed his cousin, Wallace West, AKA Kid Flash. He stole the Speed Force from the rest of the Flash Family. And he’s going around the world, killing more and more people. Apparently, he’s possessed by the Apocalyptic Horseman Famine. But come on, evil Wally? Why are we back here?

Aside from that, we have a few more clues to what happens in the future. Checkmate, for instance, is deploying teams to different Earths. But before we know why, the Flash Family attacks them. They’re stealing tech that they think can save Wally. But by the end of the issue, Jay and Bart also die. And Barry switches from “save Wally” to “kill Wally.” Just…why? All the other stories in DC Future State Week One felt like natural progressions for their titles. But not The Flash. Maybe the next issue will be better, but I don’t see how it can be if this is the plot.

And on that happy note, we’ll (probably) be back for Week Two of DC Future State, even if it took three posts to cover Week One. Overall, between the leadup, the Gotham stories, and these, it’s mostly a success—especially for an event on this scale. Now, will it build momentum or become a slog? We’ll know…IN THE FUTURE! Get it?

Nightcrawler Leads a New Team in the Way of X!
First Studio Ghibli CG Movie Earwig And The Witch To Stream Exclusively On HBO Max