The Kitchen is a Well-Baked Crime Drama - Comic Years

Home » Movies » The Kitchen is a Well-Baked Crime Drama

The Kitchen is a Well-Baked Crime Drama

The current Rotten Tomato score for The Kitchen (Based on a Vertigo comic), the crime drama featuring Melissa McCarthy, Tiffany Haddish, and Elisabeth Moss, is a painful 20%. But here’s the problem, there are quite a few reviews with comments like this:

The Kitchen is a female empowerment movie disguised as a mob movie. With a message as dumb as “women can kill people too,” this will make you want to leave the gun, leave the cannoli and leave the theater.

So, here’s the problem with this review. It’s blatantly sexist. And the message isn’t “a woman can kill people too.” No reviewer could really be that dumb. The message is to do everything you can to get ahead. And yes, women can do that too. Also revealed in this comment is that the reviewer wants his manly mob movies, and references The Godfather as if to gain credibly. But he also doesn’t understand The Godfather if his assessment is that mob movies are about killing people. Godfather is a movie about protecting your family, the mafia aspects of it derive from a time when many Italian-Americans saw little choice other than to work with the mafia to stay safe. He fails to recognize the true meaning in either of these movies. Violence is a byproduct of circumstance, not a driving force for action. If you can comprehend that, you’ll enjoy the movie—like most of the people who were in my sold-out theater.

The Women Belong in The Kitchen 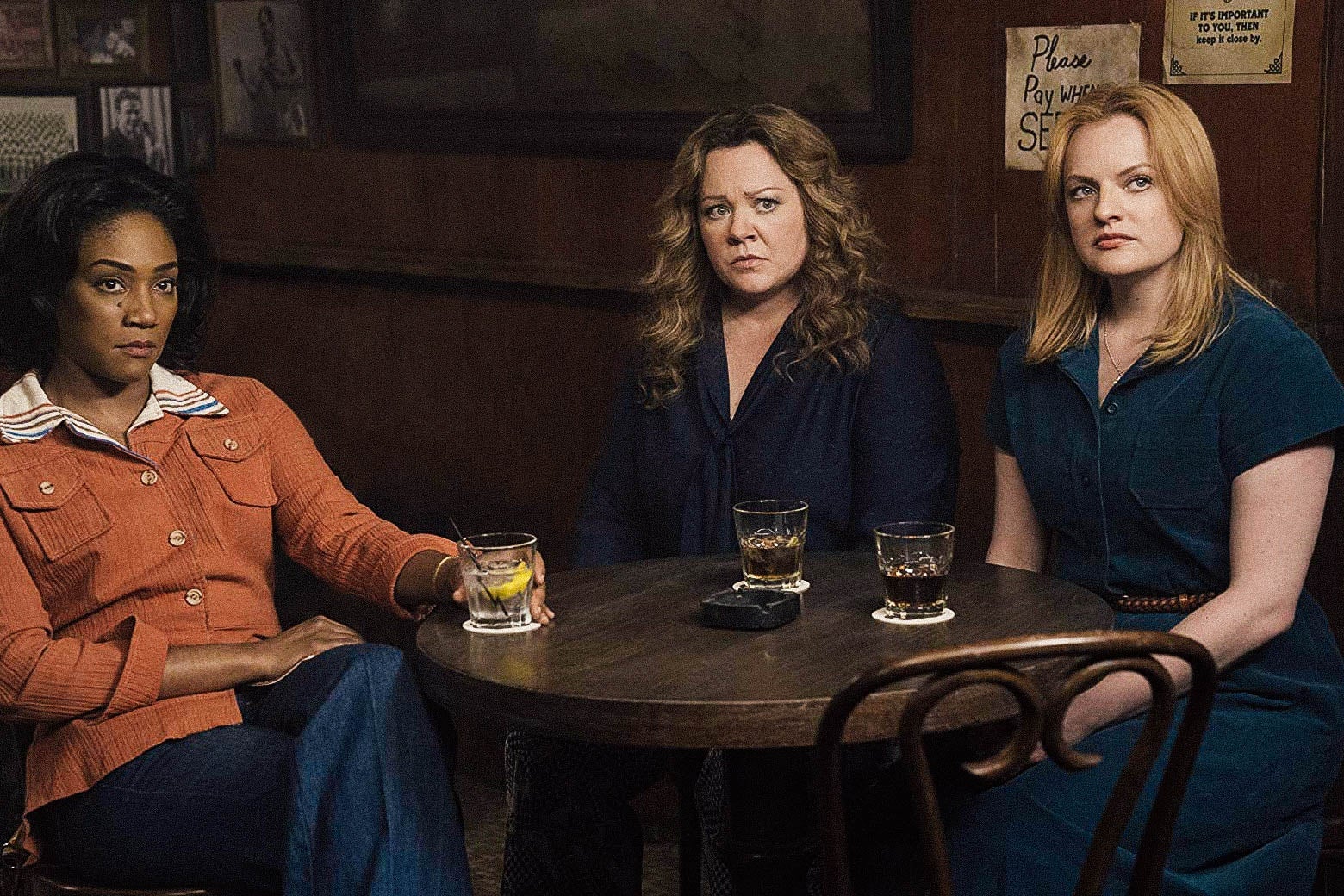 They won’t hit you with a spatula…but they will put a hit out on you. (Warner Bros.)

First, the three leads are great. Elisabeth Moss has played a few serious roles. She won an Emmy for The Handmaid’s Tale, which is no comedy. Melissa McCarthy mostly does comedies, but she’s showed her serious side a few times, such as her Oscar-nominated role in Can You Ever Forgive Me. Both of those actresses have already proven what they can do. However, it’s Tiffany Haddish who had the most to gain here. In most of her roles, she’s a loud and energetic party girl. She’s played low key too, see her turn in Night School, but she hasn’t shined through as a serious actress yet. Her role in The Kitchen changes that. She is good, commanding, and sometimes a bit frightening. The only problem is that she is clearly excited about this role, and it once or twice it makes her performance feel forced, but not so much that it doesn’t show that she has a promising future in drama.

A New York Minute of Hell

The Kitchen goes fast. It has a short one hour and forty-minute runtime. Honestly, it could have used about 20 more minutes, but the pace helped it too. It’s chaotic and frantic, and it makes everything feel more unpredictable and dangerous. Most crime dramas take their time and show how the mobsters slowly build their empire. These women don’t have time. Their husbands are in jail for three years, and they want to establish their control before they get out. They waste no time moving in on the new leaders of the Irish mob, and do so swiftly, the war is over before the men even realize it’s begun. And then they just keep running forward, building faster and faster, and more and more brutal as they go along. The film matches the pace of the comics in this way. Even though the audience wants more time with the characters, they don’t have it to spare. 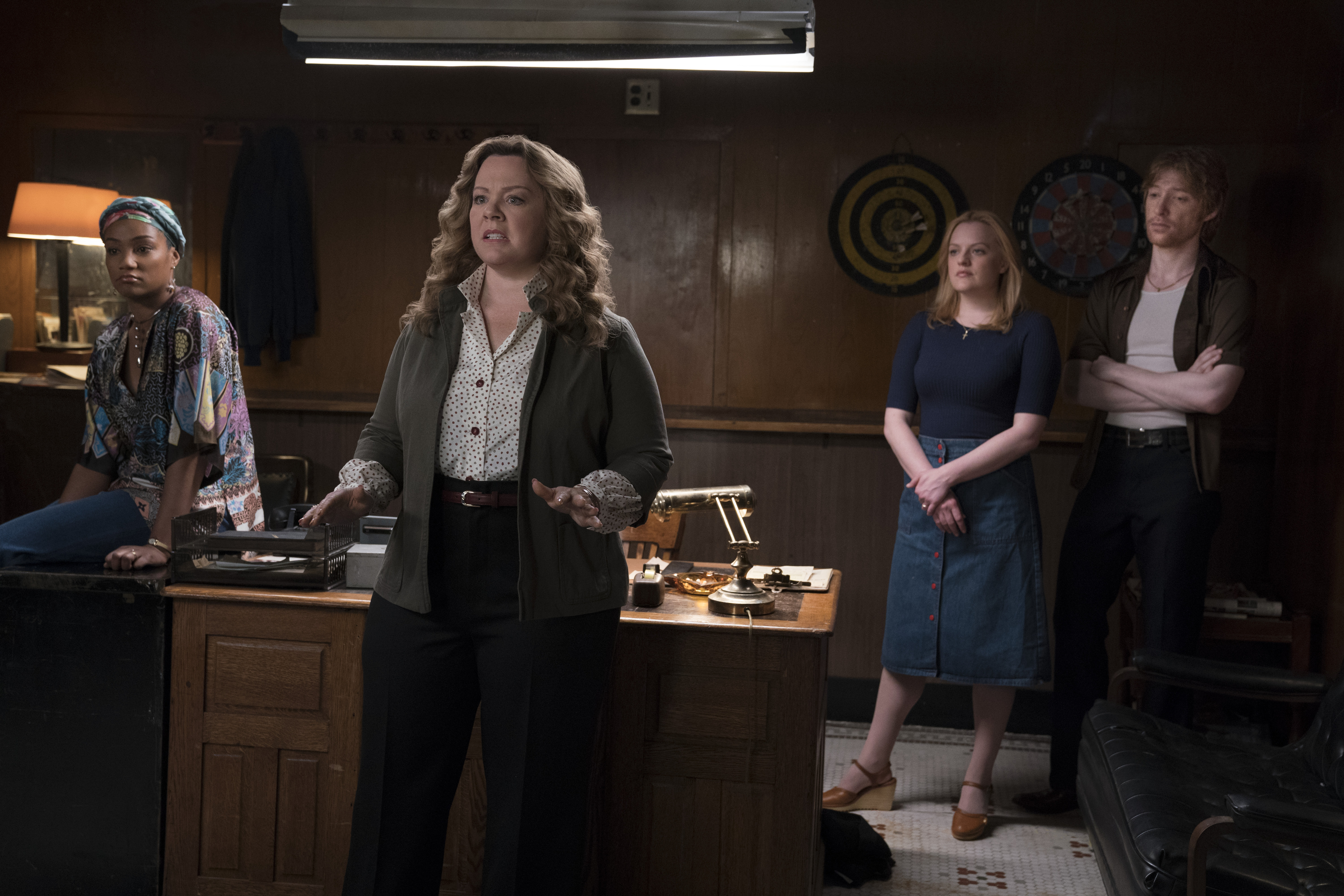 Just waiting patiently in the background to kill someone. Carry on. (Warner Bros.)

The only guy worth mentioning in The Kitchen is Gleeson. Gleeson plays the three women’s enforcer. He’s a damaged Vietnam veteran who’s become a bit of a sociopath. It just happens that he’s in love with Elisabeth Moss’s character—if it weren’t for that, this character would be their worst nightmare. Gleeson plays this role quiet, which makes it that much more menacing. This element combines two characters from the comics into a brand new one.

One thing clear in The Kitchen is that Andrea Berloff loves 70’s films. From the opening credits to the cinematography and wardrobes and dialogue. It makes the movie a lot of fun. It also feels right. It’s kind of annoying when directors reference cinematic periods when it doesn’t fit the movie. Sure, Quentin Tarantino has some great films, but half of his 70’s references are out of place with the stories he tells. The Kitchen doesn’t have that problem.

Is it a perfect movie? No. But it’s fun and McCarthy, Haddish, and Moss are great to watch.

Grade: The fancy kind of mac and cheese.