Taika, who saved Thor, Will Win Our Hearts Playing…Hitler? 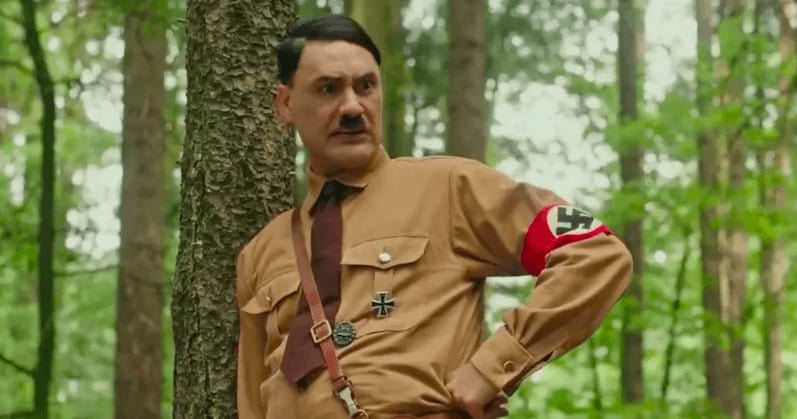 Two decades ago, New Zealand gave us a gift: Peter Jackson, whose Lord of the Rings trilogy would take the world like a thunder battle in the Misty Mountains. But that’s not the only gift the small nation had in store for us, for it would soon give us an even better treat: director Taika Waititi (and this is coming from someone who is going to soon have Lord of the Rings tattoos). Most people had no idea who Waititi was in October 2017, but by November 2017, with his superhero directorial debut Thor: Ragnarok, everyone wanted more Waititi. And by the grace of the one-eyed Allfather, we’re going to get a lot more of him. But, like many directors, he’s been around for a while before he became a star, and his early career shouldn’t go unnoticed.

In the Beginning, there was Boy

Waititi started acting in 1999, but if you recognize his face from a movie, it is sadly from Green Lantern where he played Hal Jordan’s friend. The less said about that, the better. His directorial debut was a bit before that, with 2007’s oddball comedy Eagle vs Shark. When it came out, the film was unfairly compared to Napoleon Dynamite for its similar dry wit and strangeness. Truly, though, Eagle vs Shark is a better film in every way. We see two awkward people falling in love, and it helps that Waititi is a bit awkward himself.

The first Taika Waititi film to win critical acclaim was a sweet coming-of-age comedy called Boy (2010). Boy follows a young man nicknamed “boy,” who is obsessed with Michael Jackson, and living in a poor rural town on the east coast of New Zealand. Boy, like many sons, idolizes his father and often makes up stories of him doing incredible things to make up for the fact that he’s been in jail for seven years. And like most coming-of-age stories, Boy learns that the world is not as magical as he thought it was, and his father is not the hero he wants him to be. The movie is endearing, and one of the top-grossing films of all time, in New Zealand.  While Lord of the Rings may have shown how beautiful New Zealand landscapes are, Boy shows us a drab reality. With Waititi’s performance as boy’s irresponsible father Alamein, we get a bittersweet comedy. And a lot of this feeling we’ll see later in Thor: Ragnarok

What We Do in the Wilderness

As a director, Taika Waititi might have been well-known in his homeland New Zealand, but people all around the world started to take notice with his hit horror-comedy, What We Do in the Shadows. Taking his dry wit and irreverent comedy styles, Waititi created a memorable mockumentary about the most unmemorable vampires to ever live. They talk about things like dishes and paying the rent and cleaning their crypts. The movie quickly became a cult classic, and even inspired an FX television series that debuted earlier this year.

However, Taika Waititi shows just how powerful of a director he is with his last pre­-Thor movie, Hunt for the Wilderpeople. Like Boy, Wilderpeople is a coming-of-age comedy. Ricky, played by Julian Dennison (who would go on to be Fire Fist in Deadpool 2) is an orphan who is constantly running away from his foster parents. He gets his last shot with Hec and Bella. Hec is one of Sam Neil’s best roles in his entire career. He’s a disheartened old man who doesn’t want anything to do with Ricky, and even when Bella dies early in the film, can’t wait for Ricky to go back to child services. When he breaks his leg in the wilderness and has to rely on Ricky, the two become an inseparable pair—despite the entire country of New Zealand hunting for Ricky. We get plenty of odd comedic moments, but it’s also a tearjerker too.

It’s also one of the top-grossing films of all time in New Zealand. In fact, Despite that Taika Waititi was also the director of Thor: Ragnarok, the God of Thunder still couldn’t beat Wilderpeople’s hold on the top-grossing film in New Zealand. But Wilderpeople was dethroned this year by, of course, Avengers: Endgame. However, that probably happened because of Waititi’s take on Thor.

And then there was Thor. Before starting Thor: Ragnarok, Chris Hemsworth was tired of playing the alien demigod. Through his four films before it, Thor, Avengers, Thor: The Dark World, and Avengers: Age of Ultron, the character barely changed and he kind of started to feel like the Asgardian version of Captain America. But when Taika Waititi signed on as the director, everything changed. Thor’s hammer? Gone. Thor’s long hair? Gone. Thor’s stoic sense of duty? Gone. Thor’s ego? Gone. Waititi stripped Thor, both the character and the franchise down to the marrow and built something new. And what he helped accomplish made Hemsworth love playing the character again—so much so that of the original big three (him, Chris Evans, and Robert Downey Jr.), he’s the only one sticking on after Endgame, for one or possibly two movies.

But it seems that Waititi didn’t just make Hemsworth excited about the franchise again. One of the biggest surprises at the Marvel Studios panel at SDCC was that Natalie Portman, who bowed out of the MCU after The Dark World would be returning in Thor: Love and Thunder…and that we’ll see her become Thor, the Goddess of Thunder. Fans were shocked when she appeared briefly in Avengers: Endgame, but figured it was just a cameo to commemorate her role in the saga. Nope. She’s back, and like Thor, her character is going to be very different from her first two Thor films.

Before he does Thor: Love and Thunder, or gives us his Akira films, Waititi is once again giving us a small independent comedy (starring Scarlet Johannsson because, well, now he can). JoJo Rabbit’s premise and style is quintessential Waititi: A young German boy growing up during World War two conjures up an imaginary friend to help him cope with his everyday fears, and that imaginary friend just happens to be Adolf Hitler. However, according to a character description, “this is not the Adolf we know and hate, this guy is goofy, charming, and glides through life with a child-like naivety.” Charlie Chaplin turned Hitler into a buffoon in The Great Dictator, but Waititi is out to create a lovable version of the genocidal maniac.

If any director could do it, it’s Taika Waititi. Check out the trailer below:

How To Press Comic Books: A Guide To The Process
Funko Fundays 2019 Announcements And Exclusives