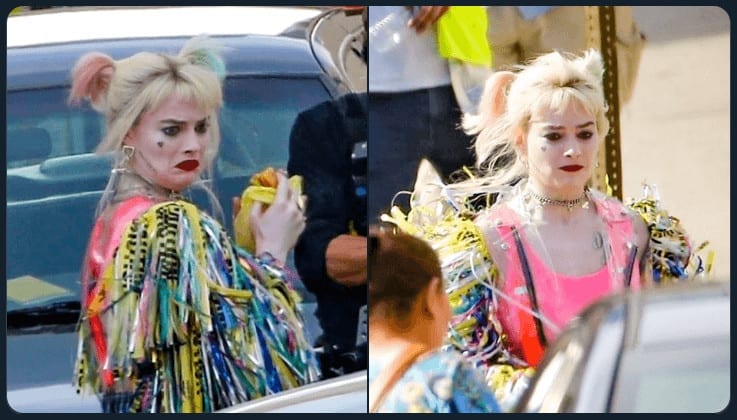 New set photos from Cathy Yan’s Birds of Prey (and the Fantabulous Emancipation of One Harley Quinn) put one of the titular characters back in the limelight. The Harley Quinn movie sees the fashionable character return to the screen. First appearing in the much-maligned Suicide Squad, Quinn remains a fan-favorite. In the images she enjoys a cheeseburger. Rosie Perez’s Renee Montoya starts her pursuit of Margot Robbie’s character.

📸 Margot Robbie & Rosie Perez on the “Birds of Prey ( and the Fantabulous Emancipation of One Harley Quinn )” set in Los Angeles on April 9, 2019. ✨ pic.twitter.com/tB0aRMqYTS

Montoya, a Gotham City detective first introduced in Batman: The Animated Series, was briefly revealed during an early teaser. The set photos are the best look at the character since. In the forefront of the behind-the-scenes images, of course, is Quinn. Donning an outfit that only the Maiden of Mischief can pull off, she causes havoc while rushing through the busy streets of Gotham City.

NEW PICS of Margot Robbie as Harley Quinn in the upcoming ‘Birds of Prey!’ pic.twitter.com/4tvS98vea0

The new Harley Quinn movie (2020) follows the Birds of Prey, a primarily female superhero team first introduced in Black Canary/Oracle: Birds of Prey #1 from 1996. After splitting with The Joker, Quinn finds herself teaming up with Black Canary (Jurnee Smollett-Bell) and Huntress (Mary Elizabeth Winstead) to protect Cassandra Cain (Ella Jay Basco). Rather than battle an ancient, demonic witch, Quinn and company are facing off against Ewan McGregor’s Black Mask. After Cain locates one of Black Mask’s diamonds, the Gotham City crime boss puts a target on her head.

A Return of THAT Batman Villain

These set photos aren’t the first to come from the Birds of Prey Movie Updates Twitter. On March 30, the account also shared images of what appeared to be The Joker and Harley Quinn splitting up. The set photos line up with a behind-the-scenes look previously shared by the official Birds of Prey Twitter. In it, the leading lady is clearly down in the dumps. The context of the reveals makes sense as their split is what sets Quinn off on her latest adventure.

📸 Margot Robbie as Harley Quinn ( + the Joker ) on the “Birds of Prey ( and the Fantabulous Emancipation of One Harley Quinn )” set in Los Angeles on March 29, 2019. ✨ pic.twitter.com/bsJAOdd9SM

While we know The Joker has at least a small part in the new Harley Quinn movie (2020), who’s portraying him is unknown. However, Leto may have teased his return with a Snapchat post of a clown emoji. Additional leaked images have showcased Black Canary, Huntress, Cassandra Cain, and Black Mask.

Birds of Prey may take place in Gotham City, but Batman fans won’t be seeing the Caped Crusader on screen. According to plot details, Batman “has disappeared,” leaving the city a veritable playground for criminals. The Dark Knight’s absence bodes well for criminals like Victor Zsasz (Chris Messina), a known killer in the DC universe.

Production should wrap soon, and Harley Quinn and company will hit theaters on February 7, 2020.