X-Force #1 is as Brutal as Benjamin Percy Promised—If You Read Closely. (Spoiler Review) 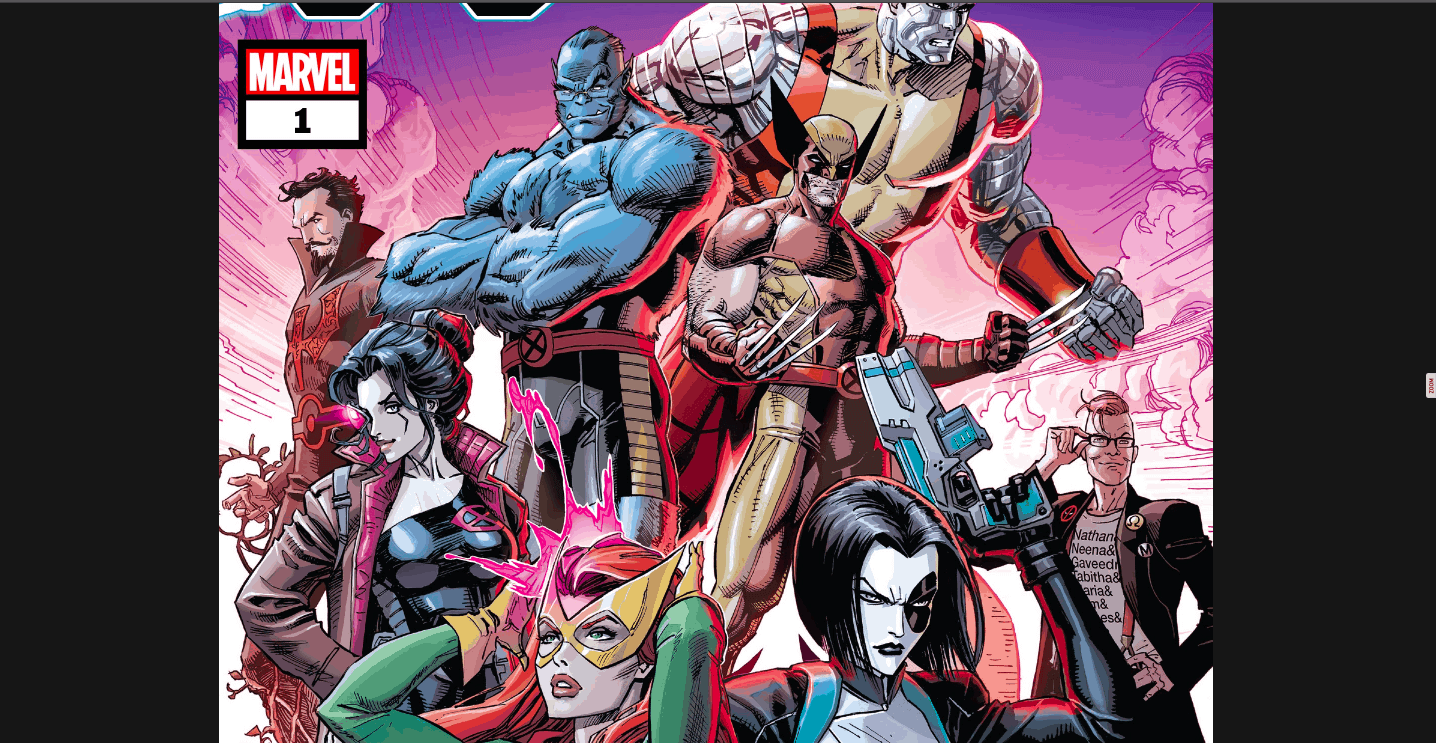 “Bad things happen in the book.” That’s how writer Benjamin Percy described X-Force during the Dawn of X panel in October’s New York Comic-Con. His gruff voice and declaration that this would be the harshest X-Men book got a few chuckles. If you’ve never Percy speak before, his normal voice is what most actors strive for when playing Batman. So, when Percy tells us this incarnation of X-Force will be the CIA/FBI/Black Ops of Krakoa and go to places much darker than any of the other books, it’s easy to believe him, but also easy to think he’s exaggerating. But, well… 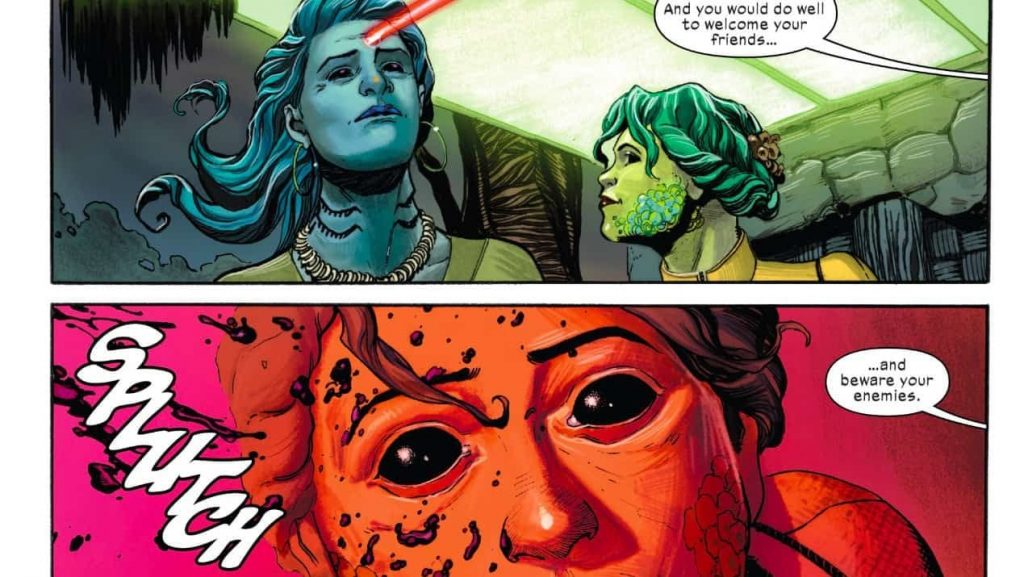 In X-Force #1, Percy Exposes All the Flaws in Professor X’s Plan

In the other X-books, everyone is talking about paradise and how beautiful this new society is. In X-Force, the characters are a little more worried, especially Krakoa’s mutant surveillance team of Black Tom Cassidy and Sage. Despite all the security advances, they see weak spots. The most obvious one, of course, is Kitty Pryde’s ship, which comes home with a lot of mutants who had not yet passed through a Krakoan portal. 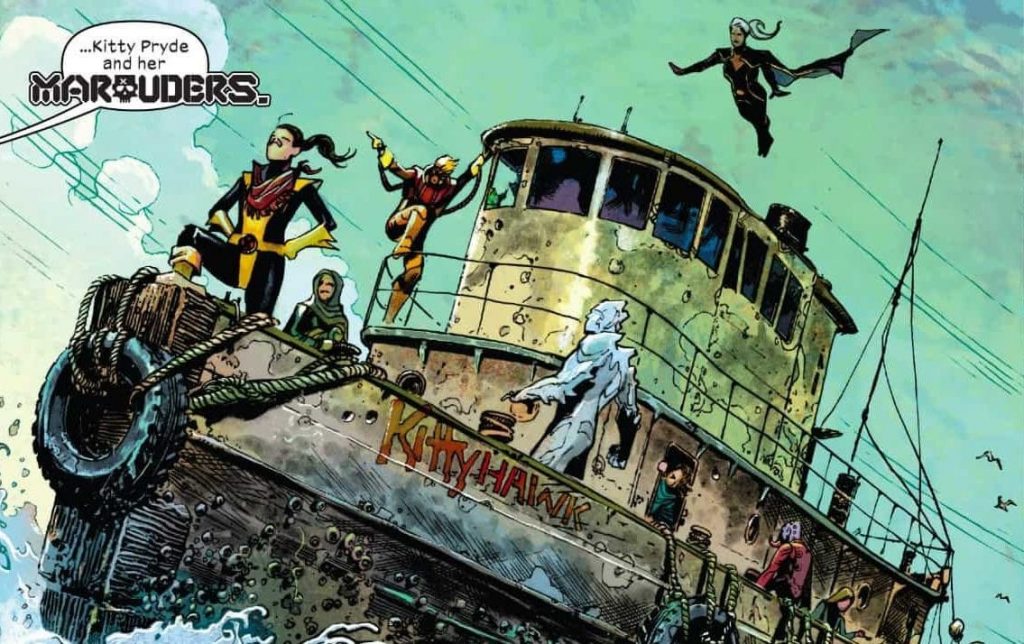 But security isn’t the only problem. And here, we get into seriously big spoilers, so read at your own risk.

Mutants are now immortal. There’s a whole resurrection team led by Hope Summers and powered by Xavier’s telepathy and connection to Cerebro—his new helmet that never leaves his head. The resurrection team brings someone back, and Xavier gives them their minds back. Pretty perfect, right? Sure. Until, at the end of X-Force #1, Percy immediately throws a wrench into the entire system by having Xavier shot in the head. And it’s worse than just having the world’s leading telepath dead. The Cerebro helmet is destroyed. How can they bring back mutants if the mutant who makes them whole is dead? I’m sure we’ll find out soon.

As if Xavier’s assassination wasn’t enough, there’s how it happened. How did a group of human mercenaries get onto the island to begin with? Even if they got past the algae or the atmosphere, Krakoa immediately recognizes every mutant. Well, take a look at this image, really closely: 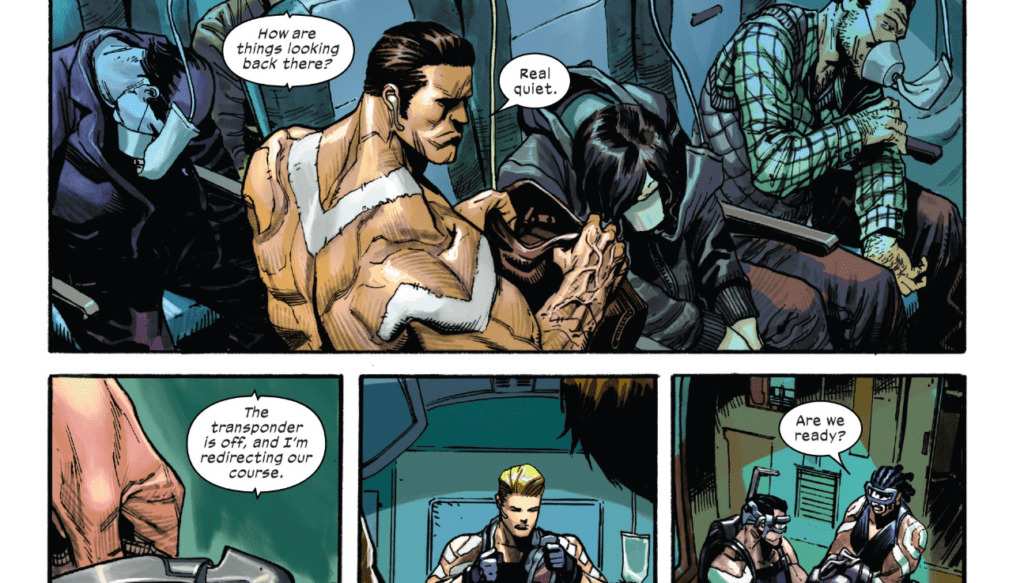 Okay, so this is going to get disturbing fast. Percy doesn’t spell it out for us, but X-Force #1 lays out all the pieces. At the beginning of the issue, Domino is captured while infiltrating a human cult that has psychic-blocking technology. We find out that she’s missing for a week. When the mercenaries arrive, Sage’s security system reads that Domino is dropping from the sky. She’s not. Now, look one more time those mercenaries, up close in personal: 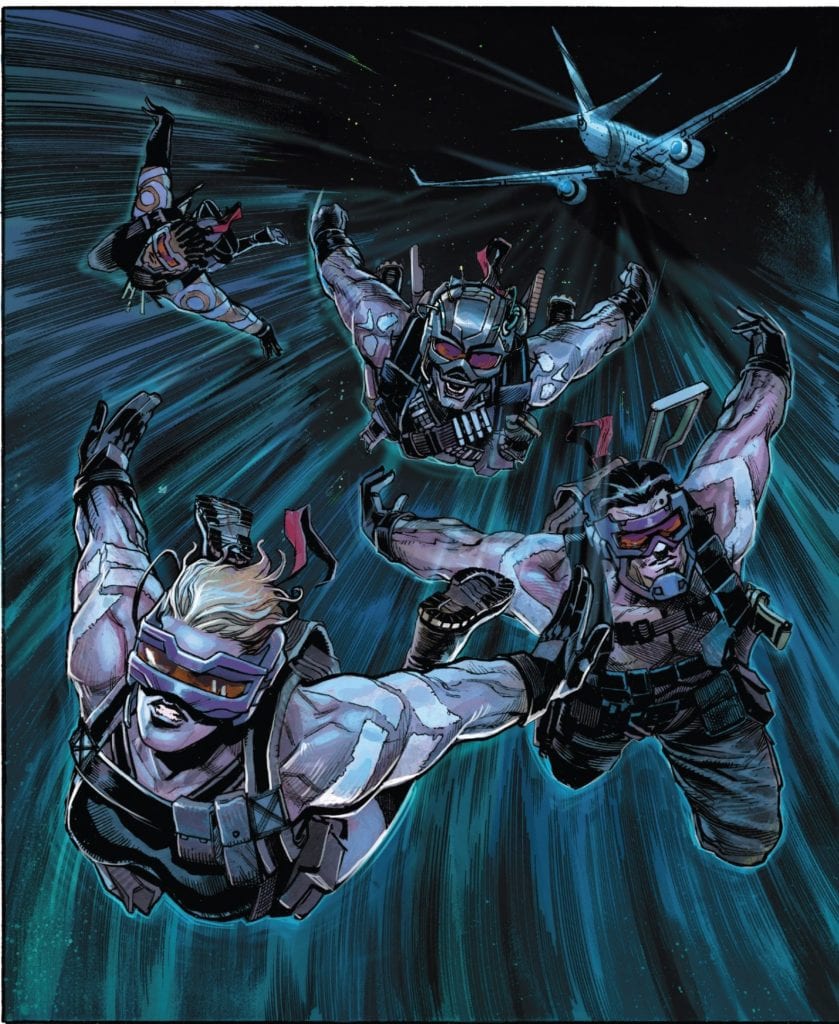 Those white symbols? If you haven’t put it together yet, that’s Domino’s skin. They stitched her skin to their own to fool Krakoa. This is nearly women-in-refrigerators level disturbing, but we know that 1) at some point, they will either save her or resurrect her, and 2) we were warned. Percy told us, bluntly, “bad things happen” in X-Force. He delivered on that promise.

Percy Has a Brilliant Art Team on His Side

I usually forget to mention the art because I’m never entirely sure how to discuss it. This time, Joshua Cassara and Dean White make it easy. The art in X-Force #1 pairs perfectly with what Percy is doing with the script. It’s rough, but also very detailed. It has a texture to it that makes the action pop off the page like gushing, colorful blood: 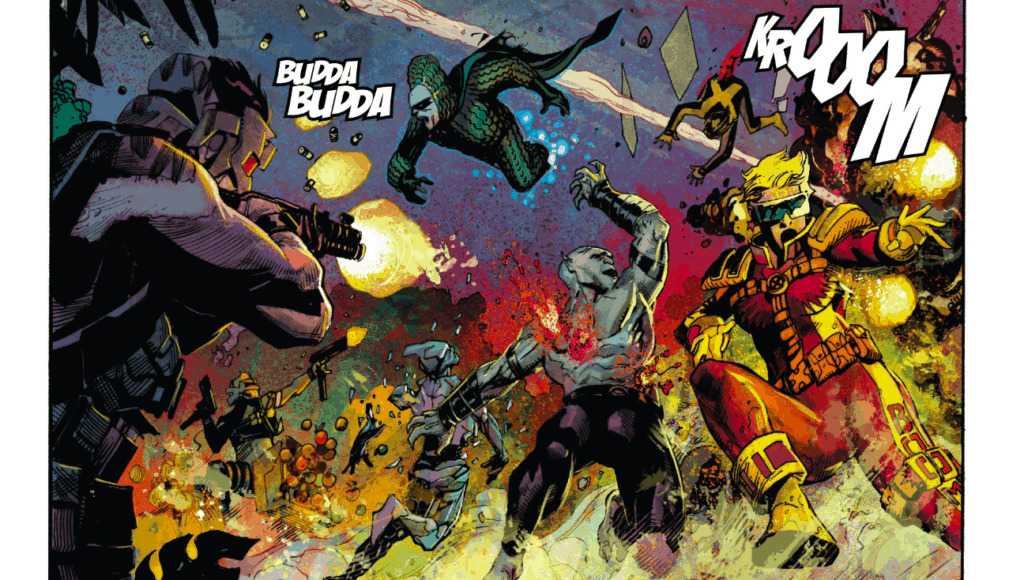 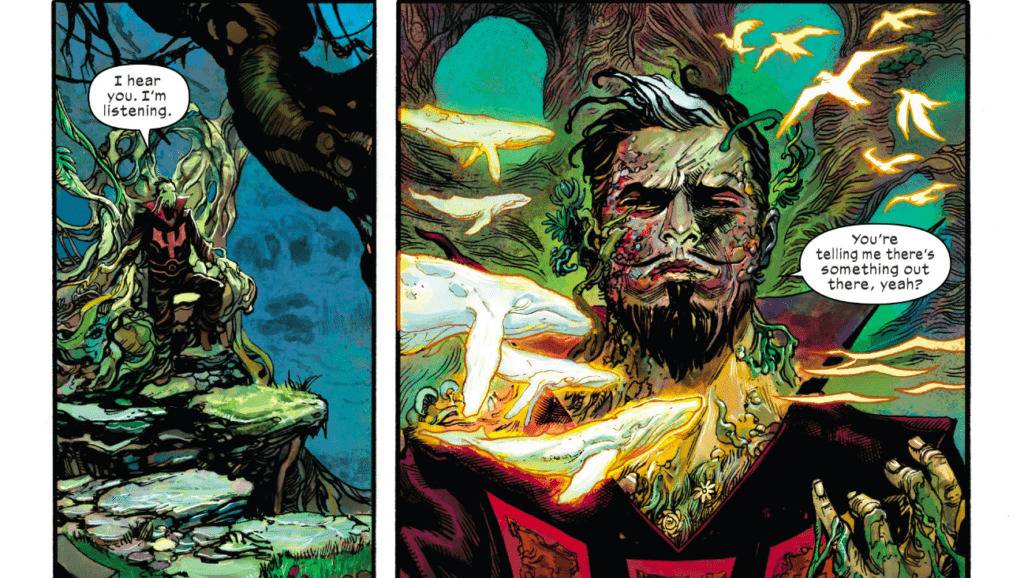 And, my favorite X-Character, Beast: 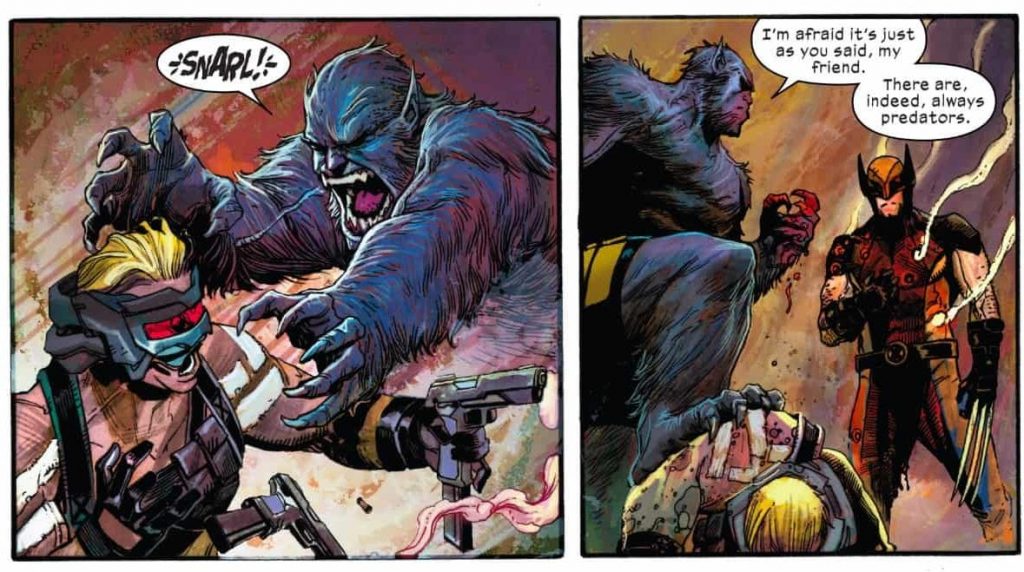 Don’t ever give Beast reason to use violence. (image: X-Force #1, Marvel Comics)

Percy and his team deliver hard with X-Force #1, making it the most pulse-pounding series of Dawn of X yet.

Grade: The stinking genitals of Krakoa! 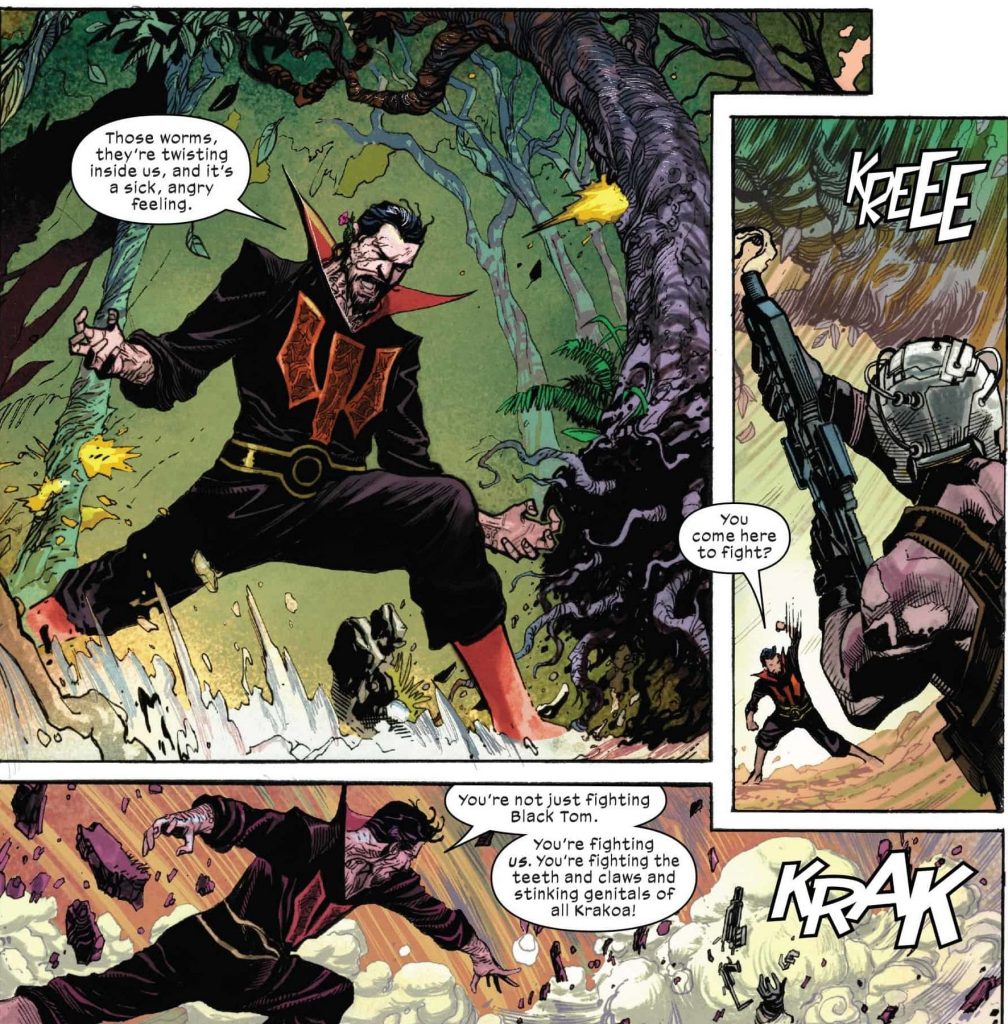