One of the biggest missing pieces in all of the Dawn of X announcements was Moira “X” MacTaggart. She was the catalyst of the House of X and Powers of X, but in the seven books announced so far, we haven’t seen her name come up at all. Well, Jonathan Hickman finally revealed a few details of what we would see for the Live-Die-Repeat mutant.

In House of X #2, Hickman provided a timeline of most of Moira’s lives:

Well, it turns out he had a lot more planned, which is very JRR Tolkien-like. “So, yes, there was going to be a 1000-year timeline in the back of Powers of X #6 explaining all the cool things that happened in that life,” Hickman said during a fan Q&A session on Adventures In Poor Taste. “The reason why this changed in production is because there was a writer we had hoped to get to do our eventual Moira book,” he explained. Hickman went on to describe this book as “dancing between the raindrops” of the X-Men titles.

In this 1000-year timeline, we would have seen the black brain telepaths, along with more Nimrod and Cylobel. Now we’ll see Moira star in those stories in her Dawn of X title. 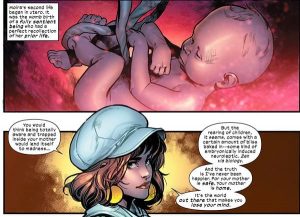 Just a reminder that this happened. Image: House of X #2, Marvel Comics)

Who is Writer X?

But this is all we know so far. X-Men editor Jordan D. White did say, previously, that Vita Ayala and Leah Williams were working on unnamed titles. It’s possible that one of them will be writing—but it could be anyone else too. Regardless, Hickman is excited to have them join Dawn of X, saying “I basically told them what I was planning and asked if they wanted me to not put the timeline in the book (which would lock a lot of plot/story stuff in), and after talking about it, we decided not to stick it in there.”

Are you excited to see more of Moira, or should she have stayed a mysterious background character in Dawn of X?

Arrow Season 8 Premiere Sets Off Final Run By Going Back to the Beginning
Review: Jay and Silent Bob Reboot Gives You Everything You Expect But Will Also Surprise You