The Dawn of X is halfway here, and things start heating up in House of X #3. Literally—the X-Men go to the sun to destroy the Mother Mold. Cyclops puts a team together consisting of some of the greats and some other favorites. Husk, Monet, Mystique, Archangel, and Nightcrawler are among them, along with Cyclops best gal, Jean Grey, and his best bro, Wolverine. They know the risks. They know the importance. They know they’re all appearing in new titles come October (or, at least, we do).

House of X #3: Pepe Larraz and the Pendulum Style

In most of my reviews, I talk more about the writing than I do the art, but I’m going to give Larraz the spotlight here, because his art is great. Larraz has a way of giving us serious moments and lighter moments—sometimes in the same panel. For instance, this brilliant panel with Archangel and Husk: 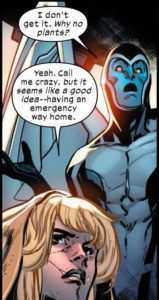 Hickman isn’t the first writer we think of when it comes to humor, but Larraz brings it out of his script in ways that other artists haven’t been able to when working with him. For instance, this great little moment in Sabretooth’s trial: 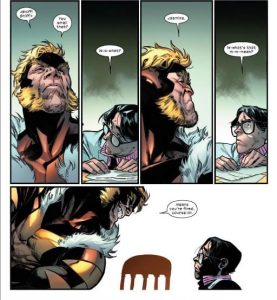 But when it’s time for the epic and dramatic shots, he delivers some gorgeous, memorable images. When the team takes off for their mission, they leave their base on the moon…which is an extension of Krakoa. So, we get this amazing piece: 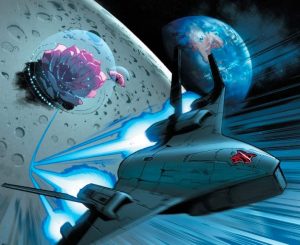 Between House of X #3 and Powers of X #3, we’re now marching towards the end. Just six more weeks before this new dawn of X-Men comics begins. But we all know how the saying goes: The night is darkest just before the dawn. At least we’ll have Silva and Larraz to draw the hell out of that darkness.

Grade: WE FINALLY HAVE AN ALPHABET KEY