Plenty of romantic films have asked you the question of whether you’ve ever loved someone enough that you’d do anything for them. Well, Scott Pilgrim gets someone to prove it. That’s right – just to date a girl that he’s spent minimal time with, young Scott must destroy all of her exes. To prove his love? To prove his dedication? That’s not really the point. Scott Pilgrim, Bryan Lee O’Malley’s series of graphic novels, has created a world where you have to fight for the ones you love. Literally. And it’s not graphic or bloody. Instead, it’s fun, witty, and playful. So, let’s dig into the world of the Scott Pilgrim comics. If you haven’t already read the graphic novel series, you might have just found your next binge-read.

Bryan Lee O’Malley is a cartoonist from London (the Canadian one). His first original work, Lost at Sea, was a graphic novel released by Oni Press back in 2003. It followed Raleigh, a shy teenage girl who thinks that her soul was taken by a cat. It’s quirky, unique, and exactly the type of story that you can imagine coming from the pen of the man who wrote Scott Pilgrim. Oni Press would end up being the publisher for Scott Pilgrim’s tales. All six volumes were released between August 2004 and July 2010, and originally in black and white. They’ve gone on to reach comic fans and casual readers alike all over the world.

So, where did Scott Pilgrim come from? O’Malley cites his inspiration as the 1998 song by the band Plumtree, fittingly called “Scott Pilgrim”. The song hits themes of long-lasting crushes and feels like the indie rock music that O’Malley’s own characters sing. One of the song’s most repeated lines, “I’ve liked you for a thousand years,” springs up the idea of feeling like you’ve liked someone for far longer than they’ve been in your life. And that’s exactly how Scott Pilgrim feels about Ramona Flowers.

So, Who Is Scott Pilgrim Anyway?

If you’re already imagining Michael Cera in your head (who plays the character in the film version), you’re starting from a good place. A lot of graphic novels star super-powered characters who are built to be seen as heroes. Not Scott. He’s an unmotivated, early 20-year-old bass player in a band that only dreams of making it big. He’s certainly not without his faults. Scott is a bit judgemental, doesn’t have the best track record with dating, and relies on his roommate a little too much. But that’s okay – he’s authentic. And that’s a big part of why he’s so enjoyable to read about. 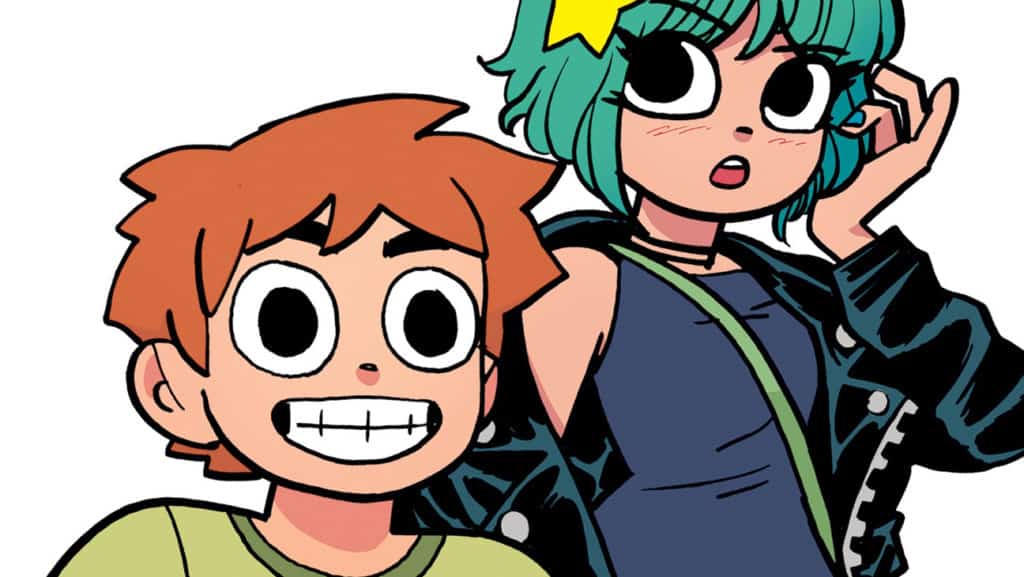 You instantly know that Ramona Flowers is the kind of person that you want to get to know. She exudes coolness, is friendly enough despite her sarcastic, guarded personality, and she’s the new girl in town. She’s got some baggage, portrayed through her ex-partners, a.k.a. the seven evil exes. And, for the sake of the story, she’s automatically deemed intriguing enough for Scott to want to fight for her.

So, More On That Actual Plot

When we meet Scott Pilgrim, he’s just started dating a high-schooler. Knives Chau is instantly obsessed with Scott, and especially his music. Chau quickly becomes one of the fun side-characters, but not without some hardship. Scott falls for Ramona while he’s still with Knives, and “forgets” to properly break up with her before developing a relationship with Ramona. One of Knives’ biggest contribution to the story is how we see Scott’s band, Sex Bob-Omb, through her eyes. She loves them. So, even though we don’t know how well we can trust her judgment, we go along with it.

Immediately after falling for Ramona, Scott begins receiving some mildly threatening letters. Though, he, of course, dismisses them. He’s too love-struck to care about anything getting in the way. However, he quickly learns that this dismissal was a mistake. At a concert, which also forces Scott, Ramona, and Knives in an awkward faces-to-faces confrontation, the first evil ex shows up. Scott confusedly fights him, winning without much strain. He gets a cash prize of less than the cost of a Toronto subway fare and moves on. Nobody seems that confused about the concept of fighting one’s evil exes. Everyone just rolls with it. It especially doesn’t phase Scott, who is more than willing to move forward with the fighting if it means he can keep Ramona.

Scott Pilgrim has a lot more too it than just a young man fighting off the exes of a potential partner. It’s filled with fun side-characters and “side-quest” like interactions. Scott’s backstory is more complicated than you’d think, based on his shy, inexperienced demeanor. As a reader, it’s not just about watching Scott defeat some guys. It’s an exciting, young-adult story that pulls you in because it portrays the lives that everyone has faced as a young adult in a more extreme way. We all have baggage, and Scott Pilgrim and Ramona Flowers’ are there to prove what’s worth fighting for. 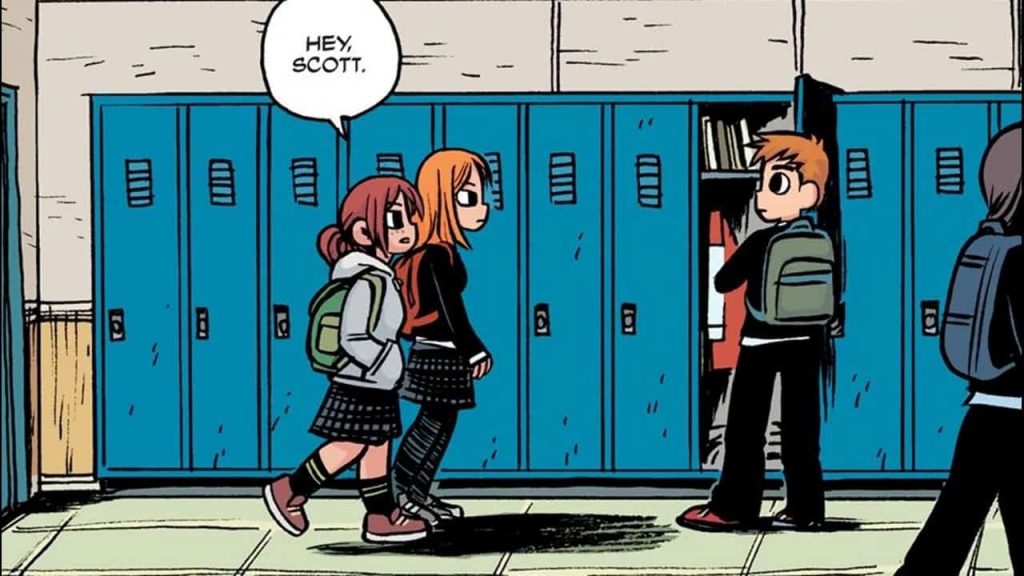 How Scott Pilgrim Becomes A Big Story In A Small Way

Sometimes I wonder if people who live in New York or Paris get tired of movies or books that take place in their hometown. Are they used to it? Or do they get excited to see the streets they walk each day get portrayed in something that’s so widely seen/read? As a Canadian, we don’t get much. Even the movies and shows that are filmed here usually pretend to be taking place somewhere else (the number of times movies try to pretend that Toronto is New York… it’s wild). Well, Scott Pilgrim is very Torontonian. And that’s part of what makes it so endearing. Whether you live in the city or not, the intimate details of the city make you feel like you’re in a real place, looking in on the lives of real people. It helps build a world that makes you feel involved just by reading about it.

There are a lot of references to now-outdated things in Scott Pilgrim. Now, remember that the first one was published in 2004. This makes it both funny and hard to believe when you hear what Ramona’s reason for coming to Toronto in the first place was. She moved all the way to Toronto to be a delivery girl for Amazon. In fact, she’s the only one in Toronto who is delivering for them. More than a decade later, that’s a pretty outdated concept. But it’s those little references that make it even more charming.

There’s a bigger chance that you’ve seen the film adaptation, Scott Pilgrim vs. The World, than there is that you’ve read the graphic novels. They’re both excellent in their own right. However, there’s also plenty more Scott Pilgrim material out there. Scott Pilgrim vs. the Animation, an animated short, was released to provide more backstory for fans. Scott Pilgrim vs. the World: The Game released in 2010. There’s even been a mobile version of the comic that provides more immersion into the world using sounds and vibrations while reading. So, if you end up loving the graphic novels, there’s more for you to consume. And if you prefer reading in color compared to black and white? It’s also been re-released in color just for you!

A Graphic Novel For Everyone

You don’t have to love superhero comics to like Scott Pilgrim. You also don’t need to love Japanese manga. This graphic novel has been said to be a fusion of both the typical American comic book style and the Japanese style. O’Malley states that his interest in the exploration of genres was a big contributor to how Scott Pilgrim became what it is today. It defies typical expectations of a graphic novel while still working as one.

If you’re feeling left without entertainment during this period of social distancing and all the coronavirus related event cancellations everywhere, we think that it’s the perfect time for you to read the Scott Pilgrim comics. You can also check out the film adaptation. Keep an eye out, as we’ll be reviewing that soon, too!

Digital Comics in the time of Coronavirus: To Switch or Not to Switch
HQ Trivia Has Returned To Ease Your Quarantined Soul