It’s been a little while since we’ve seen the World’s Finest in a book together, but Batman/Superman #1 was worth the wait. Writer Joshua Williamson and artist David Marquez bring to life a mystery and dynamic between the friends that has never felt more strained. But following the events of Dark Nights: Metal, it’s no wonder they are having some problems.

The Batman Who Laughs At Batman/Superman

Out of Metal, one of DC’s most terrifying villains emerged: The Batman Who Laughs, a twisted version of Bruce Wayne from the Dark Multiverse, where, after killing Joker, he’s infected and becomes, well, this: 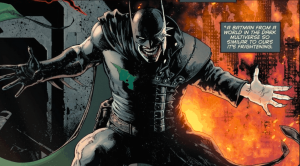 Well, I haven’t had a good nightmare in a while, so thanks DC. (DC Comics)

This is a perfect adversary for a Batman/Superman series, and even though we only see him once in issue #1, his presence is in every panel. The Laughing Bat represents both Batman and Superman’s worst fears for the caped crusader. What if Batman lost control? Could Superman take him down? Would he? Until Metal, this idea was purely hypothetical, but now the manifestation of that fear exists, and the two friends feel the strain of that question.

The art is beautiful, and it’s everything the title needs. It’s a grand and cinematic as a Superman title, as gritty as a Batman title, and just the right amount of darkness for their enemy. But more than that, Marquez gives us one potentially iconic image after another. Like this one:

But what’s even better is when we have the grandiose images of these two titans juxtaposed with Williamson’s internal monologues for these two, which shows just how much they understand each other. 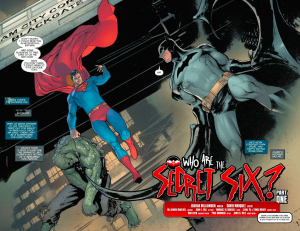 The art alone makes this series worth the subscription.

Williamson Raises the Threat Faster than You Can Say SPOILER

So, Batman/Superman #1 does not end well for the Bat and Superman. The Batman Who Laughs has infected six DC characters, and we see the first victim right away. It’s not a low-level hero, not just a loved one of one of our two leads. We don’t see Alfred or Jimmy Olsen or Nightwing. No—Laughy Batty has his sights much higher.

Yeah. Say hello to the Shazam Who Laughs. 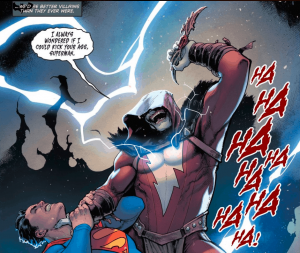 Who is She-Hulk? – Meet a New MCU Hero
History of Gears of War – Hordes of Fun