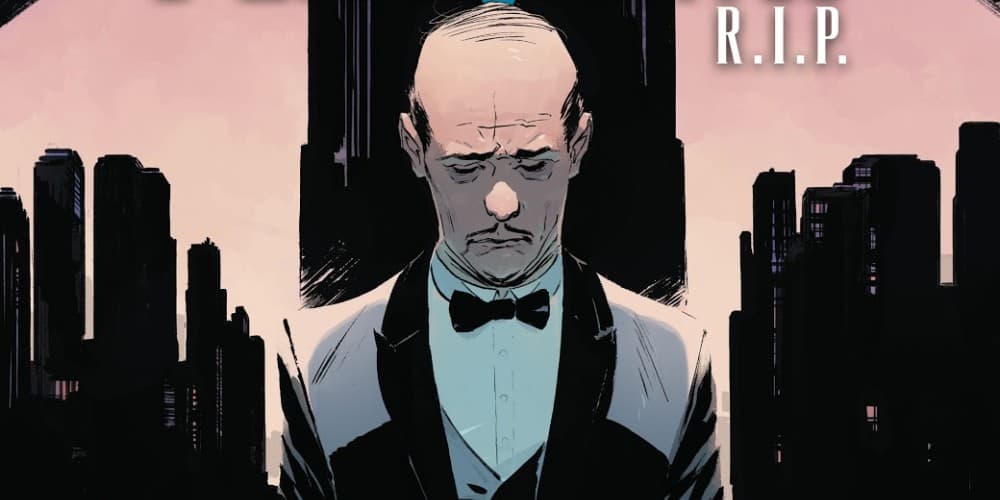 Alfred Pennyworth met such a violent end in Tom King’s City of Bane story line that he might be the only male character to qualify for the “woman in refrigerators” trope. Bane didn’t just snap his neck in front of Damian Wayne, he propped him up at the head of the dining room table for Bruce to find when he finally returned to Gotham. He was halfway through talking to Alfred like it was a regular evening before looking up to see his dead father-figure. As we’ll see in Alfred Pennyworth RIP, the famous butler is the Bat-family. It was always through Alfred’s efforts that the brought the family together through triumph or tragedy. But who can guide them through a tragedy of this magnitude when it’s the person who kept them together that they need to mourn?

It’s not that they think Alfred as a person is replaceable, but the sense of unity he brought the family. Barbara Gordon and Tim Drake expect Bruce Wayne to pick up that role immediately. Barbara especially lashes out at him the most, telling Bruce that he needs to bring them together: 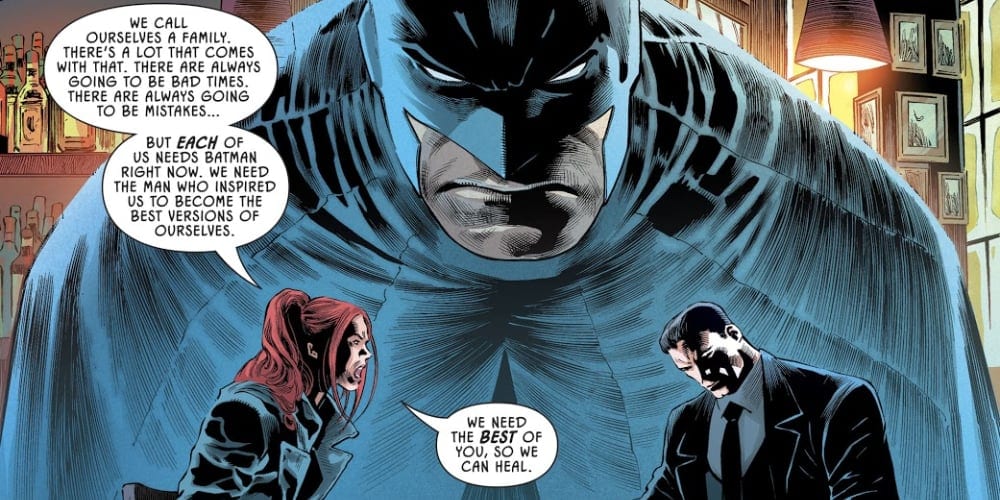 And this is one of the nicer things she says to him. That’s a lot to put on a guy who, essentially, just saw his father murdered…again. But not all members of the Bat-family are as demanding in Alfred Pennyworth: RIP. Oddly, the most understanding is Jason Todd, a sociopath, and “Ric” Grayson, who has no memory of Alfred. Jason flat out says he won’t participate in berating Bruce, but tells Bruce he’ll need to figure it out eventually. And because Dick Grayson lost his memory and can look at things from an outside perspective, he ends up giving Bruce the best advice that evening. When it’s just them, he reminds Bruce that Alfred built the family, and it will take work to restore it—but he doesn’t blame him or rage at him.

The Eulogies of the Bat-Family Makes Alfred Batman—Literally 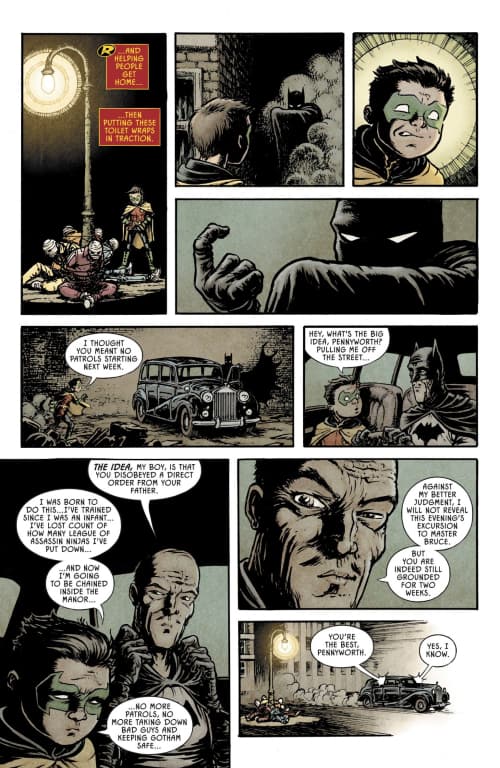 Throughout Alfred Pennyworth: RIP, the Bat-Family recounts their fondest memories of Alfred. Times he helped them, time he taught them lessons, or just times he ate dinner with them. But in each of the Robins’ stories, Jason Todd, Damian Wayne, and Tim Drake, we see Alfred in some form of a Batman role. For Tim Drake, we see a masked Alfred breaking into the GCPD evidence locker to retrieve equipment. For Damian, see the brilliant scene above. But in Jason’s story, we get one of the most bad ass Alfred moments ever: 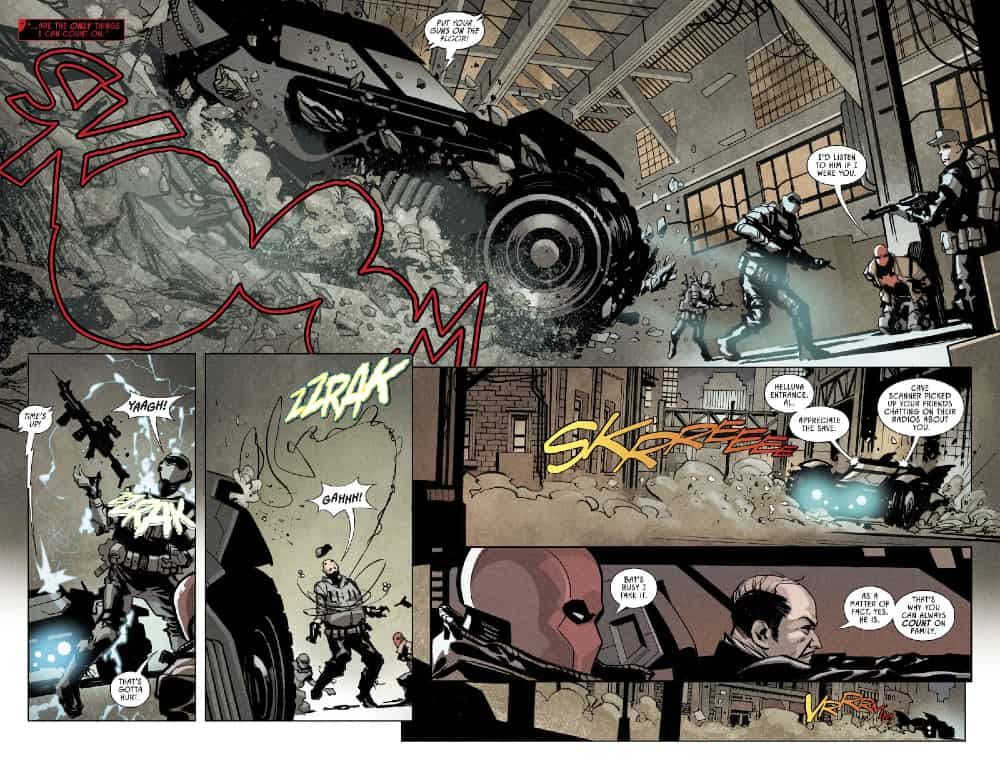 To all three of these characters, Batman was a father figure. By showing Alfred as Batman, we see just how much he was also a father figure to them. By joining Batman, they got two dads.

Alfred Pennyworth: RIP has a Magnificent Art Team, but Not Enough Credit 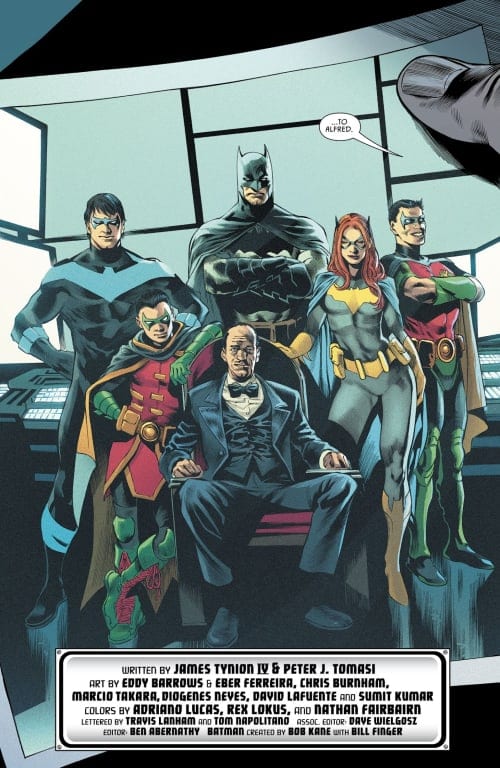 Take a look at the art credits at the bottom of the page above. That is a really great line-up, and the art throughout the comic is beautiful. But DC could have done a little more to highlight their contributions. Throughout Alfred Pennyworth RIP, each Bat-family story has a different artist, and each style captures the tone and character wonderfully. But most comic readers aren’t going to be able to match the nuance of each artist to the name. It would have been very easy for DC to just credit the artists in a way that let the reader know which pages were theirs. Each artist hits just the right tone of somber and joy that these moments need. Of course, that’s also thanks to the team of colorists, Lucas, Lokus, and Fairbarn. The muted tones throughout the comic keeps it grounded.

What Happens to the Bat-Family Now? 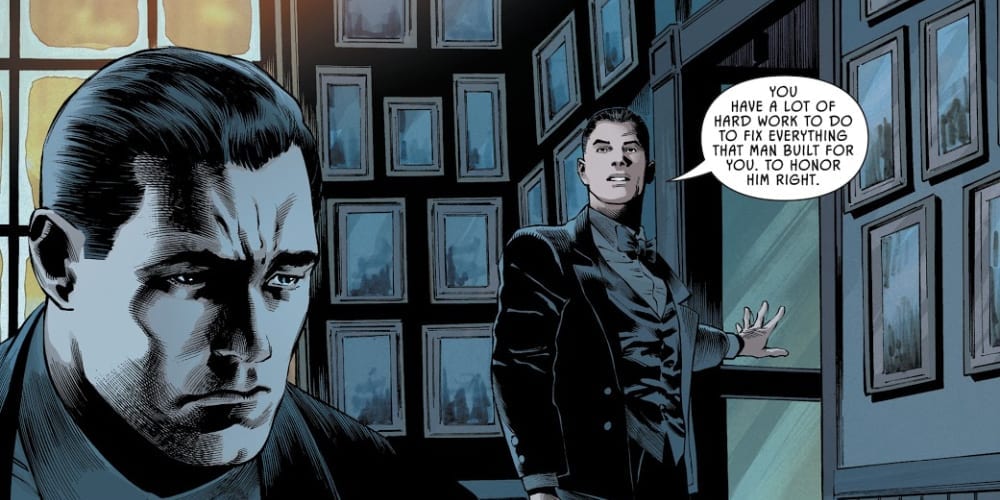 As we get into James Tynion IV’s run on Batman, this is going to be the lingering question. What does Batman’s world look like without Alfred? One thing that Alfred Pennyworth: RIP did very well is show how much the Bat-family replied on Alfred to hold them all together. And yes, Batman is the one who needs to step into that role—but he also needs to grieve. What Grayson does is that he makes Alfred’s ability to bring them together about honoring his legacy. Even without memories, Grayson knew how important this man was to the family. Barbara and the others, Jason Todd included, made it about responsibility. It was Bruce’s responsibility to fill Alfred’s shoes. Grayson knows that’s not something a grieving man can do, so he makes it about Alfred again. It’s a wonderful way to both close the book on Alfred Pennyworth and keep his spirit alive.

Now we have to wait and see for how Batman does honor his mentor, friend, and adopted father. And according to Tom King, Alfred’s death will “have repercussions, huge repercussions going forward.”