There’s Going To Be A Suicide Squad Post Credit Scene

Leading up to the release of any highly-anticipated movie, there are going to be questions. What’s the movie about? How long is it? Are there any dogs? Can I pet the dogs? The curiosity is valid, and in the last few years, one particular question has been asked at the end of pretty much every major movie with a superhero or a Star War. Is there going to be a post credit scene or can I throw away my cup full of soda-flavored water? Most of the time, the answer is yes, and this week is no different and no less exciting because James Gunn confirmed that there will be a Suicide Squad post credit scene.

Post credit scenes tend to have a certain flavor, and that flavor suits a purpose. Movies that know they’re part of a franchise before they’ve ever seen the screen are what really started making post credit scenes popular. They’ve been around for a while, but it’s mostly in the last decade or so that they’ve been getting a lot of attention, but why is that? What do they do?

Some post-credit sequences, like the one at the end of Thor: Ragnorok add something to the story, but they also subvert in a way that’s for your eyes only because you were clever enough to stay in the theater:  “Asgard is saved! Oh, wait no, Asgard is doomed.” Others give you something fresh and new, a strong flavor to keep the next movie minty fresh in your mind. The term “Post credit scene” takes a while to say, but so does additive subverting eye mint. If we’re going to be talking about this for decades more, maybe we can just abbreviate it to something simple like add-vert-eyes-mints. Or maybe we’ll just stick to post-credit scene.

Post-credit scenes have historically been a gift. They leave us with some tantalizing detail about another part of the franchise (pretty much any Marvel movie), add some bonkers detail to the movie you just watched (Wonder Woman 1984), or give you a change of tone or a note of humor to leave the theater on (Dude, Where’s My Car, that movie with Ashton Kutcher that was the pinnacle of late 90s and early 2000s slapstick stoner humor). To summarize, they get you feeling some strong emotion that you can leave the theater with.

Yes, but What’s The Post Credit Scene For Suicide Squad Going to Be About

We don’t know, but the fun part isn’t knowing. The fun part is guessing! These scenes are there to get you leaving the theater with one last really tasty flavor of film that you can talk about even after you’ve finished talking about the rest of the movie. It’s a question movies want you to try to answer, but nobody who isn’t involved in the creation of Suicide Squad has seen enough of the movie to make a good guess for what a post credit scene would be about. So here are some bad ones.

Henry Cavill is sitting in front of a computer writing up a story about the chaotic heroics of these lovable villains. Off-screen, Lois Lane calls the name “Clark,” and the screen goes black. No, too predictable. It’s King Shark getting a phone call. It’s his son, Taylor Lautner. The reunion will be planned for 6 seasons and a movie and get cancelled after 3. Plausible but not likely. No, post credit sequences are there to build hype, to give us something to latch onto but also to speculate wildly about. It’s going to be a crossover. Peacemaker and Bloodsport are in their cells, a window in the air next to Bloodsport opens, out walks Owen Wilson and Tom Hiddleson. This is a multiverse crossover preview of the next episode of Loki. 2 seconds later, the scene ends. Or it’s just Robert Pattinson’s Batman opening his eyes dramatically. Probably that, honestly. 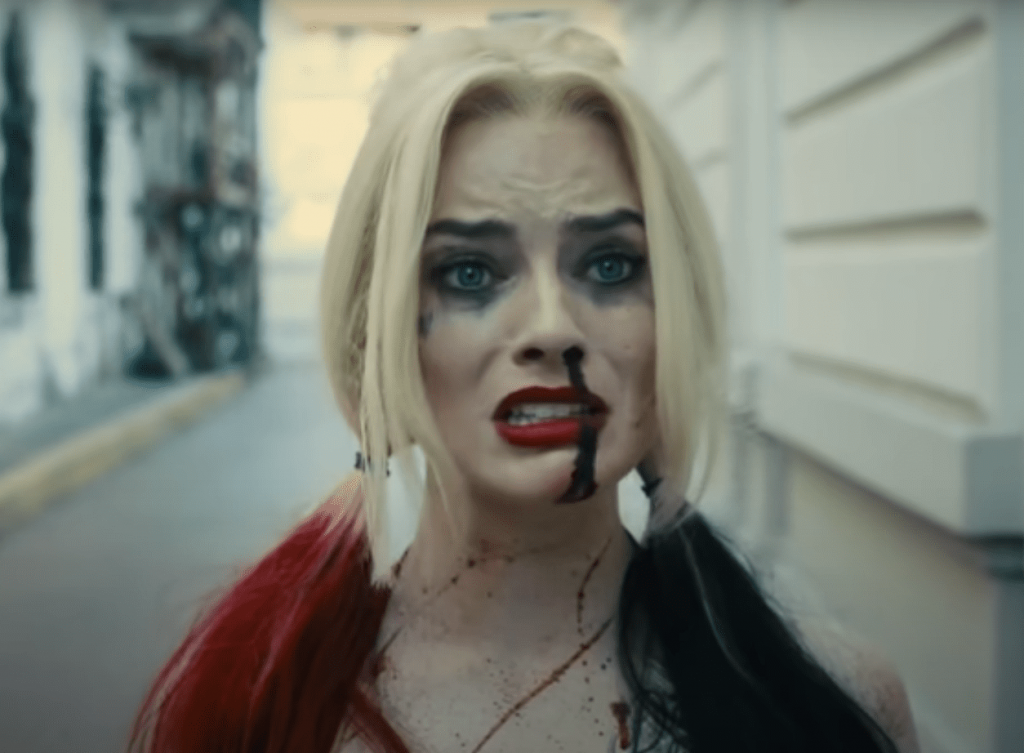 If we want to speculate about the rest of the movie, which Gunn confirmed is going to be 2 hours and 12 minutes long, we can mostly say it looks sick. Both Guardians of the Galaxy movies captured a similar kind of chaotic humor that seems like it’s going to work great for Suicide Squad. And he also wrote Super, that shockingly good take on superheroes with Rainn Wilson that managed to blend indulgent violence with genuine criticism of the idea of superheroes. This movie is going to be cool, just hold tight and think of Mister J.

How do you feel about post credit scenes? Do you stay in the theater to watch them, or do you just look them up online later? Tell us about it before you throw out your popcorn bag!